Bovine Virus Diarrhoea Virus (BVDV) is a viral disease of cattle that causes reproductive losses and a range of other disease syndromes in cattle.

The costs of reproductive failure and production losses can be very high and many countries have introduced eradication schemes for the virus with varying success. In the UK industry led eradication programmes are being run on a regional basis. The one in Scotland, running since 2010 with government support has seen a reduction in the number of exposed animals from 40% to around 15% as of 2017.

Major financial losses result where infection is introduced into a group of susceptible breeding cattle resulting in poor reproductive performance and the birth of calves with persistent virus infection.  While elimination of infection from the herd is optimal, vaccination is highly effective and produces a substantial cost benefits. 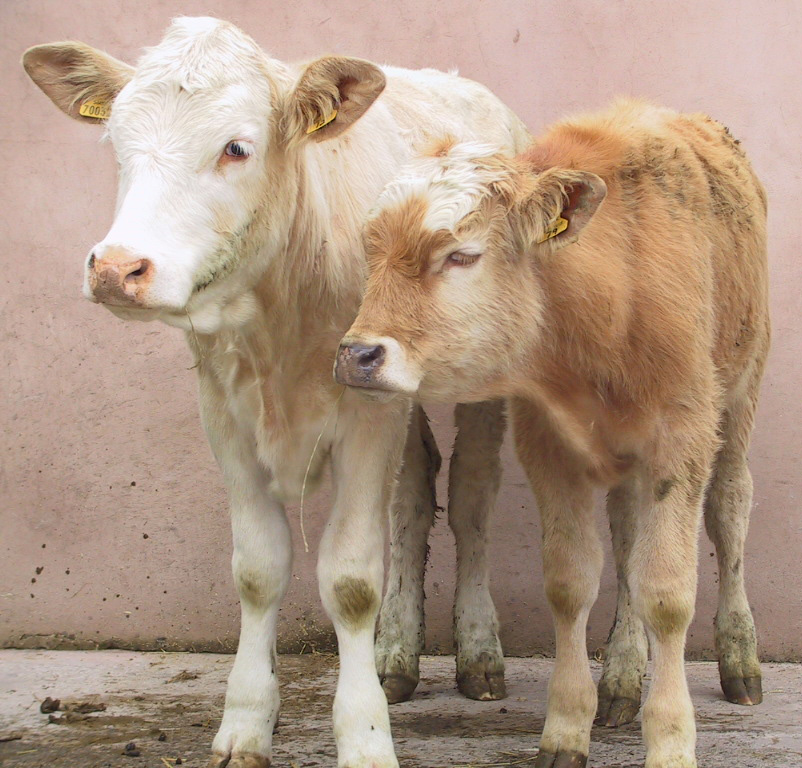 Strict biosecurity measures and a robust herd health plan are essential to prevent introduction of BVDV into a herd once it has been eliminated. Effective biocontainment measures are essential on those farms with active infection to reduce the costs of BVD and to, eventually, eradicate BVDV from the herd.

The virus is contracted from contact with infected cattle, it is also readily sexually transmitted. Those animals infected as adults usually recover from the virus and become immune. BVDV is however readily transmitted across the placenta from cow to calf. Animals that are infected in-utero are born permanently (persistently) infected with the virus. These animals excrete large volumes of virus all of their lives and are the main route of infections in other animals.  Identifying and removing these animals is the mainstay of eradication schemes for the BVDV. It needs only one persistently infected animal to be introduced into a susceptible herd to cause very significant financial losses

Cattle exposed to BVD virus may show few clinical signs, producing protective antibodies within three to four weeks. In some situations, BVD virus infection may temporarily lower immunity to other infectious diseases exacerbating these clinical infections particularly in young calves. Despite its name diarrhoea is not often seen. 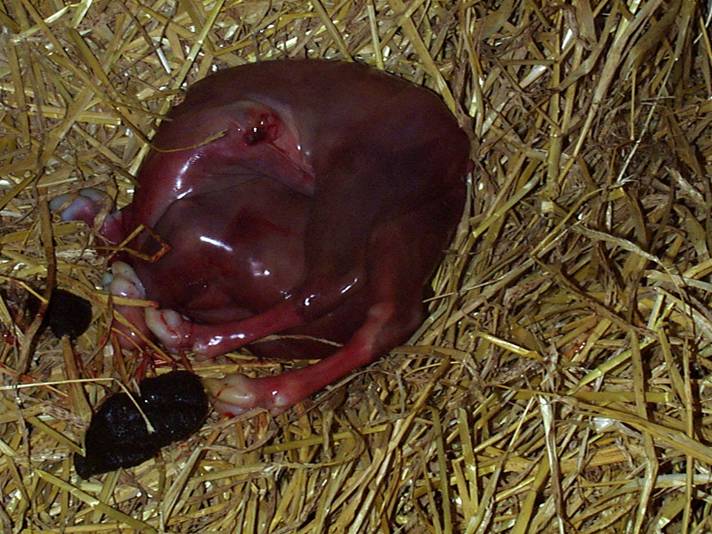 Infection of the foetus before 110/120 days of pregnancy results in the birth of a live calf but persistently infected (animal carries the virus for life).  This is caused by failure of the developing immune system of the foetus to function properly before 110 days.

Persistently infected (PI animals) typically fail to thrive and will be noticeably smaller and less healthy than their age cohort. Virus infection may also lead to various defects of the developing foetus' eyes and brain. These calves may be born blind and lack co-ordination. These calves should be culled for welfare reasons, as well as being a source of infection. 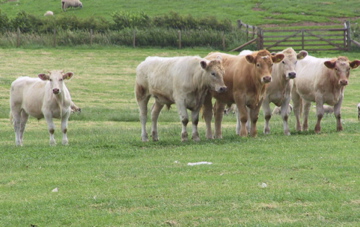 BVD virus during pregnancy may cause: 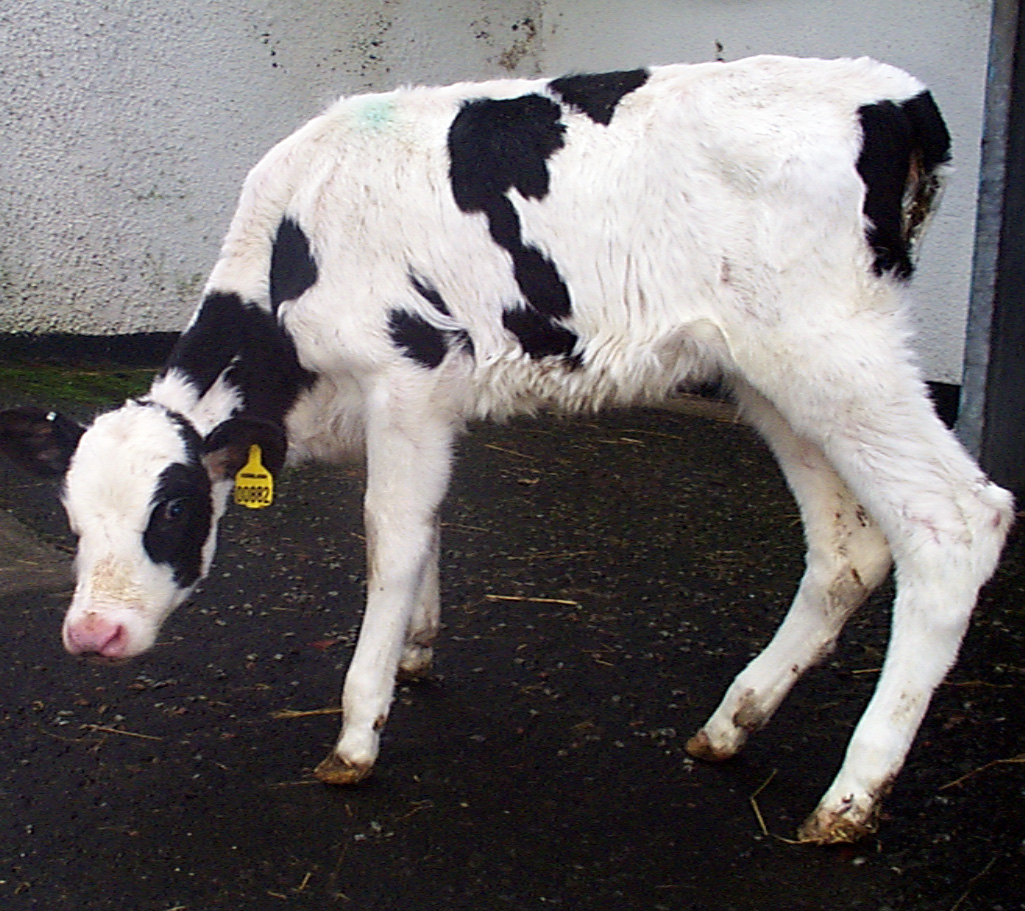 Fig 4 Birth defects of the nervous system.  Note the low head carriage and wide stance.  This calf was also very unsteady on its feet. 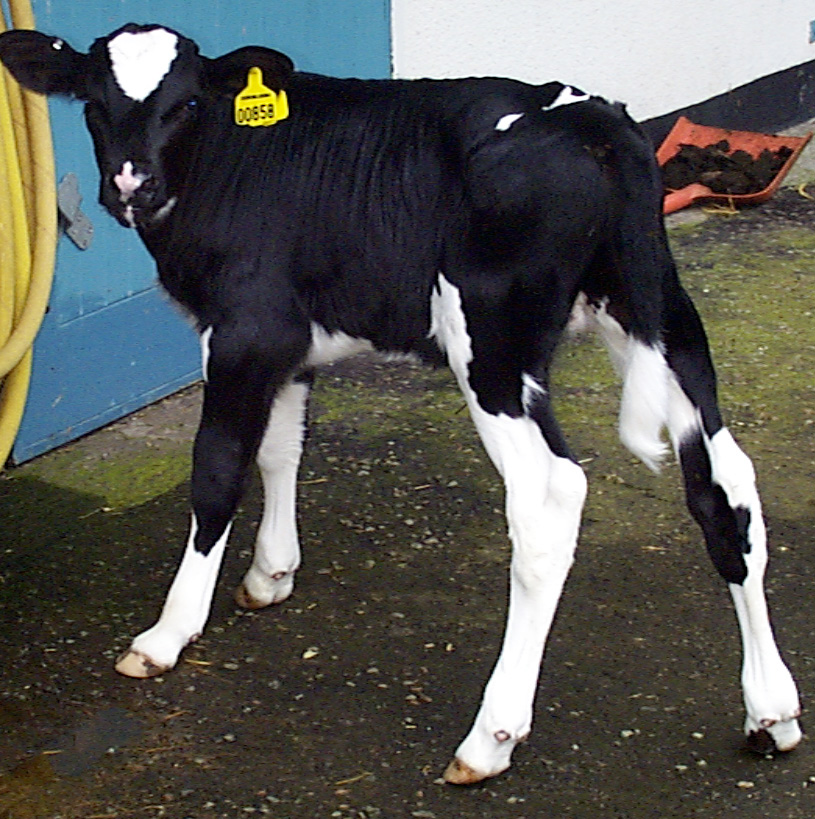 Virus infection after 150 days gestation usually has little effect with live calves born at full term.  Abortion can occur following infection at any stage of pregnancy but this is not common. 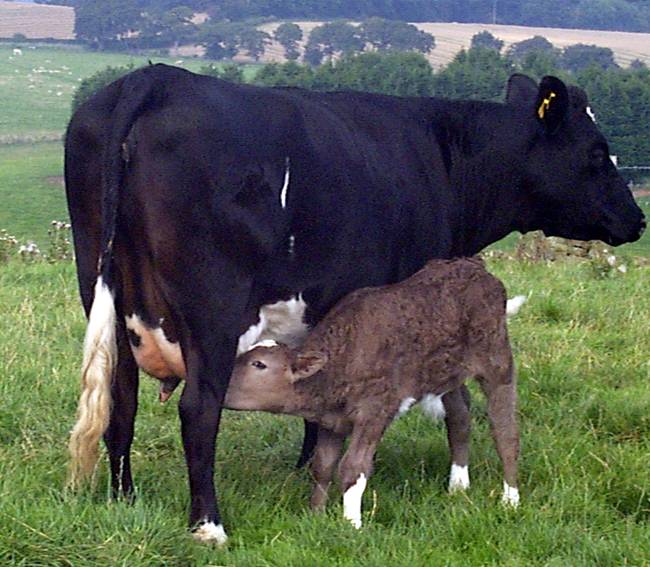 BVD virus can be spread in semen of persistently infected bulls or in bulls experiencing acute BVD with transient virus infection. BVDV will lead to low pregnancy rate due to embryonic death or later foetal death/abortion.  Bulls are vigorously tested for BVD before entering AI studs. Testing for BVDV is essential for all purchased bulls prior to their use on farm. 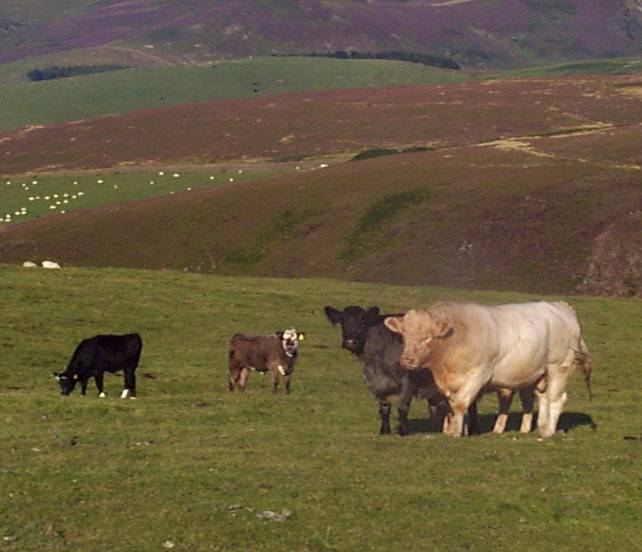 Fig 7 BVD virus can be spread in semen of persistently infected bulls or in bulls experiencing acute BVD with transient virus infection. 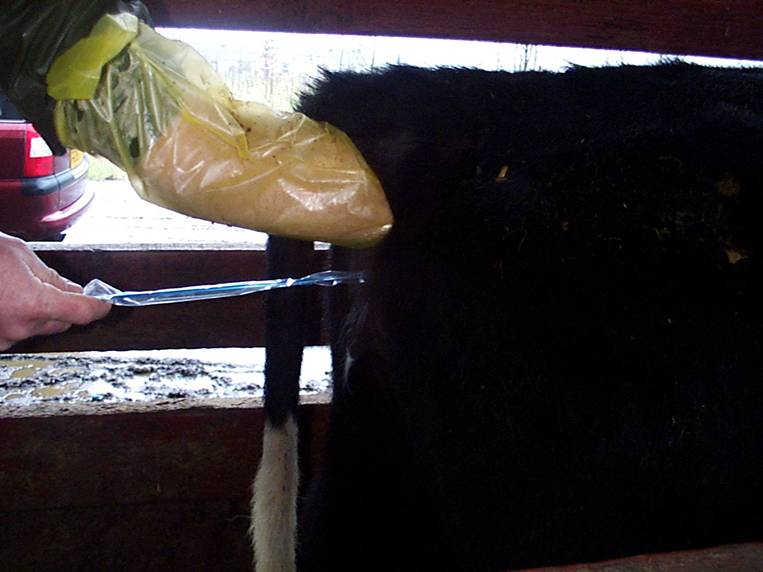 Mucosal disease occurs when persistently infected animals become superinfected with cytopathic BVD virus.  The cytopathic BVD virus usually arises from changes in the BVD virus within the PI animal.  Mucosal disease is most commonly seen in 6 to 12 month-old calves, and is usually seen as sudden onset depression, fever and anorexia, with excess salivation.  Ulcers appear in the mouth and on the muzzle. There are purulent discharges from the eyes and nostrils. There is profuse diarrhoea with shreds of gut mucosa/blood present during the terminal stages.  There is rapid weight loss followed by death within 5-10 days.

Exposure to the virus can be diagnosed by serology. Active infection (either acute or PI) can be diagnosed by PCR based tests. Many different types of samples can be used for BVDV testing including blood, hair plucks and skin biopsies. The current eradication schemes in the UK use skin plugs created when juvenile animals are ear tagged for identification for detection of PI animals. 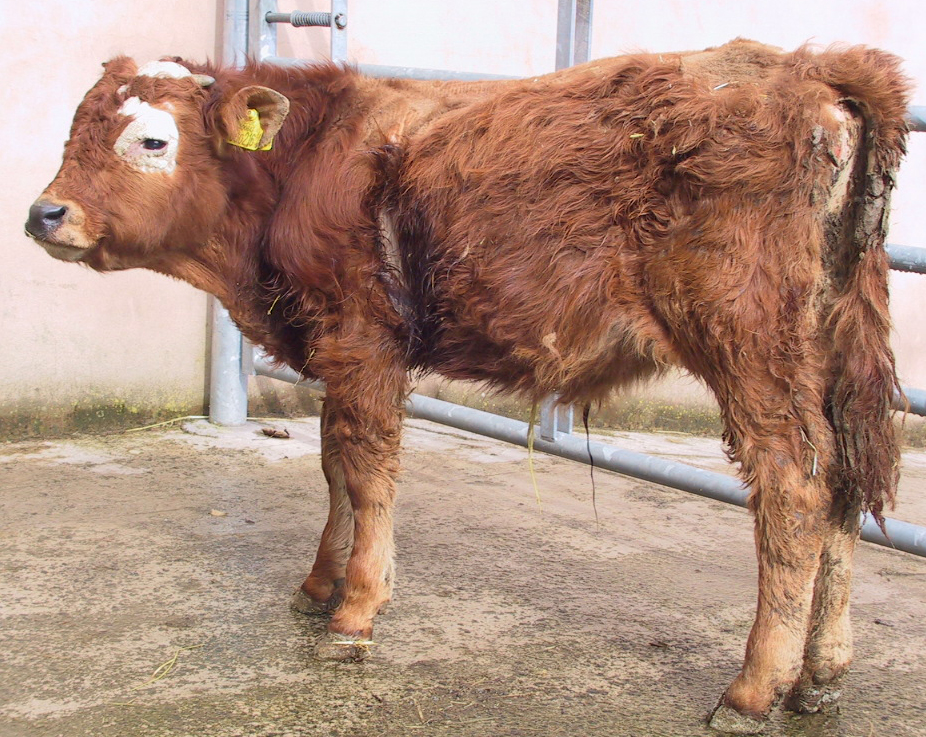 Acute BVD - treatment of any concurrent infections if present.

Persistent infection - Such cattle have often been treated several times for digestive and respiratory infections. PI animals should be disposed of immediately as they act as a source of BVD infection.  It is not possible to clear the virus from these animals. Mucosal disease in PI animals is always fatal. 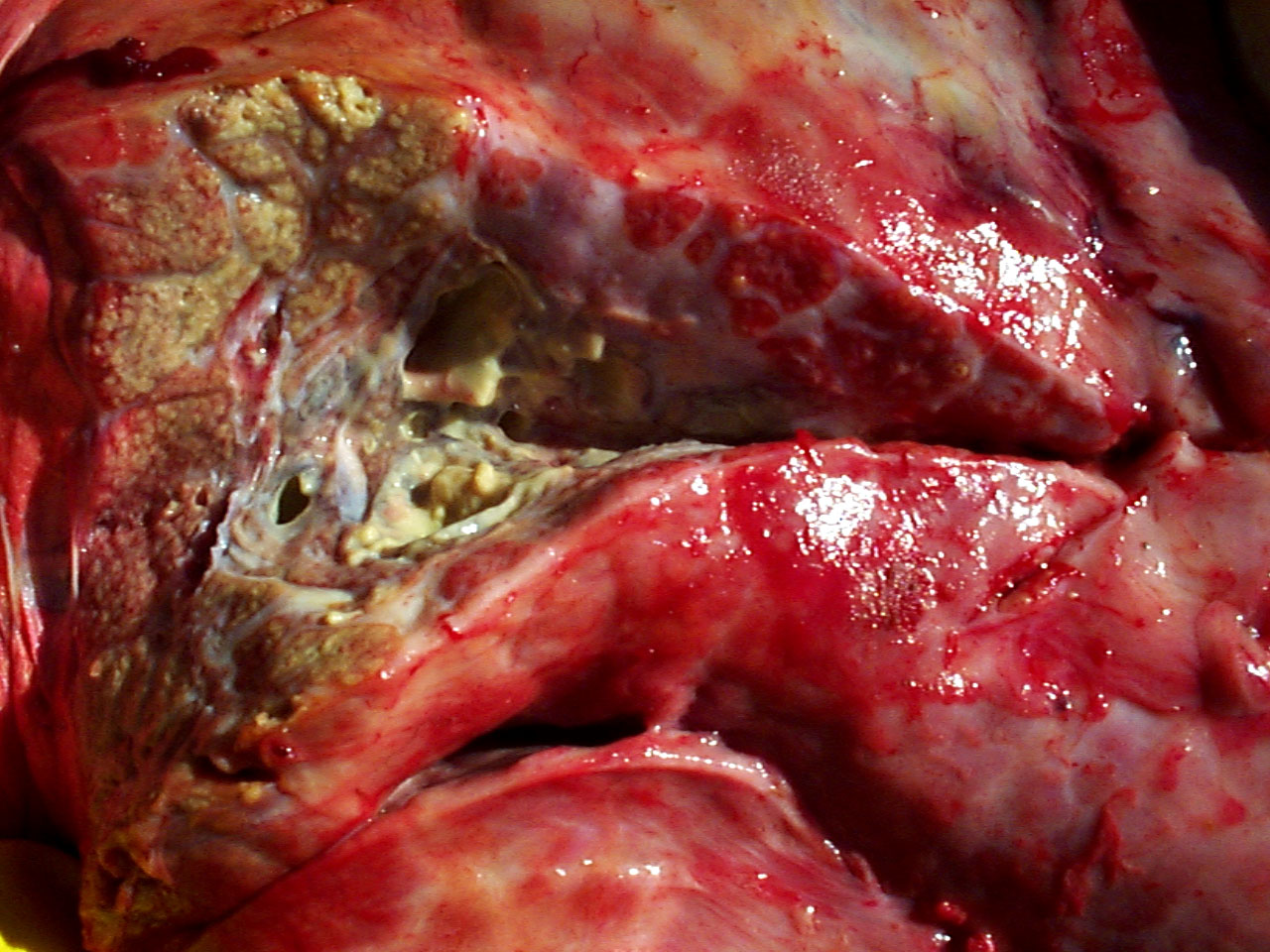 Key Principles of Biocontainment which will lead to eradication 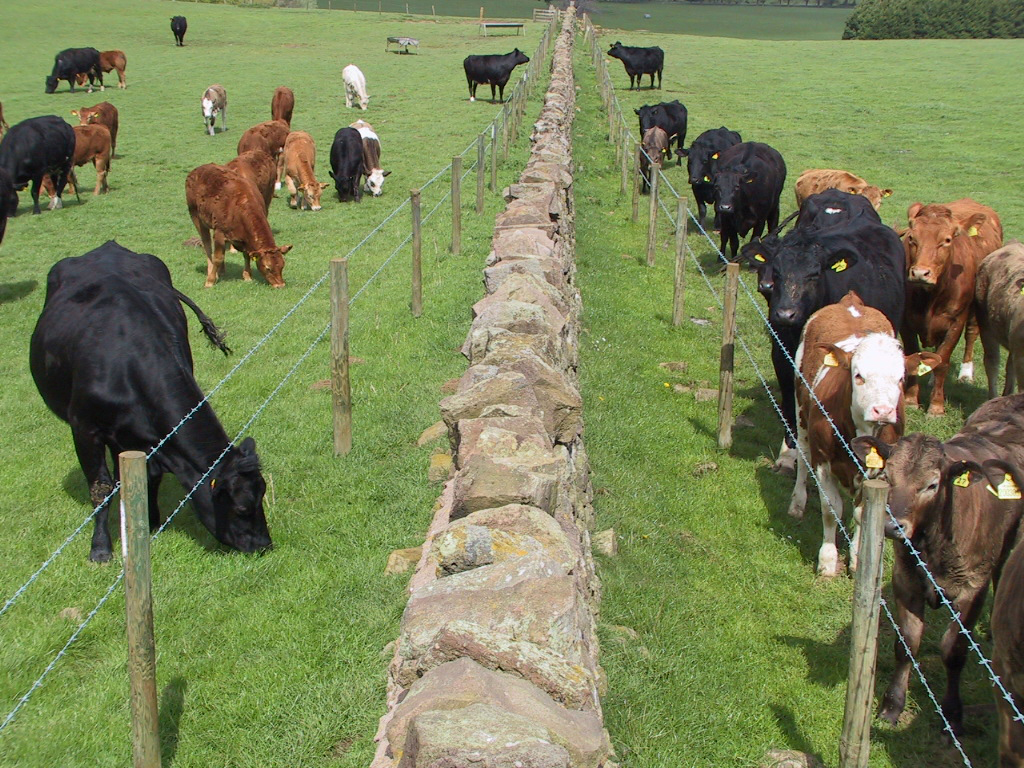 Many herds have BVDV present within their cattle where disease/losses are partly controlled by PI calves acting as "natural vaccinators" of the herd. When most adult animals in the herd are immune disease losses are not so obvious to the farmer.  However, this situation is not optimum as losses can be catastrophic if naïve breeding females are introduced into the herd.

Various BVD vaccines are available in the UK, requiring either a single dose or two dose primary course. All must have the primary course completed prior to first service, with a variable time between doses and variable time from completion of the course to bulling depending on the vaccine used (See product SPC's for details). All require regular boosters to maintain immunity which should be given in accordance with the SPC recommendations (recommendations vary depending on the vaccine used). Animals should be healthy when vaccinated to allow an appropriate immune response, but if all breeding females are properly vaccinated this will help to control the disease by preventing BVD infection of the developing foetus during pregnancy and production of PI calves.

BVD eradication is possible following whole herd blood testing and elimination of all PI carrier animals.  If farmers go for eradication then strict herd biosecurity measures must be maintained to prevent re-introduction of virus infection as the herd will soon become naïve and therefore fully susceptible to infection. The national schemes in operation in the UK rely on detection of PI animals in young stock and restrictions on sale and movement of these animals.

Cattle with mucosal disease must be euthanased immediately upon diagnosis.  Calves born with eye and brain defects, due to virus infection during their development, should also be culled.

Details on the eradication schemes in operation within the different regions of the UK are below:

The Scottish Government is supporting an ambitious industry-led scheme to eradicate BVD from Scotland.  This has been developed in a partnership including representatives of the livestock industry, veterinary profession, science sector and government.

BVDFree England is a voluntary industry-led scheme, working to eliminate Bovine Viral Diarrhoea (BVD) from all cattle in England by 2022. The key to success is to identify and remove all animals persistently infected (PI) with the BVD virus from the English cattle herd.

If you are a beef or dairy farmer in Wales there is free BVD screening available and subsequent funding for a PI hunt if needed. Click on the link to find out more.