Between August and October 2011, outbreaks of disease in adult cattle causing mild to moderate fever, reduced milk yield, loss of appetite, loss of body condition and diarrhoea were reported in both the Netherlands and Germany.

Testing for common causes of diarrhoea proved negative. From December 2011, abortion and stillbirths associated with foetal abnormalities, affecting mainly sheep but also cattle and goats, were identified in the Netherlands, Germany and Belgium.  A new virus was identified in November 2011 as the cause of both conditions. This was named 'Schmallenberg virus' (SBV) after the German town where the virus was first identified. The virus probably originated in the Middle East where a variety of very similar viruses are present.

Schmallenberg virus is in the Simbu serogroup of the Orthobunyavirus group. This group of viruses includes many different viruses which occur in Asia, Africa and Australia, but had not previously been identified in Europe.  Schmallenberg Virus is similar to some other animal disease pathogens including Akabane and Shamonda viruses, which are transmitted by biting midges. Schmallenberg virus can infect and has been shown to cause disease in sheep, cattle and goats. It has also been detected in a variety of other ruminants (including llama and many species of deer, but disease has not been reported in these animals and it isn't clear what role they play in virus spread and maintenance in the environment.

Schmallenberg is spread by Culicoides sp midges of the obsoletus complex.  It does not spread directly from animal to animal,  Its spread is closely linked to the numbers of midges, which typically peak in late summer/early autumn (August/September) and drop sharply once frosts begin.  Some transmission does occur over winter when midge numbers are low but it is very reduced.  Some bulls excrete virus in their semen after infection (it is not known how long for) though sexual transmission has not been demonstrated. Schmallenberg virus has not been found in ram or buck semen so far.

Disease in the UK

In the initial outbreak in 2012/13 the virus likely arrived in the UK with windblown midges in south eastern counties and then spread inland and north.  At the end of 2013 the APHA had confirmed virus infection on 656 holdings, though subsequent serology testing indicated that all areas of the UK below the Scottish borders had been exposed, with 25- 75% of animals having antibodies to the virus (depending on county).  Individual herd or flock losses of neonates due to Schmallenberg vary but on average SBV affected flocks report an extra 3% lamb mortality than those flocks not affected. Some  flocks however experience 50-60% losses due to SBV. Following the initial outbreak, sheep born in 2014/15 in southern counties did not seroconvert to the virus at all, indicating that the virus did not circulate in those years. As a consequence total herd immunity dropped.

This created the conditions for a re-emergence of the virus and in 2016-17 Schmallenberg clinical cases began being reported in large numbers again in the UK. Regional updates on SBV are provided on the Government Vet Gateway (http://ahvla.defra.gov.uk/vet-gateway/schmallenberg/index.htm). The APHA confirmed SBV lambs on 139 premises in England and Wales in 2016/17, and on nine premises in southern counties of Scotland. Numbers affected are likely much higher than reported as less than 30% of affected lambs will still test positive for virus at birth.  Seroconversion of Scottish dairy herds over summer and autumn 2017 would indicate that the virus has actively circulated in the 2017-18 breeding season and further deformities can be expected in 2018.

This scenario of years with large outbreaks and then years with little circulation is likely to continue. Experience with Akabane virus (which is very similar to Schmallenberg) in Japan has shown that large outbreaks tend to occur every 3-5 years. The risk will be higher in warm years with high midge numbers and in years where the national herd seroprevalence (previous exposure) is low.

The biggest problem with the virus is however that it crosses the placenta to affect the growing fetus in pregnant animals.  The most susceptible stages of pregnancy for fetal deformities are days 62-180 in cattle and 25-50 in sheep (older fetuses can clear the virus themselves).  Effects on early stages of pregnancy are not clear at this stage. The virus damages fetal nerve tissue and results in brain and spinal cord abnormalities with secondary problems with the muscles and skeleton leading from the nerve damage.

In newborn animals and fetal sheep, goats and cattle, the disease is associated with animals born alive or dead at term or aborted following infection of the dam. Malformations observed include bent limbs and fixed joints, which may be all limbs and spine or only some limbs or joints, brain deformities (hydraencephaly) and damage to the spinal cord. Persistent flexion/fusion of the joints (arthrogryposis or "contracted tendons") is a very common birth defect with Schmallenberg virus.  Some animals are born with a normal appearance but have nervous signs such as a 'dummy' presentation (blindness, ataxia, recumbency, an inability to suck, and sometimes seizures). The fetal deformities vary depending on when infection occurred during pregnancy.  In sheep there may be only one lamb out of a multiple birth affected with the others normal.

It's also important to remember that not all birth defects are due to Schmallenberg virus. Arthrogryposis can also be inherited as an autosomal recessive condition and some of the neurological problems could be confused with congenital Border disease (hairy shakers) or BVDV affected calves, hence veterinary investigation is essential. Abnormalities such as extra or missing body parts (heads, limbs) or abnormalities of the internal organs (heart, lungs, liver, kidney, guts) or genitals are not due to Schmallenberg Virus.

Malformations affecting lambs and calves exposed to the virus in pregnancy may lead to lambing or calving difficulties. Excessive force must not be used during lambing or calving as this may risk injury to both the ewe and lamb or cow and calf. Farmers should contact their veterinary surgeon because a caesarean operation may be necessary for safe delivery. These caesareans are likely to be more difficult than usual due to the nature of the deformities.  Lambs or cavles delivered alive with severe deformities must be euthanased for welfare reasons. 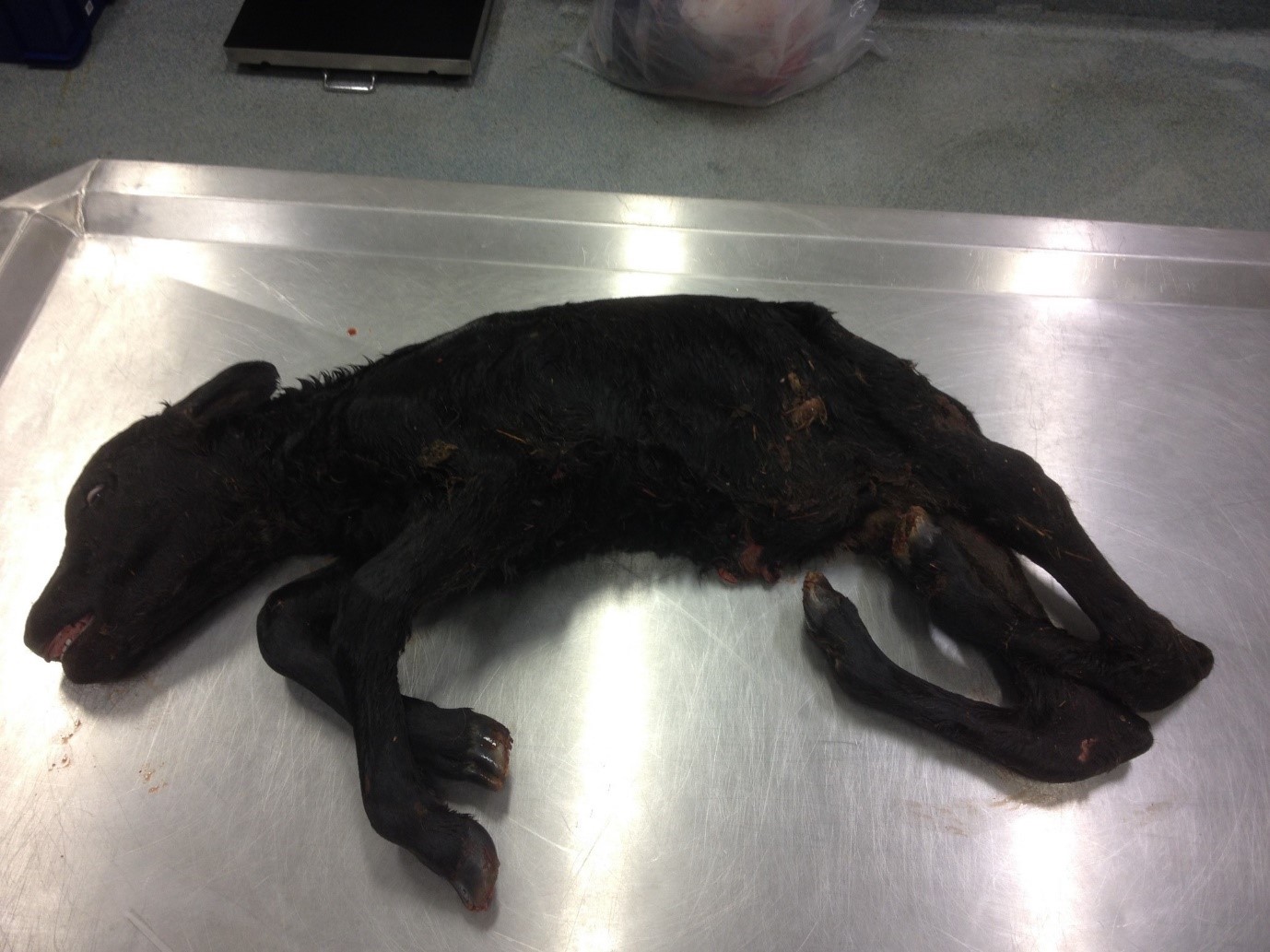 While several vaccines were released after the initial outbreak these are not currently commercially available (January 2018).  Unpublished data from the current outbreak would indicate that animals either previously vaccinated or infected in the initial outbreak are not necessarily protected from repeated infections.  Application of insecticide may help reduce the numbers of midges biting individual animals but hasn't been successful in controlling midge numbers at a large scale. Shifting mating until later in the season (for sheep flocks) is probably the most practical solution for minimising Schmallenberg risk, however midge numbers may remain high until October in years with a late onset of frosts.

A Europe-wide risk assessment has concluded that Schmallenberg virus is unlikely to cause illness in people. As yet, no human cases have been detected in any country, and the most closely related viruses only cause animal disease.

Pregnant women should not have contact with sheep and goats at lambing/kidding time due to risks of exposure to other disease causing organisms. 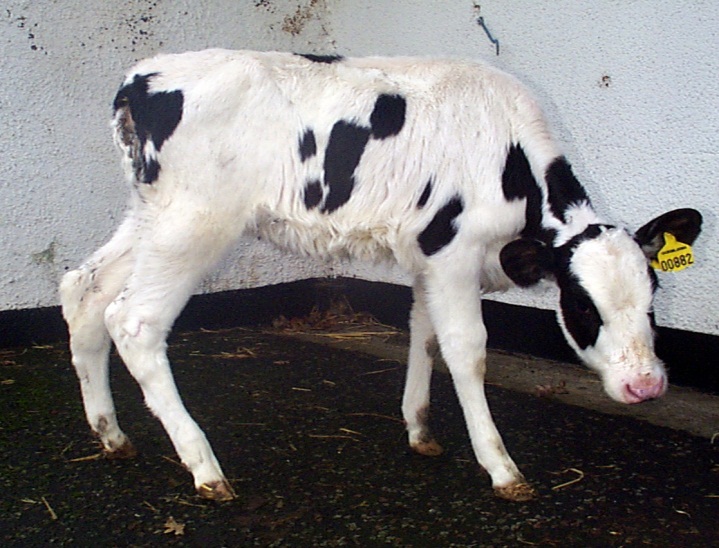 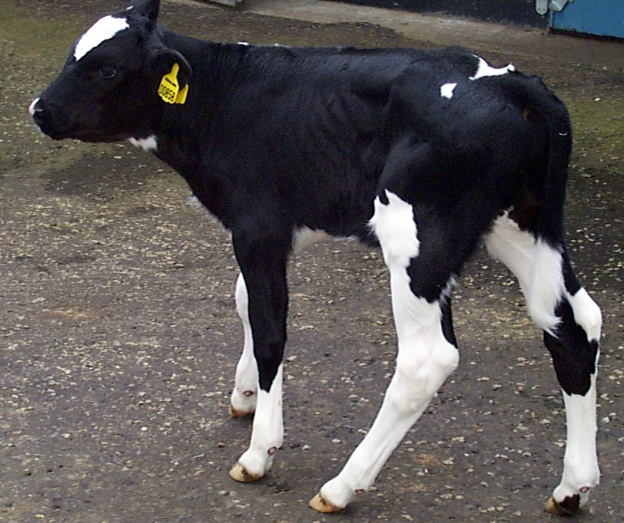 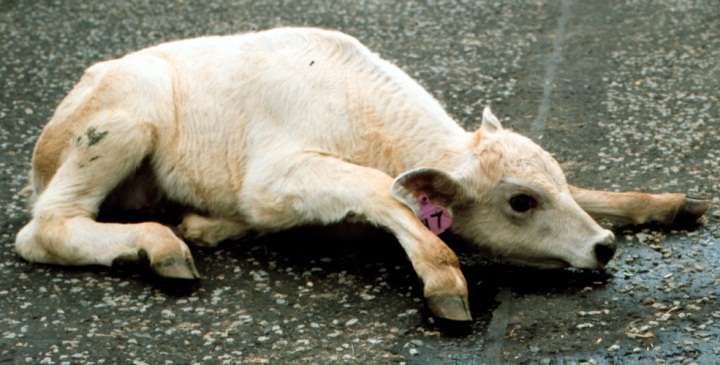 Calf affected by hydranencephaly.  This calf showed signs of low head carriage , ataxia and wide-based stance but was also blind from birth. (see below). 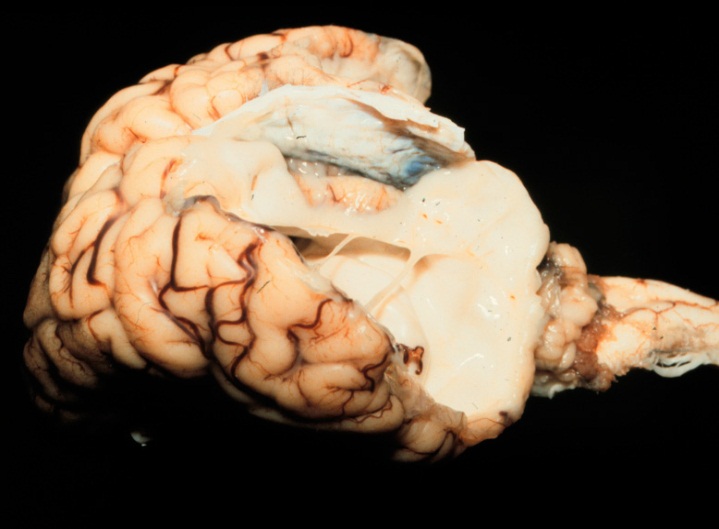 Hydranencephaly (see above) at necropsy.  There is little cerebral cortex and cerebellum - the common reported defects for Akabane infection, and most likely SBV. 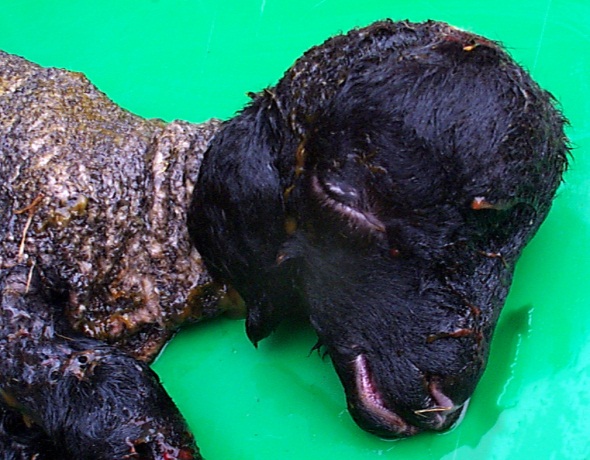 Newborn lamb affected by Dandy-Walker syndrome.  The clinical signs (if born alive) would be similar to SBV. 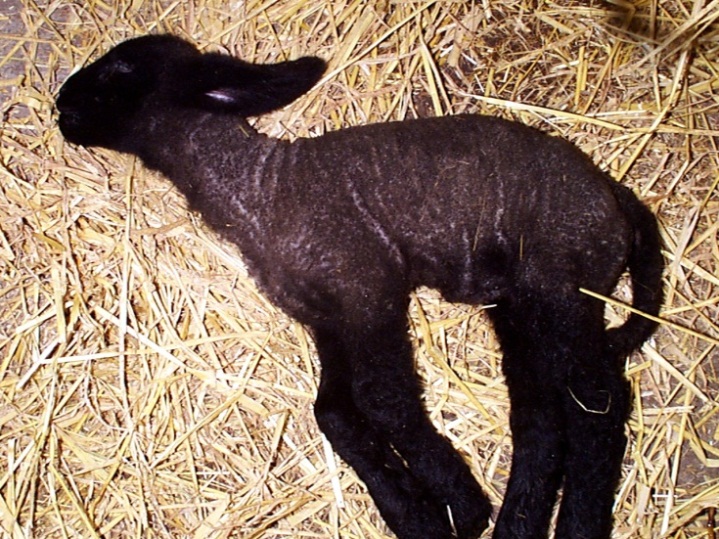 Schmallenberg Virus is not a notifiable disease but farmers and vets should remain vigilant and report any suspicious cases to AHVLA for testing as part of our enhanced surveillance. The European Centre for Disease Prevention and Control suggests that there is a low likelihood of any risk to public health.