Although the breeding period on many intensive sheep farming enterprises may only extend to five or six weeks, effective management of rams necessitates all year round attention.

The target conception rate is >90 per cent ewes pregnant within the first breeding cycle. The most common cause of poor conception rates is the ram rather than infectious disease(s). Routine vaccinations and anthelmintic treatments apply equally to rams as to the ewe flock. 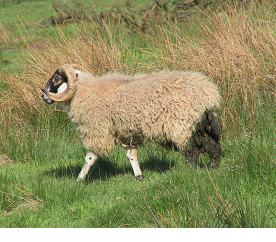 Anthelmintic treatment of rams as part of the whole flock parasite control programme is very important. 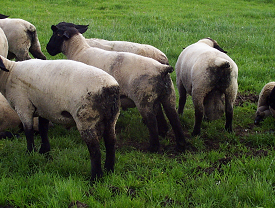 Poor parasite control in this group of rams.

The timing of anthelmintic treatments - should be detailed in the farmer's own individual flock health plan. While there are good general guidelines detailed in sustainable control of parasites in sheep (SCOPS), the PGE control programme must be tailored to the needs of individual farms and regularly reviewed. The introduction of new classes of anthelmintic (monepantel, 4-AD) and (derquantel 5-SI) affords the opportunity to further update the PGE control measures on your farm in consultation with your veterinary surgeon.

Footcare is essential to maintain ram soundness. Footrot is the most common cause of lameness in rams and can be readily treated with antibiotics ensuring a rapid return to soundness. Foot paring delays healing and is not recommended for the treatment and control of footrot. Prompt detection and antibiotic injection are proven to be much more effective than foot paring and topical antibiotic spray for footrot. Regular footbathing can have an important role in prevention of footrot provided that the facilities are well maintained and that sheep have a dry stand after exiting the footbath. Walking/standing sheep in mud/slurry immediately after footbathing will have no benefit whatsoever. 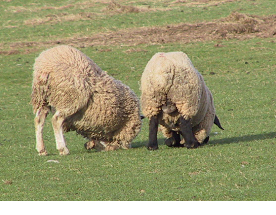 An all too common sight amongst a group of rams. 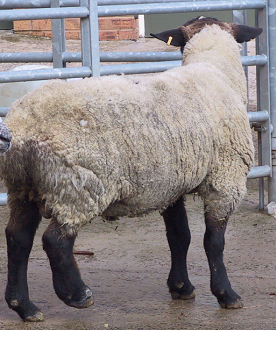 Immediate attention to lame sheep is essential to maintain breeding soundness. This ram will not work with this degree of lameness. 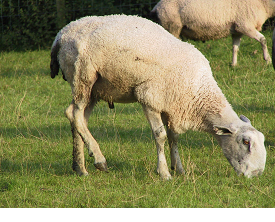 All lame sheep must be treated within one to three days. This ram was sound two days after antibiotic treatment for footrot. 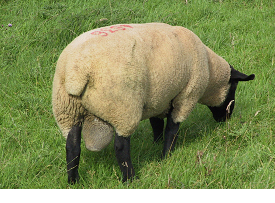 Many rams are over-conditioned at sale. Fashion rather than function. 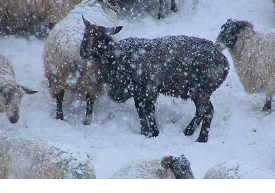 Debility following weight loss during the mating period, especially during bad weather, may render rams more prone to respiratory disease and other infections. 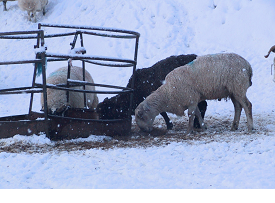 Daily feeding during the mating period is rarely undertaken but has many benefits. 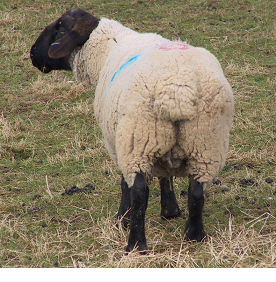 Suffolk ram shown immediately after the breeding season. Body condition scoring is important because a visual assessment can be inaccurate as the fleece may mask considerable weight loss. 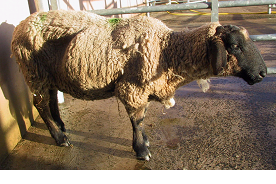 Debilitated ram after the breeding season. 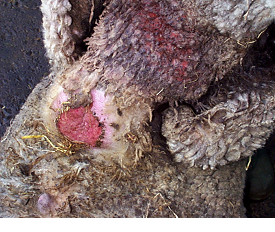 Ill-fitted ram keel harnesses and blocks often cause large brisket sores which heal very slowly. Keel paint has a number of advantages and should be used wherever possible in preference to raddles.

As a consequence of high concentrate feeding ahead of sale, rams are prone to several conditions including urethral obstructions (calculi), copper poisoning and acidosis (grain overload, barley poisoning). These conditions can be prevented by careful nutritional management with veterinary advice as necessary supplied in the flock health plan.

Correct ration formulation with appropriate mineralisation is the basis for prevention of urolithiasis in intensively-fed sheep. Rams should be fed proprietary concentrates to avoid mistakes in ration formulation. Urine acidifiers, such as ammonium chloride, are commonly added to rations. Sodium chloride may be added to rations to promote water intake. Provision of adequate roughage promotes saliva production and water intake. Fresh clean water must always be available and frequent checks must be made for frozen pipes in sub-zero temperatures during winter. Do not use ewe minerals in rations intended for rams.

As well as being susceptible to copper deficiency, sheep are also prone to copper accumulation and toxicity. There is considerable breed variation with respect to copper absorption and therefore to copper deficiency and toxicity with Texel and Suffolk two of the more susceptible breeds. Chronic copper toxicity results from ingestion of relatively high levels of copper over a prolonged period; the term "relatively high levels" is very important as dietary factors such as molybdenum and sulphur exert considerable influence on copper availability. The copper concentration of proprietary concentrates is strictly regulated in the UK to levels below 15 mg/kg as fed in complete feedingstuffs. Home mixing and mineral supplementation must be very carefully considered when formulating intensive rations for rams in order to avoid problems with chronic copper toxicity.

Acidosis results from the sudden, unaccustomed ingestion of large quantities of carbohydrate-rich feeds, typically grain or concentrates but may also occasionally result from a sudden change or interruption in feeding following sale. Mature rams must not be fed more than 1 kg of concentrates at any one feed.

Upon arrival on the farm, the risks posed by anthelmintic resistant nematode species, sheep scab, and liver fluke must be fully recognised. All purchased sheep, especially rams, must be treated sequentially with an appropriate macrocyclic lactone preparation (3-ML) and one of the new anthelminitic monepantel (4-AD) or derquantel (5-SI) upon arrival and left in the handling pens overnight to prevent pasture contamination with potentially resistant nematode eggs. The sheep should then be turned on to contaminated pasture to dilute the possibility that all nematodes have not been eliminated and that resistant strains are still present. 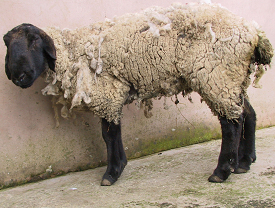 Suffolk ram three months after purchase and turnout with 80 ewes. This debilitated state was caused by PGE. The ram had not received any anthelmintic treatment since purchase.

Careful inspection for ectoparasites is essential as macrocyclic lactone preparations do not kill lice and under certain situations plunge dipping may be an appropriate treatment option. Over-reliance on macrocyclic lactone preparations to control sheep scab greatly increases the risk of selecting for multiple-resistant strains of gut worms.  There are also concerns over possible development and selection for resistance in sheep scab mites. 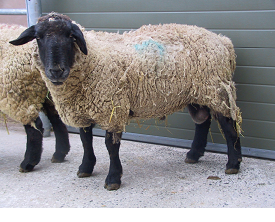 Louse infestation in a purchased Suffolk ram. The flock had a problem with lice which was not treated - this ram was a victim not the culprit

Treatment for liver fluke infestation should be carefully considered. Rams purchased in the autumn should be treated with triclabendazole to remove a potential immature fluke risk. Veterinary advice is essential if there are concerns over triclabendazole resistance. 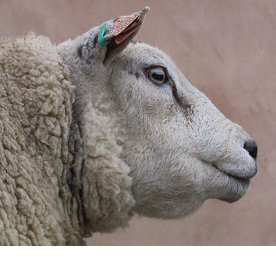 Bottle jaw in a Texel ram with fluke - the ewes had been treated on this farm but not the rams.

While almost all flocks in the UK have footrot, it would be prudent to examine the feet of all purchased sheep and treat those with footrot with a high dose (20 mg/kg) oxytetracycline injected intramuscularly. Routine footbathing in zinc sulphate or formalin solution can be used as a precautionary measure but is much less effective for the treatment of footrot. Veterinary advice should be sought if there is any evidence of contagious ovine digital dermatitis (CODD). Contact with other sheep on the farm must be avoided for at least one month. 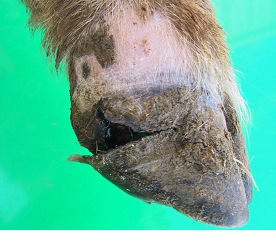 Introduction of contagious ovine digital dermatitis (CODD) into your flock must be prevented at all costs.

Pedigree ram breeders have made concerted efforts to eradicate CLA but any swelling or discharging abscess on the head must be considered CLA until proven otherwise, and veterinary advice sought.

There has been a worrying increase in the number of rams that have shown clinical signs of the lung tumour condition OPA after purchase. OPA is invariably fatal often within 12-18 months of purchase but sheep may show signs of disease several years after purchase. The purchased ram appears to be healthy at sale but the virus causing the lung tumour can spread between sheep during housing and close confinement and cause serious losses in the purchaser's flock. There is no serological screening test presently available for Jaagsiekte so careful sourcing of rams is essential. Inform the vendor of the diagnosis of SPA and only buy from a farm known to be free of disease by reputation. Ultrasound examination of the lungs of purchased sheep will detect OPA lesions but does not guarantee freedom from infection. 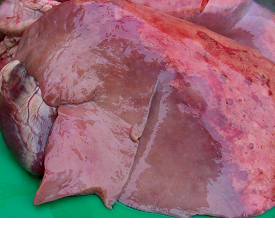 Johne's disease has become a significant problem in many flocks, including pedigree breeders, but the true prevalence has yet to be accurately determined. Disease, manifest as chronic weight loss without diarrhoea, may not become obvious for 12-24 months. 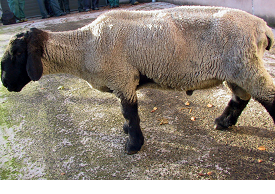 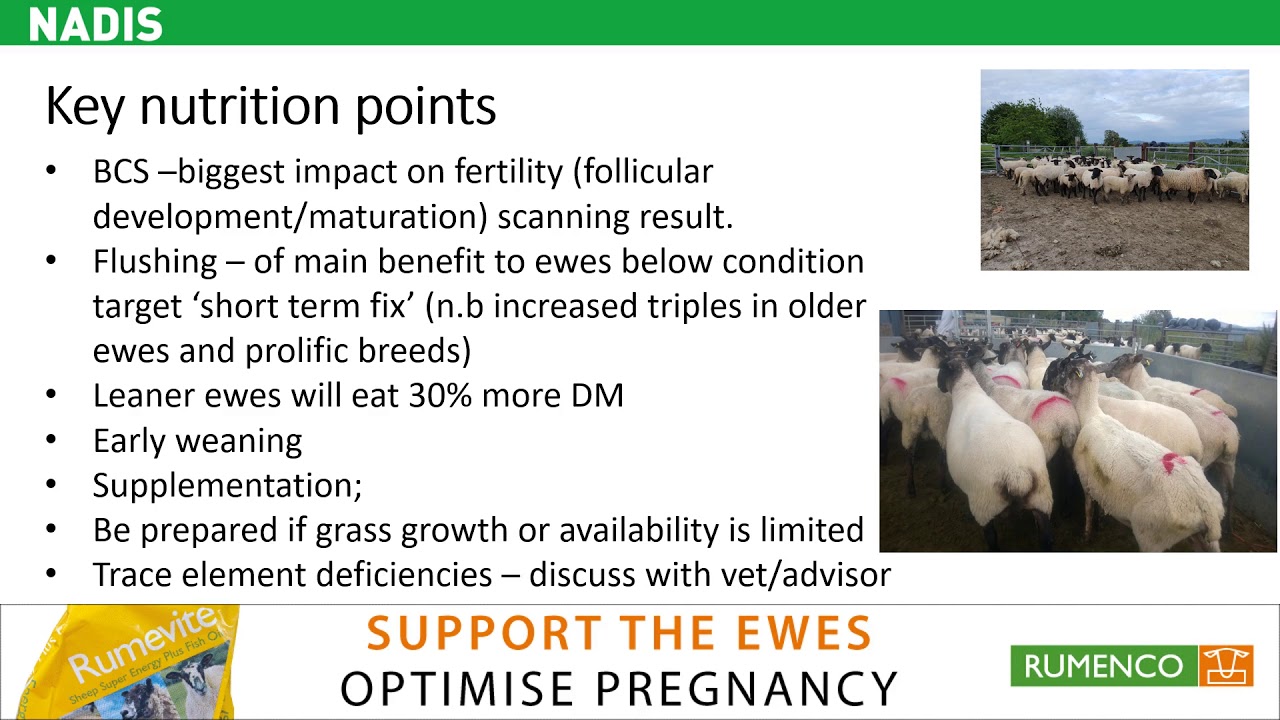