Figure 1: Egg count data shows the most recent counts for roundworms in sheep at each location between the sample dates stated.

Rainfall was 122% of average in July, and was a notably wet month in eastern and south-western Scotland and in north-west England. For the preceding 3 months (May – July), rainfall varied considerably between regions, being above average in Scotland, northwest England and Wales and Northern Ireland, and below average in central and east of England.

The summer fluke forecast published last month is based on temperature and rainfall data from August – October 2019 and May – June 2020. This is predicting high risk in northwest Scotland, moderate risk across the rest of Scotland, Wales, Northern Ireland, northwest and southwest of England (Figure 2). The provisional UK autumn fluke forecast will be published in next month’s parasite forecast. Whilst average temperatures recorded in July are below average, it should be noted that average temperatures still remained favourable for fluke and snail development on pastures. 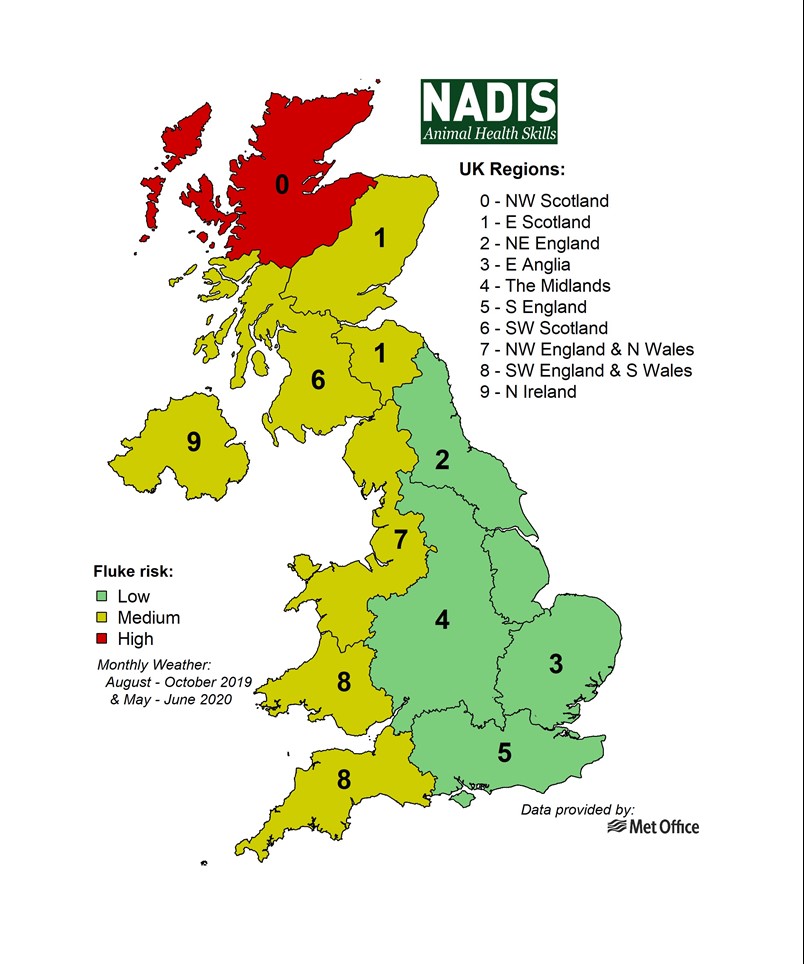 Farmers in these areas should be vigilant for signs of disease, particularly if you have a known history of fluke Infection, and/or if you have animals grazing “flukey” pastures. Both sheep and cattle are susceptible to infection with liver fluke, although acute outbreaks are more common in sheep, with signs including:

When buying in new stock, it is important to remember these animals could be a source of new parasites and/or drug resistance. As a consequence, quarantine measures should be undertaken.

As with all anthelmintic dosing, it is important to check you are dosing correctly by weighing animals, calibrating your dosing and weighing equipment, and administering treatments following the manufacturer’s recommendations.

For sheep, current ‘gold standard’ practice is as advised by Sustainable Control of Parasites in Sheep (SCOPS) concerning roundworms and sheep scab involves:

Where introduction of triclabendazole-resistant liver fluke in sheep is of concern:

For cattle, Control of Worms Sustainably (COWS) guidelines highlight the importance of knowing disease status of purchased animals or their farm of origin, but are generally based on the principles of house, treat and test. The major areas of concern with bought-in cattle are:

Additional liver fluke specific guidelines have been developed for bought in cattle. For more information on these, please visit the COWS group website and speak with your vet or SQP.

Risk of PGE in lambs usually peaks in the summer months, the relatively warm and wet conditions experienced in the preceding months will have favoured larval development and dispersal on pastures, whilst the relatively cool temperatures experienced in July may have helped to prolonged their survival later into the season than usual. Egg count data from the Parasite Watch in May – July shows variation across the UK, but moderate to high counts present in all areas (Figure 1).

Consequently, it is important to stay alert for signs of PGE, particularly in groups of lambs grazing “dirty” pastures, namely those grazed by ewes earlier in the season, or lambs over the previous season.

Unlike other PGE-causing roundworms, the barber’s pole worm (Haemonchus contortus) affects both lambs and ewes. Whilst less common, the blood feeding behaviour of H. contortus means heavy pasture burdens can result in sudden and severe disease with little to no prior warning (Figure 3). 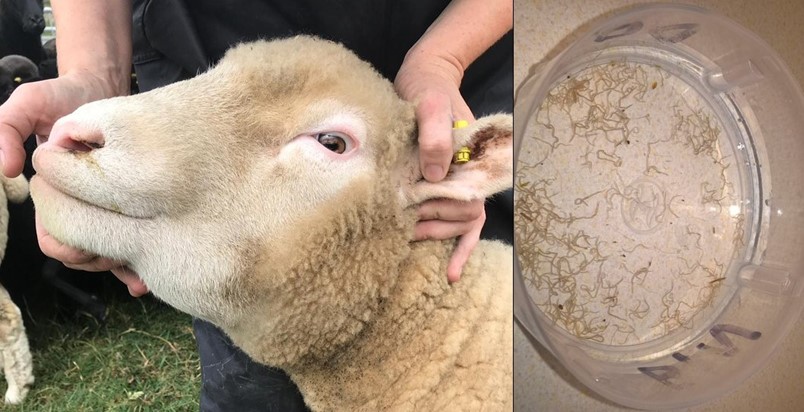 Haemonchosis can be treated with most anthelmintic products, although some evidence of resistance to white drenches (1-BZ) has been reported previously in the UK. Some flukicidal products, such as nitroxynil and closantel are also effective and should be considered in certain cases.

Soiled back ends resulting from PGE and foot rot lesions are both common sites for blowfly strike (Figure 4). Failure to treat promptly is a welfare issue and can lead to disrupted grazing, loss of condition, secondary infections and death.

Figure 4: Wounds and footrot lesions are a common site for blowfly strike.

Figure 5: PGE in cattle causes diarrhoea and up to a 30% reduction in the growth rates of youngstock. Commonly affected animals include growing dairy heifers in their first grazing season (left) and weaned autumn-born suckler calves in their second grazing season (right).

Risk of lungworm infection (or “husk”) peaks for animals at pasture in the late summer and autumn. Outbreaks are difficult to predict, but may be associated with wetter summers and following periods of rainfall as infective larvae are dispersed from faeces onto pastures in large numbers (Figure 6). 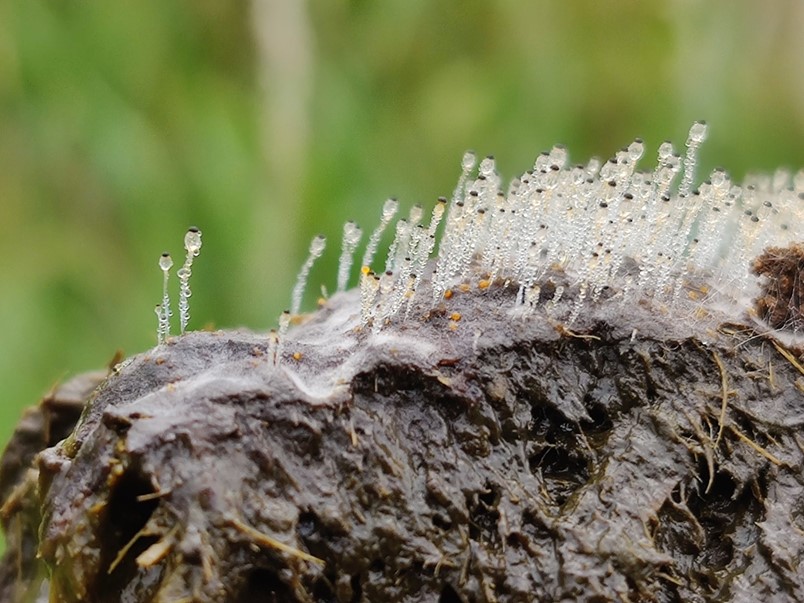 Calves that have been vaccinated ahead of turnout should be protected against clinical disease, although it is important to note anthelmintic use in these animals over the grazing season should have allowed for some natural infection to develop a fully protective immunity for subsequent grazing seasons.

Figure 7. Early signs of lungworm infection include widespread coughing and elevated respiratory rates and difficulty breathing. Depending on their history, both youngstock and (in some cases) adult cattle can be at risk of infection.