This paper looks in detail at one of the most important limits on pig breeding herd production - that of pigs born dead.

Pigs that are born dead may have died at any time during the farrowing process or before.  If they have died in earlier pregnancy (up to 110 days gestation) there will be evidence of complete or partial mummification, whereby the fluid component of the foetus is reabsorbed leaving just skin and bone.  If the piglet dies in the few days prior to birth, it is likely to be swollen, slimy and may show early signs of decomposition.

However, studies have shown that in the "normal" herd, more than 80% of stillborn piglets are alive at the start of farrowing and this incidence only changes in the face of infectious disease e.g. PRRS, Parvovirus. 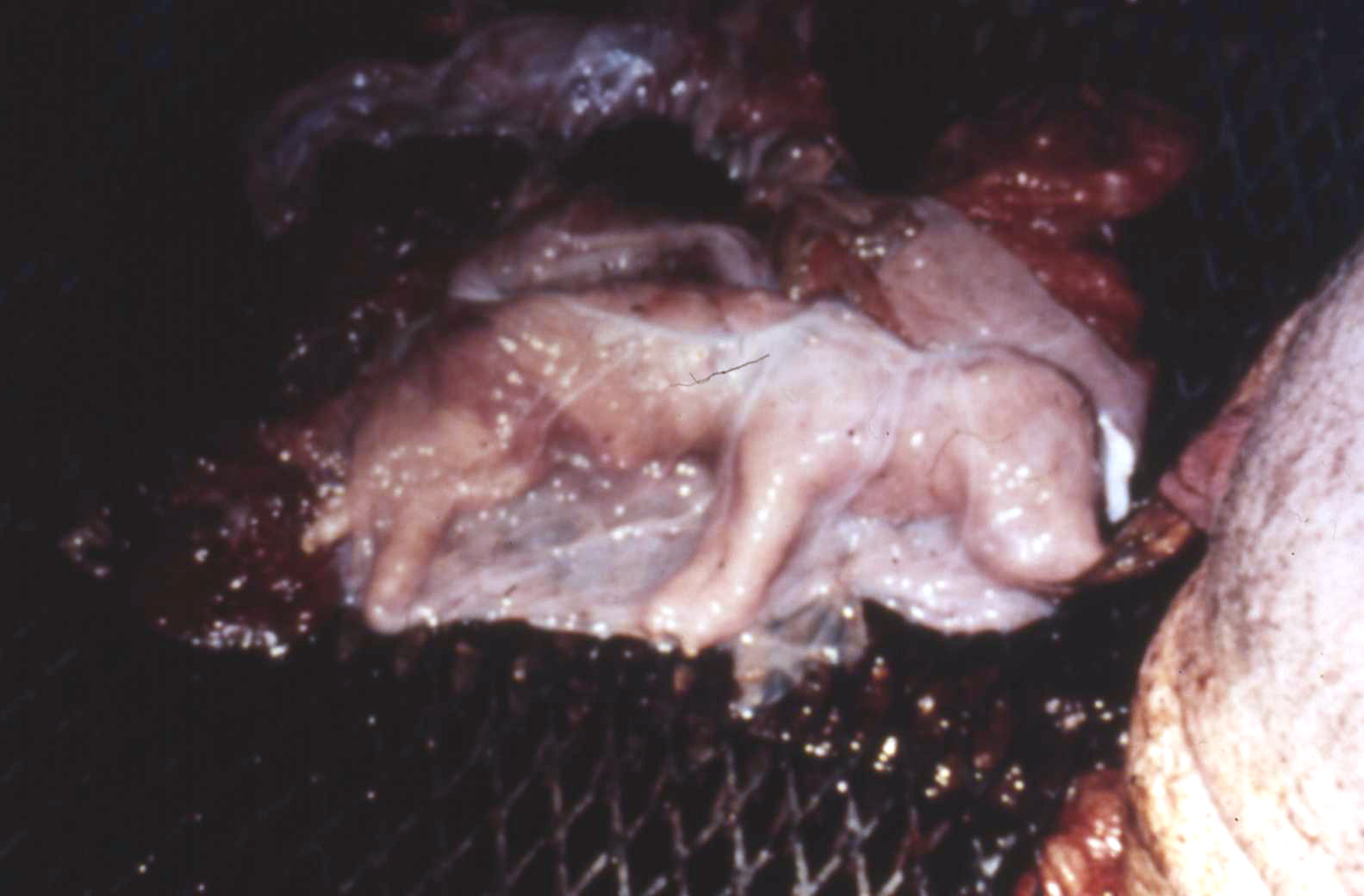 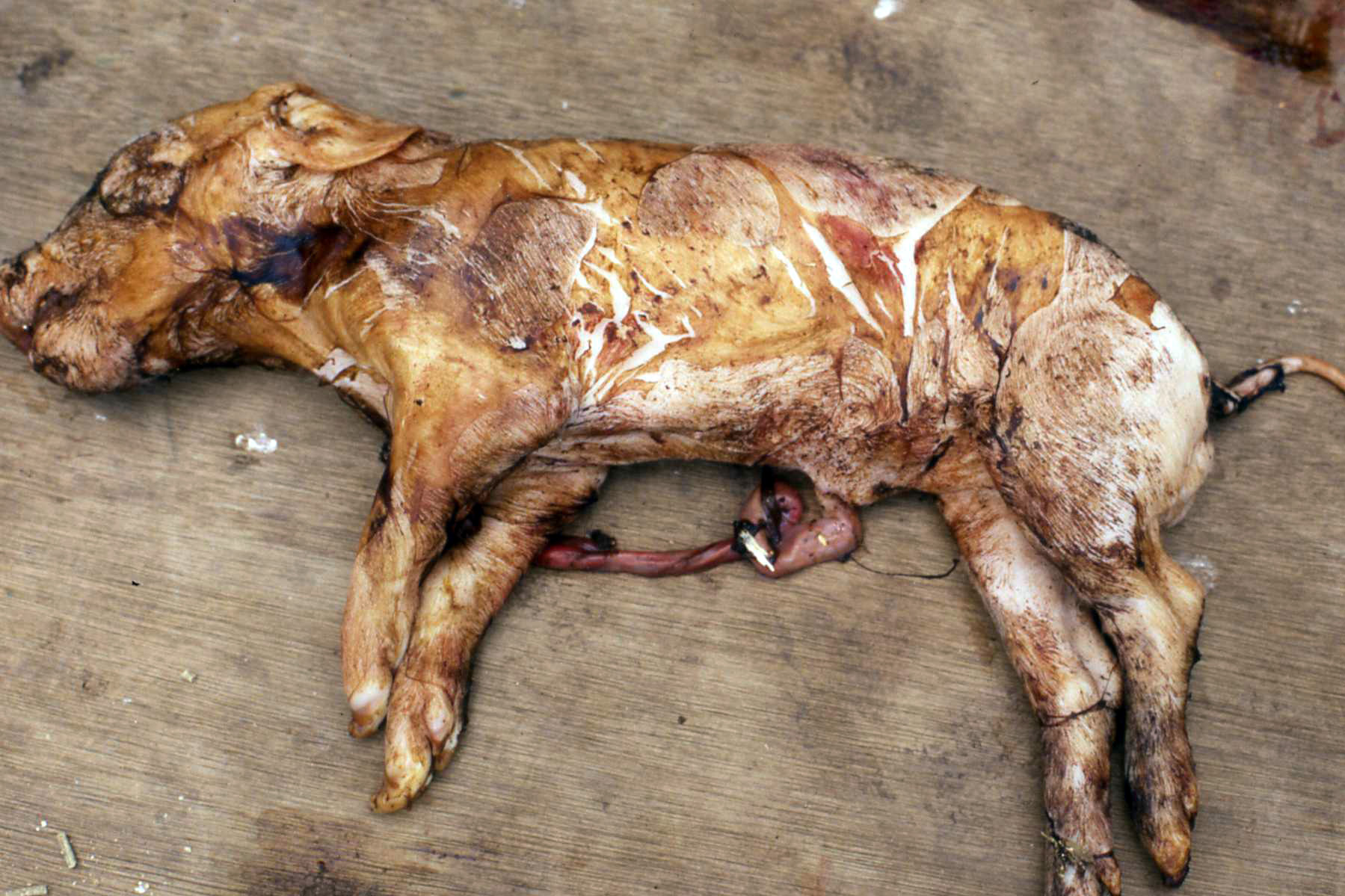 In a normal indoor herd unaffected by specific disease, a target for stillborn pigs would be 5-7% of the total number born.  However, this target would assume a normal distribution of sow ages within the herd.  There is a variable incidence of stillbirths with parity along the following lines:- 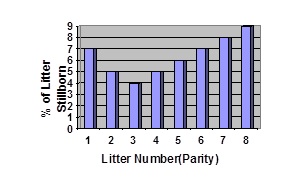 The reasons for this distribution are:-

1) Gilts tend to produce smaller litters of bigger pigs, which may become obstructed and, therefore, die before birth. With a lower litter size the percentage stillbirth will be inflated.

Therefore, when reviewing stillbirth levels they must be looked at in the light of the herd age structure.  Retention of too many old sows in the herd will contribute to raised stillbirth levels for the herd as well as producing more uneven piglet size at birth.

The economic effect of a raised stillborn level can be quite high; for a 300 sow breeding herd running at 10% stillbirths this would represent a loss of 235 pigs per year above the 5-7% intervention level.  If each of these piglets was valued fully within a breeder feeder enterprise, this represents a financial loss of over £10000 per year.

It should also be borne in mind that some pigs recorded as born dead are actually alive at birth but are weakened (possibly by a shortage of oxygen during farrowing) and never move away from the rear of the sow.  Whilst the definition of death may be arguable, the causes and effects are the same.  (Stillborn pigs can be definitively identified best by the failure of lung sections to float in water).

Records of stillbirths in outdoor herds are generally low, but this may be due as much to a failure to find them as it is to genuinely reduced incidence.

During gestation, the piglet is supplied with oxygen by direct transfer from the sows' blood to the piglets' across the placenta and this continues up until the point of delivery.

The stimulus for the piglet to breathe is the loss of this oxygen supply.  If the piglet is still inside the sow, it will either suffocate or drown depending on how far down the birth canal it has got.  Therefore, premature separation of the placenta or early breaking of the umbilical cord will kill the piglet.  The former is the most common problem and will result from either obstruction of the passage of the piglet or a failure of the uterus to contract and expel the pig.  Rarely the umbilical cord becomes entwined with the pig, cutting off the blood supply.  (Strangulation is very rare.)

As well as being strongly age related, a number of factors can slow down farrowing by reducing the contraction of the uterus - under the control of Oxytocin.  In general, it can be said that in the second half of the farrowing process, if there is more than a 30 minute interval between delivery of pigs, stillbirths are likely to result.  Farrowing can be slowed by:-

7) Lack of exercise in sows.  There is a widely held belief that sows kept in confinement during gestation (stalls or tethers) produce higher stillbirth rates.   National records indicate that in 1992, when 50% of sows would have been confined, the stillbirth average was 6.7% of total births (MLC yearbook 1993) whereas in 2002 when  sows were kept unconfined in gestation, the stillbirths average was the same. (MLC yearbook 2003.) However, more recent data from 2013 suggests level of stillbirth have declined to an average of 5% which might suggest sows kept their whole lives unconfined do perform better. This must be tempered by the fact that 40% of sows are outdoors now and they record lower stillbirth rates (3.8% outdoors v 5.5% indoors.

8) Sow illness and constipation at farrowing.

Where stillbirths are excessive, a full veterinary investigation is needed to highlight the contributory factors.

In addition to correcting any environmental problems (temperature and space provision), sow condition and nutrition problems, the key to reducing stillbirth rates is supervision of farrowing.  If financial constraints prevent supervision then a higher level of pigs born dead - as well as a higher neonatal mortality - can be expected.

Supervision may be improved by induction of farrowing using prostaglandins (with or without Oxytocin-like products) but once farrowing has started, the intervals between piglets' deliveries should be recorded.  As a general guide, a 'normal' farrowing would typically involve delivery of a few piglets followed by a 'rest' period of up to 90 minutes before starting again.  However, any delay beyond 20-30 minutes since the last pig, in the second half of farrowing is likely to lead to later born pigs arriving dead.  Traditionally, small doses (0.2-0.3ml) of Oxytocin can be given repeatedly to deliver each piglet where farrowing is slow.

A longer acting analogue (Reprocine : Vetoquinol) is now available and can be given as a single dose once farrowing has started, and will give waves of uterine contractions - accelerating farrowing - over a 6-hour period. The actual dose used is critical and should only be used as directed by the herd's veterinary surgeon.  Before using either traditional Oxytocin or the long acting alternative, always ensure that there is no obstruction in the birth canal.

Once delivered, early and appropriate action may be needed to clear the airways of fluid and allow unassisted respiration. 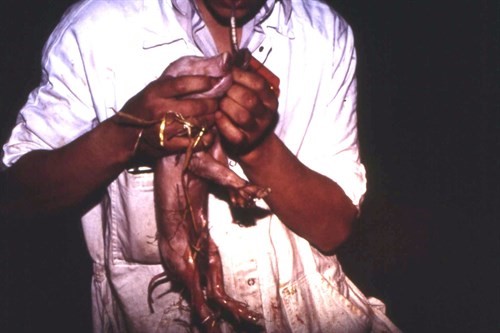 Fig 3: Cleaning fluid from the airways of a newborn pig - using a 'pooter' - is part of the supervision process that will reduce stillborn pigs

As a final comment, the old fashioned use of well soaked bran in the 48 hours prior to farrowing can significantly assist speeding up of farrowing, reducing stillbirths as well as helping milk production and is particularly relevant for herds in which sows are removed from straw based dry sow accommodation into fully slatted or unbedded farrowing pens.