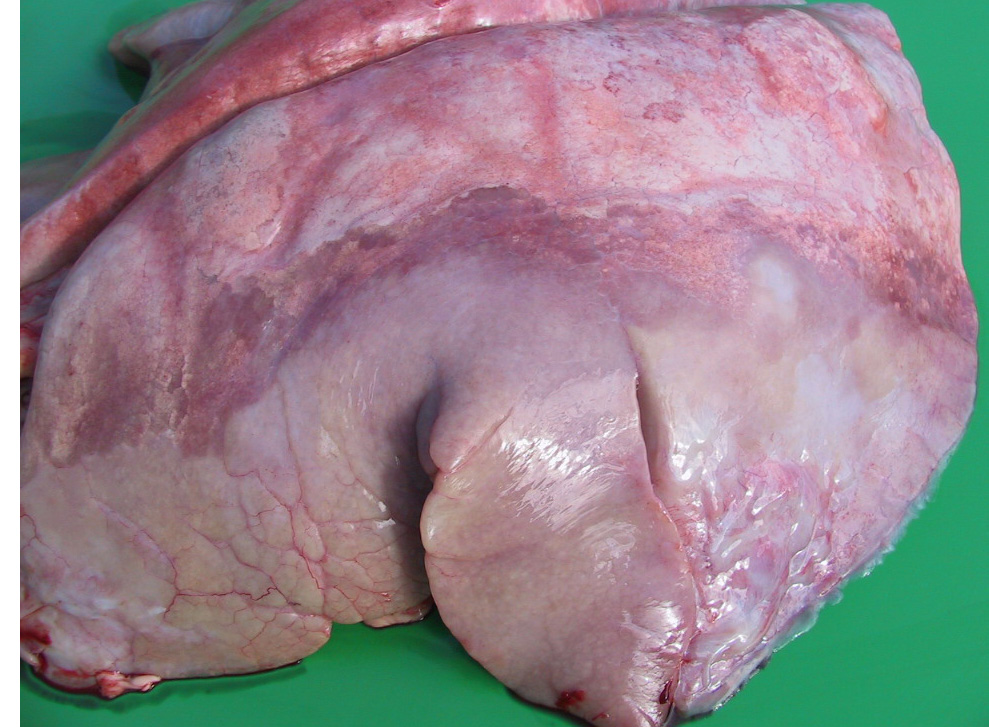 Tumour growth has replaced the normal lung structure affecting the ventral portions of all lung lobes. 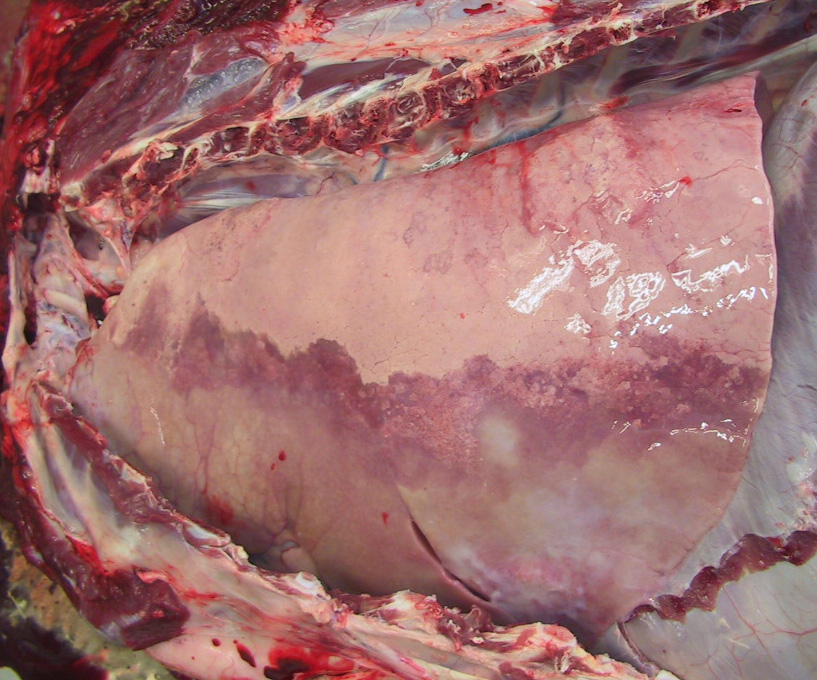 OPA is common in the UK but the disease is grossly under-reported because few sheep deaths are investigated.  It is generally considered a chronic wasting disease with progressive respiratory distress and is invariably fatal.  In the field, the incubation period from infection with JSRV to the appearance of clinical signs is many months or years with clinical disease most commonly observed in three to four year-old sheep, though it is occasionally seen at less than one year old.  The time from appearance of obvious respiratory signs to time of death ranges from days to several months.

The sheep's appetite remains good throughout the disease process.  As the disease progresses, affected sheep become increasingly tachypnoeic at rest with an increased abdominal component to their breathing effort.  OPA lesions may predispose to secondary bacterial pneumonia causing sudden death despite antibiotic treatment.  Thoracic auscultation does not aid diagnosis. Post mortem examination of the lungs backed by histology remains the gold standard diagnostic test for OPA.

Fluid gathers within the respiratory tract and first appears as a scant serous nasal discharge, and during the advanced stages of clinical disease may flow freely from both nostrils when the head is lowered during feeding.  This quantity may exceed 50 ml if the hindquarters are raised when the head is simultaneously lowered (colloquially referred to as the "wheelbarrow test"). Sheep showing a positive "wheelbarrow test" test should be euthanased immediately for welfare reasons as they are often severely dyspnoeic afterwards and death is not uncommon in the next 24 hours.  In addition, because the fluid contains a high concentration of infectious virus it is imperative to remove affected animals from the flock to reduce the risk of transmission.  Although a positive "wheelbarrow test" is pathognomonic for OPA, about one third of OPA cases produce no detectable fluid even in the advanced stages of disease.  Sheep with early OPA or with advanced OPA but no apparent fluid production will also be excreting JSRV into the air and are potentially infectious.  Therefore improved pre-clinical detection will be vital for effective OPA control and potential disease elimination, especially because there is no imminent prospect of a vaccine for JSRV. 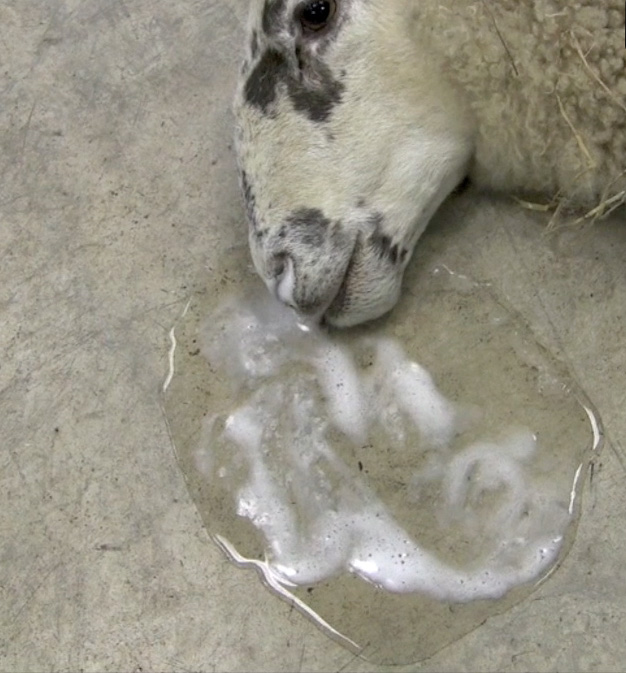 About one third of OPA cases produce no detectable fluid even in the advanced stages of disease.

JSRV-infected sheep do not make a detectable antibody response to the virus thus ruling out serological tests for diagnosis of infection.  A PCR-based test to detect infected cells in the blood proved insufficiently sensitive to be useful in field applications.  Clinical imaging techniques such as computed tomography have been proposed for OPA diagnosis but is far too expensive for commercial sheep, the method requires general anaesthesia, the equipment is available only in a small number of universities with veterinary departments, and biocontainment measures within the facility would prove difficult to operate.

Ultrasonography has previously been shown to readily differentiate chronic lung lesions in adult sheep including detection of OPA lesions as small as 2 cm in diameter involving the visceral pleura. An early evaluation phase prospective study has demonstrated the accuracy of trans-thoracic ultrasound examination using a 5-6.5 MHz sector ultrasound machine widely available in veterinary practice in the United Kingdom to diagnose OPA.  Restraint, preparation and examination time was restricted to 5 minutes per sheep to represent the cost limitations of commercial sheep farming.  One hundred sheep were examined and all 41 cases identified with suspect OPA lesions during trans-thoracic ultrasound examination had the diagnosis confirmed at necropsy, whilst sheep without ultrasonographic changes characteristic of OPA had no gross lesions of OPA at necropsy.  This study demonstrated the specificity of trans-thoracic ultrasound for diagnosis of OPA. Trans-thoracic ultrasound examination should be considered for a second opinion on an initial diagnosis of OPA, for screening purchased adult flock replacements for OPA, or for screening sheep in a known OPA-affected flock but a negative scan cannot provide a guarantee that the animal is free of JSRV infection nor early OPA. 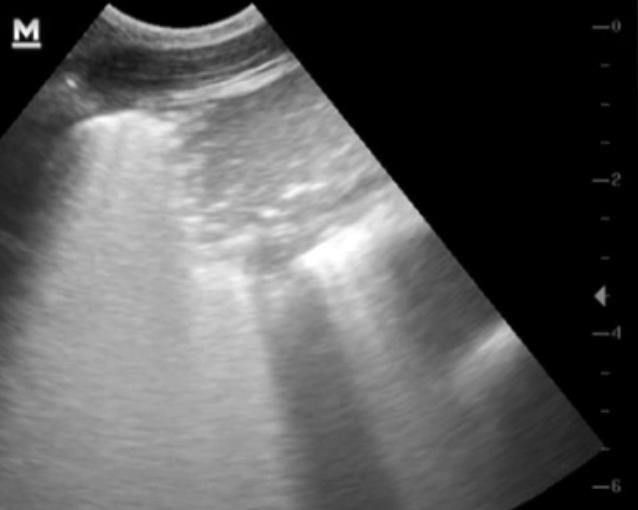 Classical appearance of small 2-3 cm hypoechoic OPA lesion in the ventral portion of the lung lobe displacing the lung medially (see below). 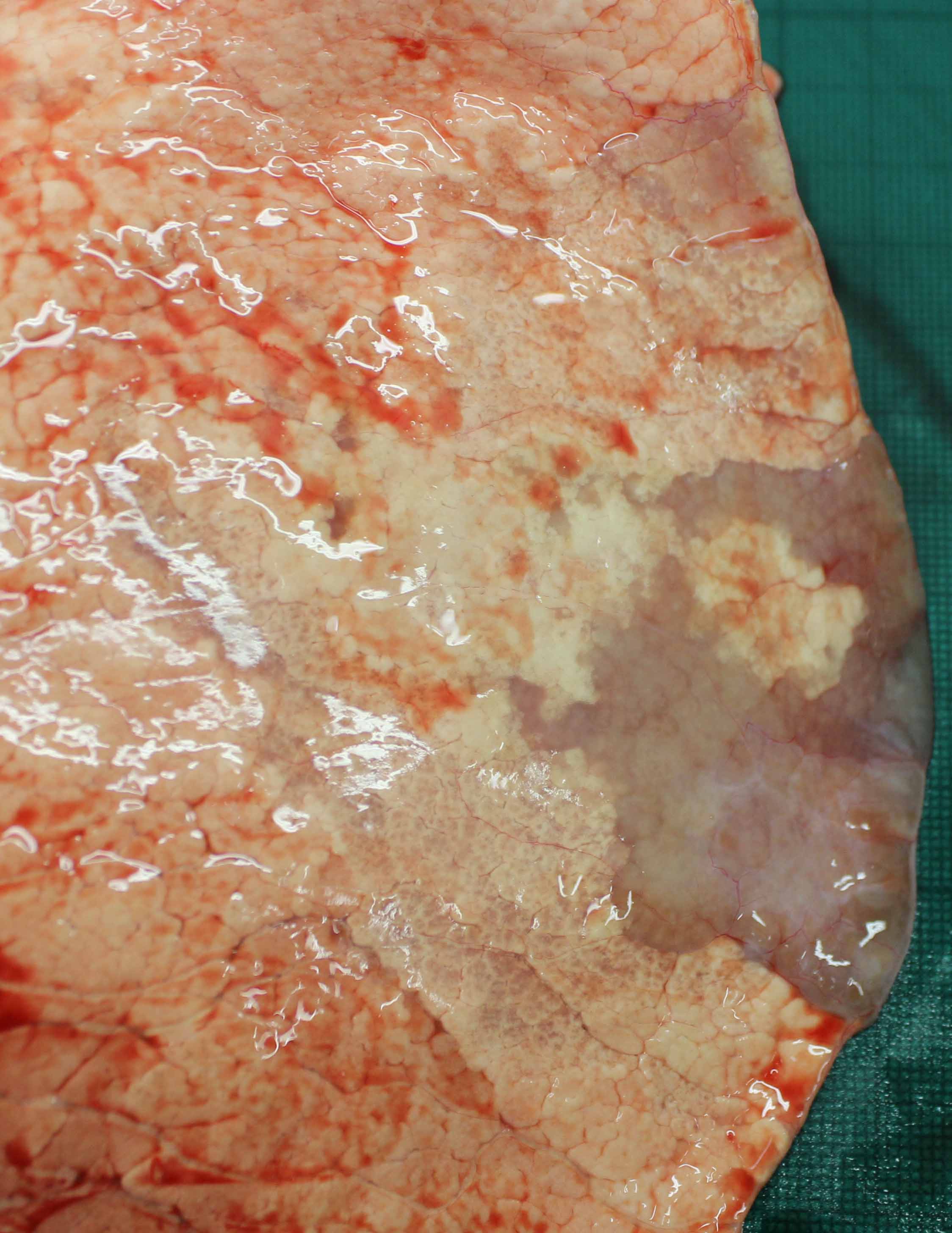 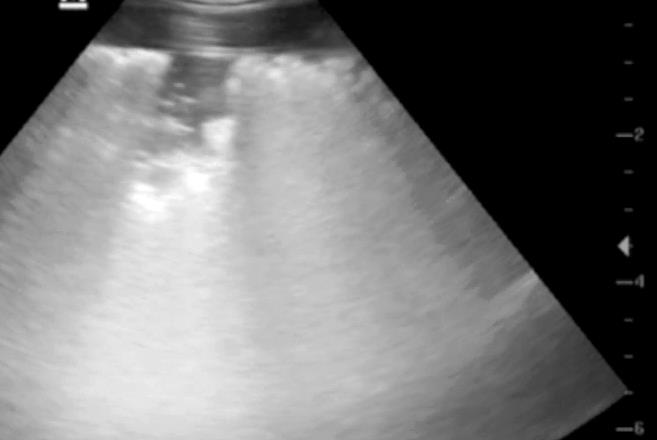 Suspect early 1-2 cm OPA lesion was shown at necropsy to be a lungworm lesion (see below). 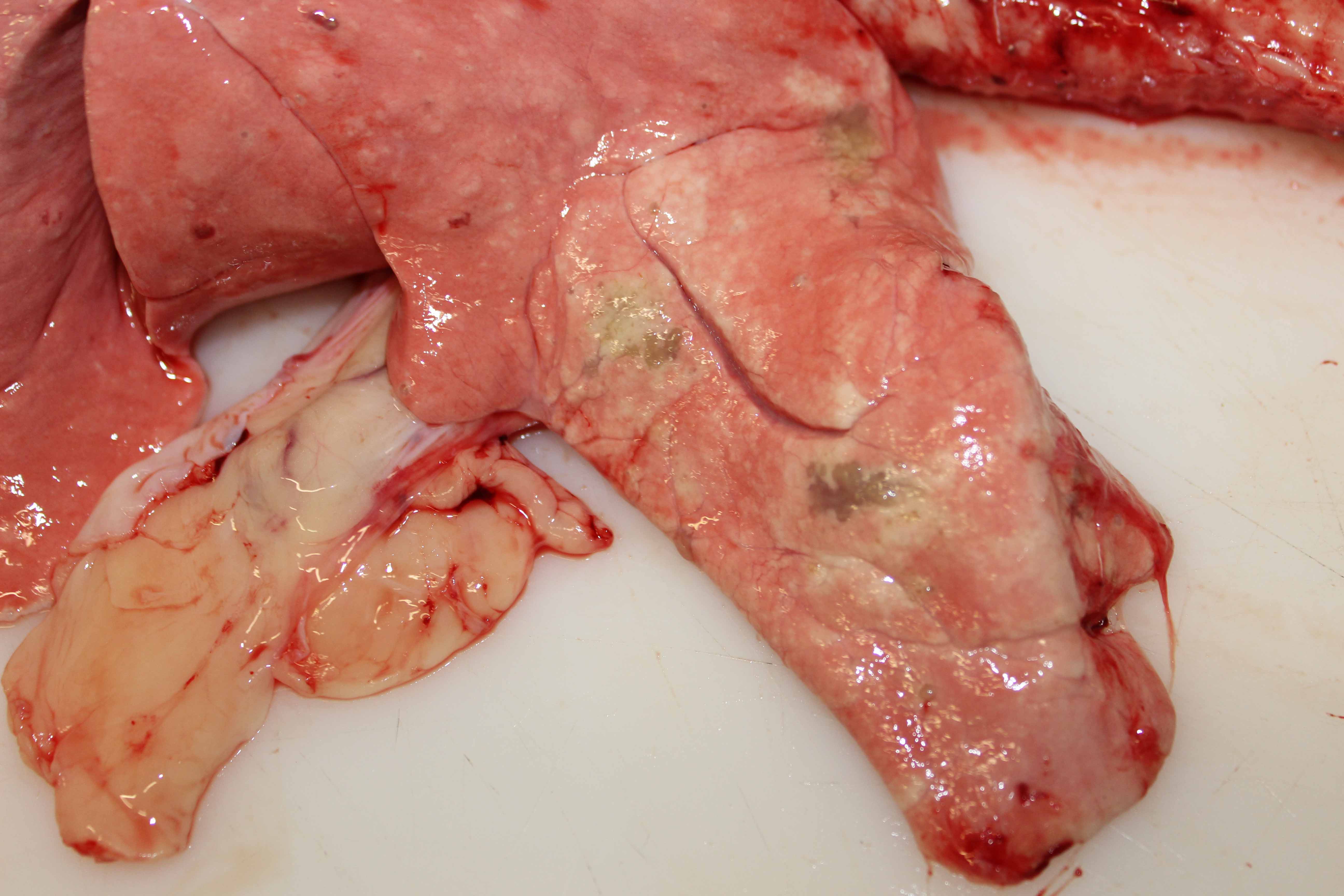 Lungworm lesions have been mis-diagnosed as very early OPA cases.

3768 adult sheep in four flocks (500, 648, 700 and 1920 breeding ewes, respectively) were screened for ovine pulmonary adenocarcinoma (OPA) during autumn/winter 2015/16 using a 6.5 MHz microconvex probe connected to a real-time, B-mode ultrasound machine.  Trans-thoracic ultrasonographic examination of both sides of the chest was undertaken at a rate of 60-80 sheep per hour. This ultrasound examination rate was recognised as a compromise between accuracy and cost with a target cost of approximately £1 per sheep considered acceptable to commercial farmers.  All sheep with suspected OPA were culled from the flocks and necropsied. OPA was confirmed in 6/8, 26/29 and 23/36 suspected cases; one flock had no OPA cases. Seven of 16 false positive sheep had extensive lung abscessation with no primary OPA lesion. Seven of 16 false positive sheep had 1-3 cm lungworm (Muellerius capillaris) lesions involving the visceral pleura. Three sheep in one flock have been diagnosed with OPA in the 3-8 months following initial ultrasound scanning. 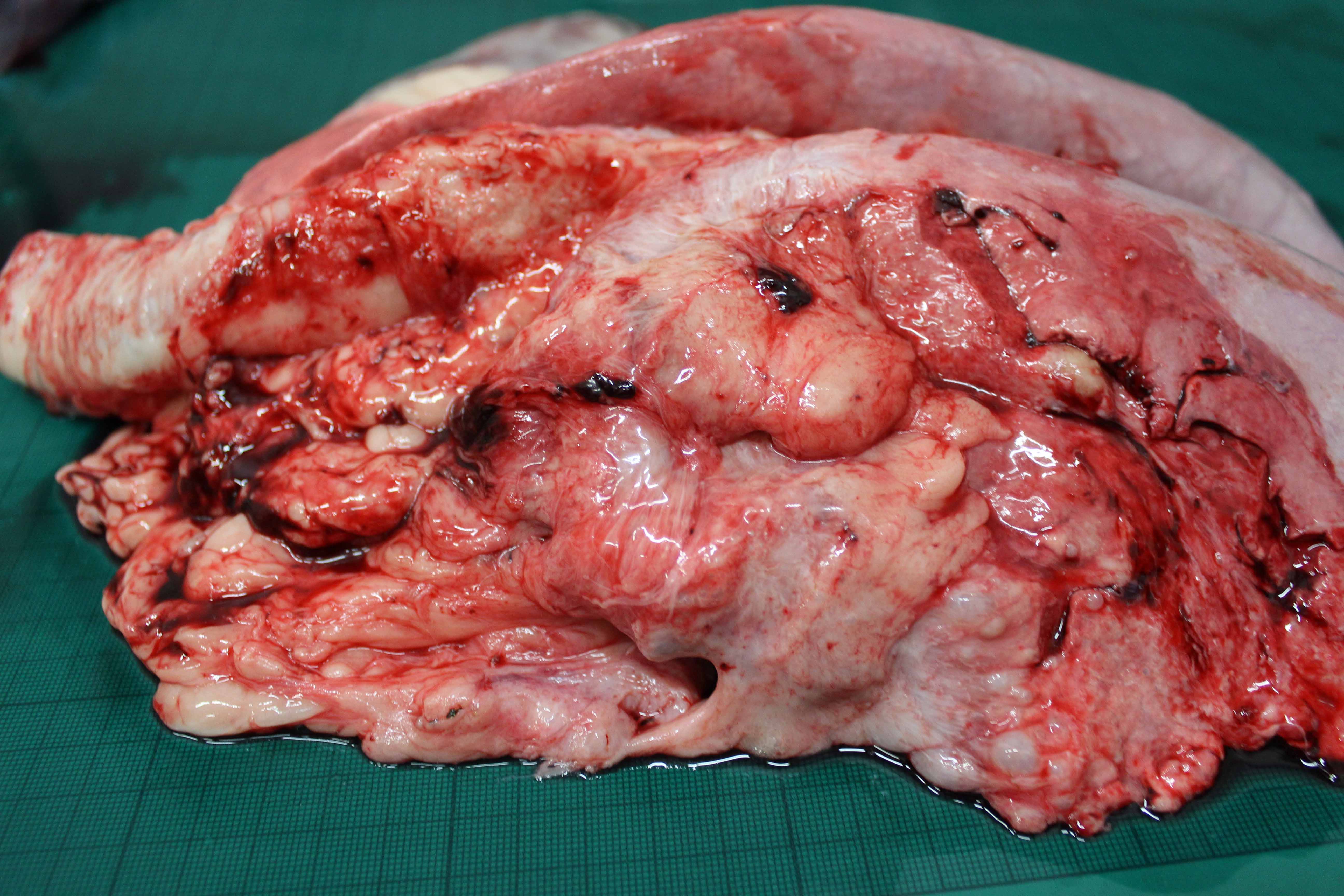 Extensive lung consolidation associated with marked secondary abscessation has been a common error in OPA diagnoses. 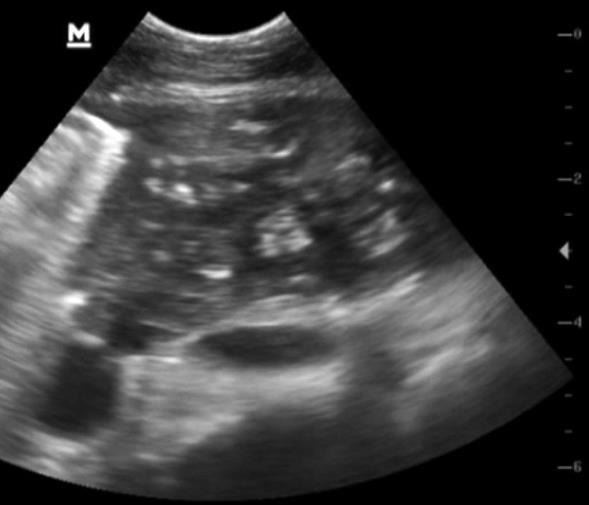 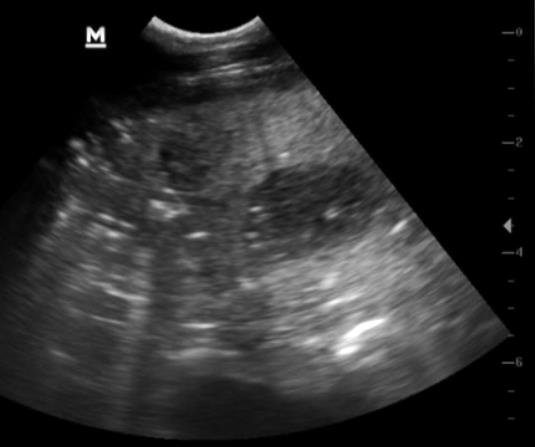 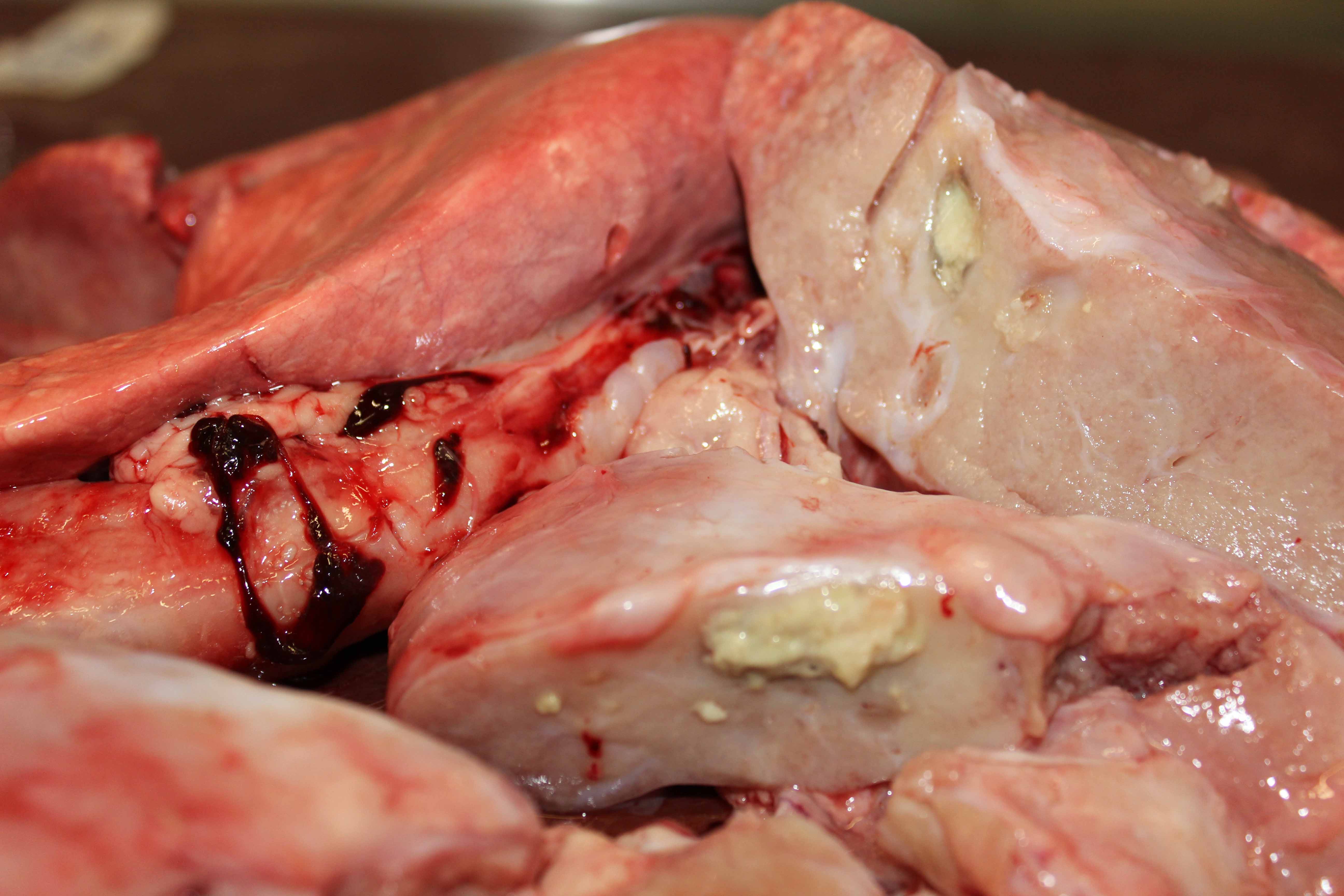 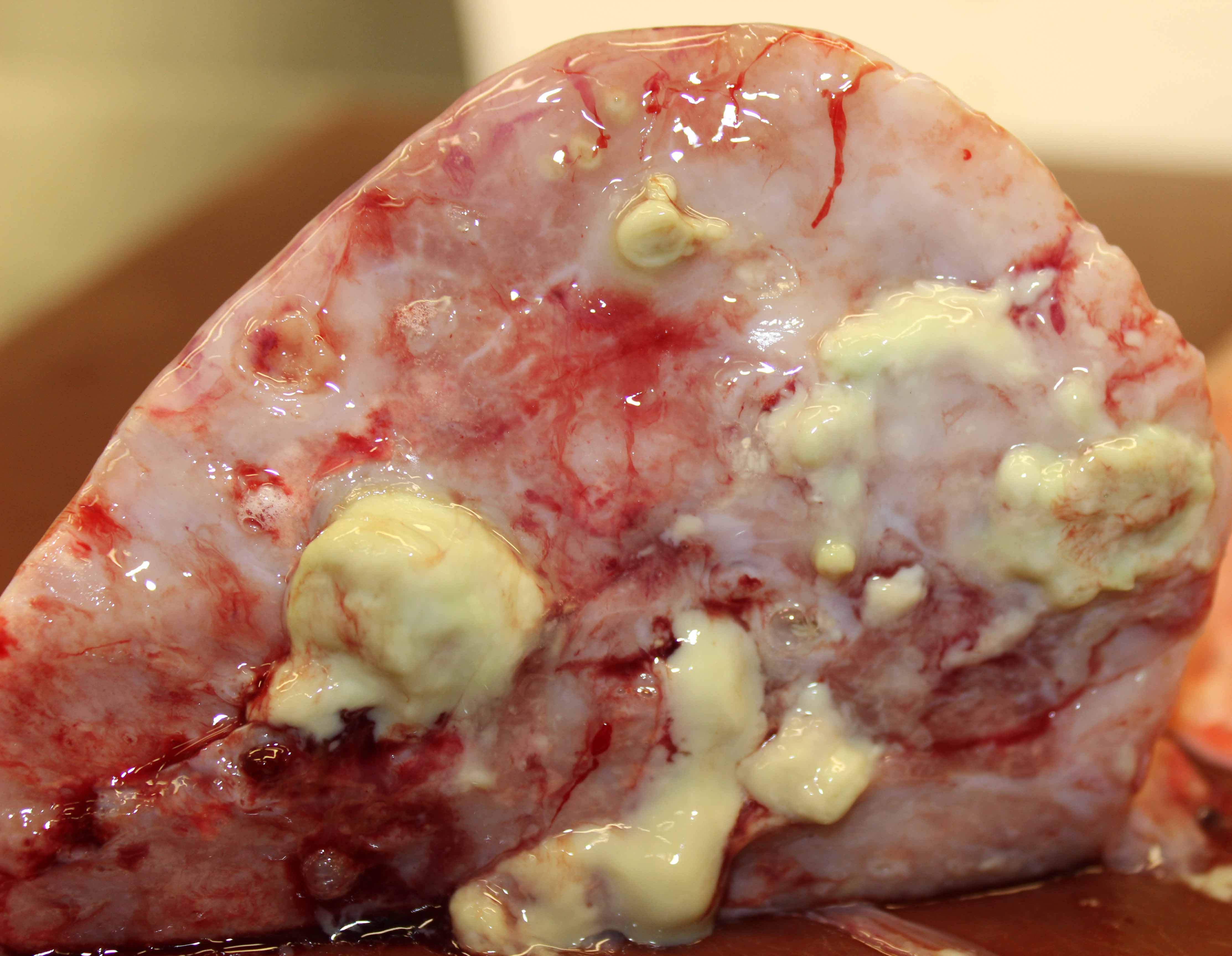 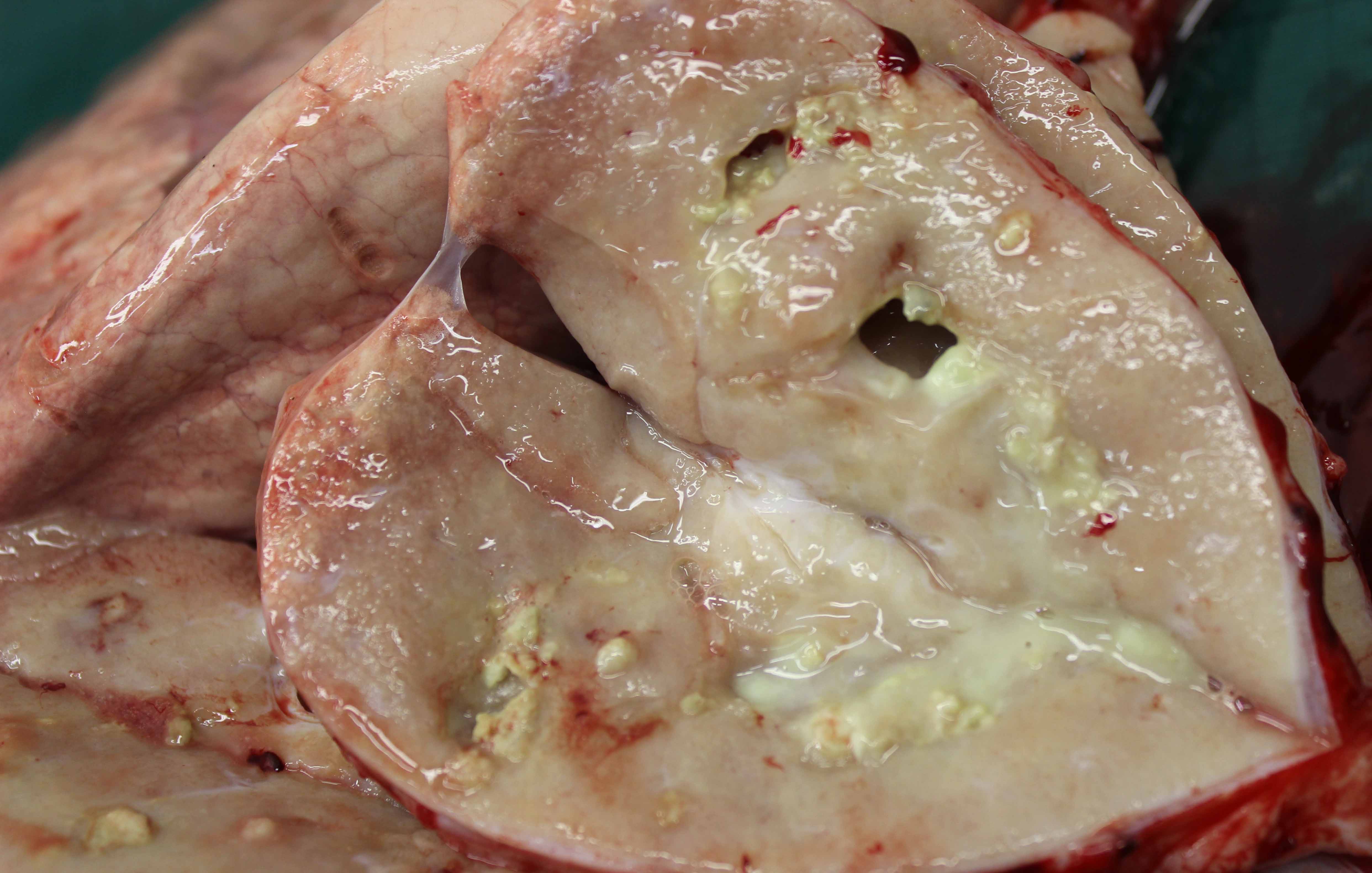 Two separate errors were generated in the ultrasound diagnosis OPA in this study; namely 1-3 cm lesions of lung consolidation associated with lungworm (Muellerius capillaris) infestation and secondly, extensive lung consolidation associated with marked secondary abscessation.  The first error could be overcome by not considering such small lesions as OPA and repeat scanning such small lesions after 3-6 months where there would progression of the lesion if OPA but not with lungworm lesions. Biocontainment is poor on most sheep farms especially for small numbers of sheep, and the farmers in this study simply wanted to remove all suspected OPA cases.  Sheep in the second category with extensive lung pathology would have been culled because they would likely have been unproductive. There are few reports of such extensive lung consolidation and abscessation in the absence of OPA.

The surface of normal aerated lung (visceral or pulmonary pleura) is characterised by the continuous (across the whole image) white linear echo which moves in time with respiration. 5MHz sector (micro-convex) scanner.  The probe head is at the top of the image, dorsal is to the left, centimetre markers in the right hand margin.  The heart can be identified at the ventral margin of the lung lobes immediately beneath the chest wall.  The heart is clearly imaged towards the end of this recording.  For sheep within a weight range from 30 to 100 kg, the field depth is set at 6 cm and increased when there is lung pathology present. 6.5MHz sector scanner.

The surface of normal aerated lung (visceral or pulmonary pleura) is characterised by the uppermost white linear echo which moves in time with respiration. 5MHz sector scanner.  The probe head is at the top of the image, dorsal is to the left, centimetre markers in the right hand margin. The field depth is set at 6 cm including chest wall. This recording was taken over the 5th -7th intercostal spaces. 6.5MHz sector scanner.

Loss of the bright linear echo formed by normal aerated lung tissue (visceral or pulmonary pleura) at the ventral margin of the lung lobe replaced by a 2 cm deep hypoechoic area representing a very early OPA lesion. The heart is clearly visible ventrally (to the right).  6.5MHz sector scanner.

Abrupt loss of the bright linear echo formed by normal aerated lung tissue at the ventral margin of the lung lobe replaced by a 3-4 cm deep hypoechoic area representing an early OPA lesion. The heart is clearly visible distally at the end of the recording.  6.5MHz sector scanner.

Sharply demarcated area of consolidation dorsally representing OPA tumour extending for approximately 6 cm into the lung parenchyma. The heart (represented by the anechoic area in the bottom right of the sonogram) is displaced by the tumour mass ventrally. 6.5MHz sector scanner.

Purchase of OPA-infected but clinically normal breeding replacement stock (both ewes and rams) is the major risk factor for introducing OPA into clean flocks.  Ideally, breeding replacements would be obtained from flocks declared free of OPA but confirmation of such status in the absence of commercially available tests is not possible. Best practice is to identify and cull out sheep with any sign of the disease as early as possible. Some flocks impose a harsh policy to try to reduce the incidence of OPA where they cull thin, tachypnoeic or coughing sheep.  Culling out on the basis of weight loss and respiratory signs inevitably means that a proportion of the sheep culled will not in fact have OPA.

Ultrasound screening would allow more accurate selection. In addition, detection of OPA lesions by ultrasound examination should allow culling at an earlier stage than recognition of clinical signs by the farmer, and would permit culling while the sheep is still in good body condition, is fit to travel and has greater value for slaughter.  In addition, the ability to identify affected animals at an earlier stage will be a positive step forward in reducing transmission of JSRV.  Tumour cells produce the virus and release it into the respiratory secretions, so sheep with larger tumours are likely to be a greater risk for transmission to other sheep.

Prevention of spread from neighbouring premises can be effected by maintaining a closed disease-free flock with double ring fencing around the perimeter of the farm.

Biocontainment - the main route of infection is by respiratory aerosol with close confinement during housing or trough feeding increasing the rate of spread of infection therefore housing must only be undertaken if essential for flock management purposes. Maintaining sheep in single age groups has been shown to be the most important management factor in reducing clinical disease. 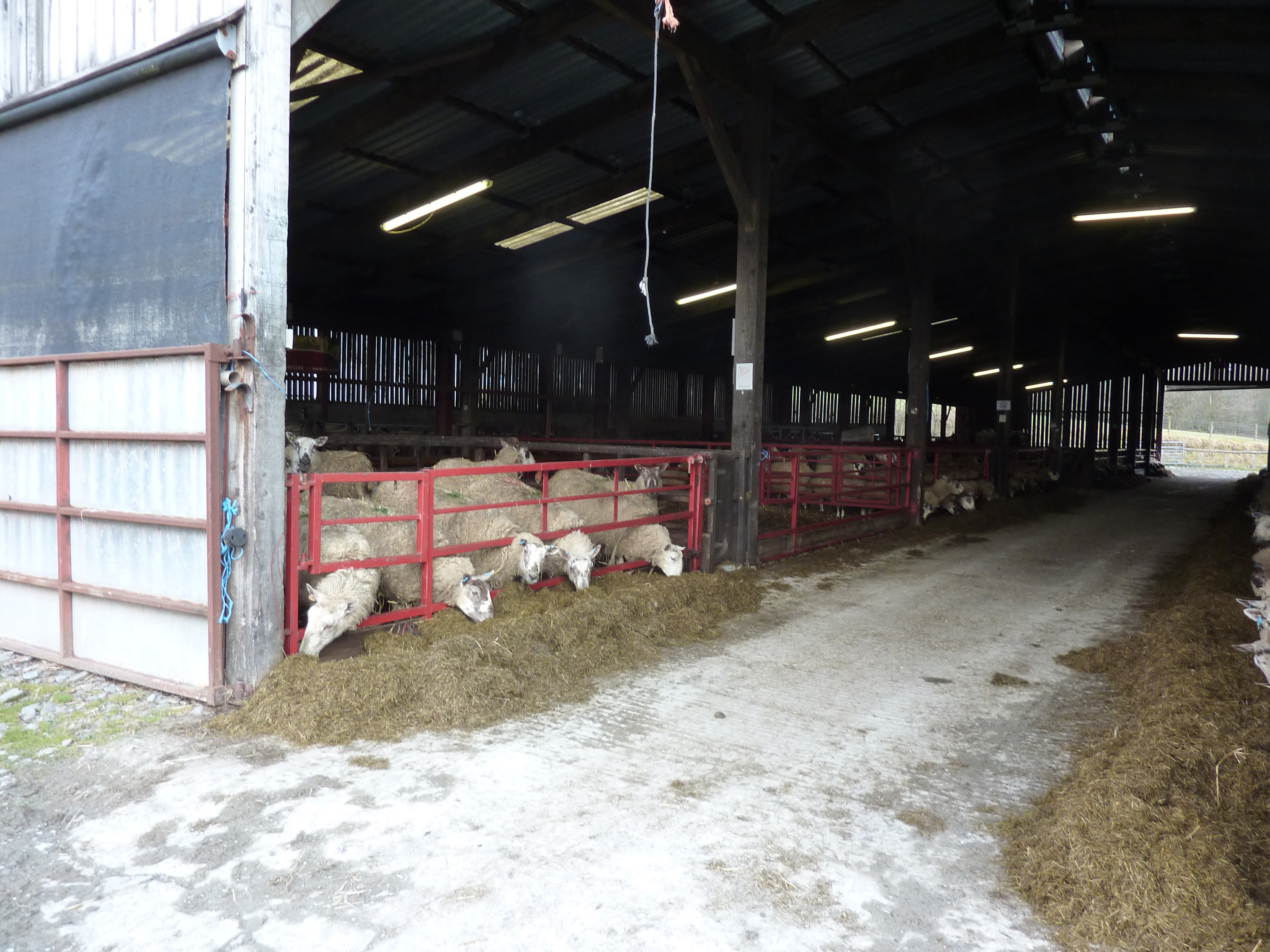 Maintain sheep in single age groups has been shown to be the most important management factor in reducing clinical OPA.