While sheep scab is the most important skin infestation, farmers must also be aware of the other ectoparasite infestations that can affect their sheep causing financial loss and welfare concerns.  Control of all ectoparasites infestations can be achieved by strategic treatments and strict biosecurity although these principles of disease control appear to have been largely forgotten in the 20+ years since the cessation of compulsory plunge dipping. Skin infestations in sheep are a major animal welfare concern.

In the UK, headfly can present a major problem during the summer months. Grazing patterns are disturbed and affected sheep often isolate themselves and remain in shade where available.  They may stand with the head held lowered with frequent head shaking and ear movements.  Alternatively, sheep adopt a submissive posture in sternal recumbency with the neck extended and the head held on the ground.  Kicking at the head often greatly exacerbates damage caused by headflies and such action may also traumatise the skin of the neck and ears. The impact of headfly worry on sheep welfare must not be underestimated.  Fleece quality is adversely affected and the loss of body condition sheep experience will reduce ovulation rate in the autumn and subsequent litter size costing the farmer money. 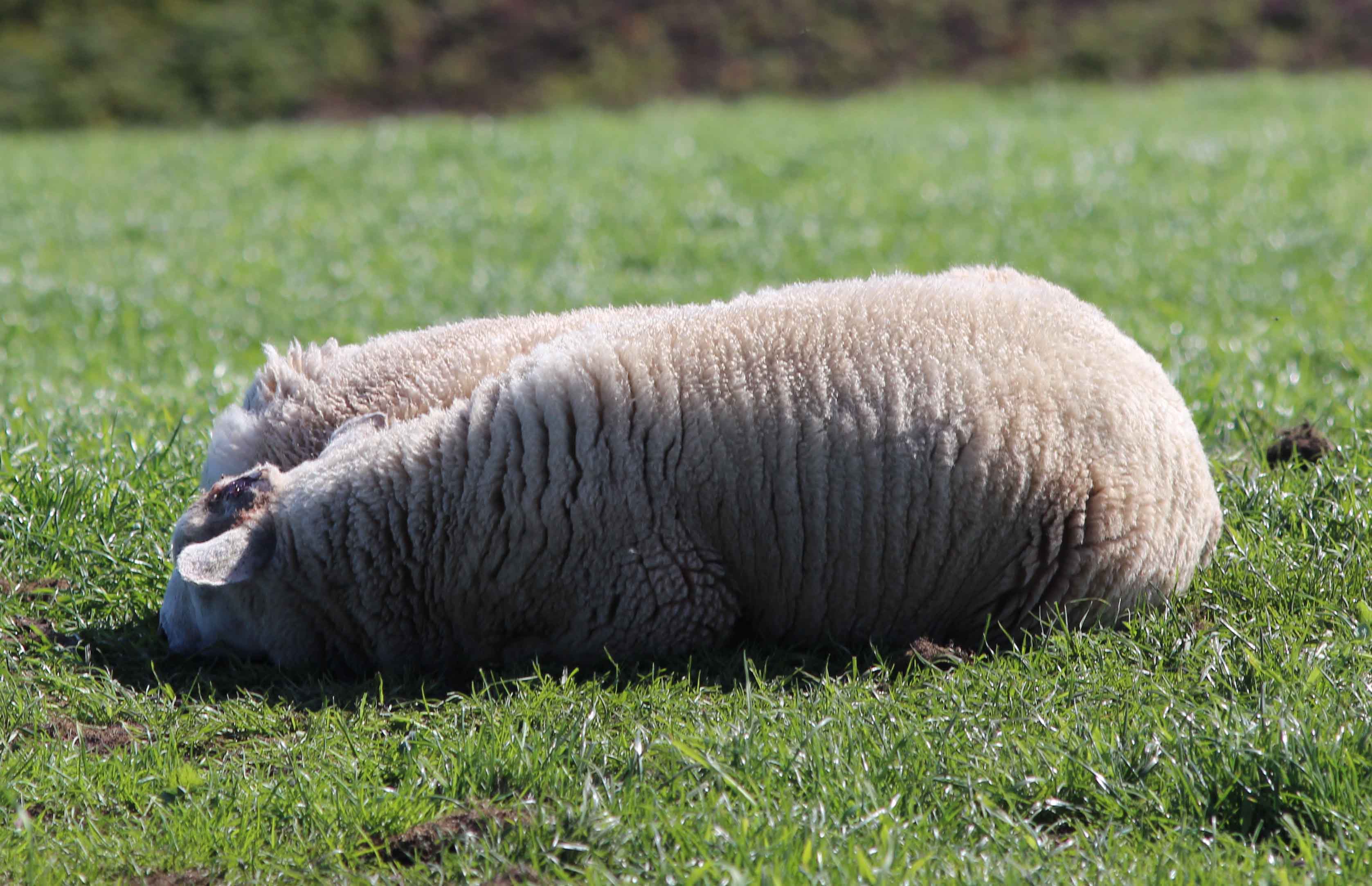 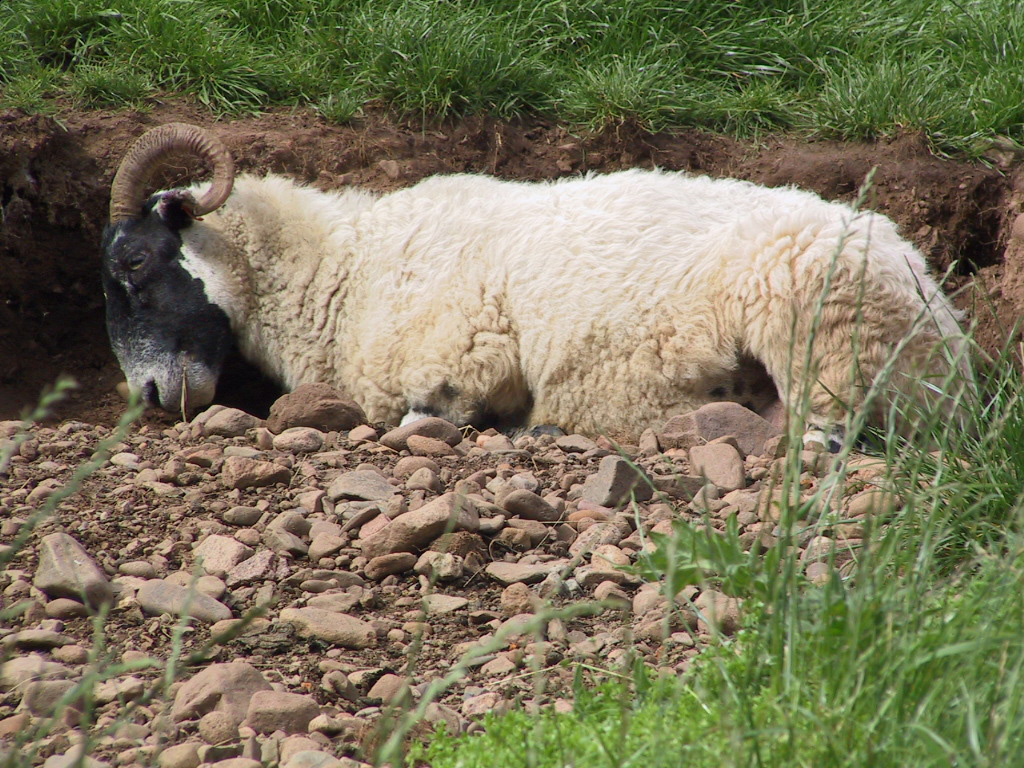 Abnormal behaviour shown by this Blackface ewe is caused by headflies. Condition loss during the summer can cause poor ovulation and reduced litter size at lambing time.

Topical emollients and antibiotic preparations are not usually necessary and skin wounds heal well provided the flies are denied access to these areas. Housing is essential for sheep with large skin lesions to allow time for complete healing.  Ear tagging and notching must be undertaken carefully and not during the fly season.

Housing is essential for sheep with large skin lesions to allow time for complete healing. Sheep must not be banished to hill ground on the expectation that there will be no flies there.

Pour-on fly control preparations, such as high cis cypermethrin or deltamethrin, must be applied before the anticipated headfly season and especially to horned sheep with re-application as directed by the manufacturer's instructions.

Louse populations are highest during late winter in sheep in poor body condition kept under unhygienic conditions rather than the reverse situation where lice cause debility.  The chewing louse Bovicola ovis is the most common infestation and may cause disrupted feeding patterns, fleece damage/loss, and self-inflicted trauma.  Spread occurs by close contact. The slow reproductive capacity of Bovicola ovis results in a gradual build-up of louse numbers over several months. 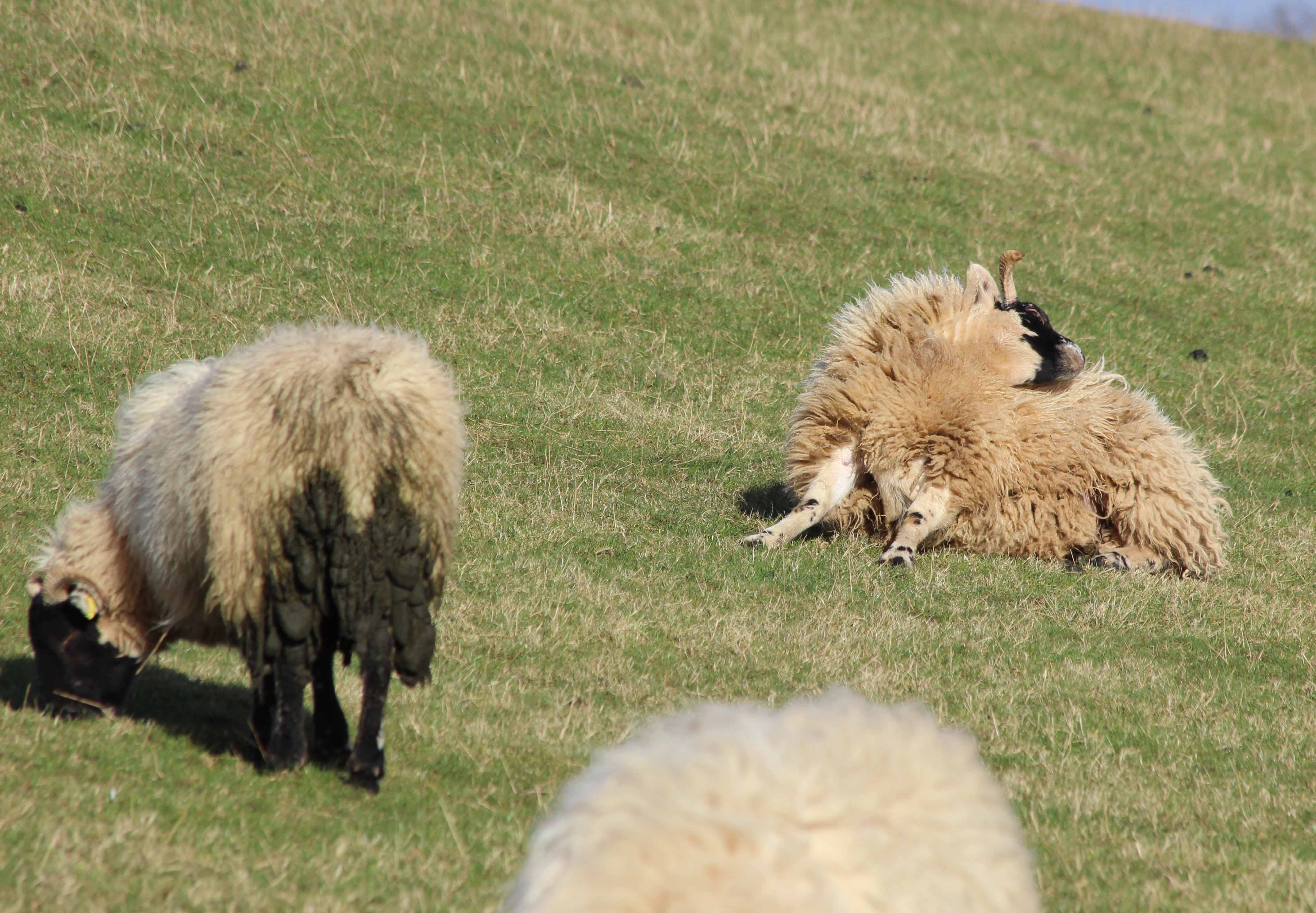 Louse populations are highest during late winter and may cause disrupted feeding patterns, fleece damage/loss, and self-inflicted trauma. Note also the faecal staining on the tail of the ewe lamb on the left 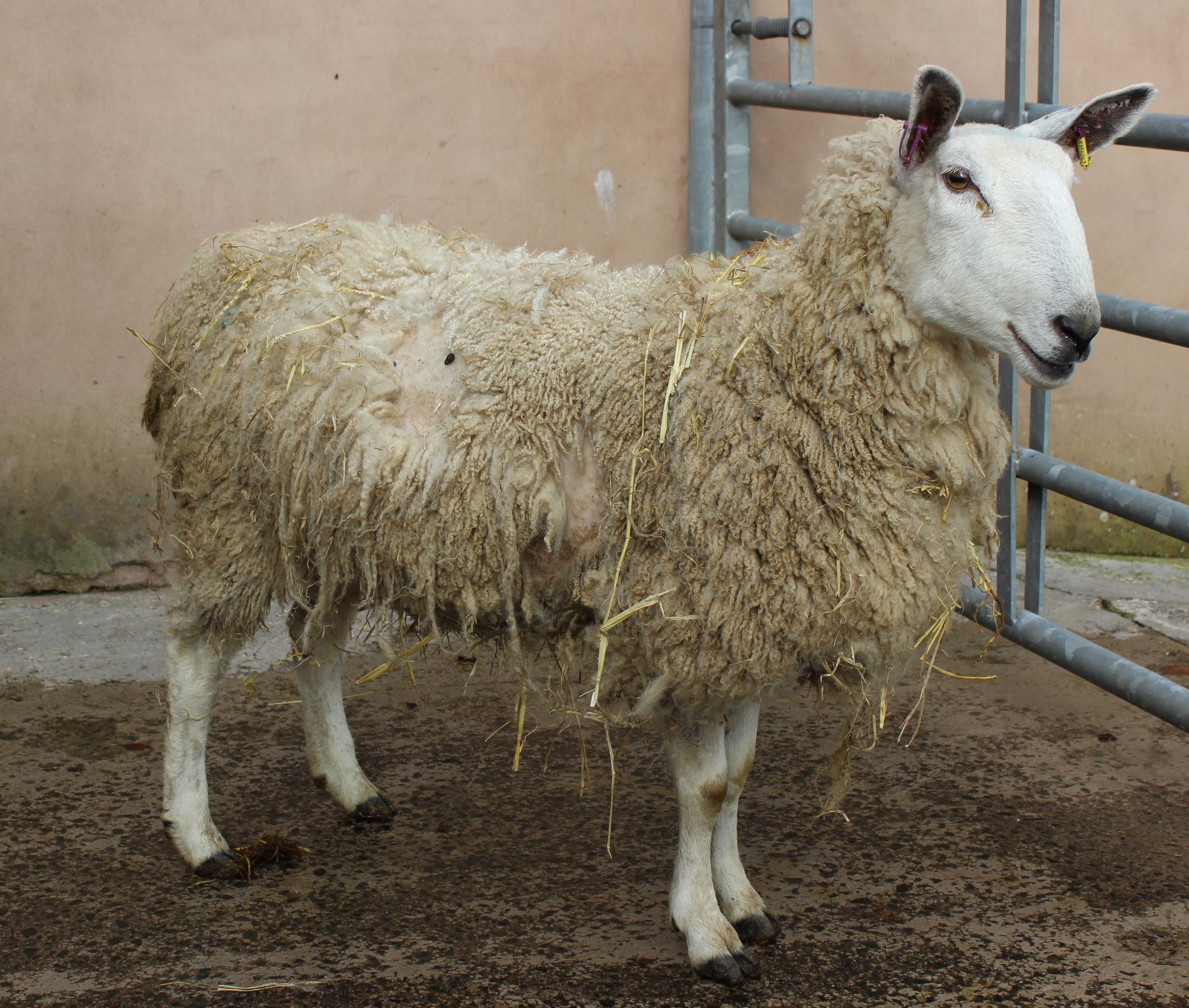 The important differential diagnosis for flock problems of pruritus and fleece loss is psoroptic mange (sheep scab).   Reliance on systemic endectocides to control sheep scab has resulted in an upsurge of louse infestations in sheep flocks in the UK.  Maintenance of a closed flock and effective biosecurity measures would prevent introduction of louse infestation. 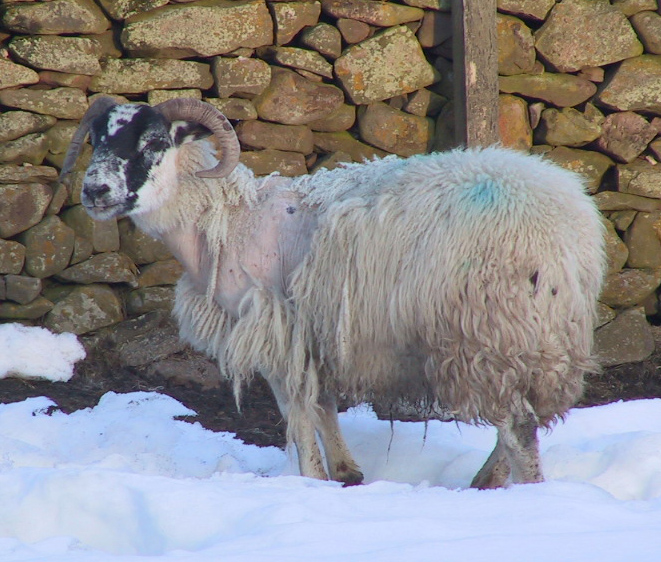 Louse infestation can be readily eliminated by plunge dipping using an organophosphate preparation.  Use of plunge dipping for other reasons, such as control of sheep scab, cutaneous myiasis and headfly problems, also effectively controls louse infestations.  Louse infestations can also be controlled with topical application of high cis cypermethrin or deltamethrin.  The presence of lice on sheep reflects poorly upon biosecurity measures and the overall flock health plan and such infestation must prompt a review of these processes before more serious and costly infections are introduced. 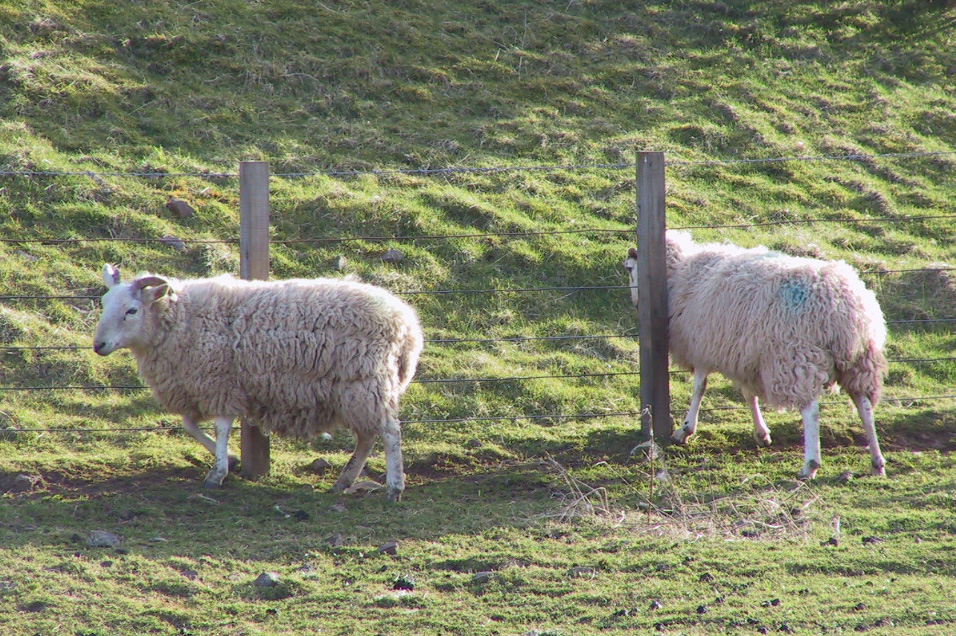