Discharge from the vulva of the sow can arise from anywhere in the urogenital tract - from the vagina, cervix or uterus or from the bladder or kidneys - and can take many different forms.

Not all vaginal discharges are abnormal.  Clear mucoid discharge is a normal part of oestrous (most obvious in gilts) and a "cleaning out" of the remnants of pregnancy (lochia) in the first few days after farrowing can be viewed as normal.

However, of significant concern to the pig farmer are those discharges that occur 2-3 weeks after service and precede a return to service.  In these cases, the discharge can be anything from a milky white watery fluid through to creamy tacky pus and, in extremes, a foul smelling thick discharge with the consistency of cottage cheese with or without blood in it. 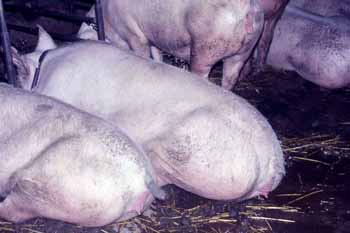 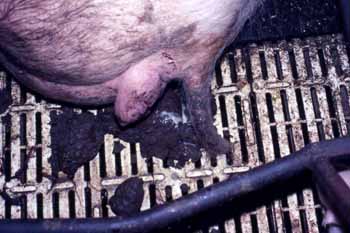 Fig 2: Discharge after farrowing can be quite normal as the uterus is cleared out of the remnants of pregnancy 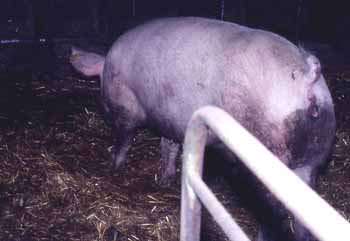 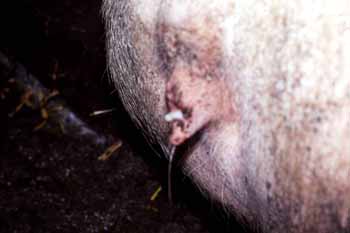 Both the prepuce of the boar and the vagina of the sow are "dirty" areas with high concentration of bacteria, many of which are simple environmental contaminants. In older sows, the anatomy of the vagina may be such that pools of purulent material remain in the upper vagina close to the cervix permanently.  In addition, the vagina is open to the environment and vulnerable to faecal contamination.

During service, infection that is present on the lips of the vulva, within the vagina or on the boar's penis, may be carried through into the cervix.  In the early and peak stages of oestrous, the uterus is very hostile to bacteria and the chances of any introduced organism colonising the tract are low.  However, at the latter end of oestrous, conditions change and it is far easier for these organisms to remain and multiply within the uterus.

They then have the potential to kill eggs and developing embryos or to set up an inflammatory reaction in the wall of the uterus (endometritis), rendering it incapable of allowing embryonic attachment at 14 days.  In both cases, pregnancy may fail. If not, litter size may be depressed.

Whilst the vast majority of vulval discharges arise from opportunist infection, there are occasional problems encountered with specific infectious agents (Leptospira, Klebsiella and possibly Chlamydophila), although the development of the condition is fundamentally the same in all cases.

Often the first indication of a problem is a rise in returns to service, either at 3 weeks or delayed to 25-28 days.  Careful observation of sows from 16 days post service will often reveal evidence of discharge from the vulva, although this may be in such small quantities as to only be detected by parting the lip of the vulva and looking.  It is much more difficult to detect discharges in loose housed systems than was previously the case in confined (stall or tethered) systems.

Very rarely will the sow show any other signs of ill health i.e. the problem is isolated purely to the reproductive tract.  In severe herd outbreaks, 20% or more of sows can be affected. Some reports suggest that mouldy feed/straw contaminated with mycotoxins may be associated with discharge problems.

Once the discharge is noted, the damage is done and, whilst not all sows will return to service (if the origin of the discharge is only the vagina or cervix) it is too late to prevent pregnancy failure.

Culling of the culprit is probably the best approach, although this may compromise service targets in severely affected herds.

Treatment of the discharge prior to re-service either systemically (by injection) or locally by instilling appropriate antibiotics - as prescribed by the veterinary surgeon under the cascade system -  directly into the vagina may help reduce the risks of further failure. It should be noted that the small amounts of antibiotic often included in doses of semen for AI are designed to stop multiplication of bacteria in storage; they are insufficient to treat infection in the uterus of an inseminated sow.

Clearly, the aim must be to prevent development of intrauterine infection at or around service and a number of factors must be considered.

The boar possesses a preputial sac or diverticulum which accumulates urine, semen and environmental contaminants and may act as a reservoir of infection at service. Some stockmen will routinely express the accumulated contents prior to mating and in some countries surgical removal of this sac has been advocated. (The sac can become ulcerated and a source of bleeding). In herds with high levels of discharges regular treatment of this sac with topical antibiotics (off licence under the prescribing cascade) may be useful

Hygiene after service. Sows sat in faeces continue to be at risk from ascending infection until cervix seals - probably for the first 10-14 days.  Again, attention to hygiene of accommodation is critical.  It should be noted that in warmer, humid weather, contamination is far more likely to occur and probably accounts for a higher incidence of discharge in summer months.

Regular washing and disinfection of the boar pens, service area and early gestation accommodation are rarely practiced on most farms, but are a necessary part of the control strategy.

Service Techniques.  AI use can considerably reduce discharges provided insemination technique is sound.  Likewise, avoiding cross mating with boars can help as can separating the herd into "clean" and "dirty" populations, keeping young "clean" boars to serve gilts and young "clean" sows, whilst the older contaminated boars are only used on "dirty" older sows.

Culling. Removal of previously affected animals and use of records to highlight any age related increase in incidence are a vital part of the control strategy.

Medication. Various techniques at medication are appropriate under veterinary advice.  Medication can be applied via feed - although the dose rate must take into account the weight of the sow and her feed level. Low dose medication is of dubious value and may contribute to the development of antibiotic resistance. The routine medication of sows eg twice per year is not regarded as responsible use of antibiotics and should be avoided. Individual treatments, either by injection or intra-vaginal instillation at service may also be appropriate in the short term but should never be used as a prop to hide poor hygiene.  Likewise, treatment of boars via feed, injection or local treatment of the prepuce (under the prescribing cascade) could also be considered.  The advising veterinary surgeon will identify the most appropriate programme for each herd.

In the last 15 years the perceived incidence of discharge associated returns to service have drastically fallen.  It is not at all clear whether the time incidence/prevalence of problems have declined since stalls and tethers were removed, or whether it is simply much more difficult, particularly given time pressures on staff, to detect discharge in loose housed sows.  The increased use of AI and lower levels of natural cross mating may have also played a part in reducing contamination. Herds which continue to struggle to exceed 80% farrowing rates may suggest that contamination around service is still significant and should be investigated.

As an example of the cost of discharge returns, a 300 sow herd suffering an incidence of 15% discharge post service can experience a drop in farrowing index of 0.25 over a year (from 2.35 to 2.10).  In such a herd this gives a shortfall of 75 farrowings for the year or 750 pigs weaned.  For a breeder feeder farm each of these pigs carries the fixed costs of production and the lost profit, equating to approx. £40/pig (expected realisation on sale minus saved feed water and medication). This represents a staggering £30,000/year in losses for a 300 sow herd.