At the end of the 20th Century close confinement of sows during pregnancy in stalls or by way of a tether was totally banned in the UK (except for short periods for feeding, veterinary examination etc).

The ban has subsequently been extended to the whole of the EU although in many countries close confinement of pregnant sows is still permitted for the first 4 weeks after service. Whilst intended as a measure to improve sows' welfare by allowing greater freedom to express 'normal' behaviour, it has allowed far greater interaction between sows and in particular aggressive interaction. As a result, damage to the vulvas of sows by way of biting has become a significant problem on some farms with surveillance data suggesting that at any one time 1.5-2% of sows seen have active (i.e. recent) damage to their vulvas. Many more have healed scars in the vulval tissue. Many different feeding systems are used but vulva biting is seen with all types of feed provision (e.g ESF, drop feeders, individual feeders etc). It is more prevalent in indoor situations but can be seen outdoors. This paper will summarise the condition and look at possible causes and measures that can be taken to alleviate the extent of the problem. 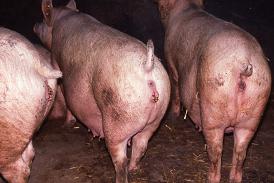 The first sign often noted within a yard or pen is blood staining on the bodies or noses of sows or on the walls of the pen. Closer observation will reveal damage to the vulva of one or more sows that can range from a mild lesion with minimal bleeding up to virtual shredding of the vulva and major haemorrhage. In extreme cases the haemorrhage can lead to collapse or even death of the sow but this is unusual. In most instances the sow demonstrates little evidence of distress. As a general rule, the more swollen the vulva is, the more likely it will be bitten eg as farrowing approaches and as such, there will be a greater blood supply to the tissues exacerbating the haemorrhage. 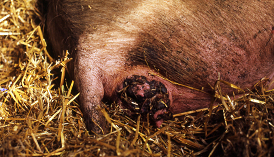 Fig 2: Severe vulva biting can lead to problems at farrowing

Assuming non-fatal haemorrhage occurs, the healing process of deep wounds will lead to scarring which can interfere with subsequent farrowing, leading to obstruction and stillbirths or if more severe, tearing of the vulva during farrowing. Scarring may also interfere with subsequent service - especially if natural service is used - and the deformation created can lead to dysfunction of the protective mechanism of the urogenital tract potentially leading to ascending infection of the bladder and kidneys (cystitis/ pyelonephritis) or the vagina and uterus. Serious systemic illness or infertility will be natural consequences. Sows that have been previously bitten are more likely to return to service at the next litter.

It is very rare for biting damage to extend into the anus and recto-anal function is not usually disturbed. 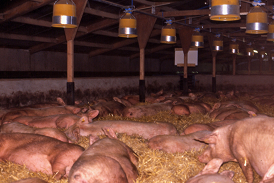 Fig 3: Large dynamic groups can be more vulnerable to vulva biting even if feed distribution is good

A wide range of factors have been identified which have been implicated as trigger factors although there is rarely one single factor involved.

Vulva biting is an act of aggression by other sows. As such, genetically determined behaviour may play a part; behaviour patterns may relate to breeds, families or individuals that are naturally aggressive and will attack each other.

Any factor which increases swelling of the vulva may make it more attractive to other sows; thus, late pregnancy, oestrus and extraneous hormonal stimulation - such as occurs with the mycotoxin zeralenone - may all render the sow more vulnerable to being bitten. However, features related to environment and management can often act as trigger factors.

1. Pen design and feed availability - Any factor which inhibits all sows gaining access to feed can frustrate and lead to aggression. Such factors may include:

3. Other contributing factors have been identified as:

Prevention and control of vulva biting can be very challenging particularly if structural environment is implicated. Vulva biting is a direct consequence of loose housing allowing sows to interact with each other. 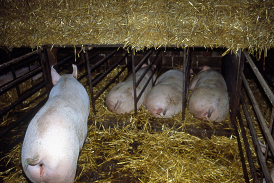 At the planning stages aim to:

On a day to day basis:

Additional measures to reduce aggression can include increasing gut fill by:

Badly injured sows should be removed to a single hospital pen. Individual treatment with broad spectrum antibiotics and analgesics may be appropriate. Animals should be clearly identified as potential problems at farrowing and if necessary surgical excision of a scarred obstructed vulva (episiotomy) should be performed rather than allowing the vulva to tear naturally.

Little information is available on the financial costs of vulva biting to the pig industry although premature culling is an inevitable consequence in badly damaged sows.

Of far greater significance is the welfare cost to the sow which should always be a primary concern to the stockman and pig farmer.

Comments made in this paper are based on the practical clinical experiences of the author working in the field and opinions expressed are derived from those experiences; others may have different experiences.