Sudden death in the growing pig is a not uncommon finding in the modern pig herd.  One of the most common causes of such losses is rotation of the intestine within the abdomen about all or part of its attachment to the body underneath the spinal column.

Such a twist will cut off the blood supply to the gut, causing gangrene and rapid death.  The condition may be seen sporadically or in outbreaks.  Adult animals, whilst occasionally susceptible to torsion of the intestine, are more likely to suffer gastric dilation and torsion, which is equally fatal. 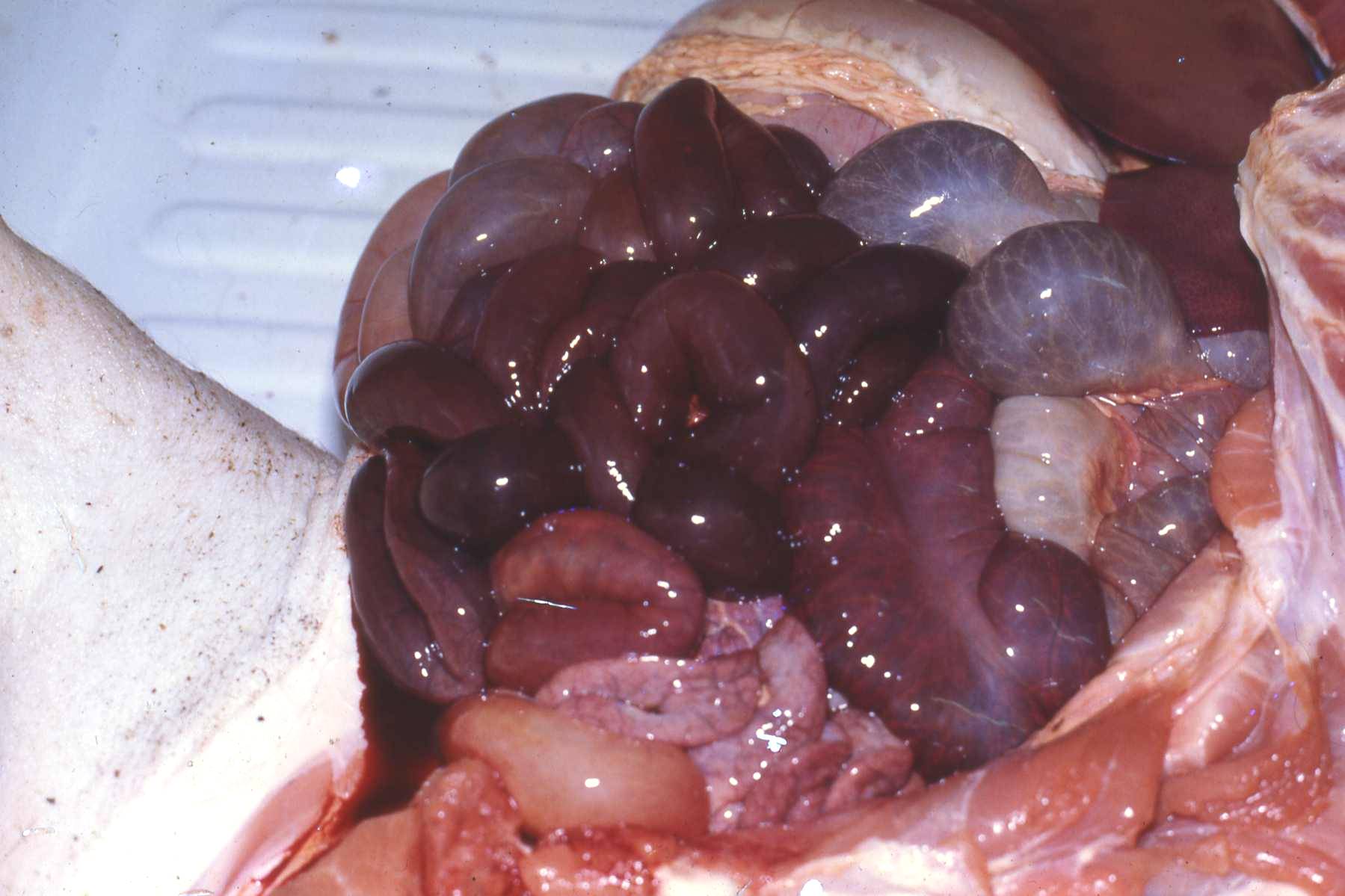 Fig 1: Typical infected gut secondary to torsion of the intestine 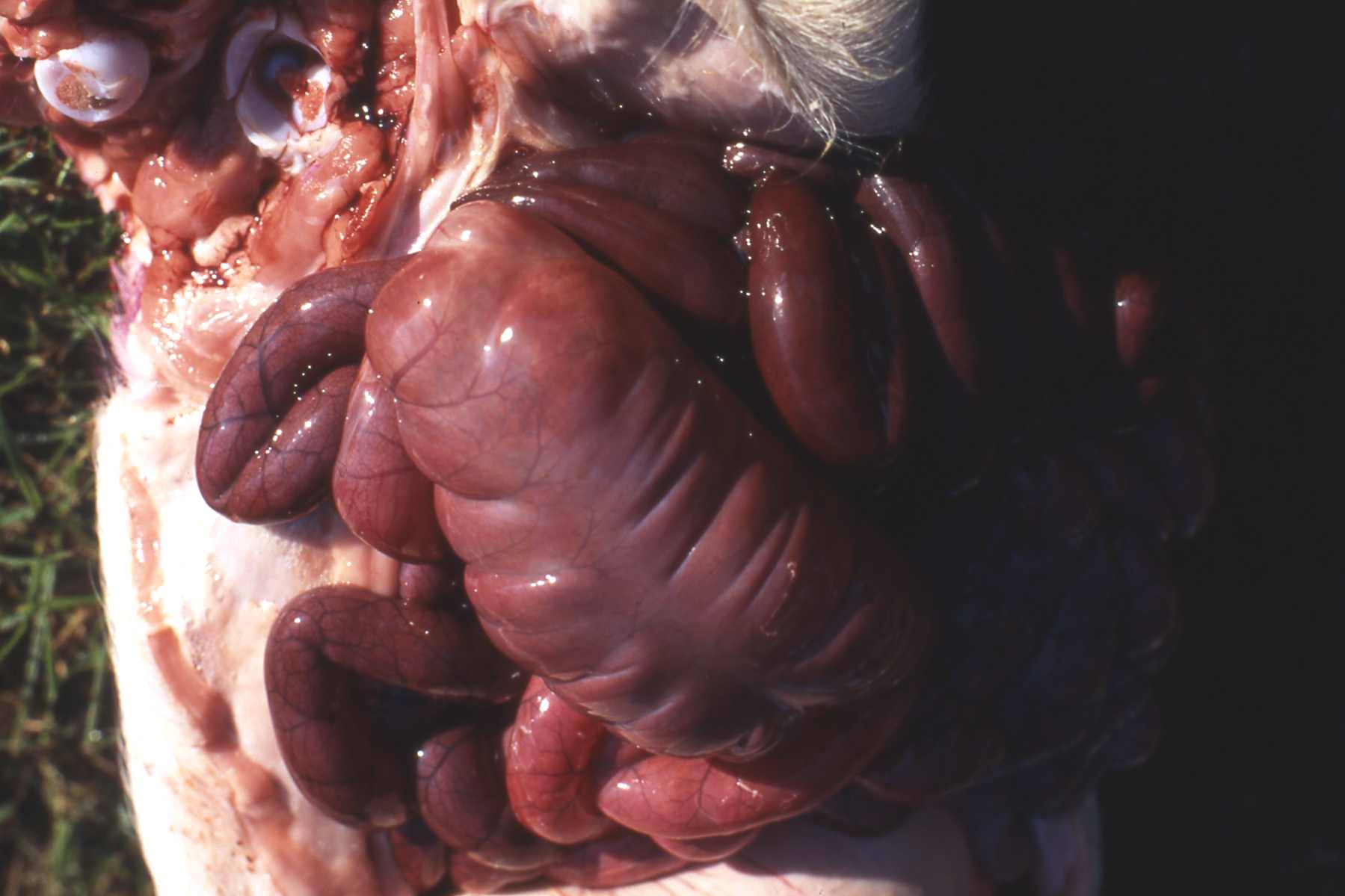 Fig 2: In the twisted gut the caecum is pointing in the opposite direction to normal 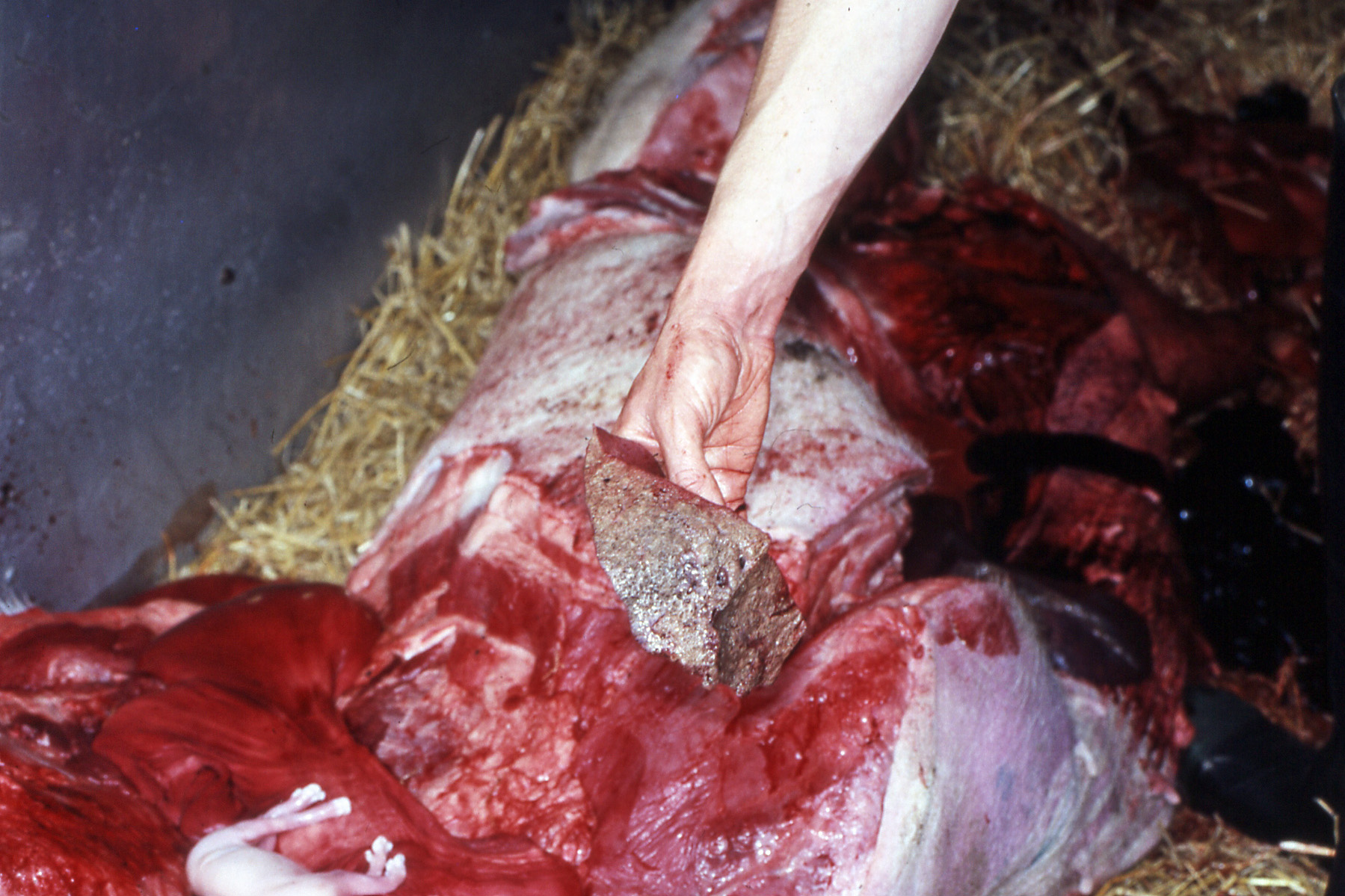 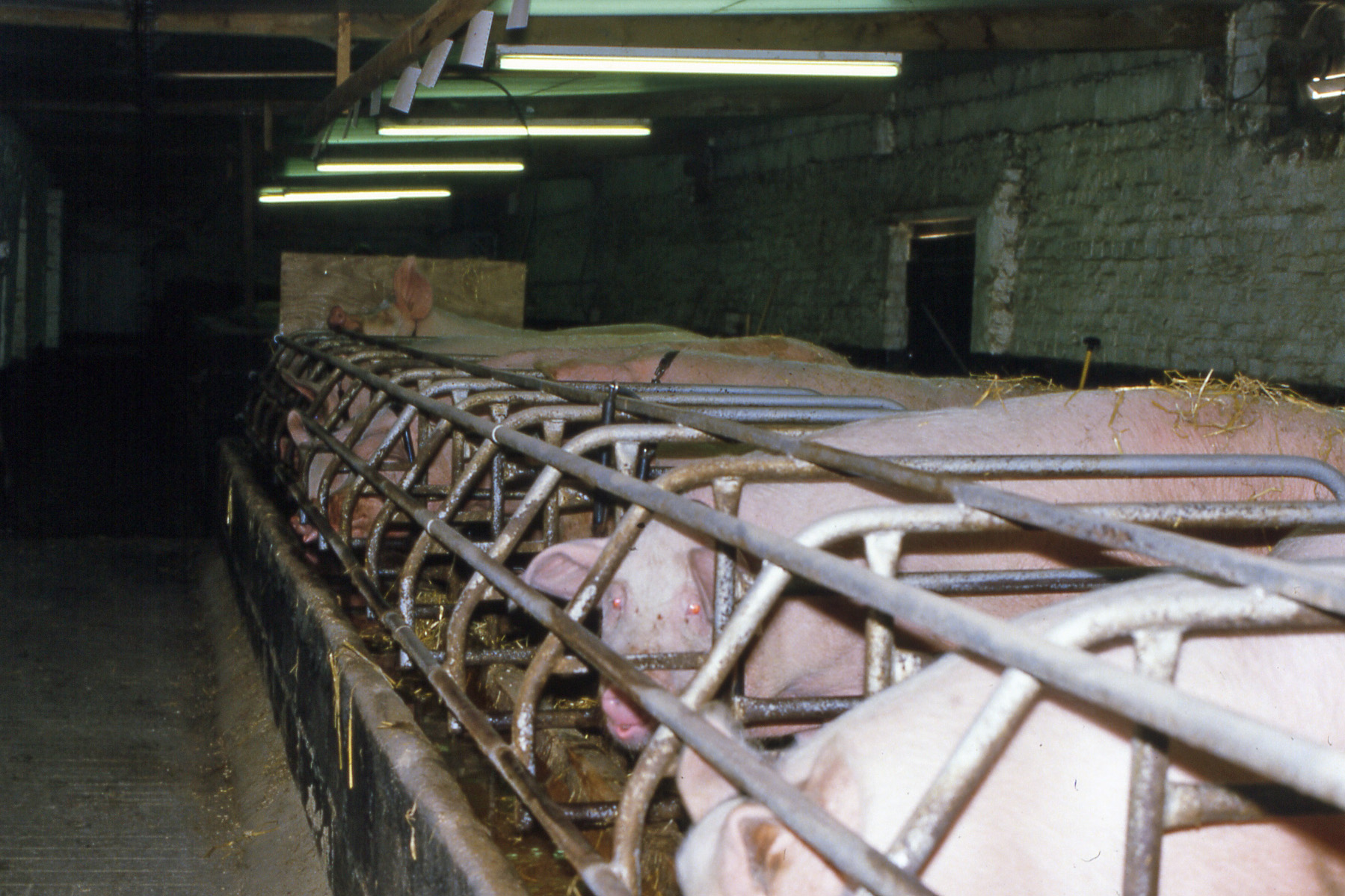 Fig 4: Dry sows in stalls and tether were particular problems with gastric dilation and torsion

In most cases pigs will be found dead. It can occur at any age, although most commonly in the grower stage between 25 and 100kg.  The typical case will have a grossly swollen abdomen often with the rectum protruding and will rapidly discolour and decompose.  The whole carcass will be pale. Post mortem examination is essential

The wall of the gut is thin, differentiating it from acute Porcine Intestinal Adenomatosis/Proliferative Haemorrhagic Enteropathy.  There is usually an accumulation of bloody fluid free in the abdomen.  Depending on how much of the gut has twisted, a palpable or even visible knot can be found in the suspensory tissues that normally hold the gut.  Twists involving the whole of the intestine can be fully 360°, although usually are less and, as such, the most obvious part of the gut - the caecum - will not be pointing towards the pelvis and anus which is its normal orientation (Fig 2).

Just occasionally pigs may be noticed prior to death, during which time they will be pale, depressed, inactive and, if very early, showing signs of severe pain.  They will tend to lie in sternal recumbency with a hunched aspect.  Teeth grinding - a sign of pain - may be evident.  Once the gut tissue has died inside, the pain passes and death is peaceful.

The pig is particularly susceptible to torsion of the gut and, as such, can be viewed as a "design fault" that is seen equally in boars and gilts.  The whole of the gut is attached to the body by a suspensory mechanism called the mesentery, which connects the 20m or so of gut loops to the underside of the spinal column within the abdomen over a length of a few centimetres.  It is, thus, fundamentally unstable.  The prelude to a twist is likely to be excessive filling of all or part of the gut with gas, increasing the instability of the gut as it hangs down in the abdomen.  Sudden movements then allow the gut loops to rotate and cause a constrictive twist.  Therefore, the basic causes of twisted guts are conditions which encourage gas development in gut.

These can be listed as:-

2) Winter feeding of fermentable wet feed e.g. whey - in summer the higher storage temperatures allows some fermentation before feeding reducing gas production in the gut.  This process is reversed in the winter.

3) Erratic feeding, especially but not exclusively on wet feed.  Where feed supply is interrupted e.g. at weekends, following pipe breakdowns or freezing up, a surge of twisted guts may occur once supply is restored. Where inadequate feeder space is provided some pigs may be exposed to uneven supply and as a result  gorge on food when it is accessible. This applies in both wet and dry feed situations

5) Colitis - Where this condition exists, the proliferation of bacteria in the hindgut tends to create more feed fermentation and gas production and precipitate twists.  As a general rule twisted guts (torsion or volvulus as it is otherwise known) are more common where there is any evidence of scour in the growing pig.

Occasionally pigs will present dead with post mortem signs strongly suggestive of a torsion of the intestine but at post mortem no twist in the mesentery can be found and the orientation of the caecum is correct. Possible explanations for these cases are

A range of obscure causes of gut distention such as renal of liver failure congestive heart failure and abdominal tumour formation can occur as one off entities in individual pigs and are readily detectable at post mortem examination. In most of such cases a period of illness and lost condition will differentiate them from the acute abdominal catastrophy that a twist represents. The most common cause of abdominal distension in growing pigs is a rectal stricture which blocks the passage of faeces through the anus with a resulting bloat of the large intestine. Such pigs will progressively lose condition and will become hairy and depressed often with a distinctive yellow hue to the skin as bile is recycled in the body rather than excreted.

At post mortem examination possible confusion can arise with acute PIA/PHE (ileitis) and acute gastric ulceration in which death results from massive intraluminal haemorrhage which clots in the intestine producing a rope of clotted blood and gut content.

Control of twisted guts will obviously centre around control of feed intake, dietary manipulation and control of enteric disease.  However, given that the condition is most common in populations where feed intake and growth are high, twisted guts can be regarded as very much a production disease and perversely is often a sign that pigs are doing well.  It will therefore require careful evaluation of the cost of deaths measured against the potential loss of growth if feed levels or nutrient density are reduced.  There may be some breed influence affecting the prevalence of twisted guts but no breed type is immune.

Empirically twisted guts in individual farms have been resolved by substitution of some major dietary ingredients especially the protein sources. Where some soya is replaced by rape meal or field beans cases have ceased but such amendment must be made under the guidance of a nutritionist to ensure correct balance in the diet. Such amendments are likely to have cost implications for the diet.

Ensuring consistency of feed supply, equal access to feed for all pigs and good feed hygiene especially in wet fed piped systems are essential to minimise risk of gut fermentation. Where underlying gut disease such as colitis is seen  control of this is fundamental to reducing fermentation and secondary torsion of the intestine.

Compared to torsion of the intestine, gastric dilation - the massive over inflation of the stomach with gas - and its possible rotation to create a similar pathological process to intestinal torsion are more commonly seen in adult pigs.

Ordinarily food is not fermented in the stomach to any great degree and small amounts of gas can be belched up.  If gas production becomes excessive it gets trapped and effectively the junction between the oesophagus (gullet) and stomach closes like a valve.  (The condition is similar to that seen in certain dog breeds e.g. Basset Hound).

Whilst there is no definitive data to measure the prevalence of the condition, the clinical impression gained is that it is far less common in dry sows than was the case when sows were stalled and tethered.  In that situation, manual feeding of rows of dry sows once daily tended to led to some sows having to wait a considerable time to receive feed once the feeding cycle has started and become very agitated.  This resulted in gorging of feed, possibly swallowing large amounts of air, which started a process of gastric dilation.  However, questionable hygiene of "river" systems may have encouraged exposure to clostridial organisms, which are important in triggering fermentation. (On some farms there appeared to be an association with Clostidium novyi infection (aero chocolate liver) as a separate cause of death).

With all dry sows in the UK now loose housed and the majority on straw, the condition appears to have shifted to be more of an issue in post farrowing/early lactation, probably associated with reduction in both feed and bulk intake around this stage and a change of diet.  In some cases mycotoxins have been implicated.

Where feeding flasks are used to act as reservoirs for feeding lactating sows these are rarely cleaned and over time can accumulate stale food vulnerable to fungal growth. A programme of regularly washing such flasks as part of the room cleaning process can have significant benefits in reducing cases of gastric dilation

If spotted alive, the abdomen, particularly the forward part of it will be visibly distended and the sow will demonstrate signs of pain similar to that in growing pigs with twisted guts.

More frequently, the sow will be found dead with a hugely distended abdomen - fermentation continues or even increases after death - although palour of the carcase is not a regular feature.sAt post mortem examination, the hugely dilated stomach may be twisted (along with the spleen) and the lungs will be congested as a result of the pressure on the diaphragm. Death is usually due to this pressure build up causing either suffocation or heart failure

The availability of clean good quality barley straw provides the sow with large amounts of fibre, which seems to reduce the risk of gastric fermentation.  Provision of bran (1kg/day) over the farrowing period may help to maintain fibre intake and avoid problems if they occur around farrowing.  In the farrowing house, once lactation is well established, feeding at least 2 or even 3 times a day reduces the risk of gastric fermentation.  As always, good hygiene of feeding is also key.  (Use of clostridial vaccines alone have been shown to have little value in controlling a herd problem of gastric dilation and torsion).

Problem herds suffering ongoing cases of twisted guts in growing pigs can experience 2-3% mortality due to this alone.  If they occur in the older growing pigs - worth upwards of £100 each at 2016 prices - a 500-sow herd can lose £500/week of £25000/year.  If slowing growth is a control option this must be offset against such costs.

Outbreaks of gastric dilation and torsion have occurred (in stalls) where 10% of the herd can die over a 3-month period.  50 pregnant sows dying (at different stages of gestation) can lead to a shortfall in farrowings in the sow herd over a 6 month cycle, leaving the herd 500 pigs short plus the costs of the sow death themselves.  More commonly, this condition is seen as a low grade grumbling problem contributing up to 2% points to sow mortality over the year.  Such costs are very difficult to quantify.