Adverse reactions between mother and offspring as a result of immunological interaction is well recognised in many species.  Probably the best known example of such is the Rhesus baby syndrome in humans.  A condition of similar aetiology but different pathogenesis is seen in the pig and this is thrombocytopaenic purpura (TP). 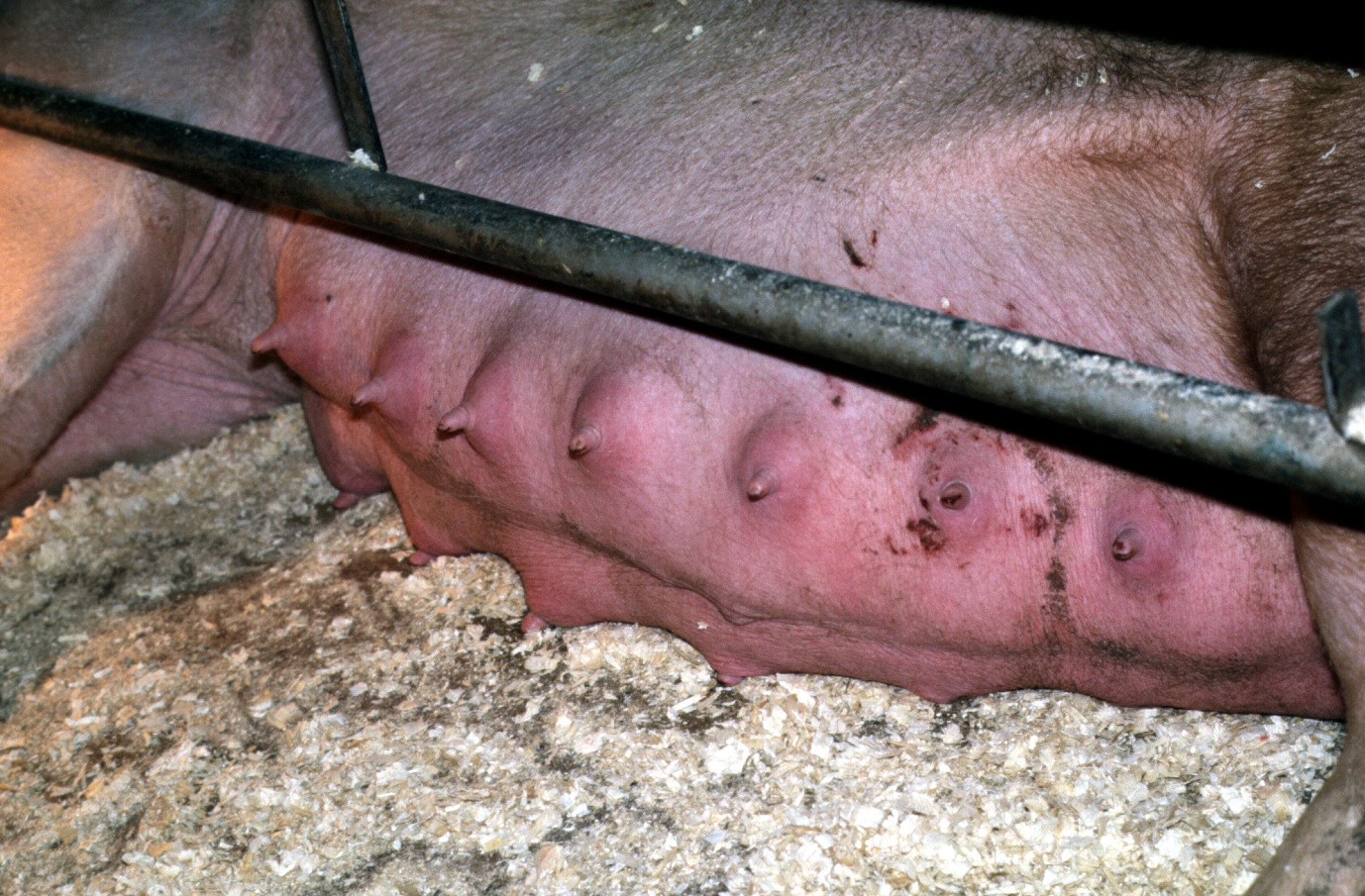 The principle presenting signs of TP is collapse and death of young piglets.  It is only seen in the progeny of sows (not gilts) although confusion can arise as a result of fostering.  The signs can be seen in 2 age brackets.  The first is unusual or rarely recognised and occurs at 3 days of age.  More commonly, it is seen around and beyond 14 days of age (10-20 days).  The whole litter can be affe cted but usually it is only part of the litter and may only affect 1 or 2 piglets often the largest ones in a litter. The issue arises as a result of IgM and IgG excreted in the colostrum and absorbed by the piglet in the first 12-24 hours of life. It is not clear why it then takes 2 weeks for the platlets to be destroyed precipitating clinical disease.  It is postulated that a two stage process occurs accounting for the different ages affected.

The diagnosis of the condition is based upon post mortem examination with signs seen as a result of haemorrhage throughout the body.  Typically, there will be subcutaneous haemorrhages over the belly and between the back legs, each a discreet patch approximately 5mm in diameter.  Occasionally, these tell-tale skin haemorrhages may be missing.

Death is due to internal haemorrhage and can occur in one or more organs.  The heart and heart sac (pericardium) may show extensive haemorrhages; similarly the intestine may be full of unclotted blood.  Accumulated unclotted blood may also be see in the spleen, kidneys, gall-bladder, intestine and lungs.  Occasionally, blood may be free in the abdomen or chest cavity. 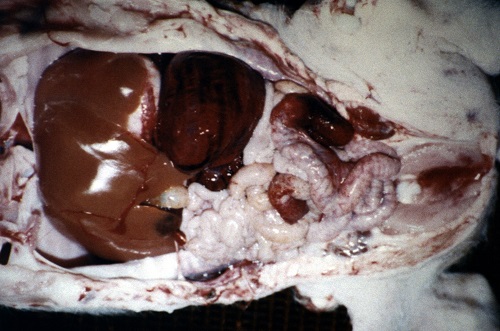 The sudden death of 2 or more pigs in a litter at the appropriate age with evidence of the typical purpuraic haemorrhages on the skin is strongly suggestive TP.  There may be a need to differentiate from a acute bacterial septicaemia which can be done by laboratory analysis.  Strep suis and particularly Actinobacillus suis can produce a picture very similar to TP.  In the latter case, the whole litter may die.  Equally, Classical Swine Fever and African Swine Fever as haemorrhagic diseases must always be considered and if they cannot be ruled out on clinical or epidemiological grounds then they should be notified to APHA as suspect cases. 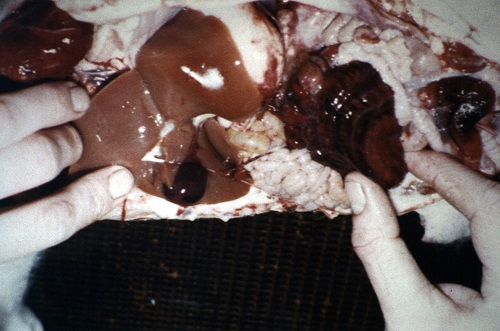 The basic cause of TP is an incompatibility between the mother and the piglet.  The process of blood clotting as a protective mechanism requires activation of proteins to form a lattice work to which blood platelets (thrombocytes) stick, forming the clot and trapping red blood cells within it.  In TP, the sow produces antibodies which, when passed to the piglet in the first day of life, attack and initially destroy the platelets, thus removing the normal clotting mechanism.  The incompatible antibodies also attack bone marrow megakaryocytes - the parent cells that produce platelets - causing delayed deficiency of platlets. (The condition can be differentiated from Rhesus syndrome in man where the mothers antibodies attack the red blood cells causing haemolytic anaemia rather than a haemorrhagic anaemia).

The sow will have been induced to produce anti-platelet antibodies by exposure to "foreign" platelets/megakaryocytes in a previous litter and the factor governing this is purely genetic i.e. the boar "throws" piglets which contain cells that the sow recognises as foreign.  It is only if similar "foreign" platelets are produced in subsequent litters that problems arise.

There is no practical treatment for affected piglets, even if recognised early; nursing may allow mildly affected animals to recover but usually death or euthanasia is the outcome as any piglet showing signs is usually totally depleted of megakayocytes.

Control rests with avoiding breeding programmes which promote the incompatibility.  In practice, in sizeable commercial farms breeding a sow to the same single boar in sequential litter is rare, purely by chance.  The use of AI also helps to avoid such issues simply as a result of the (usual) high turnover rate of AI boars in commercial studs. The progressive increase in use of AI in commercial UK pig farms may account for the fact that the disease is less common than was previously the case

The condition is, thus, generally only sporadic in nature and the variability of effect within a litter will be influenced not only by the chance passage of the offending gene from any one boar but also by the fact that most litters will be produced as a result of cross mating and, thus, piglets within any one litter are in fact often only half siblings (i.e. have different sires).

a) in smaller herds with limited numbers of boars and particularly in pedigree herds of minority breeds where in-breeding is more likely and specific breeding programmes are followed.  In such farms, if a sow produces an affected litter, it is critical that in subsequent parities, she is not served by the same boar.  If this is unavoidable, then it is necessary to "snatch" piglets from subsequent litters before sucking colostrum from their own mother and cross foster onto another sow.

b) Where farms have adopted an on farm AI collection programme particularly where homebred criss-cross breeding occurs it is possible to get a concentration of incompatible sows and boar particularly where the latter are kept typically for 18-24months.

In most cases, TP is a minor issue of negligible economic importance but potentially for these smaller pedigree or inbred lines could be quite significant.  It is less likely to occur where commercially purchased AI is used and where the terminal sire line is more genetically diverse from the dam line. The introduction and wide application of batch farrowing systems rather than weekly farrowing tend to encourage AI use and reduce the chances of repeated breeding by the same boar.