Meningitis is a relatively common disease of young pigs whereby infection leads to inflammation of the sacs that surround the brain (meninges) and produce disturbance to the nervous system. The disease is frequently fatal.

It can be caused by a wide range of bacteria which can gain access to the blood stream via wounds, tooth roots, the navel and the tonsil, which then circulate around the body, settling out in the brain. It is not uncommon for them also to settle in the joints producing an arthritis. Streptococcal Meningitis, particularly serotype 2 is capable of producing both epidemics and long term grumbling problems in herds, particularly affecting pigs in the first month after weaning.  A number of managemental and environmental factors can influence the extent and severity of an outbreak.

Strep suis strains exist as commensals in the throats of pigs and most strains are weakly or non-pathogenic. However, in circumstances where naïve pigs are introduced into a conventional health herd, disease can occur associated with these strains, particularly in the older pig. Sporadic disease has been seen due to serotypes 5 & 8 in the UK.

The earliest clinical signs will be depression, separation from the group and a vacant look. They will be appetent and often incapable of swallowing. There may well be shivering and reluctance to move and the rectal  temperature may exceed 41°C.  Untreated, within a few hours these signs will progress to the classical picture of the pig lying on its side and "galloping" with all four legs. The head may be raised back over the shoulders and the eyes will flicker out of control.  These convulsions may  be  intermittent  (often  triggered  by  stimulus such as noise or handling), or in advanced cases continuous. In the latter case, death follows rapidly. Sudden death is often reported in outbreaks, although it is likely that these are not true sudden deaths but rapidly developing cases that are not spotted e.g. overnight. "Recovered" cases may later develop large swollen joints, suggesting a full recovery has not been achieved.

Diagnosis of meningitis is made on the basis of clinical signs. However, the cause can only be identified by laboratory analysis of swabs collected from the brain of pigs dying without treatment.  The bone of the skull is removed in a sterile way and swabs and/or impression smears can be taken from the brain surface or between the main cerebral lobes A definitive diagnosis will always assist choice of therapy and longer term control measures.

With early, rapid and appropriate treatment, a recovery rate of 75% of affected weaners should be achievable.  The individual pig should be removed from the pen and placed in a quiet area with subdued lighting and soft bedding.  Antibiotics should be administered by injection - usually penicillin based products are appropriate for Streptococcal meningitis, although the farm's veterinary surgeon will advise. Some penicillin resistance in Strep suis was seen in the 1980's but more recent studies show that it is responsive to peneecillin. The more exotic and critically important antibiotics such as Ceftiofur should only be used as a absolute last resort where penicillin fails and laboratory testing support such use. It may also be advised to inject anti-inflammatory agents as well. 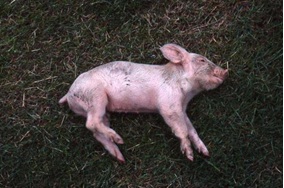 As important to recovery is the nursing care.  Fluid replacement is essential for the pig that cannot eat and drink.  Warm water and electrolytes should be supplied/administered every 2-4 hours either orally (using a syringe or hose pipe) or with care into the rectum using soft silicon piping inserted through the anus. Great care is needed administering oral fluids as frequently the swallowing reflex is lost and the fluids will be inhaled.

It should be noted that the pig that does not obtain fluids may subside into "salt poisoning", which has clinical signs similar to meningitis!  Many pigs that fail to recover from meningitis actually die of salt poisoning. 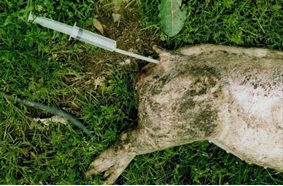 Fig 2: Per rectum rehydration may be necessary in severely affected pigs

A number of factors are known to trigger cases of meningitis and attention to these will reduce the incidence of disease:-

1) Moving and mixing - particularly at weaning.

4) Concomitant disease - there is a proven link between active PRRS and Streptococcal meningitis in weaners.

5) Any other stresses e.g. handling.

6) Mixing of age groups.  Particularly important is the back marking of  previously  affected  but  recovered older pigs.

The initial colonisation of  the  pigs'  tonsils  by  the  organism occurs in the farrowing house, either from the sow or gilt or from neighbouring piglets, particularly if there is a wide age range. The organism is commonly carried in the vagina of the sow and can be the source of initial colonisation of the young piglet. All in all out management with tight age grouping in farrowing and nursery accommodation   will   go   a   long   way to   reducing problems.

Strategic medication may be needed to stop an outbreak or provide long term control.  This can be given:-

a) Individually at weaning by injection or in anticipation of the time of disease (24-48 hours before cases occur).

c) In feed medication usually for a period of 2 or more weeks starting prior to the expected age of disease. Penicillin based products or trimethoprim/sulpha products are the medicines of choice. 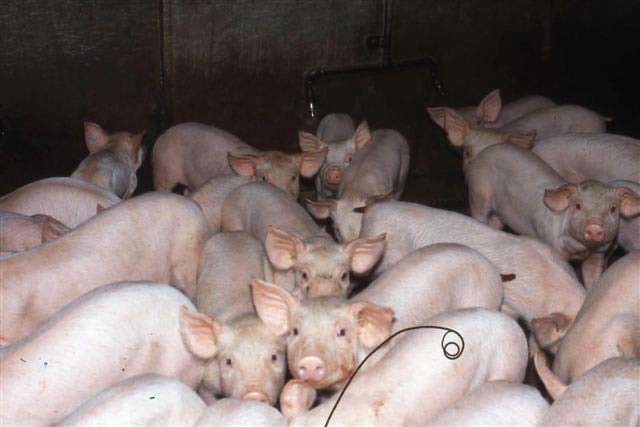 Attention to hygiene in farrowing and nursery accommodation and application of good husbandry practices should form part of the control programme.

However, in the long term it is deemed no longer acceptable to use antibiotics to control the disease and increasing interest is being shown in the application of vaccines, usually given to the sow to provide protection for the piglets. Raising maternal immunity may reduce the carriage levels of Strep suis in the sow reducing transmission but will also enhance maternally derived antibody in colostrum to protect the piglet.

A commercial vaccine protecting against Strep suis type II is available in Europe and where there is a need can be imported under a special import certificate - details available from VMD at http://www.vmd.gov.uk/.

In addition, autogenous vaccines can be produced privately under licence from herd specific isolates and administered to the pigs in that herd only, (usually the sow but if disease occurs in older pigs it may be given directly to the young piglets.) Typically, 2 doses with a 2-4 week interval is required.

As a word of caution.  Streptococcal Meningitis potentially can infect you, producing a similar disease.   It is, however, extremely rare and most likely in immune compromised individuals.   Strict personal hygiene measures must be observed when dealing with affected pigs and handling material in the farrowing house.   (The causes of the more common forms of meningitis in children and young adults - meningococci -  are completely different bacteria to those occurring in the pig).