Damage to the foot of the pig and resultant infection is a common cause of lameness and welfare problems in the pig.  Whilst seen in all age groups, the sow presents the greatest challenge due to increase weight bearing, longevity and variable nutritional status over life.  The genetic status of the sow will also play a part.

The vast majority of problems arise as a result of defects in the claw, either through abnormal and excessive growth, abrasion or a combination of the two, with secondary contamination ultimately leading to abcessation and septic laminitis (Bush Foot). The larger outer claws tend to bare most weight and are most vulnerable to damage with bush foot particularly seen affecting the outer claws of the hind limbs.

Prevention is always better than cure and attention to hoof integrity is a primary aim for all smaller pig keepers.

Fig 1:  Sectioned overgrown claw highlighting defects in the weight baring surface through which infection can track.

Fig 2:  Overgrowth and defective horn can predispose to secondary infection and bush foot.

Furthermore, in the sow moving through the reproductive cycle, her protein requirements will change.  If not fulfilled, uneven growth of horn can occur which predisposes to cracking.  Micronutrients such as biotin are vital for horn growth, with long-term deficiency causing horizontal cracks in the claws.  Zinc deficiency (often induced on Calcium - chalk rich - ground) can also affect horn quality and integrity.

Adverse environmental conditions can affect both horn growth and hoof integrity.  Whilst rough and abrasive concrete can damage the foot, of greater significance for the smallholder is more likely to be the softening effects on the hoof where the animal stands in persistently wet ground.  On flinty ground the sharp edges can add to the damage.  Chemical damage to horn can also be significant e.g. on newly laid concrete. Overall sows kept on wet rough concrete such as in old fashioned styes are particularly at risk.

In all of these scenarios two possible consequences can occur:

Any environmental contaminant bacteria can gain access through horn defect to set up the infection.  The most common organisms involved are Streptococci, Staphylococci or E coli, but a wide range of other such as Fusiformis and Trueperella (formerly Arcanobacter) pyogenes may be implicated. 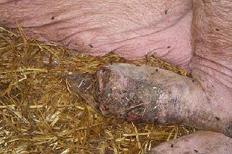 Fig 3:  Typical bush foot with abscess ready to burst above the claws.

In the early stages, there will be little other signs than a reluctance of the sow to put weight on the foot.  She will act as if she is touching something hot.  Over a few days, swelling may appear above the horn and the foot will be noticeably hot and painful.  Unless action is taken, the developing abscess will infiltrate all tissues of the foot, including tendons and bone, setting up a septic arthritis or osteomylitis and tendonitis.  Ultimately, the pressure above the hoof will be so great that the skin will die off (necrosis) and the abscess will burst with pus and blood leaking out (figs 3 & 4).  The animal is likely to be 100% lame.  Swelling of connective tissue may extend above the foot as far as the hock or elbow. 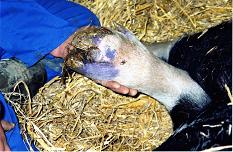 Fig 4:  Typical bush foot with gross swelling and  pus discharging above the claws.

The aim must be to maintain a healthy, correctly shaped foot.  As well as avoiding adverse environmental conditions (such as permanent wet, sharp edges, abrasive concrete) there is a need to maintain adequate nutrition. The smaller producer may be hampered in the choice of diets, choosing to use a single diet - often for all ages of pigs, let alone for sows at different stages of their reproductive life.

Whilst detailed nutritional provision is the domain of the pig nutritionalist, in general the principles should be to maintain pregnant and non-productive adult pigs on a low protein based ration (c 14% CP) with this rising during lactation to 18-19% CP.  However, the smallholder must be aware of the potential for uneven intake where grazing is available (particularly clover rich pasture) or where non-meat based scraps are used, and protein intake can vary.

Where feet become overgrown paring and filing can be valuable and "rollover" crates - a small version of a rotating cattle crush - can be useful.  Alternatively, sedation may allow access to the feet for paring, with or without rope restraint.

Foot dips are used for cattle involving formalin, copper sulphate or even water soluble antibiotics and have been used in pigs but have the disadvantage of tending to harden the horn (so it becomes brittle) and the fact that pigs try to drink it! In the case of formalin this would prove fatal. If a small number of sows are involved and supervision can be given, copper sulphate foot baths used once per week can be useful in problem herds. (Care is required regarding disposal of material to avoid environmental contamination)

Successful treatment of the individual with infected claws depends on early recognition and aggressive antibiotic medication before deep-seated abcessation has occurred.  Unlike the cow, which is equally prone to this type of lesion, the pus tends to become dry and is difficult to drain out of the foot, even with excessive debridement.  It is important that the antibiotic treatment chosen not only is effective against the organisms involved but also has good penetration into the foot, particularly the bone and surrounding tissues and is given in sufficient dosage early enough and for long enough.  Your veterinary surgeon will advise but Lincomycin is one of the more favoured treatments due to good tissue penetration; it must, however, be administered for sufficient time to achieve success.  A minimum of five days treatment is standard.  Concomitant treatment with analgesics (non-steroidal anti-inflammatory drugs) is also indicated to improve comfort and welfare.  Help to stand and gain access to food and water is vital.  A sow so affected must be removed from the healthy competitive group and placed in an isolated hospital area on a clean dry bed, preferably straw based.

Where deep-seated sepsis has established, aggressive surgical debridement and flushing may be indicated.  In extreme cases, provided only one claw is affected, amputation of the lesion under general or regional anaesthetic by a veterinary surgeon can be considered although in the authors experience sows are even less tolerant of this procedure than cows and recovery rates are poor. The welfare insult to the pig coupled with loss of productivity render it a dubious option and humane euthanasia on farm may be the best approach.

Foot lameness is common in the adult pig and usually arises as a result of a defect in the hoof - the result of abnormal growth and adverse environmental conditions.  Attention to husbandry and regular paring of abnormal shaped feet, coupled with sound nutrition will go a long way to minimising defects.  Where secondary infection occurs, early aggressive treatment is essential if resolution is to be achieved.