Sarcoptic mange is a parasitic disease of pigs characterised by intense skin irritation and damage.

The disease is economically important due to lost productivity as well as having welfare implications for the animals.

Many herds are mange free and good biosecurity will maintain that status. Scotland is reported to be close to totally eradicating Sarcoptic mange from the commercial pig sector 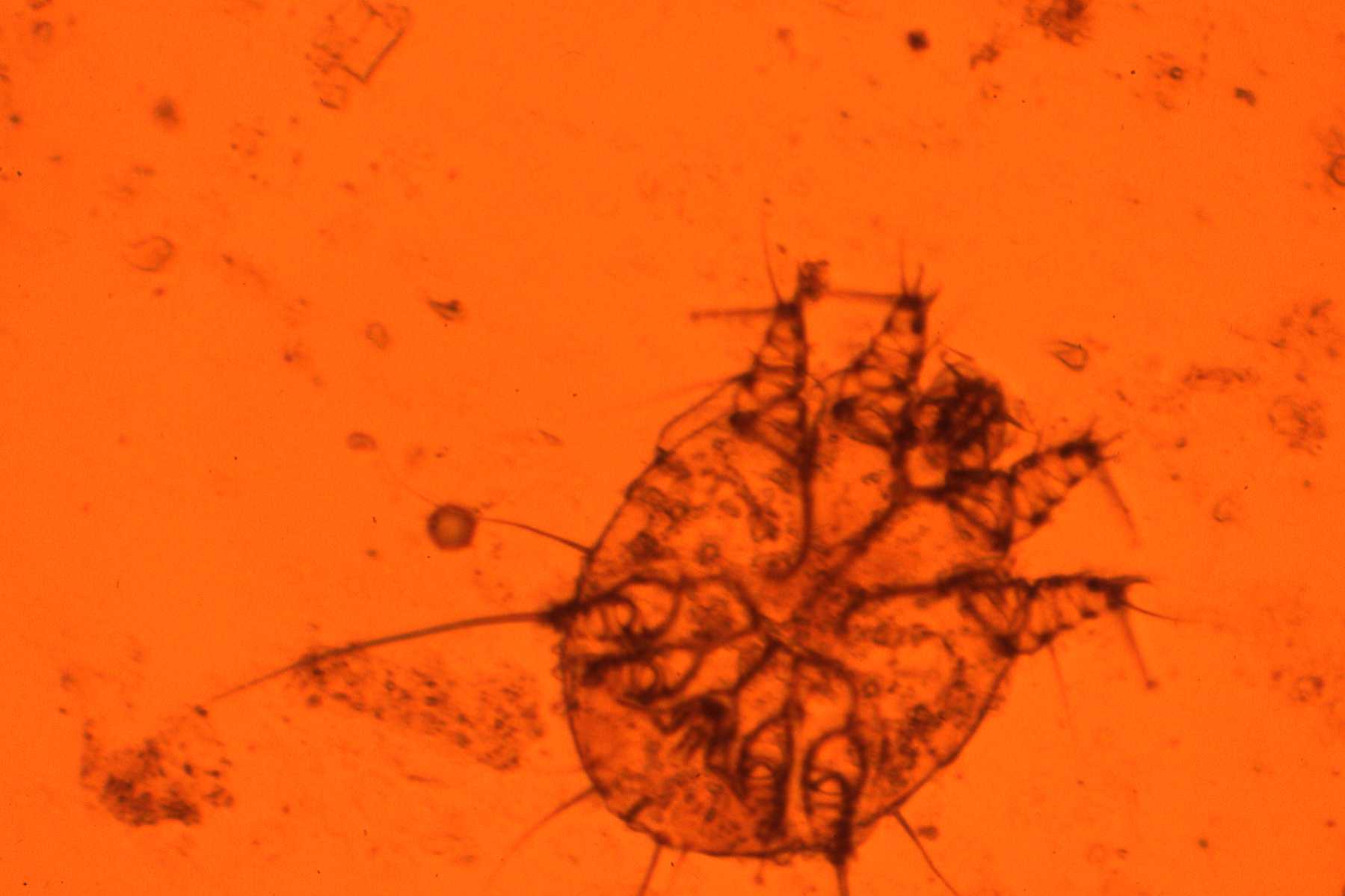 Fig 1: Sarcoptes scabeii var suis - the cause of sarcoptic mange in pigs 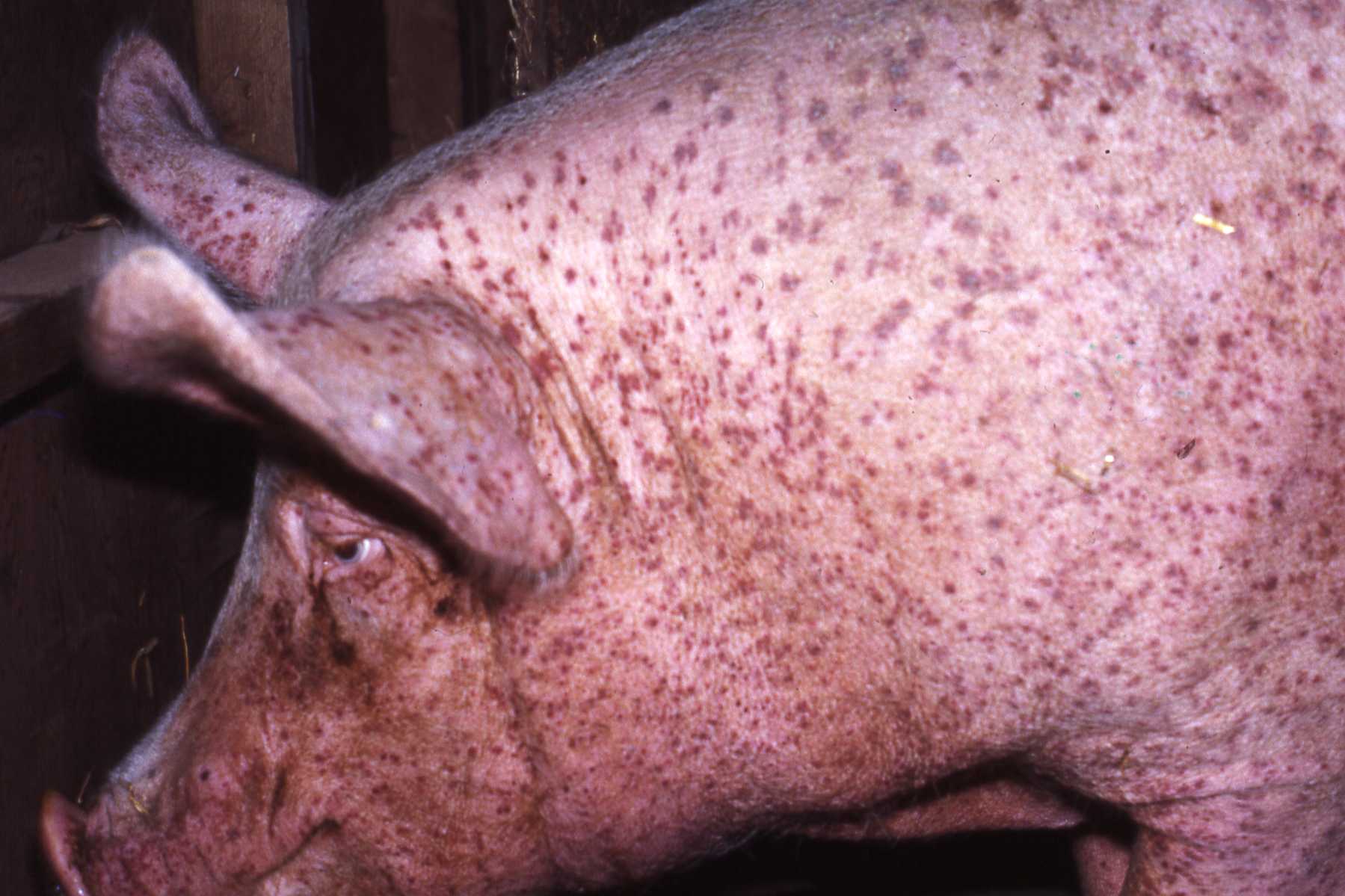 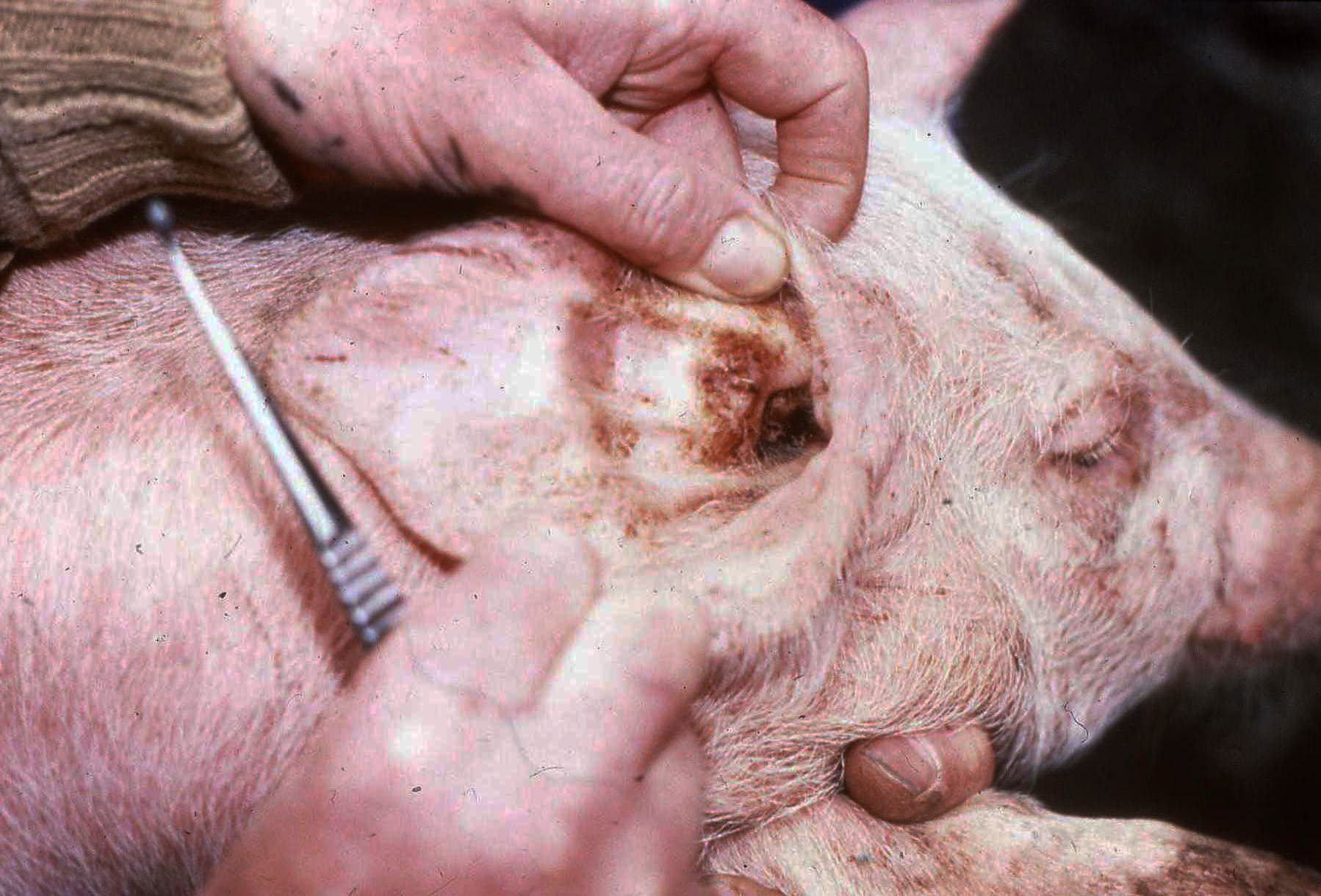 Fig 3: Active infection in the ear of a pig 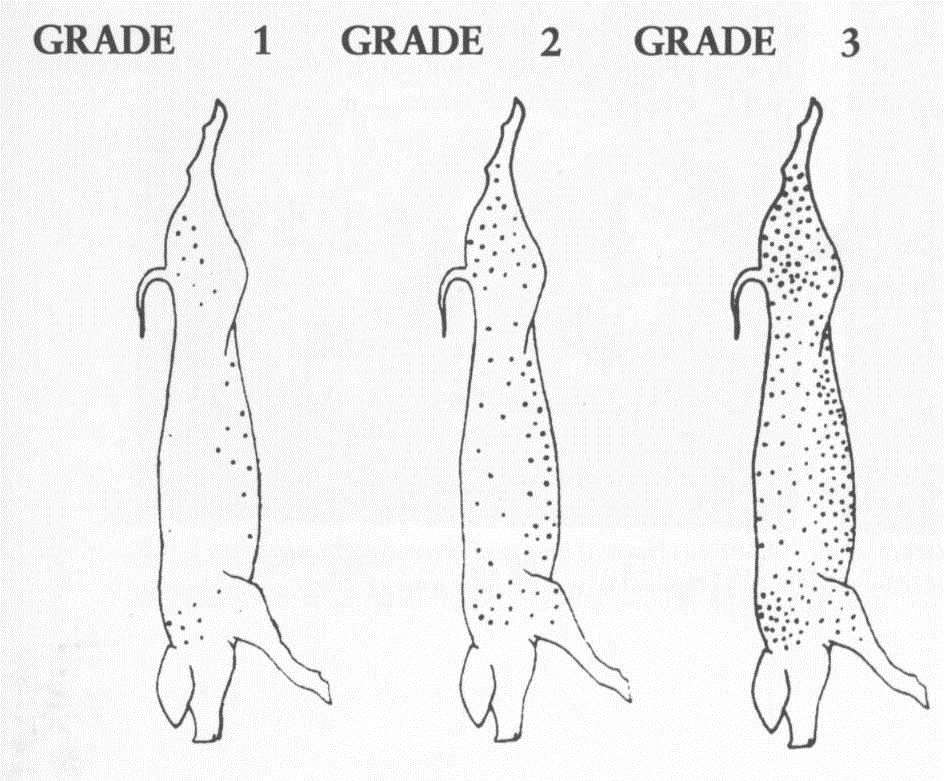 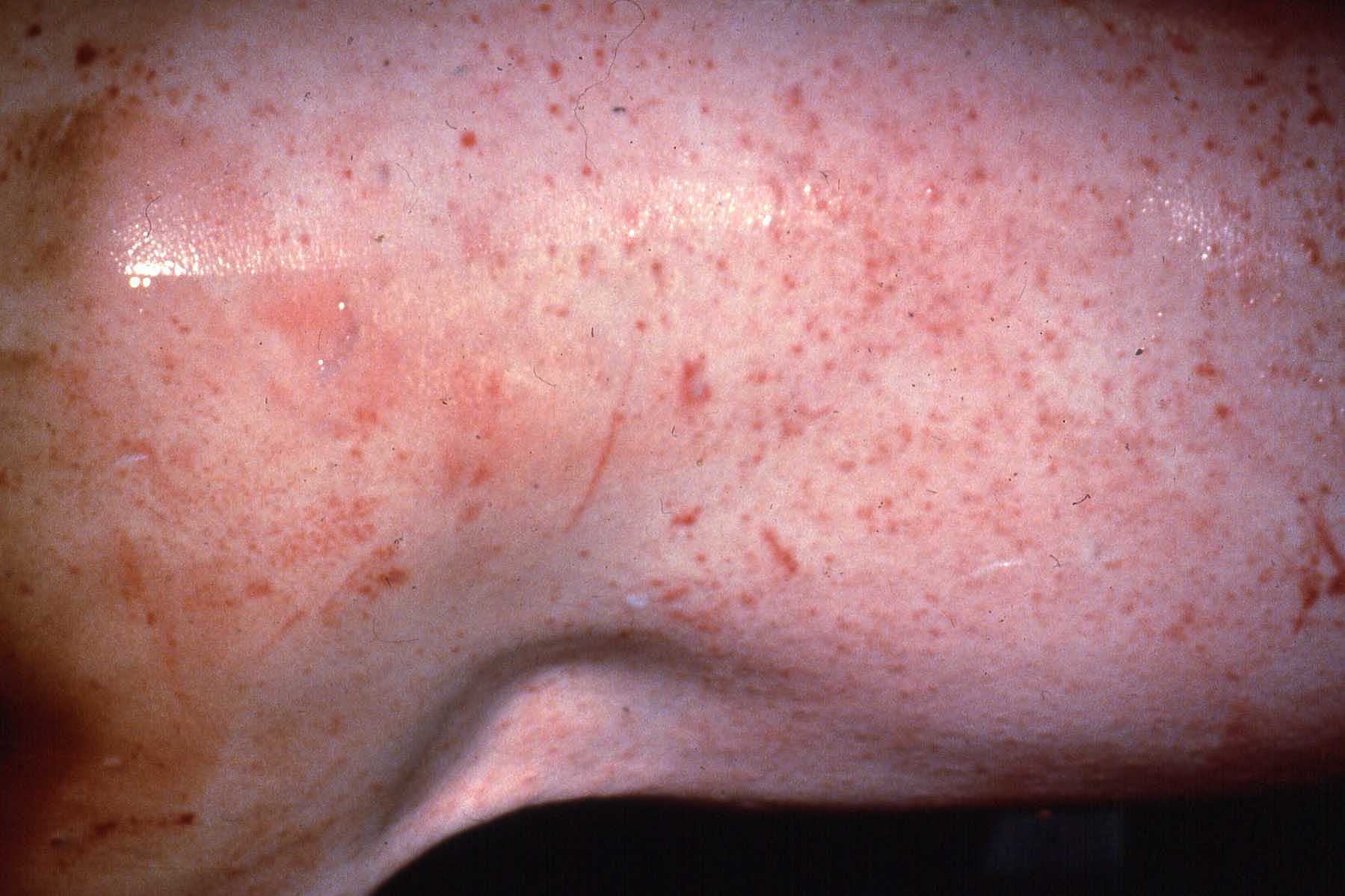 Fig 5: Hypersensitive reaction to mange mites in a growing pig 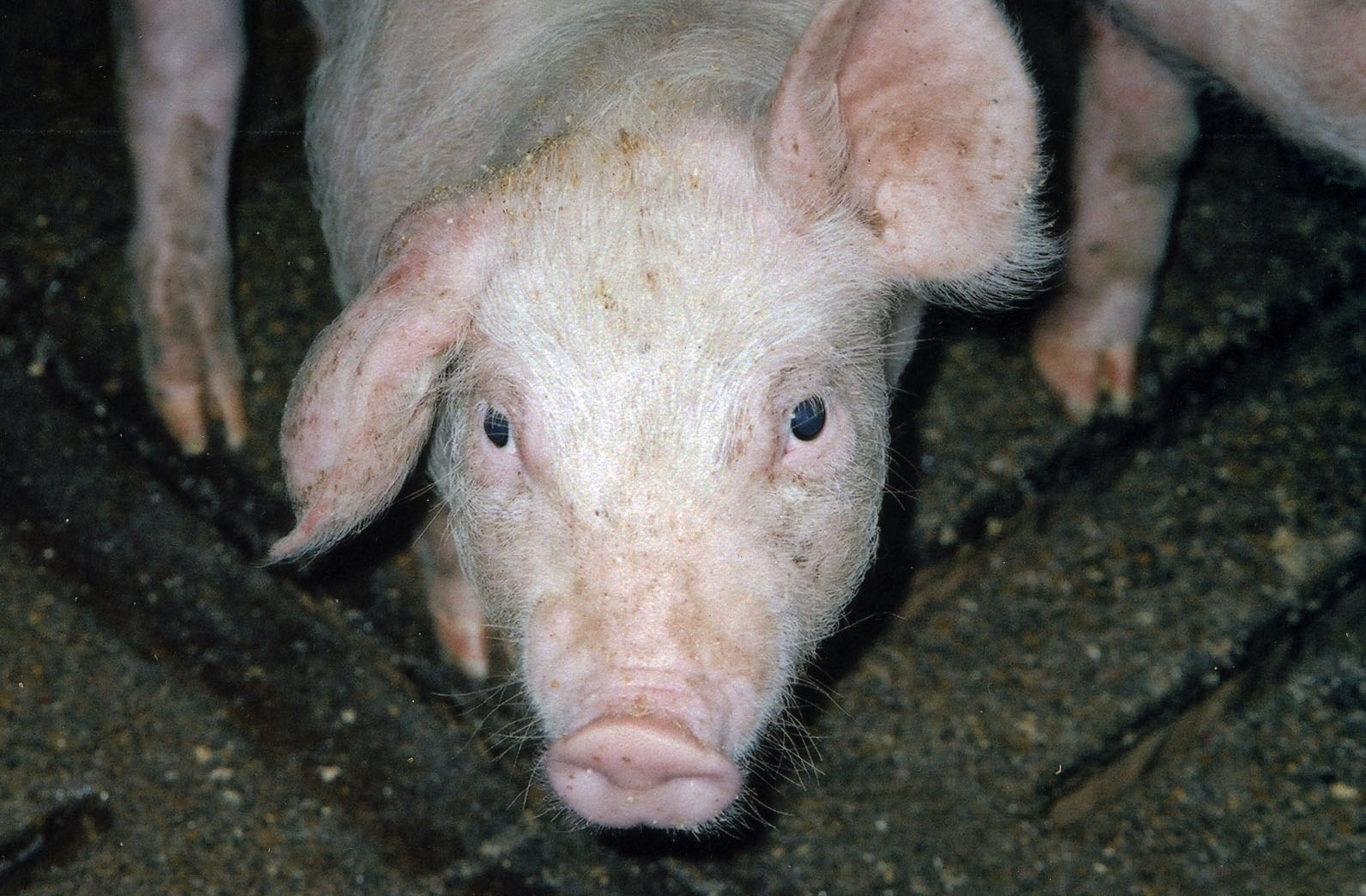 Sarcoptes scabei var suis, an insect parasite, is a host specific mite that is spread from pig to pig by direct contact or by vectors.  It can persist in the environment for up to three weeks in ideal conditions and disease can then result from pig contact with a contaminated environment including transport.  The mite can occasionally affect stockpeople, although they are "dead end" hosts, i.e. they cannot spread the disease.

The mite burrows into the skin and lays eggs in tunnels within the skin. This causes severe irritation with the pig rubbing its body on any available surface continually.  The ears are a particularly favoured site of infestation leading to head shaking and secondary ear damage (haematomas) - (Fig 6).  Middle ear damage can also result.  The disease can thus often be detected audibly as much as visually.

The skin may be reddened and the ears waxy, although secondary skin damage (cuts and abrasions) and infection (Greasy Pig Disease) are common.  GPD alone is non-irritating and can thus be differentiated from mange. This form of the disease is mostly seen in young growing pigs of 8-12 weeks of age.  As the disease progresses in the individual, chronic lesions will occur.  Thick encrustations in the ears, behind the elbows and on the anterior surface of the back legs are the most common signs with the whole skin generally discoloured and scurfy.  Irritation is still evident.  In untreated growing pigs so affected, the skin can become thickened to such an extent that it requires removal (and subsequent downgrading) at slaughter.

The allergic form of mange is seen in older pigs and adults and probably represents re-infestation of a sensitive individual.  Huge numbers of small round red pimples occur over the whole body and take several weeks to disappear following treatment.  This form of the disease forms the basis for the 1-3 scoring system for papular dermatitis used as part of the disease monitoring process within the British Pig Health Scheme. (BPHS)(Fig 4). Because of the irritation, damage from aggression may be a feature of mange and may include tail and ear biting, vulval biting and savaging of piglets.  In addition, growth rates will decline by up to 15% and feed usage in heavily infested sows will be increased by 10% or more.

Chronically infected boars may fail to work due to the discomfort causing infertility that may be noticed as the first sign of problems on the farm.  Lesions can be severe inside the front and back legs. AI boars may refuse to cooperate for the collection of semen.

Chemicals within cigarette smoke have a dramatic effect on a pig with mange with an increase in the levels of irritation that can reach the frantic level.  Such effects are not seen on uninfested pigs.

Animals that are clinically affected with any of the forms of mange described should be treated without delay.  The most effective treatment is injectable Avermectin and in severe chronic cases a double treatment 10-14 days apart is appropriate.

Historically, topical organophosphates were used but these are no longer available.  Similarly, topical amitraz is no longer licensed for use in pigs.

Most reputable breeding companies in the UK only sell seedstock that are free of Sarcoptic Mange.  Provided a herd is set up free of the disease, is vigilant over its source of replacements and operates to reasonable standard of biosecurity, there should be no reason to acquire the disease.

Where mange is endemic in a herd, a vigorous and persistent programme of control is needed.  This should be split into breeding and feeding herds.

Alternatively, sows can be treated 2-3 weeks prior to farrowing.  Provided they then enter a thoroughly clean farrowing pen, they will remain free of infection and not be a source for the piglets, but are likely to become reinfested when moved back to service or dry sow accommodation.

2.   Feeding herd. Young pigs will pick up the mite from their mother, from contact with older infested pigs or from a contaminated environment.  Provided the disease is controlled in the breeding herd and that 'all in all out' pig flow into clean accommodation is practised, there is often no need to treat growing pigs.  Where these criteria are not followed, in-feed treatment soon after weaning is effective - usually given in the second diet - 1 week after weaning for 7 days.  Treatment in the first week after weaning is difficult due to low feed intake.  Thereafter, pigs must not mix with older animals or enter dirty pens.  Attention is particularly necessary in hospital areas which are frequently permanently occupied, rarely de-populated and cleaned, contain mixed ages of animals and contain compromised animals that are particularly vulnerable to parasites.

Where mange is active, pigs should be treated into and out of hospital pens as a routine - unless going direct to slaughter.

A range of protocols have been developed to eradicate mange from herds involving a combination of medication and hygiene measures.  Each programme must be tailored to the needs of the farm and should be drawn up in consultation with the veterinary advisor.  Prolonged meat withdrawal periods for most of the effective injectable Avermectins make a whole herd eradication programme in a breeder/feeder farm difficult without partial depopulation but can be applied particularly as part of a wider strategy of disease elimination where growing pigs have been removed off site.

Unlike most serious diseases of pigs in UK, mange does not kill and as such it is often overlooked as a limit on productivity.  As well as the welfare implications, the disease itself can be very costly.

Heavily infested breeding herds have been shown in the field to suffer a 10% penalty in farrowing rates.  In a 500 sow breeding unit this can give a shortfall of more than 100 litters or 1100 pigs produced in the year.

In growing pigs, the growth penalty of up to 100gms/day from weaning to slaughter can add 30 days to age at 100 kg, requiring an additional 42kg of feed at a cost per pig of more than £8 per head.

Furthermore if skinning and downgrading at slaughter is needed the penalty can be up to £25 per pig (or considerably more if pigs are marketed under the "organic" label) Some severely affected batches can lead up to 50% of the pigs having to be skinned.

Thus, for a 500-sow breeder/feeder farm with uncontrolled mange, the annual cost of disease can exceed £100,000 rendering it non-sustainable.