Respiratory Disease in the Young Piglet

Traditionally, respiratory disease, particularly pneumonia, has predominantly been a problem of the growing pig above 7-8 weeks of age.

However, over the last 10 years, a syndrome of respiratory disease affecting the very young piglet (10-12 days of age) has become commonplace on many farms.  Whilst the emergence of this syndrome in the UK coincides with the arrival of PRRS and this viral infection can precipitate the disease - particularly in piglets born viraemic PRRS is not necessarily essential for the development of the disease.

Whilst it is normally believed that colostral protection against Haemophilus parasuis in the piglet lasts from 4-5 weeks, experience on farm suggests, in many cases, the MDA is not protective and the piglet is challenged from soon after birth.  The condition is far more prevalent in indoor produced piglets, although it does occur outdoors, usually affecting single litters reflecting possibly the lower challenge levels aimed at litters not exposed to their chort and other sows of variable age.

Due to a disturbing lack of information regarding the nature and serotype of the organism involved, it can only be speculated that some form of change occurred with this bacteria in the early 1990's which altered its behaviour.

The earliest signs seen will be at 10-12 days of age and will present as sneezing and coughing.  Piglets otherwise appear to suckle satisfactorily, although weaning weights can be depressed by up to 1kg.

More significantly at weaning (25-28 days) the stresses involved appear to trigger more serious biological changes with an increase in the severity of the respiratory signs, failure to eat and marked loss of condition from weaning onwards.  The syndrome can be distinguished from the other 2 major causes of respiratory disease in the post weaning period by the age of pigs affected. 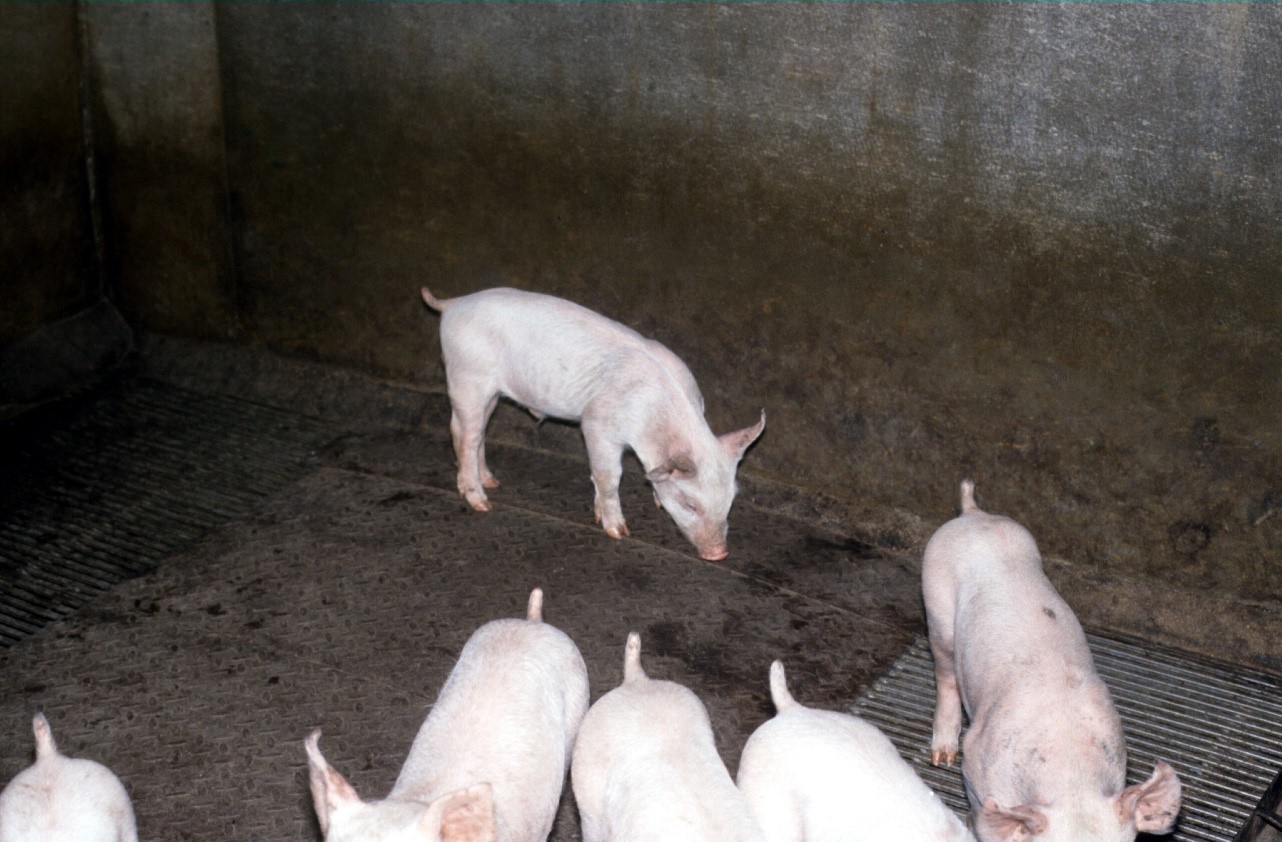 Post mortem examination of acutely affected 14 day old pigs will often reveal very little gross pathology, although histopathology on lung tissue and bacteriology will confirm the cause.  The organism is particularly difficult to grow and fresh material only should be used. Laboratory testing shold not only include histopathology but PCR testing for PRRS and other viruses such as Swine Influenza.

In older pigs (post weaning) typical pleurisy and pericarditis will be evident with increasing severity as age progresses.  Culture of Haemophilus parasuis becomes more and more unsuccessful as pigs progress through the condition. 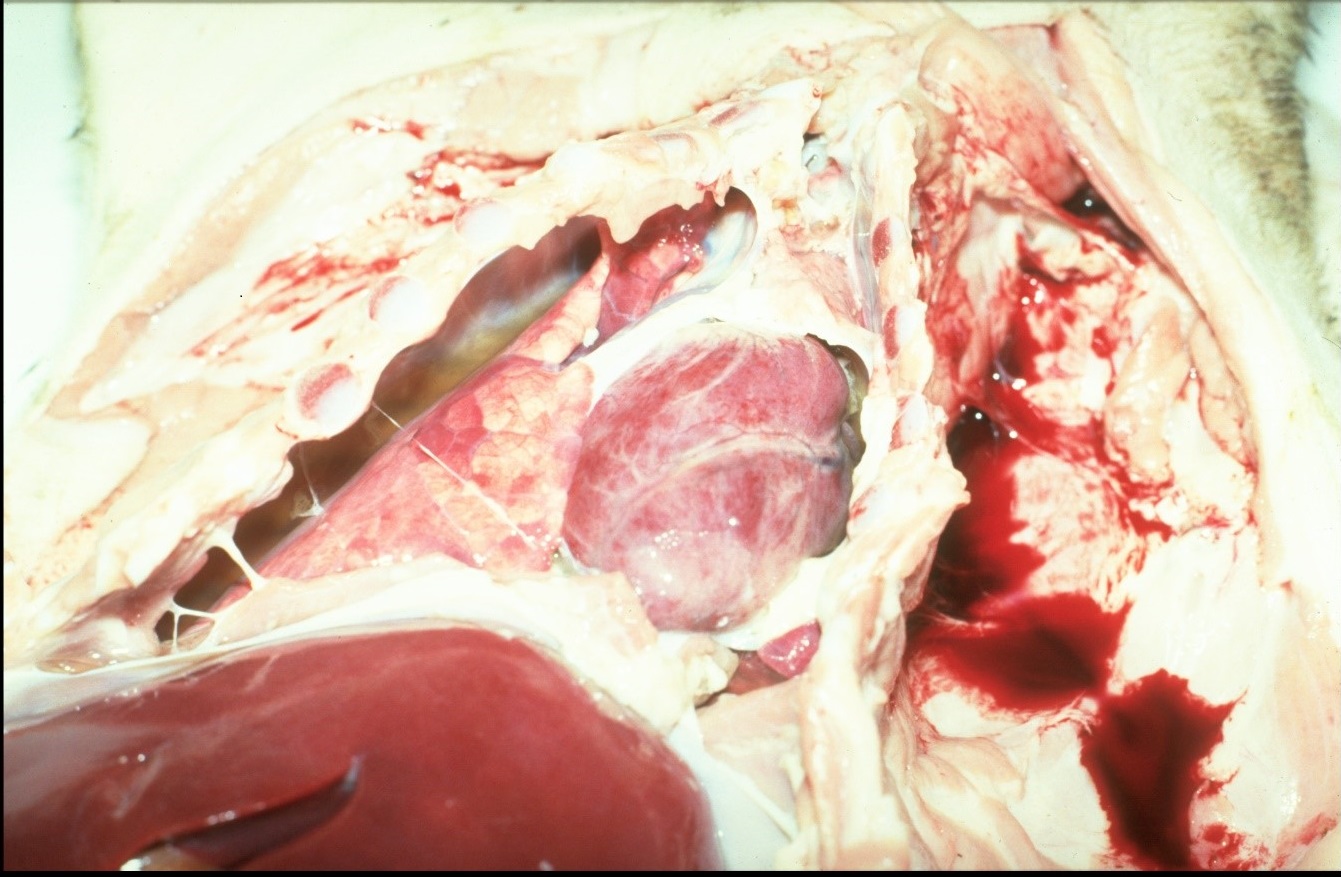 Herds suffering from this syndrome have a tendency to have higher levels of pleurisy and pericarditis recorded at slaughter - 20% and 8% respectively are not unusual. Other lesions may also be present in the lungs at slaughter (pneumonia, abscessation) but these are usually due to complicating subsequent bacterial or Mycoplasma infections 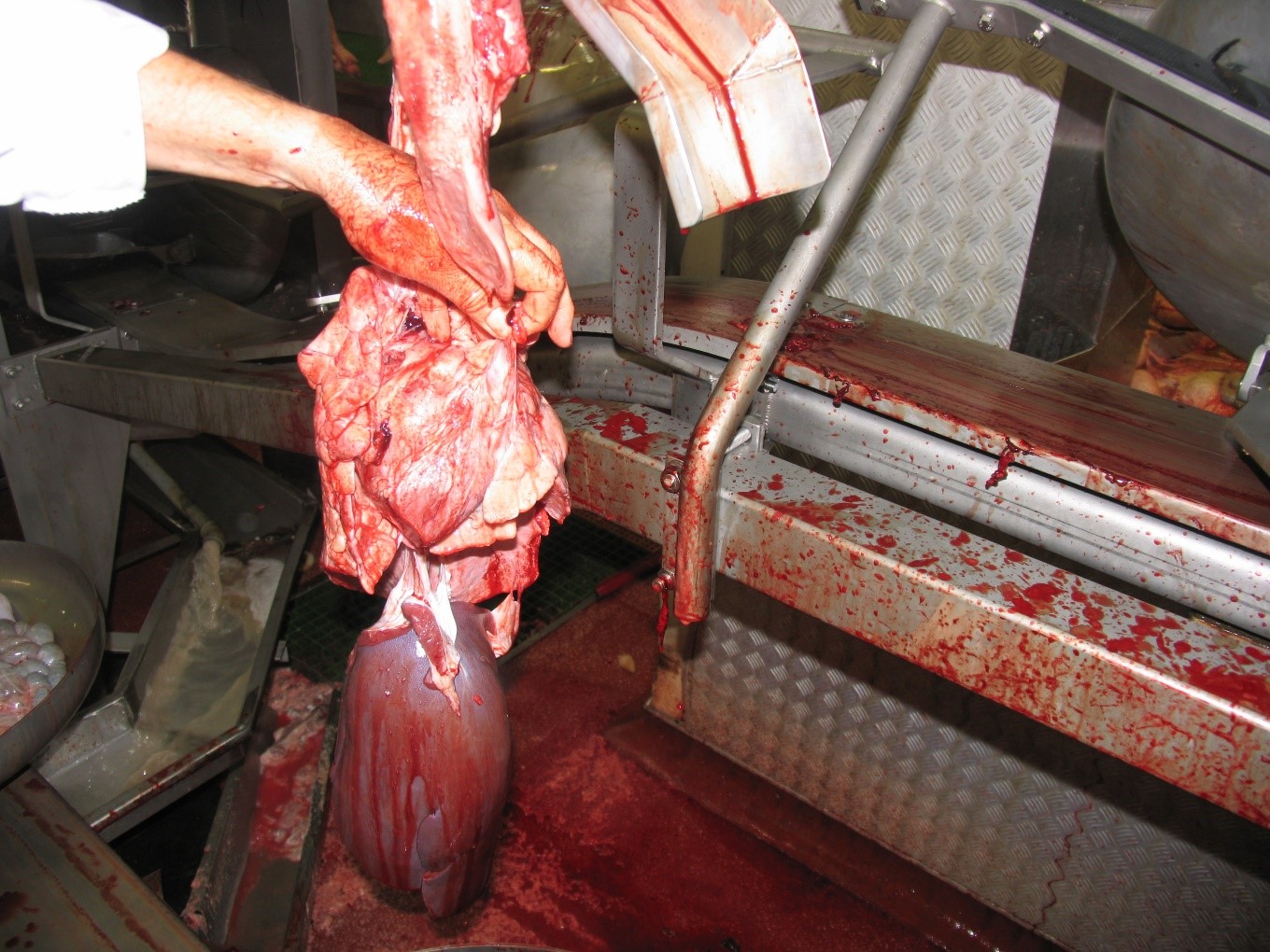 A proportion of the pigs will die and many will be destroyed as runts.  It is possible to nurse affected pigs through to recovery, although they may well be 6 weeks behind target of weight for age at sale.  Some animals will have suffered irreparable pericardial damage, which remains as a constrictive lesion around the heart and pigs may die suddenly at an advanced age, when externally they appear to have recovered.

Affected piglets require early and aggressive treatment if there is to be any chance of recovery.  Treatment on a daily basis by injection with antibiotics - usually penicillin based - may be required for 5 days.  In addition, all efforts must be made to stimulate appetite by offering a wet mash of creep feed made up fresh each morning and evening.  Electrolyte fluids are also beneficial.  Affected animals must be assumed to be a major source of infection and, as such, should not be moved back into contact with healthy animals.  Once weaned, they must never go back into the farrowing area.

Prevention of recycling of disease is vital to control the condition with:-

1) All in all out policies for farrowing and nursery accommodation.

2) Do not move affected pigs back into contact with younger animals.

3) Smaller farrowing rooms with less sows and litters appear to be associated with less serious disease.

4) Group size at weaning can influence severity of the disease with "big pen" systems appearing to suffer more serious and irreparable disease in individuals.

6) H. parasuis is present in most pig populations; there are many different strains of the bacteria and little ability to identify these in a population. Therefore, changing sources of incoming stock has a high risk of introducing new strains which can trigger disease. Avoid changing source of gilts and observe standard isolation/quarantine measures on entry.

Where only H. parasuis is believed to be involved a medication programme can be employed to reduce the colonisation of the nasopharynx of the piglet from prior to the earliest signs of disease.  Use of long acting Amoxycillin at 10-12 days (before symptoms occur) for all pigs is followed up with a second dose at weaning.  Alternative strategies have been employed using, for example, Ceftiofur and are highly effective but would, due to their Critically Important Antibiotic status only be used as a last resort and be be tailored to specific farm needs by the attending veterinary surgeon. Long term medication which can also upset the development of the normal gut flora and fauna (microbiome) in pigs treated at a young age is to be avoided and alternative approaches used.

Vaccination of the piglet is not feasible due to the young age at which disease starts and as such a vaccine programme targeted at the sows prior to farrowing can be considered. Glässers Disease vaccine is available in the UK but due to the vast array of serotypes of the bacteria may not prove effective at controlling the syndrome. In such situations, where H parasuis has been successfully cultured from affected pigs, it is then appropriate to consider using an autogenous vaccine in the sows. Such products are produced from the farm isolate and are only permissible to use in that farm or its directly associated supplier. (eg in a breeding unit supplying a nursery from which the isolate was obtained) They are produced by specialist laboratories under licence and general involve quite a long term commitment to use.

Where other agents are identified additional or alternative interventions can be considered:

With both these viruses use of aspirin in the water at weaning for 5 days has proved particularly beneficial.

If other agents are involved, then the veterinary surgeon will need to tailor the programme accordingly but experience suggests that the other organisms described above tend to act as opportunist invaders of the pig following damage by the two viral infections and H parasuis. Controlling these will render the opportunists of little relevance.