Compared to other farm species, the pig appears to be particularly vulnerable to prolapse of the rectal tissue through the anus, which can be seen in any age group from as early as 1-2 days old up to adults.

The fundamental cause of the prolapse is an increase in abdominal pressure, forcing a breakdown in the weak muscular support mechanism of the pelvis, which normally retains the rectum in place.  There may well be both breed and gender differences in the vulnerability of individuals to prolapse occurring. 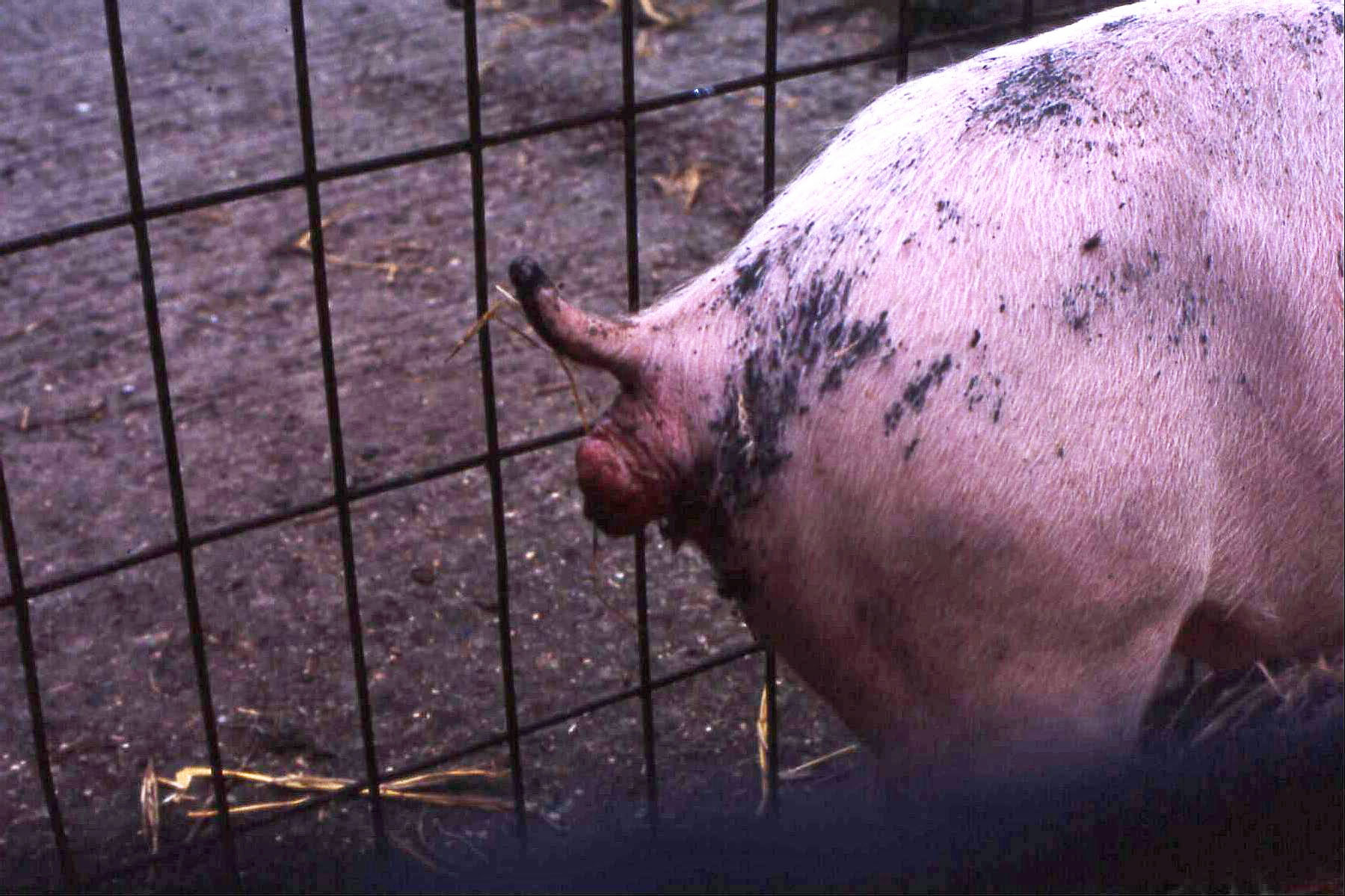 Fig 1: A typical rectal prolapse in a weaner 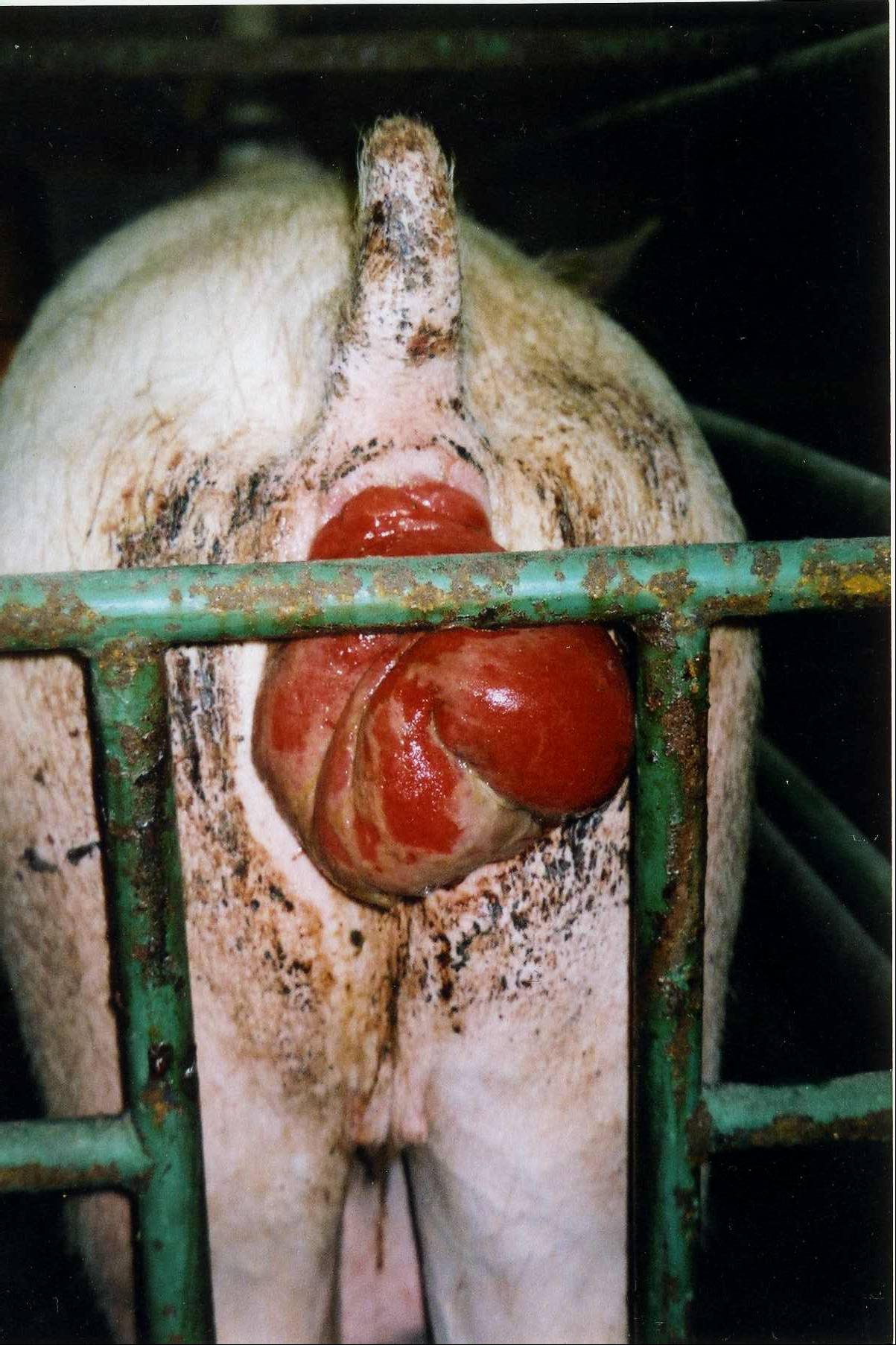 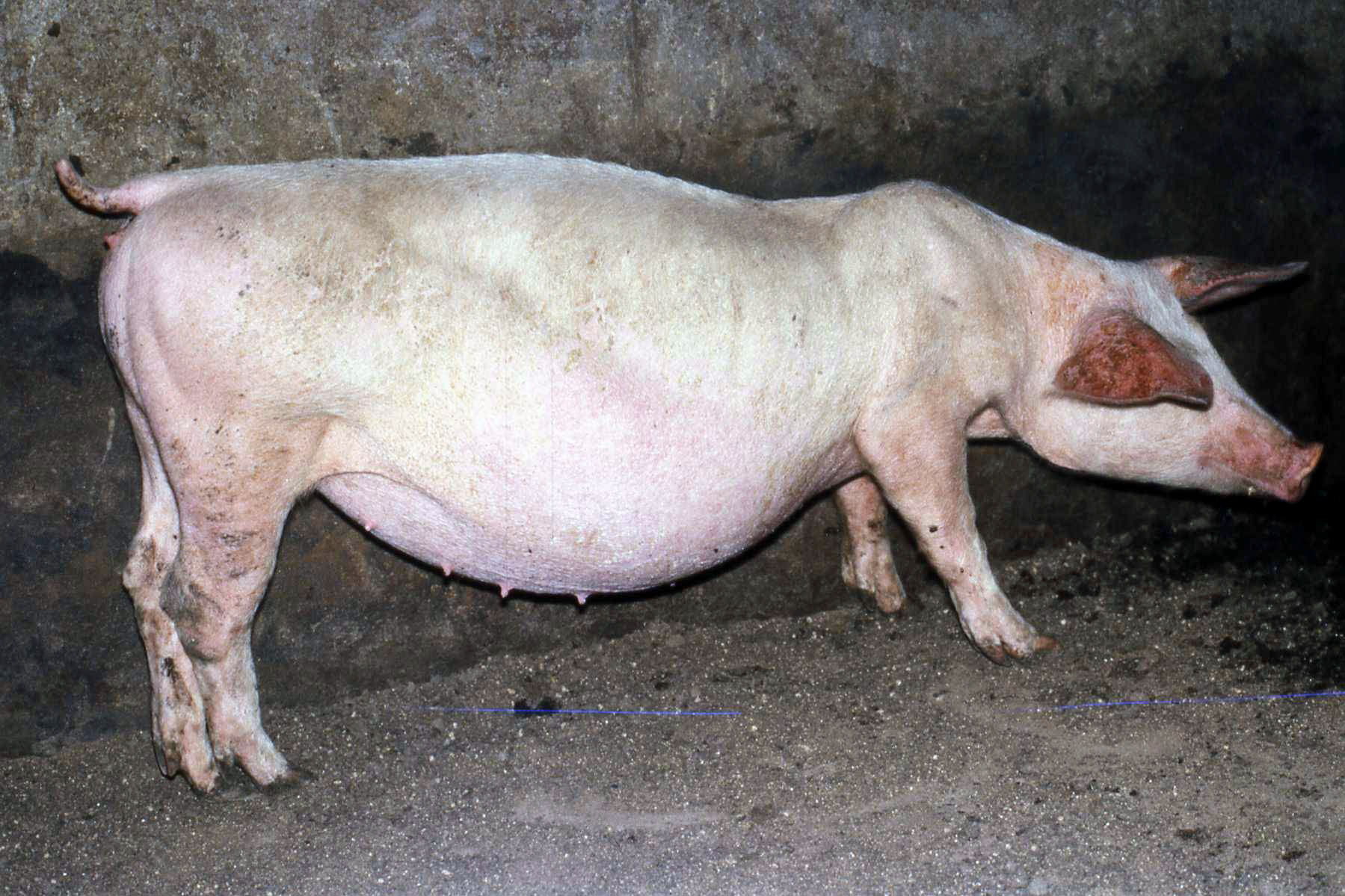 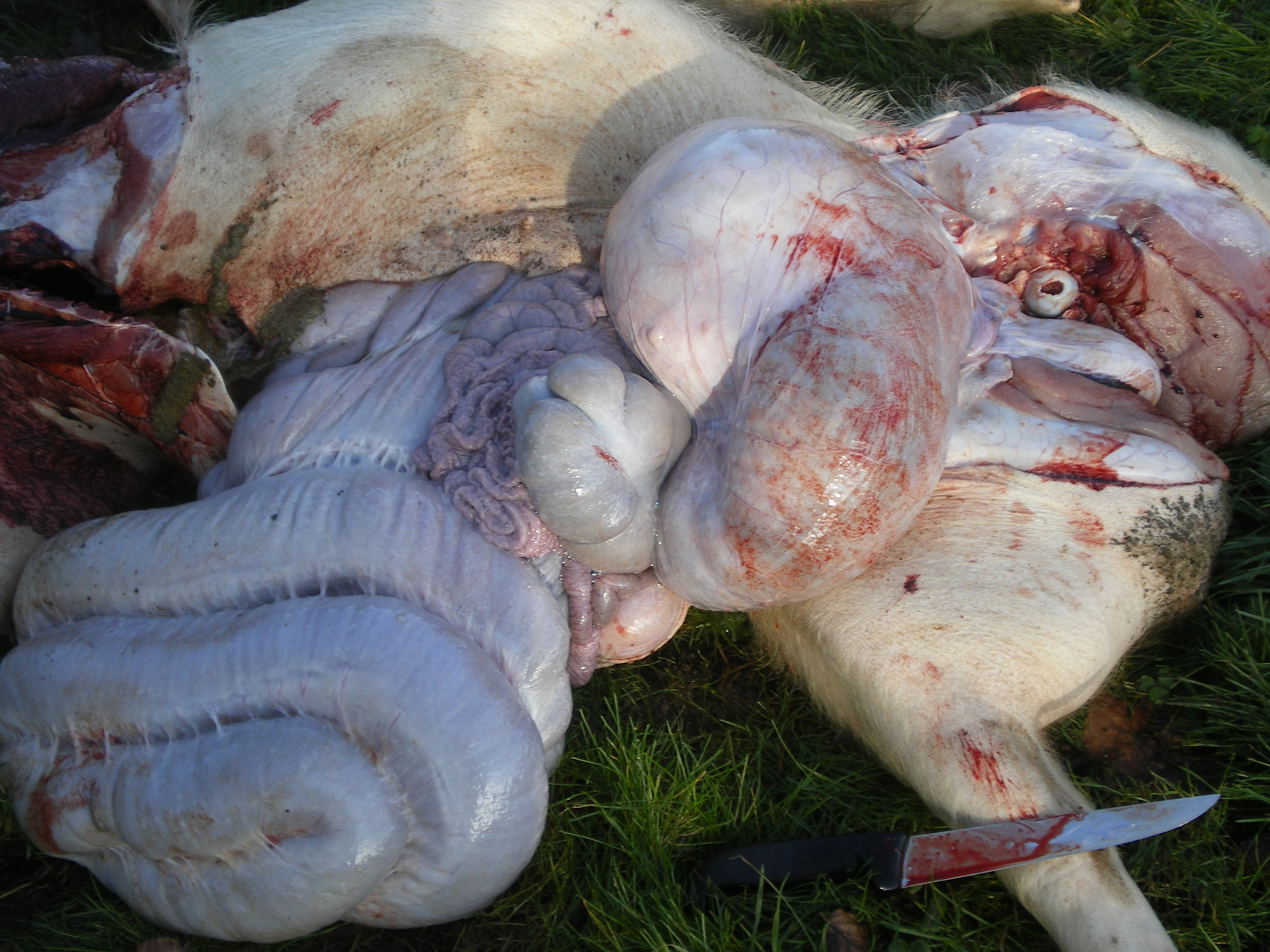 Fig 4: Massive distension of the large intestine in association with stricture 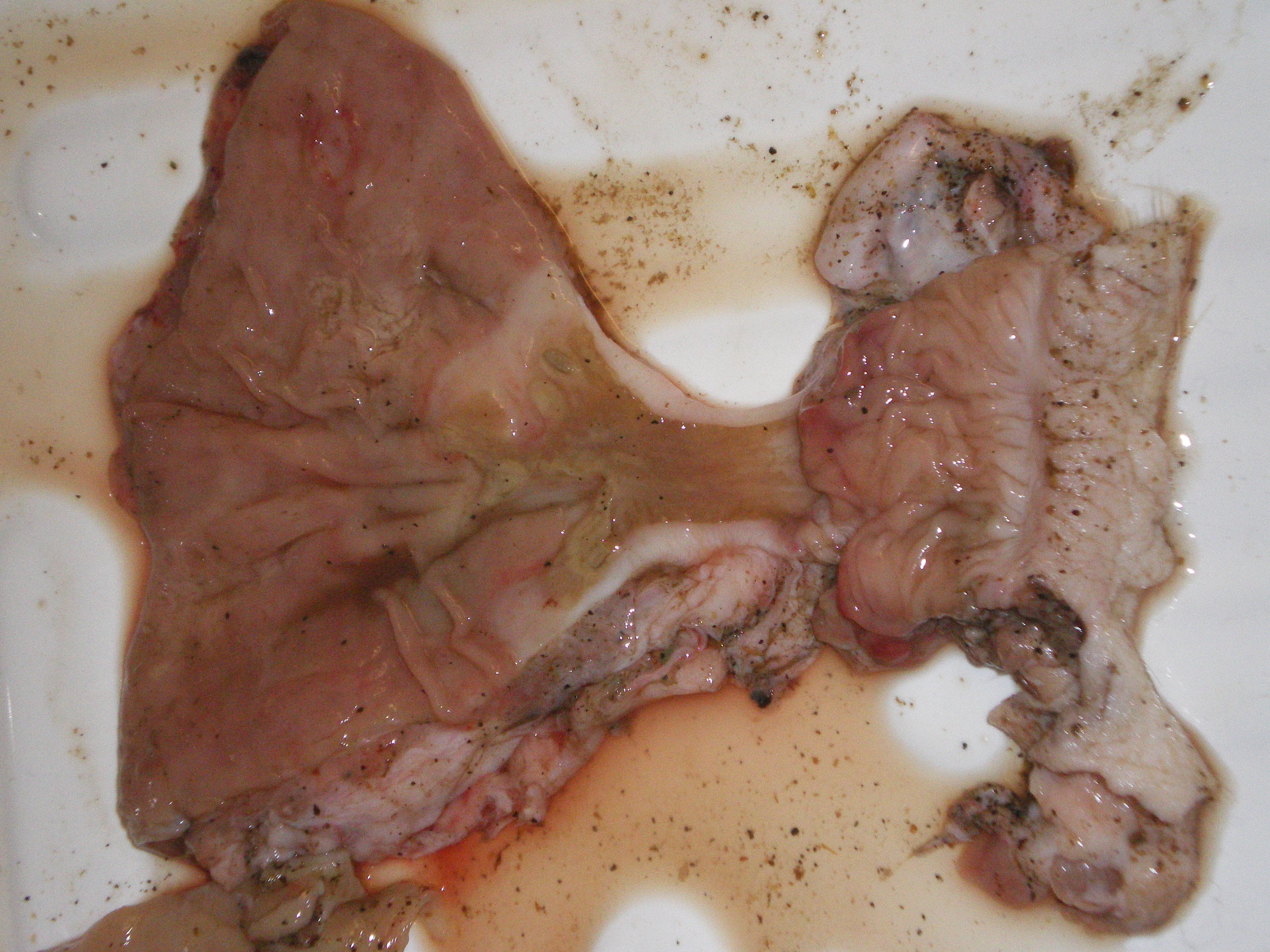 Fig 5: Scar tissue forming a stricture can extend well into the large intestine

The following list provides an outline of the most common causes of prolapse, as seen in commercial pig farms:-

2) Constipation most likely to be seen in the adult close to farrowing associated with physiological changes, the removal of high fibre feedstuffs such as straw bedding or incorrect feed levels.

3) Parturition - as a result of excessive straining.

4) Water shortage - leading to reduce water content of the faeces and increase straining to pass.

5) Medicines.  Certain antibiotics (Tylosin, Lincocin) have been associated with oedema (swelling) of the lining of the rectum and subsequent prolapse.  This is most likely seen with high doses.

6) Toxins.  Some mycotoxins from feed or straw can be associated with rectal swelling and straining.

7) Rectal damage e.g. as a result of boars riding each other.

8) Coughing.  The process of coughing causes an increase in abdominal pressure and, in some cases, this may be sufficient to push out the rectum.  Many animals will expel faeces as they cough and the rectal lining will penetrate through the anus.  In extreme cases, it does not return and remains prolapsed.

9) Fast growth.  Prolapsing can often be a problem in fast growing pigs, particularly from 30-60kg on very high-density diets.

10) Variable temperatures.  Pigs have a poor ability to control their body temperature and tend to be adversely affected by variation in the ambient temperature and prone to chilling.  The consequence is huddling and piling on top of one another.  If a pig then coughs while another is lying on top of it, the abdominal pressure will be even higher than normal and the only place that the pressure can be relieved is at the anus.

Once a prolapse has occurred, a number of events may follow:-

1) It rapidly returns into the anus.

2) It remains outside the anus and, due to the constrictive effect on blood and fluid drainage, it generally swells up.  It is thus easily damaged by trauma on pen divisions, feeders etc.

3) It is eaten by other pigs in the pen.  It is not uncommon to find blood in a pen and around the mouths of pigs but with no obvious prolapse in any other animals i.e. the prolapse will have been completely chewed off.

Long term consequences may be:-

a) No effect - particularly if the prolapse returns without damage.

b) Slow dying off of the prolapsed material over several weeks with the chances of secondary infection arising from rotting tissue.

c) Rectal stricture.  The prolapse resolves but the scar tissue left forms a ring of slowly constricting tissue that eventually blocks the rectum leading to a "blown up" pig (Fig 3).  Such animals require euthanasia.

Rectal stricture is a common condition in growing pigs in which scar tissue forms a ring inside the terminal rectum which slowly closes, obstructing the bowel and preventing defecation.

The result is that faecal material accumulates in the colon, caecum and rectum (large intestine) leading to distension of the abdomen (fig 3).  Body condition is lost and the pig ultimately becomes gaunt and hairy.  Occasionally the skin may take on a yellow tint as bile, which would normally be excreted, is reabsorbed.  Death is a natural end point but humane destruction will be required before this.  Affected pigs are not suitable for slaughter for human consumption.

At post mortem examination the large intestine will be hugely distended and inflamed (fig 4) and dissection of the rectum from within the pelvis will reveal a ring or band of scar tissue - sometimes extending well up into the colon - obstructing the gut (fig 5).  Frequently, micro-abscesses will be present around the rectum.

If the stricture starts adjacent to the anus it is reasonable to assume that a prolapse previously bitten off by another pig was the start point of the stricture.  However, in many cases there is a section of normal mucosa between the anus and the stricture, suggesting that a prolapse had not been the root cause.  This area of the rectum has a poor blood supply and the primary damage leading to scaring may be due to either trauma (e.g. penile penetration) or inflammation/infection either locally in the rectum or via the blood supply. Systemic infection with Salmonella sp, Haemophilus parasuis and Strep suis have been implicated.

Where strictures occur not associated with prolapses, it is essential to establish the primary cause and address that to prevent further causes.

If strictures can be detected early, before the rectum is completely blocked, it may be possible to gently stretch the stricture by digital manipulation to allow the pig to continue to defecate.  Great care is needed not to rupture the rectum.

On some farms, losses resulting from rectal strictures can account for one percentage point of production (i.e. 5-10% of all deaths in the feeding herd).

Any animal noticed with a prolapsed rectum should be isolated away from other pigs.  If it is of slaughter weight, it can immediately be despatched for slaughter with a food chain information declaration.  It should be transported in isolation.

If swollen but undamaged, it may be possible to replace the prolapse by sprinkling sugar or salt on it, leaving it 30 minutes and then gently pushing it back in.  The osmotic effects of the salt/sugar draws out the fluid and shrinks the prolapse.  Force should not be used as it is likely to rupture or split the tissues

It may be necessary to place a purse string suture around the anus to retain the rectum once replaced although this may be counterproductive as it can stimulate more straining.

In a large animal (sow), a rubber washing up glove placed over an undamaged prolapse may exert enough pressure to shrink the tissue and return it inside the rectum.

Where a prolapse is damaged and clearly not in a state to replace, it must be amputated.  The easiest way to achieve this is to insert a pipe (1" diameter for a growing pig, 1 ½" for sows) into the prolapse and tie a ligature around the prolapse baring down onto the pipe.  It is necessary to tie the pipe in with the loose ends of the ligature.  This will cut the blood supply to the prolapsed material and allow it to dry up and drop off, usually in less than 7 days, although it may be necessary to re-tie the ligature after 3-4 days as the tissue shrinks.  If corrugated pipe is available (e.g. electrical conduit), heavy-duty rubber bands or even lamb elastrator rings can be used as a ligature.

In all cases, antibiotic cover should be provided.

Where damage is so great that intestinal tissue prolapses through the open wound immediate humane slaughter is required.  Similarly where a rectal stricture has resulted, the animal will lose body condition whilst the abdomen continues to swell and reabsorbtion of bile in the gut produces clinical jaundice.  Such animals are practically untreatable and unmarketable and must be humanely destroyed.

Clearly, prevention of rectal prolapses rests in being able to identify and correct the cause of the problem.

It is extremely difficult to quantify the financial losses associated with rectal prolapse as in most cases it is underlying disease which precipitates the prolapse and it is the cost of the disease itself, which is most important.

However, where there is no underlying disease a prolapse in growing pigs is the result of high growth rates it is possible to give examples.  A farm typically affected can lose 2% of all growing pigs as a result of prolapse/stricture at an average cost of say £80/head (including lost profit opportunity).  Therefore for a 500-sow breeder feeder farm over a year this could add up to a loss of 230 growing pigs worth £18,400/year.  This cost would then have to be offset by the cost of slowing growth to prevent prolapse.  For example if 50gm/day daily live weight gain was sacrificed between 30 and 100kg this would add 6 days to reach slaughter weight; with additional feed and facility costs this would incur a cost of at least £1.50-2.00/pig.  On the model 500 sow breeder feeder farm this would add costs of approximately £20,000/yr. (If space does not permit retention for this extra 6 days then up to 3kg would be lost from the carcass weight and the losses would triple).  Of course, the absolute financial cost of incurring/preventing rectal prolapse would have to be viewed in the light of the welfare cost to the animals affected