Rhinitis was one of the major disease of pigs through the 1970's and 80's causing major economic loss.

It was disseminated throughout the pig industry principally by the movement of infected pigs, there being very limited arial spread. Since the causative bacterial organism - toxigenic Pasteurella multocida type D (with occasional cases due to type A) - was identified in the early 1980's, an effective vaccine has been produced, which has dramatically reduced the incidence and severity of the condition.  This vaccine replaced several Bordetella vaccines that had been used ineffectively in the 1980's in the mistaken belief that this was the causative organism. However, new outbreaks do still occur, and breakdowns are also seen where vaccination programmes are allowed to slip or where other major disease occur (e.g. PRRS) that undermine a control programme. However, many herds were cleansed of the disease by depopulation/vaccination/medication and are now PAR free.

Atrophic Rhinitis is a disease of the upper airways, particularly the nasal chambers - the principle signs of which are sneezing and nasal discharge in the young piglet of 3-8 weeks of age.  Challenge of older pigs is unlikely to allow the disease to establish. As the damage to the nose increases with age, nosebleeds may occur and the snout will become distorted and wrinkled, either upwards or sideways.  There will frequently be tear staining on either side of the snout.  Growth will be significantly slowed and efficiency of growth impaired.  Affected pigs can take 4-6 weeks longer to reach slaughter and herd food conversion ratios can degenerate by 0.5 or more adding huge cost to production.

Animals that are mildly affected will not show a distorted snout but the filter mechanism of the nose will be damaged (see figures 3 and 4) making the pig far more vulnerable to inhaling dust and infectious particles, which will set up bronchitis and pneumonia.

Whilst death as a direct result of Atrophic Rhinitis is rare, losses do occur as a result of secondary respiratory disease and euthanasia of chronically affected animals.

Breeding gilts that have been reared in a system where Atrophic Rhinitis is present may be slow to come on heat, presumed to be due to damage to nasal olfactory receptors that fail to detect boar stimulating pheromones.

The diagnosis of Atrophic Rhinitis is made primarily on clinical signs supported by examination and scoring of snouts in pigs at slaughter.  Nasal swabs can be taken, using a specialist technique, and tested in the laboratory for evidence of the specific causative bacteria - toxigenic Pasturella multocida, PAR is generally believed to be the only disease manifestation caused by primary Pasturella species infection - generally Pasturella are a secondary opportunist pathogen in the lungs in association with Mycoplasmosis and/or viral infection. 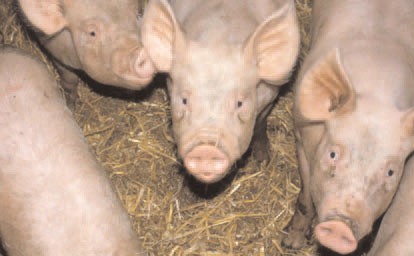 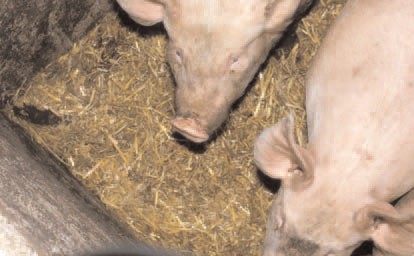 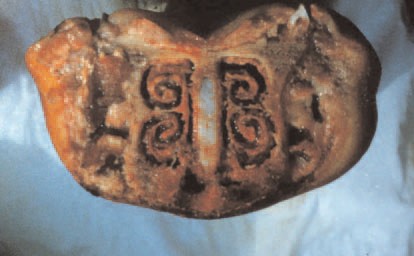 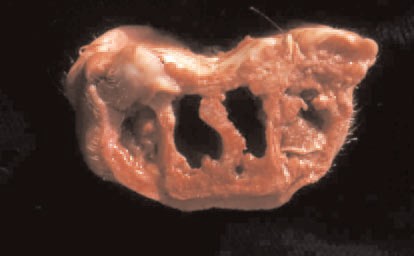 Fig. 4: Total destruction of the turbinate bones - the  filter mechanism in the nose.

Treatment of pigs already showing signs of snout distortion can only hope to reduce the impact of secondary infection - the damage having already been done to the snout.  Antibiotics in feed or water can suppress secondary infection and individual injection of pigs severely affected may be appropriate as appetite is likely to be depressed. However due to the severe effects of the disease on productivity (and pig wellbeing) PAR is not a disease that the modern pig herd can live with unchecked.

When faced with an outbreak of the disease, a treatment programme for baby pigs is appropriate, usually involving individual injection of piglets at 7-10 days, 14-20 days and at weaning, using an antibiotic known to be effective.  Potentiated sulphonamides or tetracycline can be effective. In general, the critically important classes of antibiotics (fluoroquinolones, 3rd/4th generation cephalosporins, amoxicillin/clavulanic acid) should be avoided.

Use of in feed antibiotics at high levels post weaning for 4 weeks should also be used; the whole programme aimed at reducing the risk of infection becoming established in the young vulnerable pig.  Medication of farrowing sows via the feed or top dressing may also be appropriate to reduce the overall bacterial challenge to the piglets.

A vaccination regime using the commercially available vaccine in gilts and sows should be introduced and maintained, aimed at:-

b)      Protecting piglets via colostrum

The vaccine should not be used unless the infection is known to be present and form a challenge. Typical vaccination regime involves a primary 2 dose course either preservice in the gilt or in late pregnancy, followed by single doses as boosters prior to each subsequent farrowing.

Because Atrophic Rhinitis is caused by a specific bacterial agent that either is or is not present in a population, it should be possible to maintain a herd free of disease by attending to strict security procedures. Most reputable breeding companies only maintain populations monitored to be free of Atrophic Rhinitis, although to minimise the risk of introducing disease incoming stock should be isolated for a period of 4-6 weeks on arrival.

The most common other ways of introducing the disease are:

1.  Contamination from cull sows on a collection wagon coming too close to your farm. Likewise, part loads of slaughter pigs.

2.  Fellmonger wagons entering  the  confines of a unit and leaving infection behind.

3.  Contamination of boots and overalls between farms.

Basic but strict biosecurity measures will keep Atrophic Rhinitis out.