Weaning is well recognised as a stressful time for young pigs and one of the most common problems encountered is enteric disease leading to diarrhoea (scour), loss of condition and even death.

The physiological changes that occur around weaning occur whatever the weaning age although to some extent are reduced in the older the pig.  In the "natural" situation where the pigs wean themselves at 8-10 weeks these changes can be mild but in all other situations the risks are high.

This paper will look at the problems encountered in the 2-4 weeks following weaning.

Why is weaning a problem?

The gut of the piglet becomes colonised with a range of bacteria from birth and in the healthy piglet the established flora is maintained in balance by acquired immunity (from colostrum), ongoing protective milk based antibodies and the mixture of organisms competing for resources.  The normal motion of the gut and voiding of faeces allows flushing of excessive bacteria and toxic by-products.

At weaning many changes occur which include:

What are the consequences?

All of these changes have a tendency to allow hindgut proliferation of enterotoxigenic E coli - bacteria present as part of the gut flora - sometimes exacerbated by challenge of additional bacteria such as Salmonella.  These E coli release several types of toxins that disturb the natural fluid balance in the gut leading to fluid outpouring and ultimately scour, typically 5-7 days post weaning.  The result is: 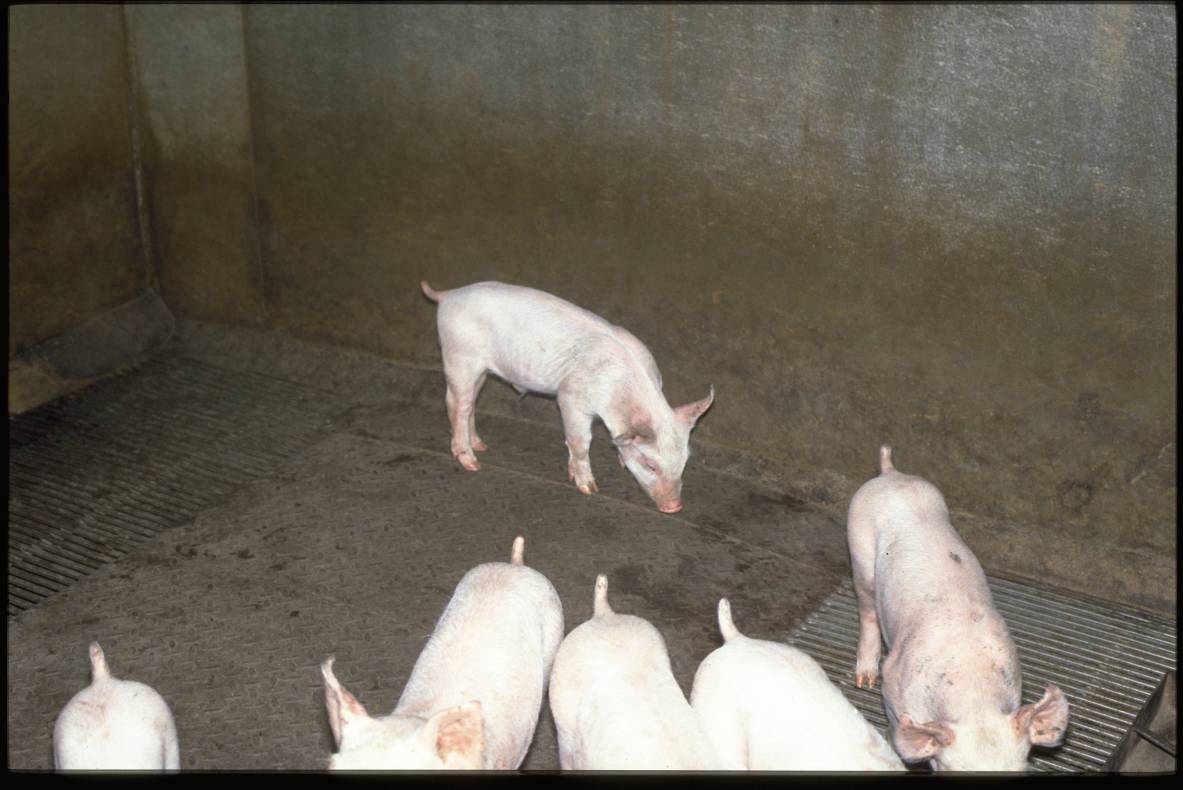 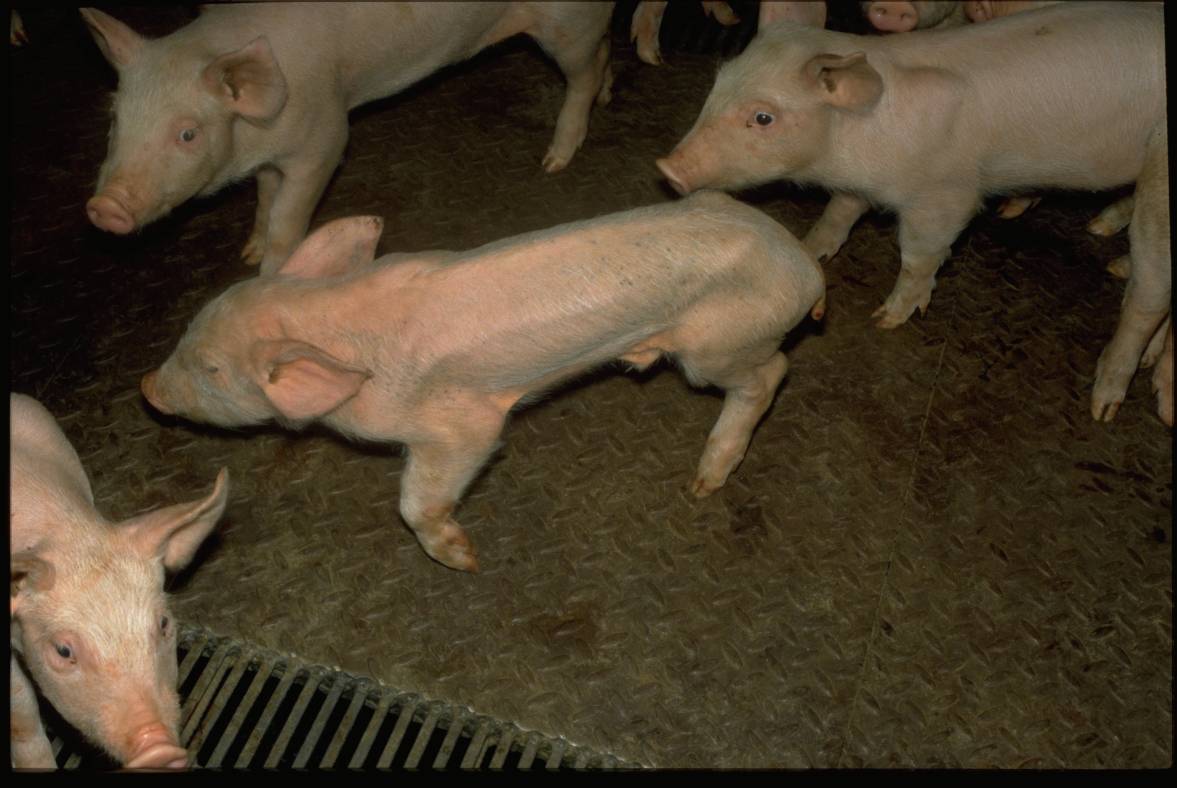 Fig 2: Condition loss can be severe and death will follow

In addition other toxins produced by specific strains of E coli bacteria are absorbed into the body causing toxaemia and rapid death (see below).

In addition to the inevitable changes occurring at weaning a number of management factors can exacerbate the problem:

1)  Chilling - Low or variable temperatures and especially draughts tend to force the pig to redirect its blood supply away from the gut towards vital structures (heart, brain, etc.) leading to gut stasis which further allows microbial proliferation and toxin production. Failure to flush out toxins by faecal voiding means they remain in the intestine to cause direct damage or to be absorbed.

2)    Hygiene. The greater the environmental challenge of bacteria the more likely they will overwhelm the pigs gut leading to enteric disease.

3)    Development of the normal gut flora (microbiome). The piglets intestine starts to become colonised from birth and part of the normal developmental process is for a population of microbes to build up which can both aid digestion in later life but also operate the effect of competitive exclusion whereby the growth of beneficial bacteria suppress the multiplication of harmful ones

4)  Feeding practice - The more digestible the diet the less nutrients pass into the lower gut on which bacteria thrive.  Anything that affects digestibility adversely will precipitate scour.  This includes:

a)   Use of indigestible ingredients - raw cereals and complex vegetable protein

c)   Gorging - The provision of feed ad lib post weaning will encourage some pigs to gorge - compared to the more controlled milk supply from the sow.  Small amounts provided little and often will reduce the risk.

5) Complicating infections such as salmonella, rotavirus, subclinical coccidiosis will all exacerbate the effects of proliferating toxin producing E coli.

The primary effect of gut disturbance at weaning will allow proliferation of harmful strains of bacteria - especially E coli - with toxin release leading to scour, dehydration, acute enteritis and death. This is typically seen within 7days of weaning and can be confirmed at post mortem examination or if milder by identification of harmful E. coli in swabs collected from scoured pigs 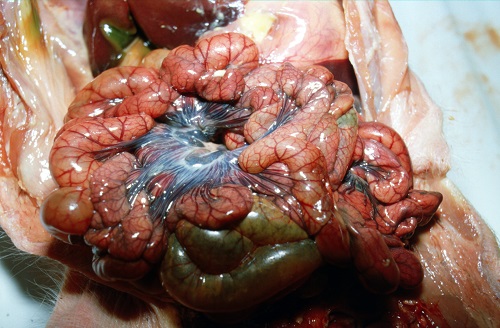 This is a very specific E coli toxaemia occurring at least 5-10 days after weaning and often later as a result of post weaning proliferation in the gut of strains of E coli producing the oedema or shiga toxin.

Oedema is fluid accumulation in extra-cellular spaces.  In this case the oedema occurs in the abdomen and brain.  Typically the disease occurs in the best pigs at weaning, which may be found dead up to 4 weeks post weaning.  Individuals found alive are depressed, rarely scoured, have swollen eyelids and produce a high-pitched characteristic and unmistakeable squeal.

It is reported that back in the 1960's and 70's Bowel Oedema formed a major challenge to the newly developing modern UK pig industry. By the 1980's it had largely declined to be something of a rarity possibly associated with better environmental control for young weaned pigs. The disease has seen something of a resurgence in the last 3-4 years and is now a common and on some farms persistent problem. Whilst historically it occurred at 10 days post weaning recent outbreaks may have been delayed. The widespread use of Zinc Oxide at therapeutic levels in diets for the first 2 weeks after weaning may be implicated in this delay

Fig 4 and 5 shows typical post mortem signs.  The triggers for oedema disease are exactly the same as these for post weaning scour but occur where specific E coli stains exist and typically with later weaned piglets (5-6 weeks). High feed intake and gorging are major triggers - hence the tendency for it to occur in the best pigs.

The typical case may present as a sudden death or of a depressed pig showing nervous signs. - blindness, head pressing and unsteadiness progressing to lateral decumbency and twitching of the limbs. A high pitched squeal may be heard as a result of fluid build up (oedema) in the larynx) Full blown convulsions typical of meningitis are unusual. The disease must be differentiated from all other nervous diseases of weaned pigs including meningitis (Strep suis, Haemophilus parasuis, etc), middle ear disease, salt poisoning(water deprivation) chemical toxicity as well as rarer poliomyelitis inducing viral infections. Where pigs are found dead the post mortem examination will differentiate Bowel oedema cases from other conditions such as mulberry heart disease.

The disease can be confirmed by identification of known bowel oedema causing strains of E coli from the gut contents, confirmation of the specific Stx2e shigatoxin in gut contents or rectal swabs and histopathological examination of the brain which will show typical oedema within CNS tissues 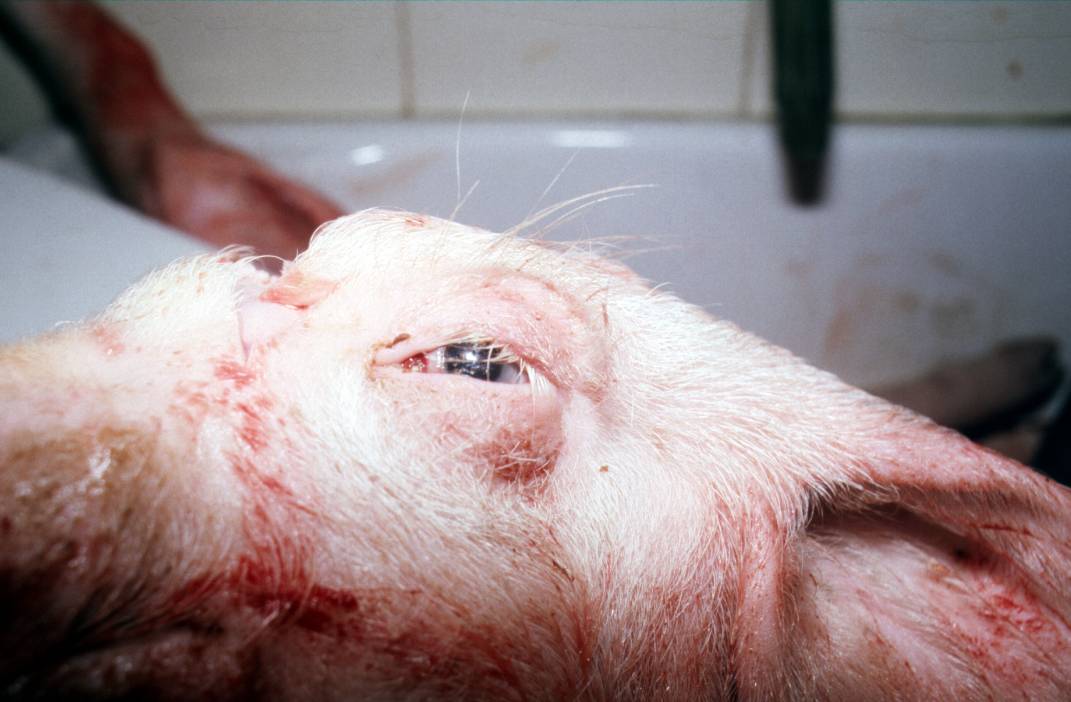 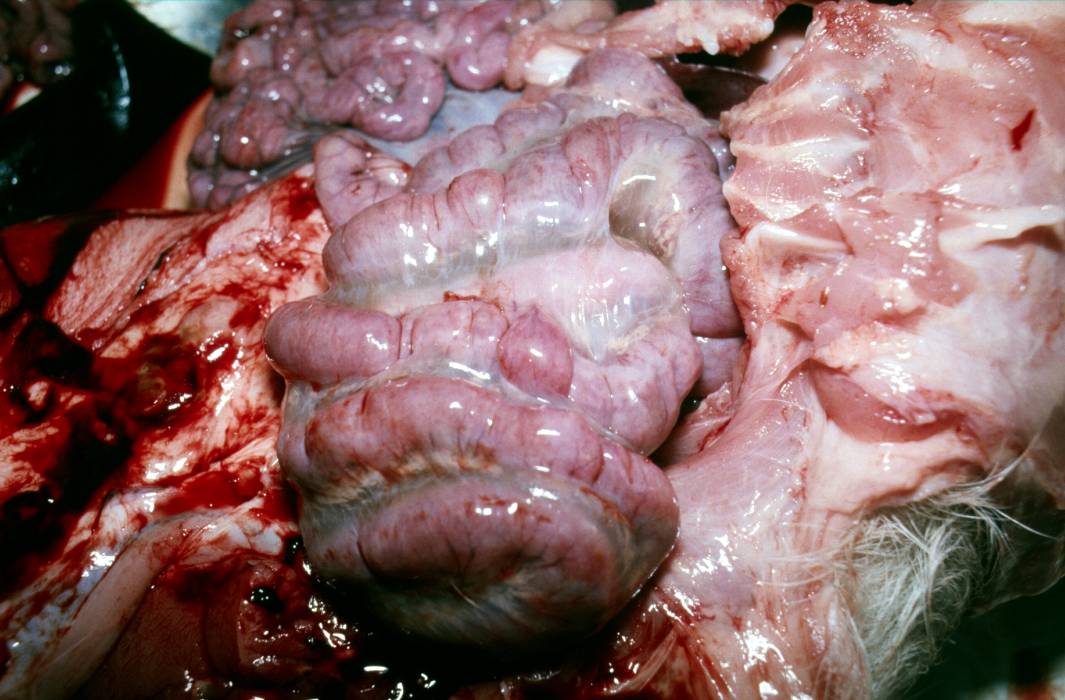 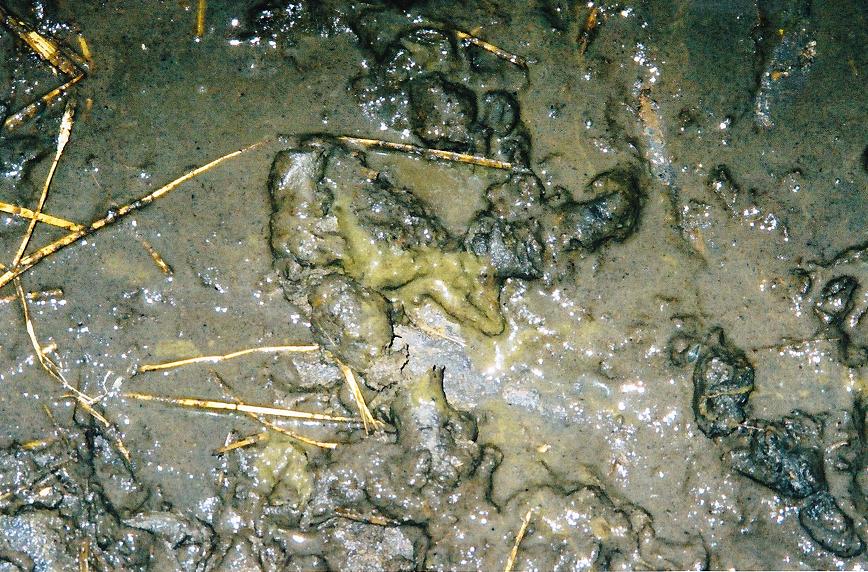 Fig 6: Post weaning scour can cause and be caused by poor hygiene

A wide range of pharmaceutical and nutraceutical products are available for use in weaned piglets aimed at reducing gut proliferation and reducing diarrhoea.  They include:

1)  Organic acid incorporated in diets or via water

2)  Enzyme use in diets to aid digestibility

4)  Zinc oxide inclusion in diet - This can only be done under veterinary prescription and should only be incorporated in starter diets for two weeks post weaning at a level to give 2500 ppm zinc (note ZnO can suppress appetite). Recent work has shown that the inclusion of phytases in piglet diets has a sparing effect on Zinc Oxide allowing lower levels of inclusion although this would be off licence use. Similarly claims are made for certain chelated zinc products to replace therapeutic ZnO but such claims require further validation and evidence of efficacy.

The whole farming industry is coming under pressure to reduce the use of antibiotics and to use them responsibly.  Clearly when pigs are scoured, rapid treatment is essential under veterinary direction ensuring the correct dose is delivered for the prescribed length of time.  The choice of treatment should be determined with the help of bacterial sensitivity tests in the laboratory and by experience on the farm or holding.  Unfortunately we have lost effective treatments over the years and two of the most effective currently available have huge implications for medical use.  Fluoroquinolones (e.g. Baytril, Marbocyl) are only available for individual administration whilst colisitin is water based oral treatment that is an important medicine for treatment of antibiotic resistant bacterial disease in people. Both medicines should now be reserved for use only as a last resort where alternatives have been shown to fail.

Where post weaning scour is a predictable and repeating problem post weaning, it may be appropriate to use targeted antibiotics in feed or water at weaning for a short period but this should only be done after attending to the environmental and managemental factors detailed and even then only with laboratory diagnostic support.

Apramycin, trimethoprim/sulpha,florfenicol and Lincomycin/spectinomycin may be appropriate but decisions on treatment are entirely at the discretion of the veterinary surgeon.

It should further be noted that antibiotics applied inappropriately can be counterproductive. It is common practice in many pig producing countries for systemic or oral antibiotics to be administered to piglets at birth - often in conjunction with iron injections. This may be use to prevent neonatal scour, joint infection or completely unacceptably 'just in case' . Quite apart from the questionable justification for such use it may have a dramatic effect on the developing microbiome of the piglet such that the normal balance is never achieved and on a number of farms withdrawal of such treatments has led to an improvement in gut health and less enteric disease post weaning. (without precipitating major baby piglet disease)

Despite attempts over many years to produce vaccines that will provide post-weaning protection, none are available to control enteritis (E coli vaccines given to sows are highly effective at preventing neonatal scour but have no effect on the older piglet).

In recent years a shiga toxin vaccine (Ecoporc Shiga:Hysolve UK) has come to market for the control/prevention of bowel oedema. Given as a single dose by injection at 4 days of age the vaccine has proved to be highly effective at preventing BO after weaning.

Post weaning scour (and sudden death associated with oedema disease) is a common problem in the young recently weaned piglet.

By attending to the nutritional and environmental needs of the pig, many of the risks can be mitigated but where therapy is necessary this should be carefully selected, applied responsibly and not used to mask inadequate stockmanship.  Appropriate use of new generation vaccine in the face of bowel oedema is a useful tool in the whole management of health of the young pig.