In 1991 a new disease syndrome appeared dramatically in the U.K. causing serious disease problems in the breeding herd, young sucking piglets and in growing pigs.

Disease in the young weaned pig and older growers was largely of the respiratory nature, but in sows and young pigs, reproductive losses and high mortality respectively were the principal presenting signs. Within months, the disease, which had been present in Continental Europe for several years, was confirmed as due to an arterivirus, previously unrecognised. Disease in young pigs and growers is described in other papers in this series, thus this paper will concentrate on effects in the breeding herd and new born pigs.

The disease spread rapidly and steadily across the U.K. to ultimately affect an estimated 60% of the national herd and remains one of the most important disease challenges for pigs, having the ability to remain and recycle within a herd over many years.

The cause of PRRS in an RNA virus, which appears inherently unstable and is thus undergoing a continual evolution. Two distinct types are now recognised: a US-based strain and a European type, which are fundamentally distinct but both of which are changing genetically all the time.

Whilst readily introduced into a herd by infected pigs, the virus is also excreted in body secretions (saliva, urine, faeces and semen) and is thus easy to spread both within and between farms. Furthermore, the virus is excreted from the lungs and will spread within pens, rooms and buildings by aerosol. In primary herd breakdowns, virus excretion can reach very high levels such that plumes of infection are produced which can spread over distances exceeding 3 kilometres from farm to farm. This was very much a feature of the early stages of the disease in the early 1990's but remains a risk today.

The disease in breeding herds can be split into three distinct patterns, influenced by many husbandry factors and the immune status of the herd. However, the pathogenesis of the disease is fundamentally the same in all cases.

The virus does not affect the egg or very early embryo but viraemia in the sow beyond 14 days' post service will kill embryos after implantation. The virus replicates in both the endometrium and the placenta but as pregnancy progresses the virus spreads from the placenta into foetal organs causing death. Beyond 34 - 40 days of gestation reabsorption does not tend to occur and consequently mummification results. It is a feature of a PRRS outbreak that mummification tends to occur simultaneously in all pigs - distinguishing it from the progressive mummification typical of Porcine Parvovirus - and so all mummified piglets are generally of the same size. Those above 80 days' gestation are particularly at risk, resulting in large mummies. Later infection still will lead to stillborn piglets rather than mummies, and there is a tendency for abortion (before 109 days) or premature farrowing, say at 100 - 113 days. 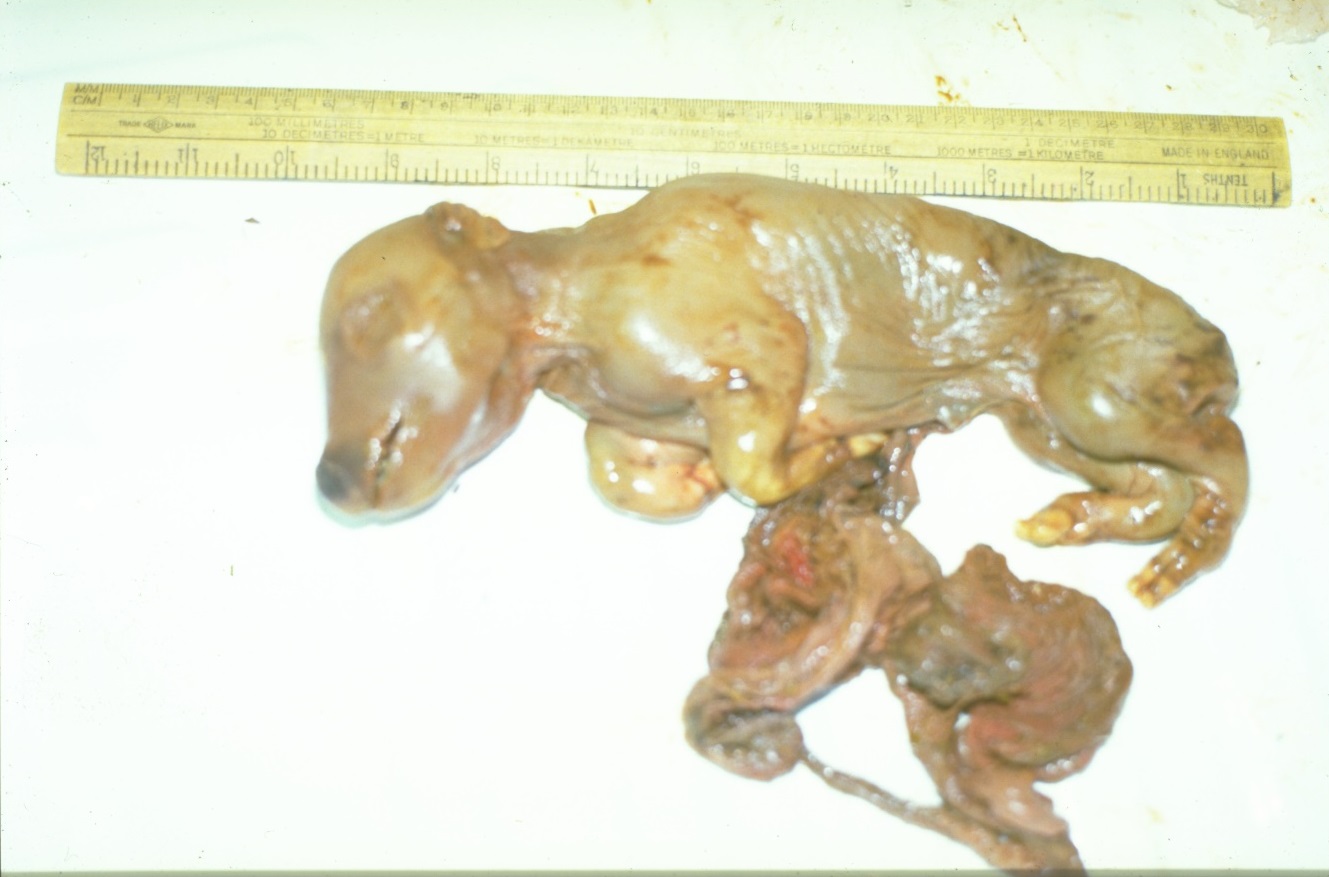 The virus also replicates in the testes of the boar and changes sperm such that there are adverse effects on semen quantity, concentration and particularly mobility, inducing circular rather than progressive motility. In this way conception failure and 3 weeks return to service can occur despite the resistance of the egg to infection. Infection of boars at puberty can lead to permanent sub-fertility.

Piglets that are born infected but alive may be anaemic and weak and succumb to a severe early and fatal scour. They will also spread virus to littermates and neighbouring litters and thus can have implications during the sucking period and post-weaning. Infected pigs may be born with swollen or puffy eyes (Chemosis). 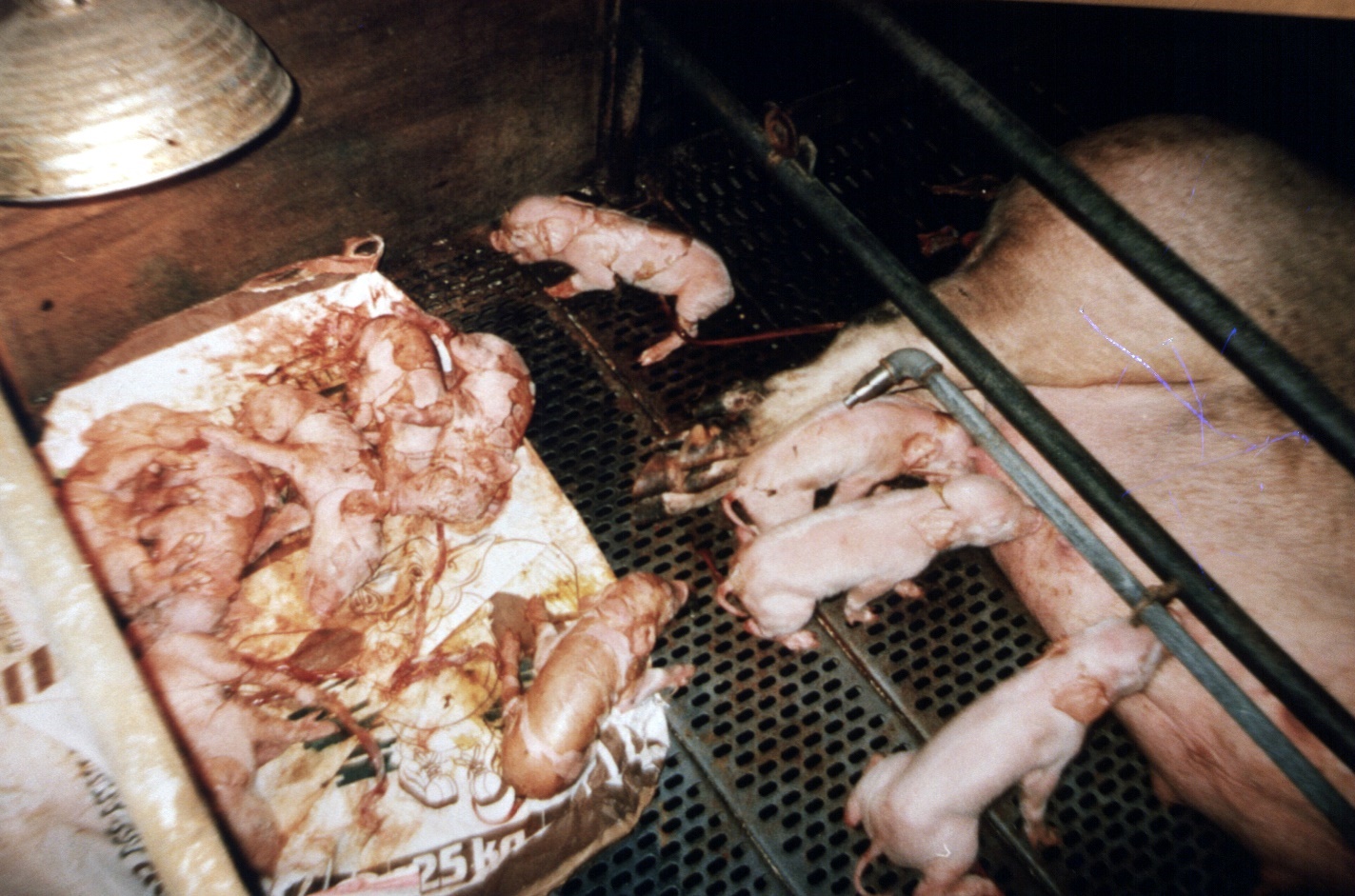 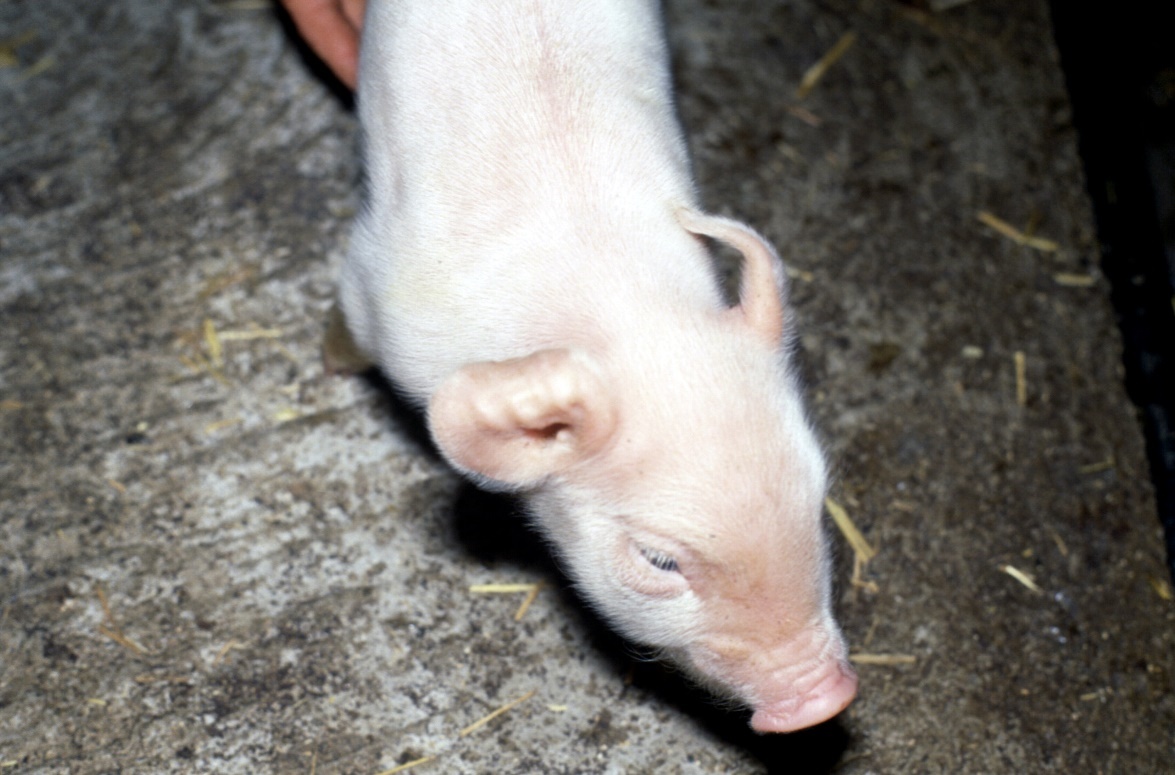 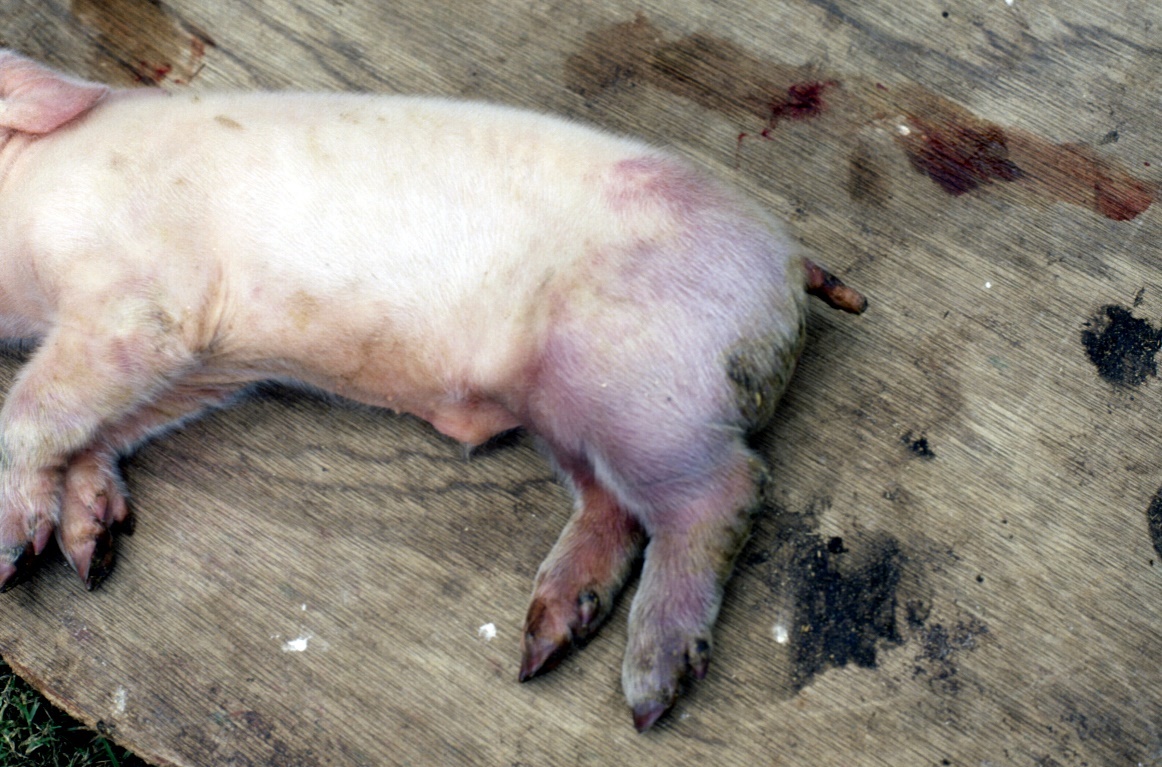 Clinical disease in the sow results in mild fever, inappetance, depression, discoloration of the skin especially the ears but also other areas, and some sows may die especially following farrowing. Agalactia (loss of milk) is an early feature in an outbreak, which continues to what can become very high piglet mortality over 6 - 8 weeks of an initial outbreak. 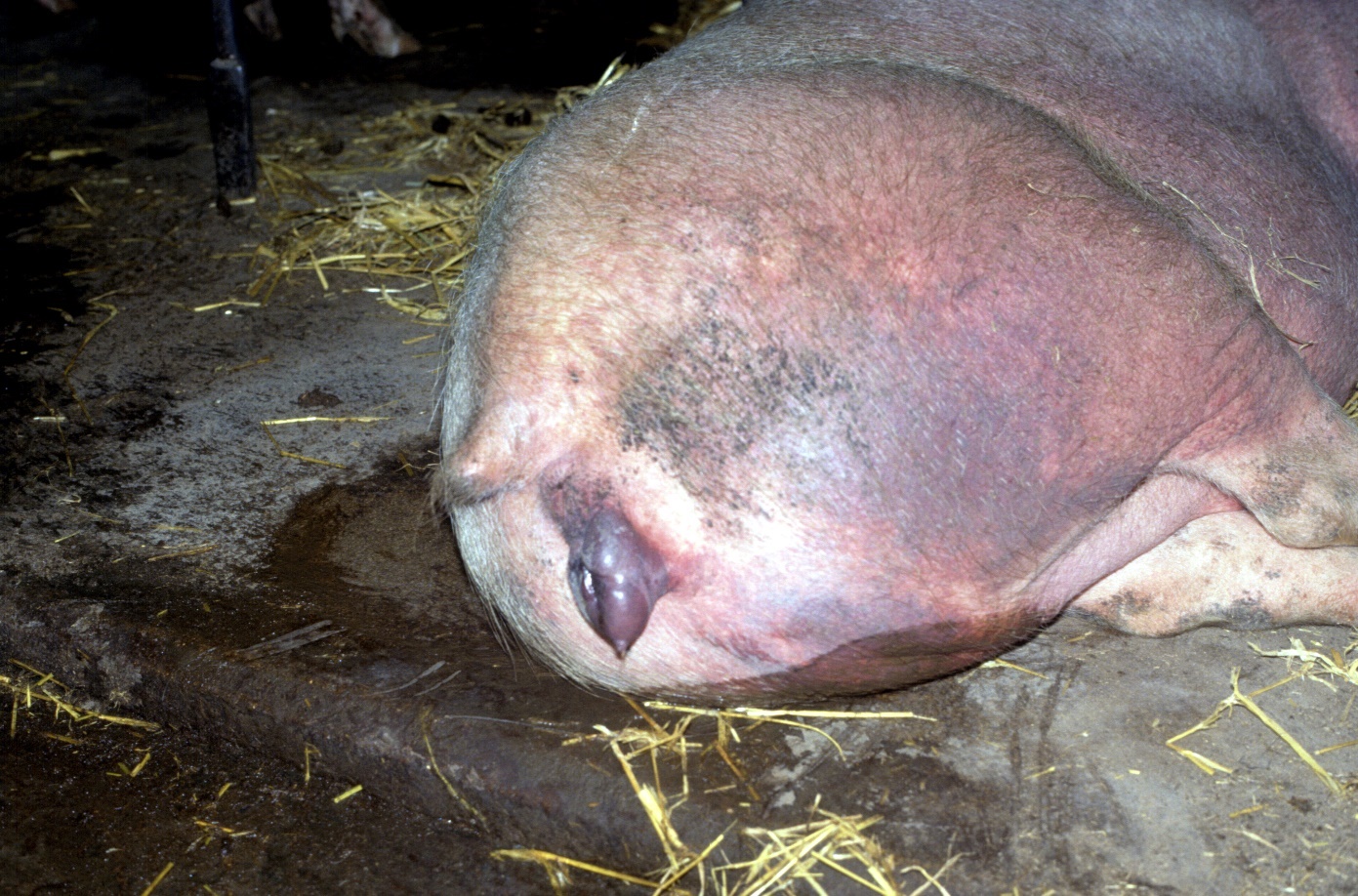 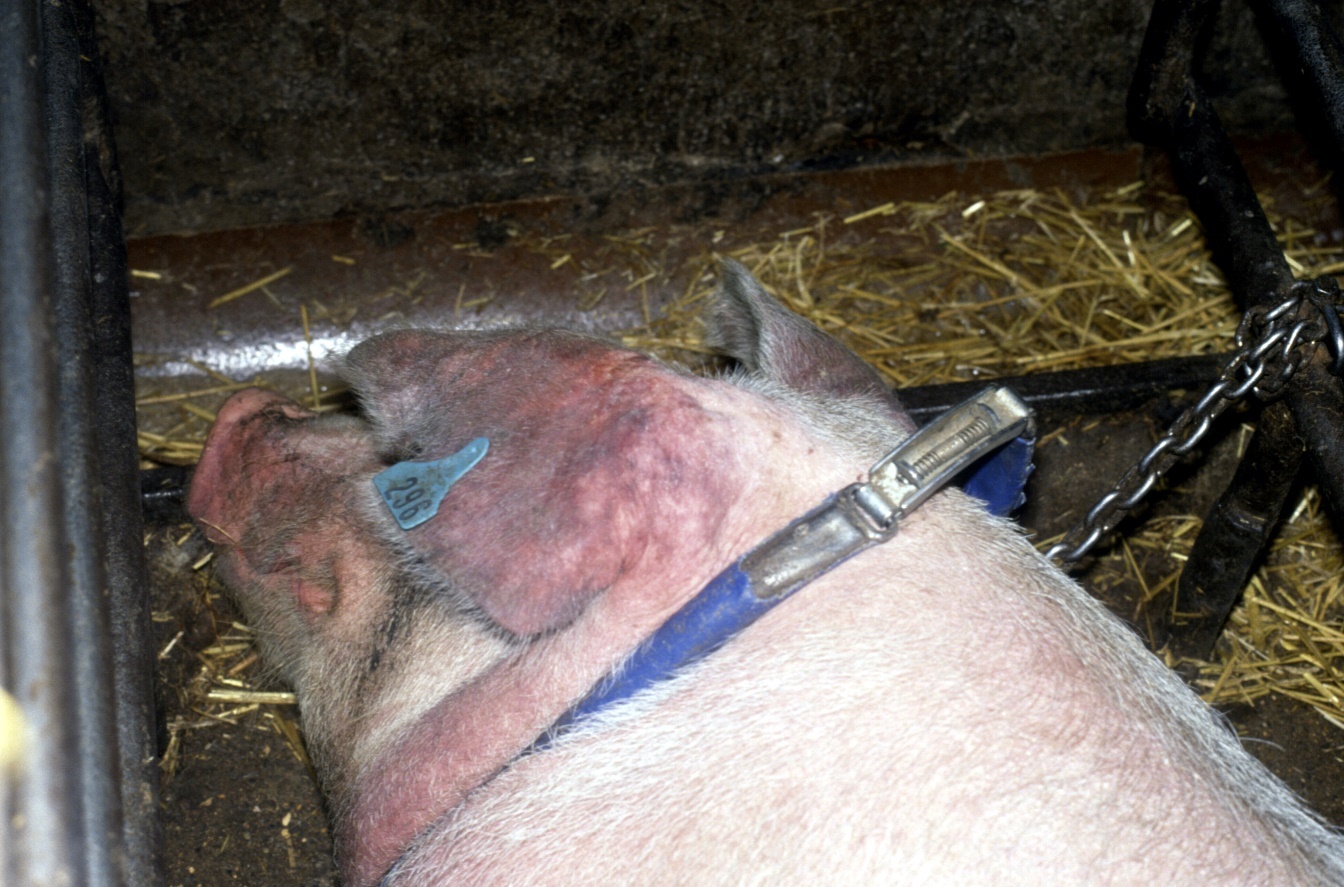 The clinical effects of a primary herd breakdown are summarised in Table I.

Most sows will recover but may prove to be chronically sub-fertile. Gilts primarily affected during or around puberty will often be sub-fertile for life.

Herds previously infected, in which virus persists and recirculates (especially in breeder feeder farms) may subsequently show periodic phases of disease problems that may include bouts of infertility, sows found not in pig, sporadic abortion, premature farrowings and a drop in quality of piglet produced. Such episodes can occur on a repeat basis cyclically say every 6 - 12 months. Progeny produced at this time may be more prone to respiratory ailments through the growing stages.

In other herds, more likely in breeder only or breeder weaner farms, abortion storms can occur, presumed to be due to loss of immunity in sows as the lack of growing pigs on site allows virus to decline and sows return to the naïve state. The virus may be lost from a herd completely over time, particularly in breeding only herds for this reason, thus returning to a naïve state and vulnerable to repeat breakdowns.

The overall impact of a primary disease breakdown can last many months and lead to a production loss in excess of 20% over a year. Repeat breakdowns tend to be shorter lived, less specific and produce regular dips in production.

The relatively recent introduction of saliva collection using cotton ropes has made diagnostic investigation and monitoring much more straightforward and cost effective and is now widely used.

Management of the Outbreak

Once a naïve herd breaks down, it is very difficult to control the damage although the availability of more effective live vaccines in recent years, used early in a disease breakdown, can help to mitigate the effects of the disease.

Once suspected a period of AI use will offset boar damage in the naturally serving herd. The use of Aspirin given in the water to sows in the last 7 days of gestation may help to reduce the chances of premature farrowing. (This is off-licence use of the product Solacyl Dechra Veterinary Products) - and can only be used under veterinary direction under the cascade system.)

For piglets, intensive can save up to 50% of animals but, whilst widely used, in the face of disease, antibiotics are of little value.

Controlled exposure of sows in late pregnancy (previously termed feedback) using farrowing house scour is totally contraindicated as it will spread virus to the most vulnerable late pregnancy sows.

Many herds, especially breeder feeder farms, have to learn to live with disease, and this can only be achieved by ensuring the breeding herd remains immune consistently and upsurges of viral challenge are avoided.

Introduction of replacement gilts is a major challenge as they may:

Isolation of gilts and proper acclimatisation is vital to help maintain herd stability.

The presence of growing pigs excreting virus into the environment of the farm can act to continually top up sow immunity and retain stability, but this will be influenced by the geography of the unit (less likely to happen the more spread out the farm), the production system in place (batch farrowing systems are less likely to maintain virus, especially with all in, all out husbandry). Too close integration of sows with growing pigs can have the opposite effect of overexposing sows with marginal immunity.

It is far more difficult to maintain this constant trickle of infection to sows where pigs are removed from the site at 30kg or in outdoor herds where weaners are physically remote from sows. In the breeding only unit removing pigs offsite at weaning, the virus is only likely to be maintained by the continuous introduction of infected replacement gilts or by external ingress of virus, say from a neighbouring farm. Semen can introduce virus if derived from a virus positive stud.

Inactivated vaccines first become available in the U.K. in the mid/late 1990's but have proved to have very limited value alone in protecting the sow.

Live PRRS vaccines first appeared in the late 1990's and initially were only licensed for use in growing pigs although now a range of vaccines are available licensed for use in sows. Licence recommendations vary with the product and the veterinary surgeon is entitled, where there is compelling evidence of need and with the agreement of the client, to vary the terms of the licence in use. Various programmes are used. Examples include:

1)      Single dose vaccine of gilts on introduction to the herd;

5)      Blanket herd vaccination given to all sows and gilts simultaneously on a regular 3 - 4 month cycle.

It should be noted that vaccination of totally naïve animals with live attenuated vaccine is not recommended and can cause particular problems in gilts. Vaccination of boars does not typically fall within the licence of current products available although it is not specifically contra-indicated.

It has not proved possible to eliminate PRRS from an infected, continually producing breeding herd without either total or at least partial depopulation in combination with vaccination. Breeding only units may "self-cure" and programmes have been devised in which intensive vaccination, herd closure for 9 - 12 months (i.e. no gilt introduction) and removal of weaners from the site down to an age where circulation of virus is shown to not be occurring have proved successful. Eradication should only be considered where disease is unmanageable and the risk of reintroduction can be minimised by a combination of biosecurity and geography and ensuring that semen supplies -through which the virus can pass - remain PRRS free.