Disease caused by Porcine Parvovirus (PPV) is restricted to the pregnant sow or gilt with the virus capable of infecting and destroying both embryos and foetuses.

It is the most common cause of what was traditionally called the Stillbirths Mummification Embryonic Death and Infertility (SMEDI) syndrome.  Whilst once common as a clinical disease producing explosive outbreaks of litter loss, the application of highly effective vaccination programmes mean that now it is an uncommon problem. 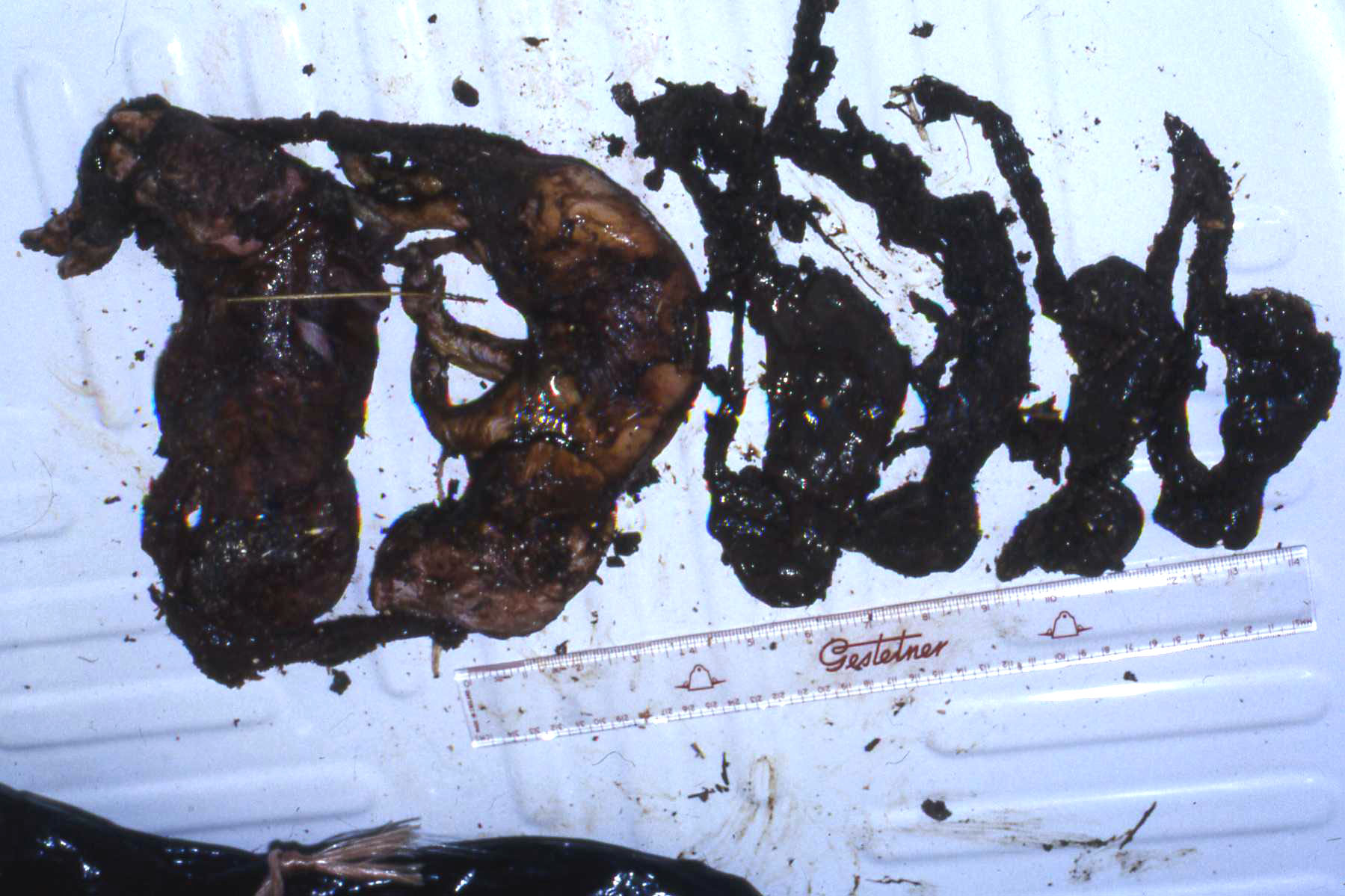 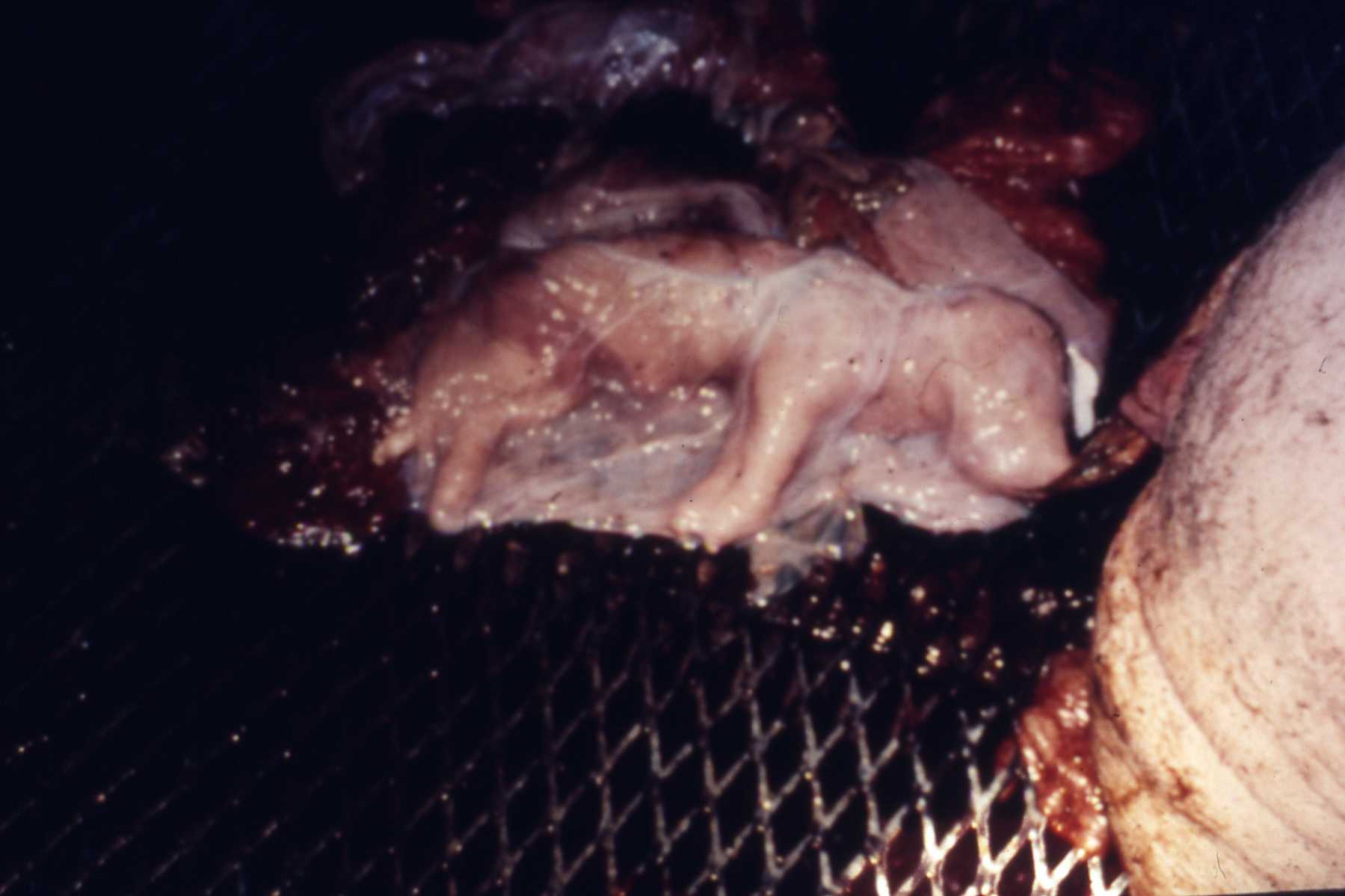 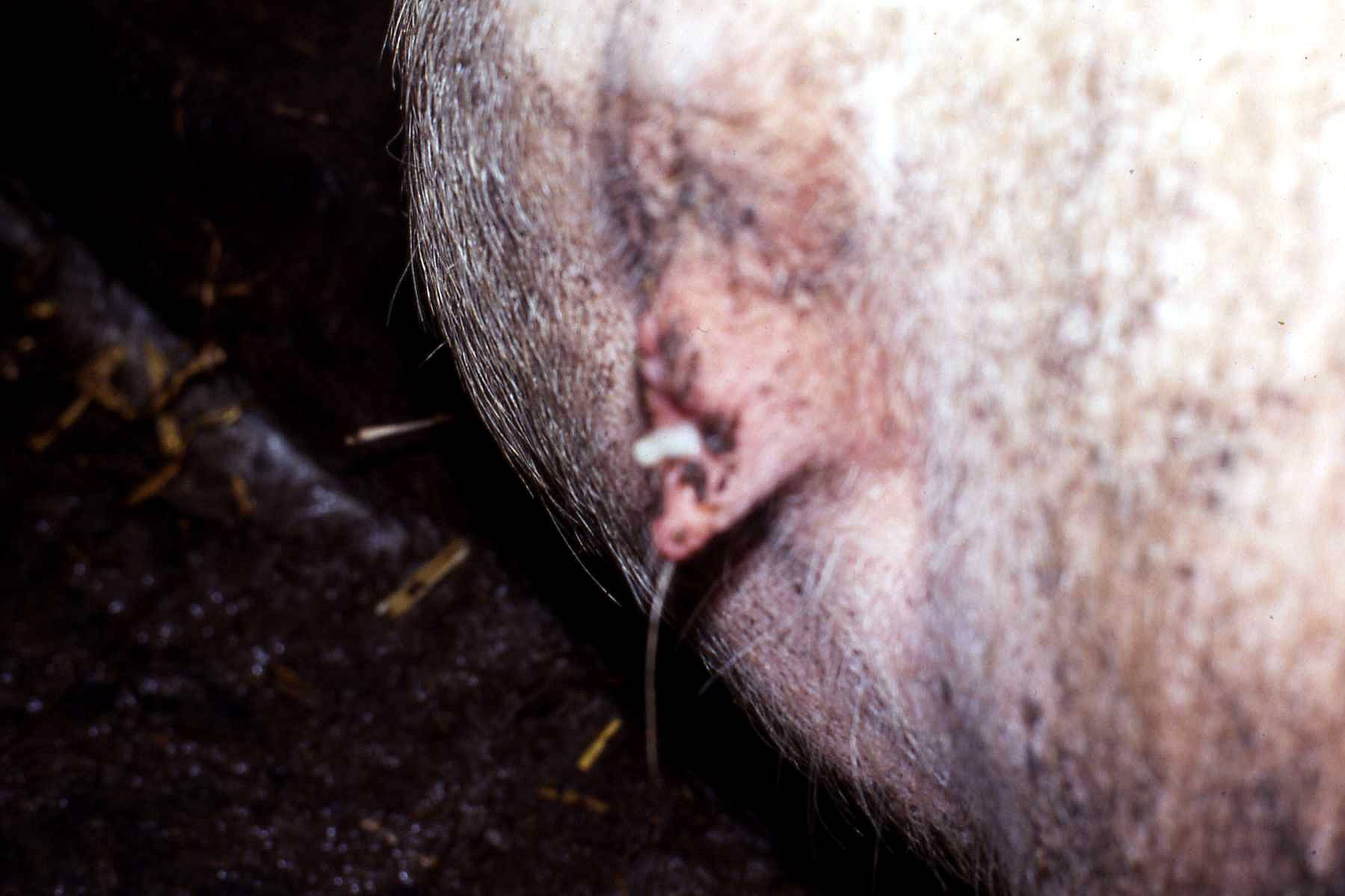 Fig 3: Discharges are not a feature of PPV disease

Depending upon the stage of pregnancy at which the naïve sow becomes infected, the presenting signs will vary.  If infection is spread into the uterus (either by the oral or venereal route) around the serving period, total loss of embryos can occur resulting in normal 3-week return to service.  Slightly later infection will destroy early embryos, wholly or partially within the litter; this can produce an abnormal return to service or small litters if only some embryos are killed.  Generally it is assumed that if less than 4 embryos are present at the attachment ('implantation') stage pregnancy will fail completely but very small litters (1 or 2 piglets) can be produced if embryonic death occurs after 14 day, but before skin and bone are formed at 30-35 days.

Later infection of the litter, once foetal structure is formed, leads to death of the foetuses and partial reabsorbtion creating mummification.

At no time during the infection process will the sow demonstrate any clinical systemic illness - PPV is a disease of the uterus and unborn litter only.

The virus will spread within the uterus from piglet to piglet resulting in the classic 'Parvo' litter of multiple but progressively larger mummified pigs (fig 1). Pigs infected very late in pregnancy may show no prenatal damage, but be born dead.  In some cases this may be due to slow/disrupted farrowing leading to intra-partum deaths.

Where whole litter mummification has occurred there is no signal to start farrowing and a previously confirmed pregnant sow may 'bag up' but simply fail to farrow.  She will not come on heat either.

Furthermore unlike some other infectious causes of reproductive failure in the pig (eg Aujeszky's Disease, PRRS) abortion of the litter is not a feature of PPV infection.

It should be noted that the following are very unlikely to be caused by PPV infection:

The classic picture of explosive disease (which can occur in an unvaccinated herd every 3 - 6 years) is virtually pathognomonic of PPV disease.  Parvovirus can be demonstrated relatively easily within mummified foetuses.  Care should be taken in interpreting serology from affected sows; a positive titre simply means that the sow has been exposed to the virus at some time previously - it does not necessarily mean that has caused a problem.  Paired sera are needed to confirm disease by blood test alone. Identification of the virus within mummified foetuses will confirm the diagnosis.  A wider range of other infectious agents should be considered when dealing with an outbreak of reproductive failure in the pig herd with the pattern described above.  These include:

Once an outbreak has started there is nothing that can be done to stop it.  The first wave of sows returning to heat at an abnormal interval will coincide with infection of later pregnant sows where piglets will begin to mummify.  They will appear 4-6 weeks later at farrowing.

The key to control of PPV disease is active prevention of infection at dangerous times (i.e. during pregnancy) by ensuring gilts are immune prior to service.

PPV is a very strong antigen and as such vaccines are highly effective.  Furthermore, for practical purposes, natural infection leads to life-long protection.  Thus a number of strategies can be applied:

Natural challenge can be achieved by active exposure of unserved gilts to weaner faeces up to 2 weeks prior to service as a form of controlled exposure to other agents for which no vaccine is available, known on the farm and should only occur under veterinary direction. Exposure of gilts to cull sows may also provide contact with virus although older immune animals are a poor and unreliable source of virus. PPV is a resilient virus which survives well in cool damp conditions; as such incomplete cleaning of gilt reception pens often provides exposure for successive batches of gilts. Immunity acquired by natural infection tends to be lifelong.

Boars do not suffer any clinical signs or semen damage from PPV infection.  However, they can become infected, and the virus can be excreted in semen at lleast for a short period of time, potentially infecting naïve females that are mated/inseminated by him.

For this reason, some veterinarians advise 6 monthly vaccination of boars and such procedures are common practice in AI studs.  It should be noted that vaccines do not specify use in boars and as such this practice involves off licence use and should not be done without specific veterinarian instruction.

Whilst an outbreak of PPV disease tends to last 3 to 4 months the overall impact of a typical disease problem can be to reduce overall sow productivity by 3-4 pigs per sow over a year.  Clearly this means a devastating shortfall over this 3 to 4 month period.  (It should be noted that once an individual sow or gilt has produced a 'Parvo' litter she would then be solidly immune and very unlikely to ever repeat the problem.)

For a 500-sow breeder/feeder farm affected by acute PPV disease a shortfall of 2000 piglets over a year equates to £70,000 losses against a maximum cost of a full vaccination programme of approximately £2,000/year.

It is therefore highly unwise to ignore this disease and any cost cutting without intensive serological monitoring and adjustment of vaccine requirements is a false economy.