Infection associated with Porcine Circovirus type 2 (PCV2) in pig herds, producing Post Weaning Multisystemic Wasting Disease (PMWS) and Porcine Dermatitis Nephropathy Syndrome (PDNS), appeared in the United Kingdom in the late 1990s and is now ubiquitous. Very few countries in the pig keeping world would claim to be free of the disease, although Australia may remain free of disease.

As with any disease entering a naïve population, over a period of time the clinical picture evolves and the enzootic picture presented can look very different to that seen in the original epizootic situation.

Furthermore, advances have been made in control of the disease, particularly with vaccination against PCV2 becoming available.

This article will describe the evolving clinical picture, diagnosis and control, and assess the current picture in the U.K. and the implications for the pig industry in the long term.

There was considerable uncertainty over the cause of the disease syndrome seen in the early days. Clinicians, particularly in some countries such as the U.K. and Denmark, were adamant that the epidemiological picture pointed strongly towards a new infectious disease spreading from farm to farm across regions, albeit the spread occurring in indeterminate ways. Researchers however were suggesting that the cause was PCV2 virus, which could be shown to have been present in pig populations for many decades, acting in conjunction with other infections such as Porcine Parvovirus (PPV) or PRRS. It was even suggested that vaccination for enzootic pneumonia triggered the disease. It is now clear that at least five different subgroups or strains of PCV2 exist and that a shift in the genome occurred which turned a harmless commensal organism into a devastating pathogen.

PCV2 is relatively resilient in the environment and can survive sixty days or more in favourable conditions. It can be killed by disinfectants and high alkaline pH (e.g. lime) but is resistant to ethanol (as used in alcohol hand washes).

In the first six to eight years of the disease, the picture was dominated by two clinical syndromes.

This typically affects pigs of seven to ten weeks of age with a relatively sudden onset and dramatic loss of condition, hairy appearance and slow death. Coughing was sometimes seen but in some outbreaks a profuse watery, unpleasant smelling scour was the predominant sign. Losses on some farms reached 50% of pigs, although in many cases survivors of the initial wasting disease succumbed to secondary infection with pneumonia and septicaemia prominent. Disease persisted in herds for years. 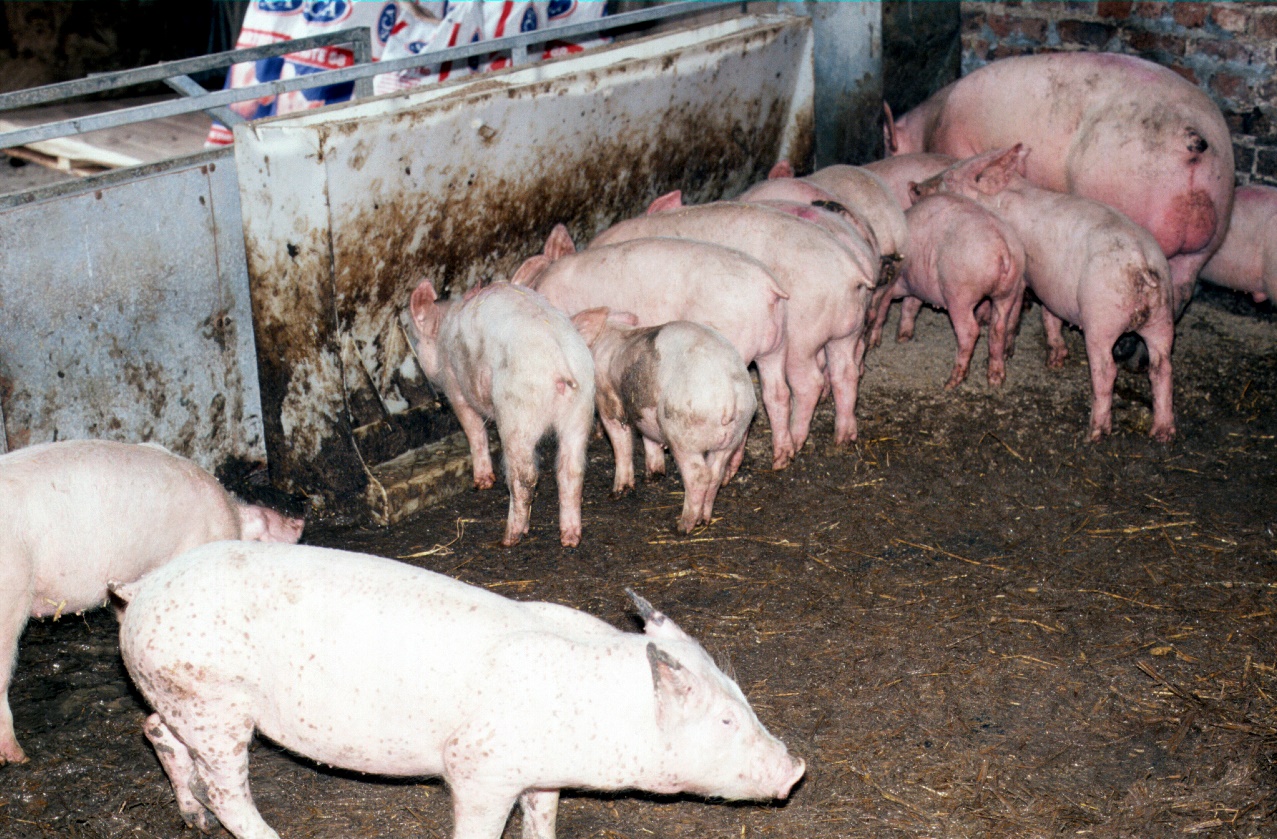 Diagnosis could be made at post mortem examination where lymphadenopathy is prominent, especially in the inguinal lymph nodes. (Figure 2) Confirmation of the diagnosis is based on demonstration of PCV2 in the lymphoid tissues. In severe cases the enlarged lymph nodes are totally depleted, leaving the pig with no humeral or cellular immunity. 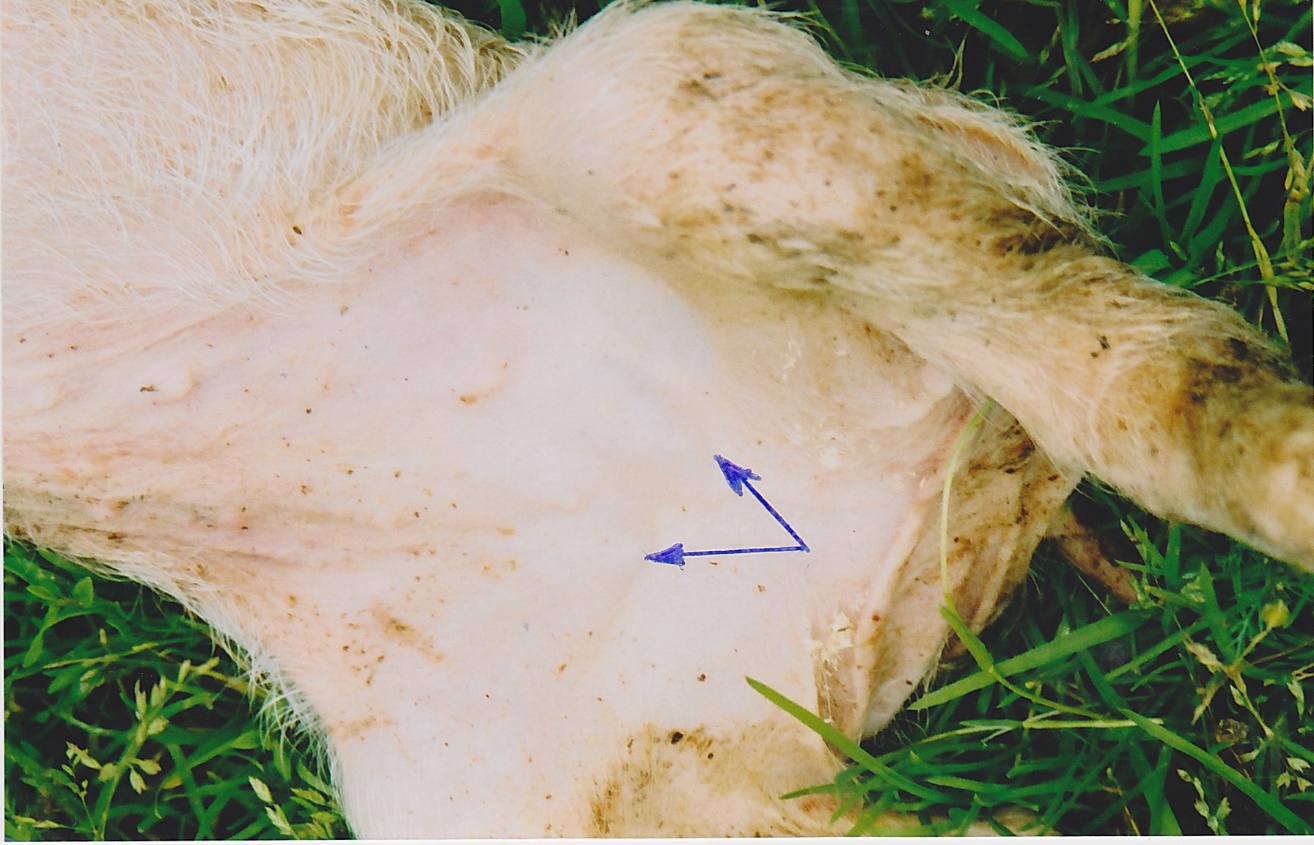 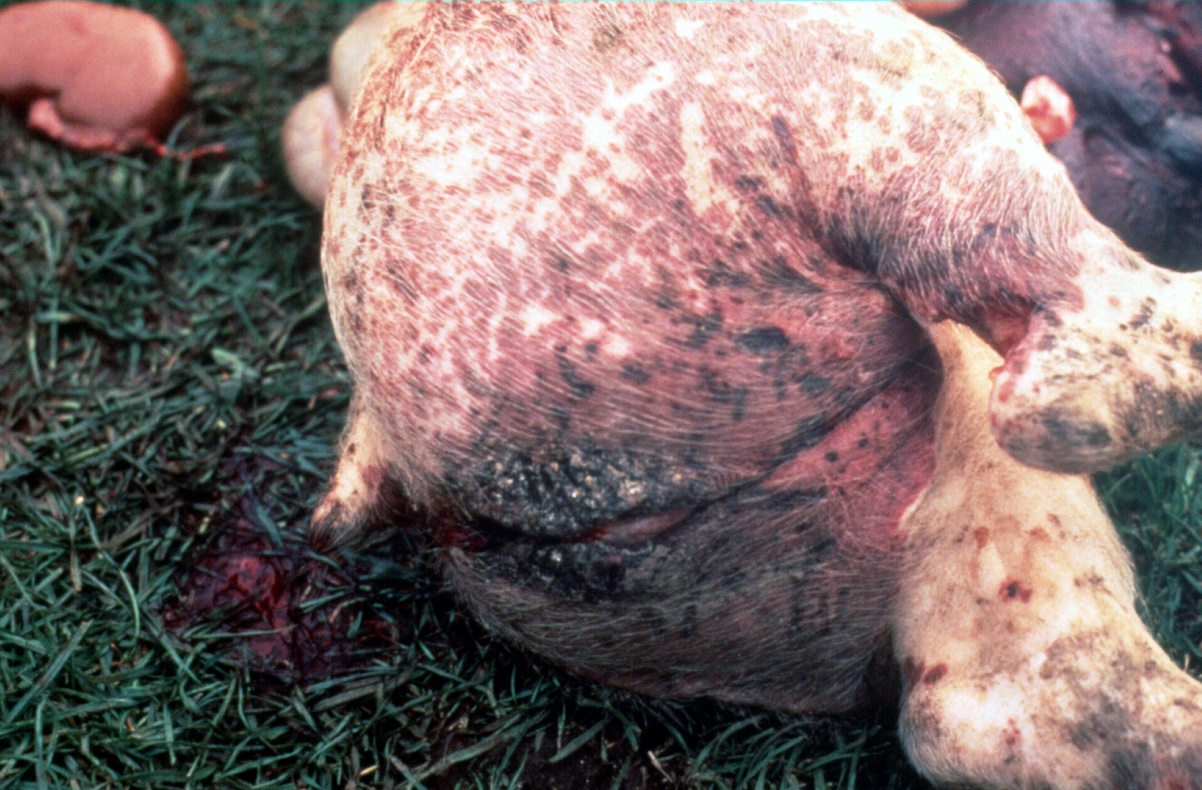 Sudden onset multiple haemorrhages on the skin with an acute glomerulonephritis could lead to high death rates in weaners above twelve weeks of age. Pigs that survived suffered massive protein loss through the kidneys with the resulting hypoproteinaemia leading to dependent oedema.

In very early cases this was the primary presentation and death rates were high. As time passed, the condition became more sporadic but nephritis in slaughter pigs remains a common finding.

Other clinical presentations associated with PCV2 infection have been:

1.   Sudden deaths in grower pigs typically twelve to fifteen weeks' old, associated with massive fluid accumulation in the lungs with the pig drowning in its own fluids. PCV2 virus could be demonstrated in the lung tissue in large quantities. This presentation is now rare.

2.    Nervous disease was seen in some individuals in early stage disease, creating confusion with Aujezsky's Disease and other CNS pathogens. Some pigs developed tremors at eight to ten weeks of age (similar to congenital tremor in newborns), suggesting some damage to myelin sheaths. This is now very rare.

3.   In the early stages of the disease breakdown in breeding establishments, many practitioners argued that the disease had adverse effects on the reproductive capacity of the sow. It is now known that PCV2 virus is capable of infecting and damaging embryos in early pregnancy, leading to pregnancy failure or depression in litter size and also can damage the developing foetus in later gestation, leading to abortion, mummification and stillbirths. Whilst there is limited field diagnosis of such specific problems, the potential for reproductive damage must be considered.

4.   Acute systemic disease in grower pigs, despite use of vaccine. Severe depression, pyrexia loss of condition, respiratory disease and high mortality are seen.  Again, this is rare now. (Figure 4). 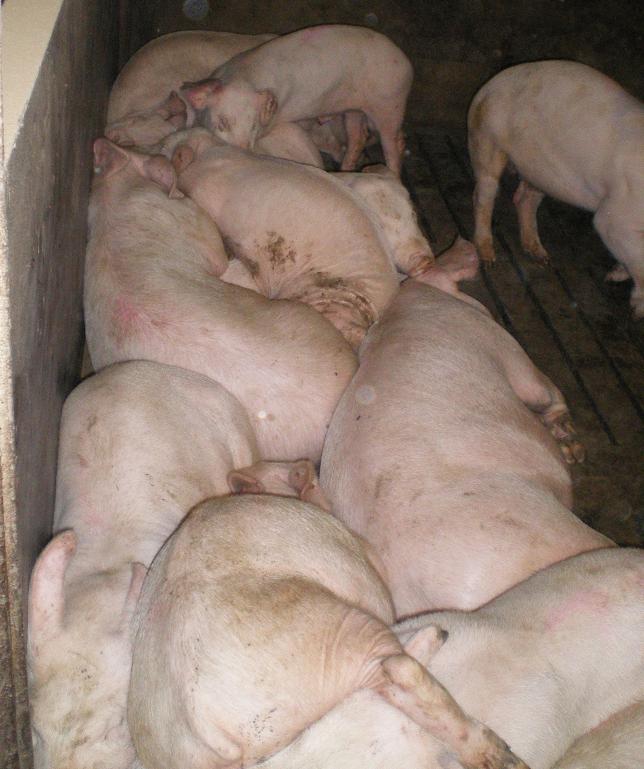 Disease associated with PCV2 appears like many infections to be dose related. Whilst it appears that it is very difficult to infect a pig above ten weeks of age, control of the disease by vaccination of sows - providing colostral protection to piglets - has only proved successful in a small number of farms. The principle method of control now is to vaccinate piglets directly in the first month of life. A relatively few herds in the U.K. remain clinically free of the disease without vaccination despite the known presence of PCV2 in the herd.

Research work has indeed shown that it is very difficult to actively infect a piglet over ten weeks of age with PCV2. The fact that many farms have seen the disease creep into older growing pigs may suggest that, although initial infection with PCV2­ still occurs in the young pig, in some cases it does not multiply to the point of causing pathological damage until later, possibly due to partial immunity derived originally from colostrum.

Thus, picture can involve pigs from five to twenty-five weeks of age, can produce anything from sudden death to wasting pigs and commonly involves either enteric disease (watery scour is common) or respiratory signs. Circovirus associated disease is thus now often non-specific and strongly influenced by the overall health status and standard of the herd.

Historically, control programmes have tended to revolve around active control of complicating diseases by medication and/or vaccination coupled with rigid application of sound management practices which have been established over many years. The Madec 20-point plan was no more than re-stating the rules of good husbandry that has been long established:

There were suggestions that younger sow herds produced piglets less vulnerable to disease and that extending weaning age improved disease control, although these features were never definitively proven. The wide application of batch farrowing systems has assisted all in, all out stocking of buildings and has undoubtedly helped in disease control where it is rigidly and correctly followed.

Furthermore, breeding adjustments were made in an attempt to improve heterosis and produce pigs that were more capable of resisting the disease. Hampshire and Piertrain cross boar lines were introduced as terminal sires, with some benefits although their use - which remains widespread today -as a primary control technique has been somewhat overtaken by vaccination.

Obviously the costs of the disease will depend on the severity. If pigs die in the older grower stage they can cost the farm £50 or more. Thus a 500-sow unit with a modest 5% mortality will have costs of £28,000 in deaths alone. A loss of 40gm per day would add seven days to slaughter with additional feed costs of £2 plus per pig, giving total costs of £50,000 per year, plus medication. Vaccination, at worst, in such a farm, would cost 25% of this.

Were mortality reached 25 to 30% of weaned pigs, the costs multiplied alarmingly.

Vaccination against PCVAD is now widespread, with claims that over 80% of young pigs produced in the U.K. are vaccinated.

The early stage vaccines appeared in 2007 as imports from continental Europe and the U.S.A. and included a vaccine targeted at sows rather than piglets, and a chimeric vaccine (made from PCV1 and 2 antigens). The latter experienced problems with both lack of efficacy and adverse reactions, and was withdrawn.

In April 2008 BPEX introduced a research programme into PCV2 vaccination, which in part involved subsidisation of the cost of vaccine for pig producers. This finished at the end of January 2009, and a total of 483 farms applied to be part of the scheme, providing vaccination either for sows or their progeny, representing over 300,000 sows on pig keeping farms: more than 75% of the national herd.

Since then, vaccination of piglets has become standard practice with one of a number of vaccines either given as stand-alone preparations, manufactured in combination with other antigens (e.g. Mycoplasma hyopneumoniae), or applied by mixing with other compatible vaccines. They are all given by injection, either intramuscularly or, more recently, by intradermal application.

Vaccine can be given to pigs from three weeks of age, although it should be noted that at least one product has a very high potency and, as an intramuscular injection, is better given to older, stronger pigs of four weeks' of age or more (Porcilis PCV).

It should also be noted that none of the vaccines available make any claim to prevent PCVAD. They are all designed variably to reduce viraemia, reduce mortality and reduce pathology.

Whilst they have done an excellent job of controlling clinical and pathological disease and reducing the severe economic costs of PCVAD, virus can still circulate in vaccinated populations (and can be demonstrated by PCR testing of saliva samples collected via cotton ropes). Given the adverse effects of the virus on the immune system, immune compromise can still occur and in high challenge situations secondary disease can still occur, necessitating additional therapy or pharmacological controls. Experience has shown that PCV2 vaccination of gilts prior to service can be associated with improvements in fertility and lower levels of mummification and is widely practised.

Due to the persistence of the virus and the difficulties of identifying disease free sources, elimination of PCVAD by total or partial depopulation is not feasible, although use of such procedures to remove complicating secondary disease can be highly rewarding. As such long term vaccination remains the control method of choice; farms that have withdrawn vaccine following cessation of disease have generally seen rapid degeneration of health necessitating a return to vaccination.