Neonatal diarrhoea (scour) is a common cause of loss in piglets soon after birth and yet nowadays is one of the easier disease problems faced by the pig farmer to control.  There is a range of causes but infection with the bacterium  E.coli causing colibacillosis remains one of the most common, particularly in gilt litters, especially but not exclusively in indoor farms. 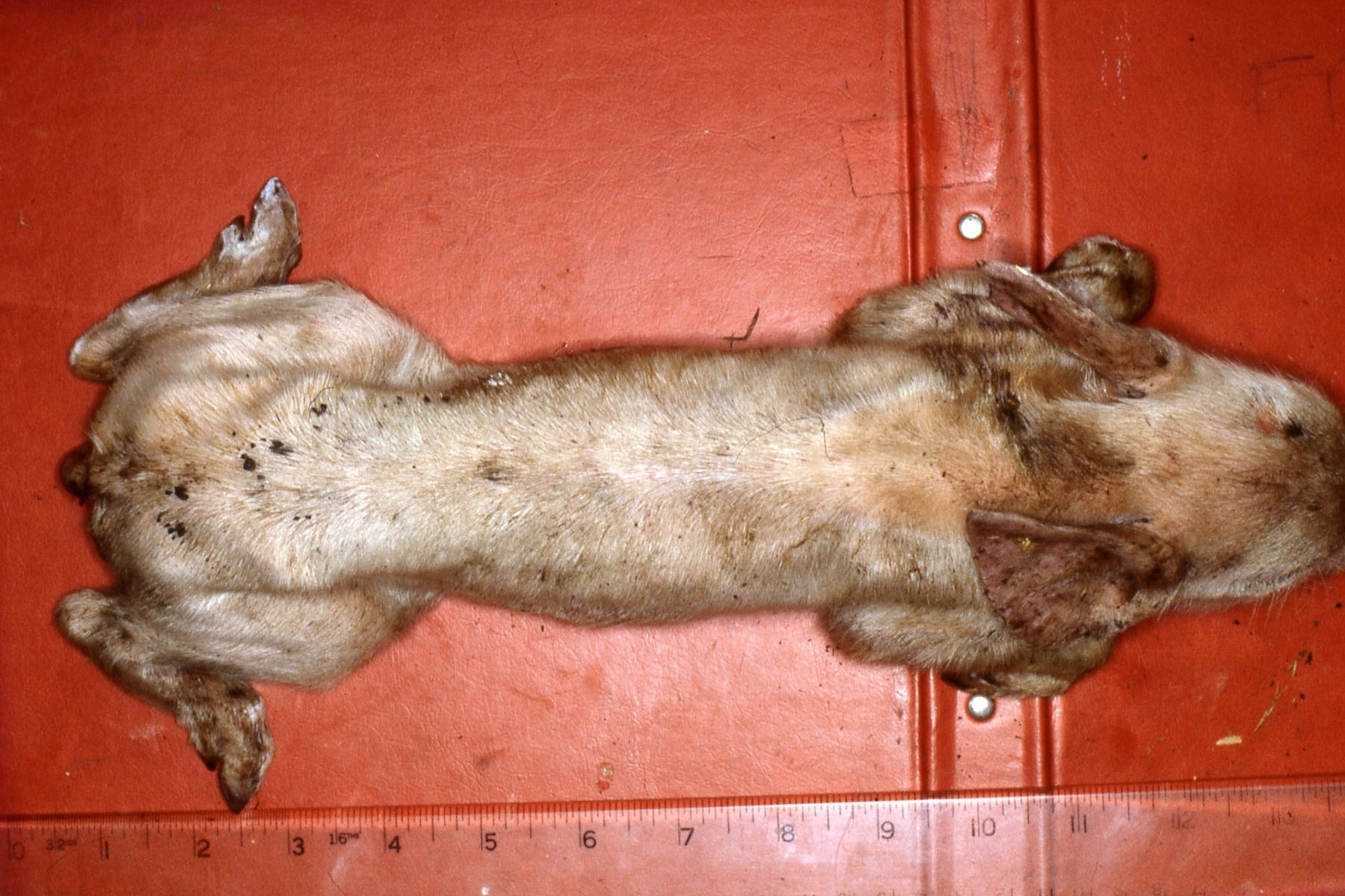 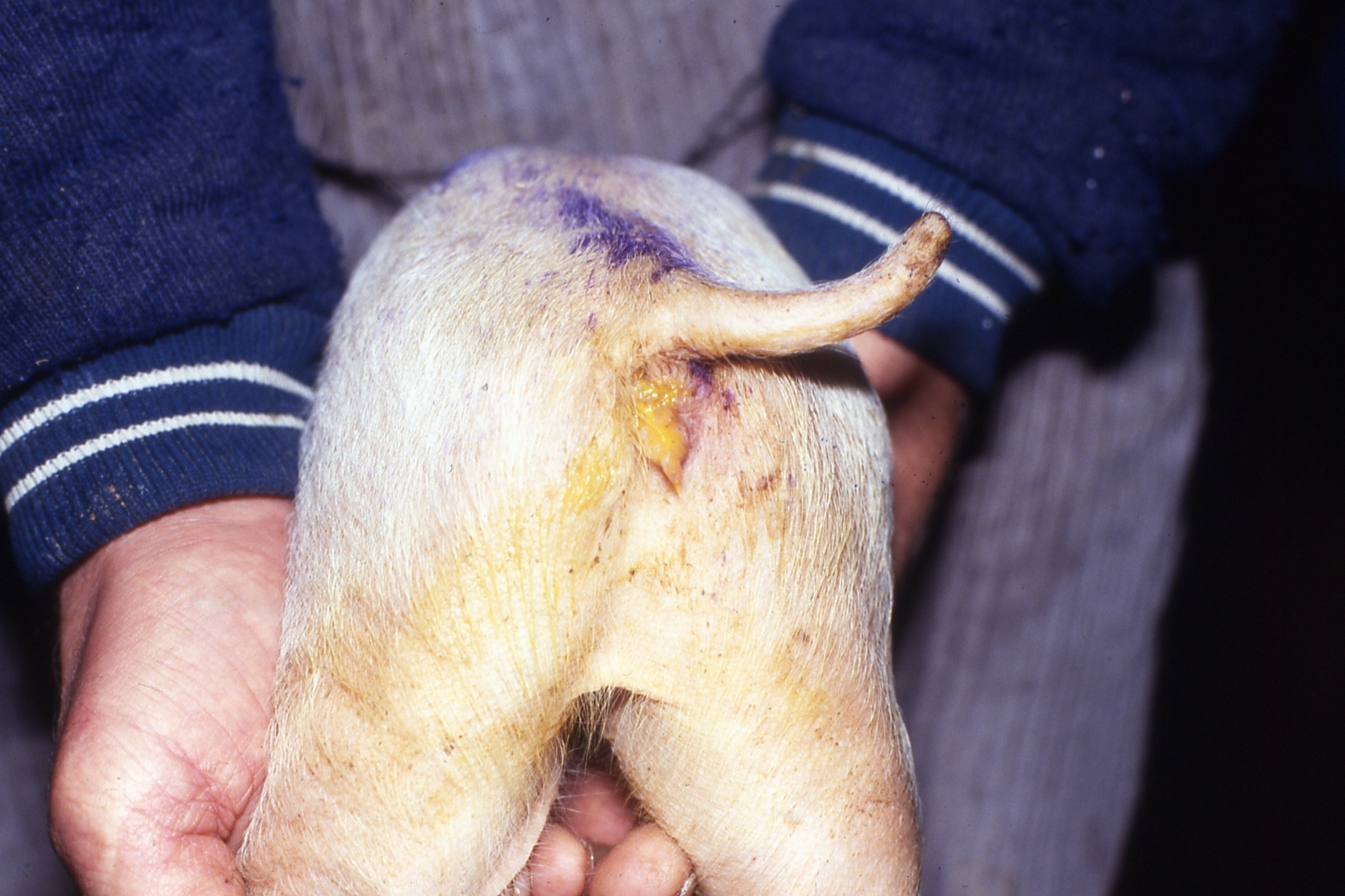 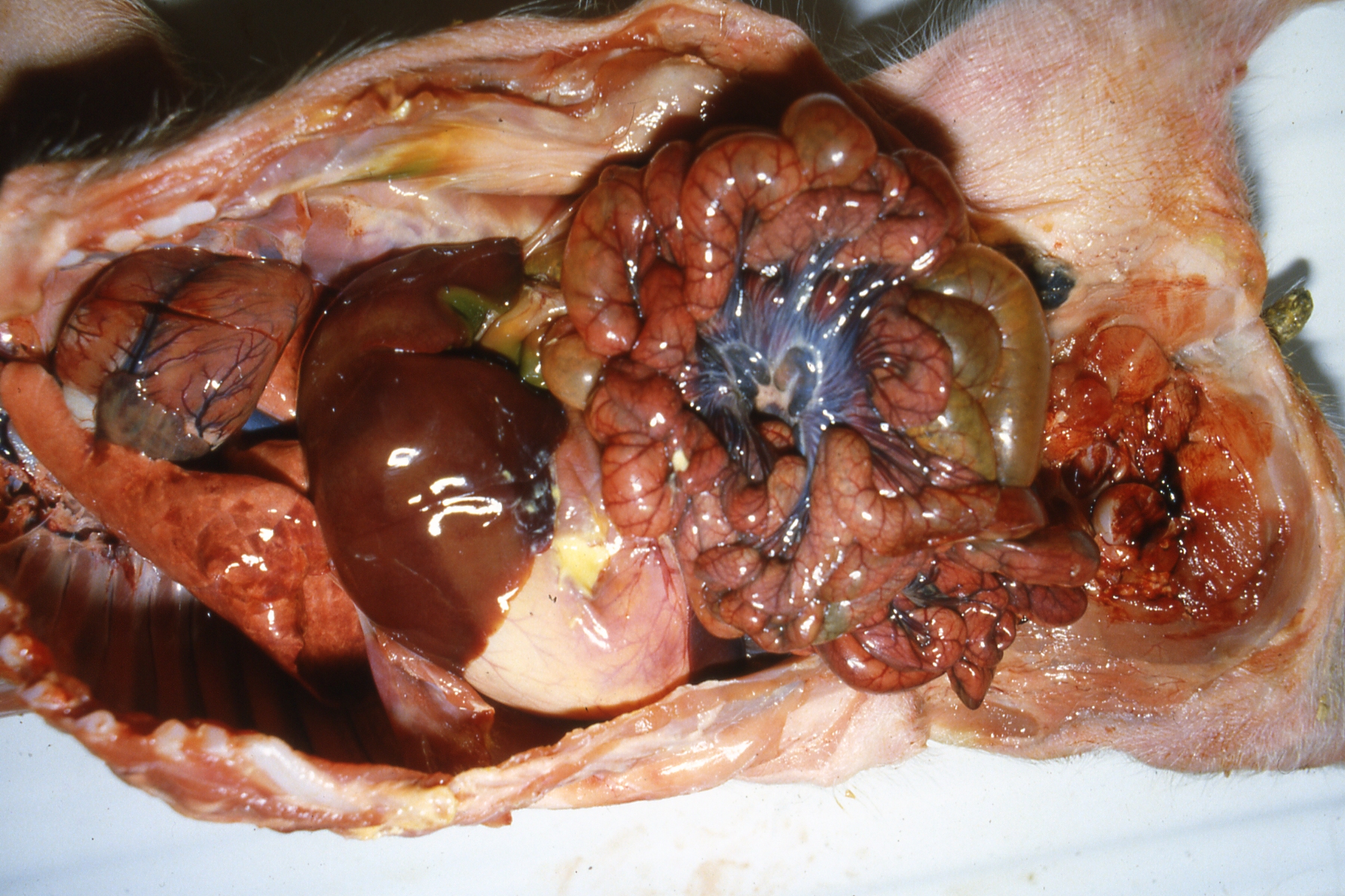 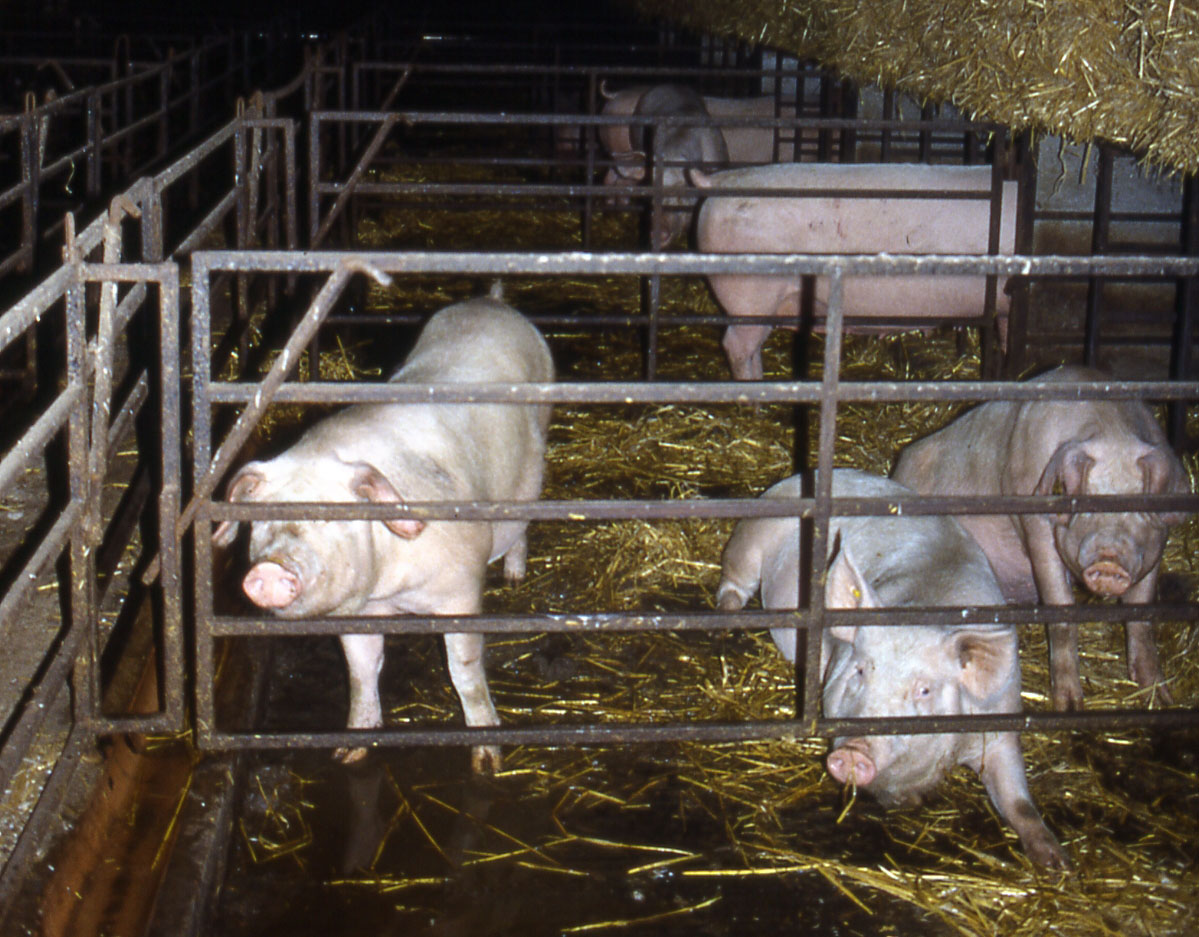 Fig 4: Vaccination of the gilt and sow prior to farrowing is a reliable method of preventing neonatal E.coli disease

E.coli bacteria are normally found in the gut of pigs (and most other mammals).  The excretion rate of E coli from the sow increases as she approaches farrowing and the three major sources of infection for the young piglet are:

Most strains of E coli are harmless.  However, there are strains that are extremely harmful to the piglet - most of which are classified as Haemolytic E coli (due to their growth characteristics in the laboratory).  Each strain is identified by number and in a few cases by name (e.g. Abbottstown).

The balance between the degree of exposure of the piglet at birth and the immunity conferred upon the piglet by the transfer of colostrum from mother will determine whether or not disease is seen.

The effect of these harmful strains of bacteria is to stick to the wall of the intestine and to produce a toxin (poison), which alters the function of the intestine such that there is a loss of fluid into the gut producing scour and dehydration.

It is possible but not essential for E coli to combine with other pathogens to cause disease, although this becomes more common in older pigs in the second week of life.

Neonatal E coli infection presents as a profuse watery scour within three days of age, with severe and rapid dehydration (fig 1). Vomiting is not typically seen. Death can occur rapidly - in some littermates before scour is actually evident. It will often, though not always, occur in whole litters and appear to spread from litter to litter within a house (fig 2).

At post mortem examination there will be inflammation of the small intestine with watery often yellow content.  Typically the stomach will be full of milk as the pig continues to suck (fig 3).  Diagnosis is confirmed on laboratory testing of gut contents or rectal swabs. Histopathology on affected gut tissue will confirm E. coli damage and differentiate other pathogens (e.g. Rotavirus) but can only be done on gut tissues fixed in formal saline within 10 minutes of death due to autodigestion post mortem.

N.B  E. coli is one of the few pathogenic agents affecting baby pigs that will easily be detected on rectal swabs.

Individual cases may be treated with an appropriate oral antibiotic - determined by sensitivity testing, given at the earliest sign of diarrhoea.  In an outbreak, strategic medication of all pigs at birth may be necessary.  Where one pig in a litter is noticed with diarrhoea it is usually appropriate and fully justifiable to treat the whole litter metaphylactically at that time.

Equally important as part of the treatment programme is the provision of electrolytes to reduce the severe dehydration that actually kills many piglets.  These must be kept clean and fresh, and in severely affected pigs be actively administered orally e.g. by syringe.

The principles of control revolve around:

Active cross-fostering of piglets is discouraged in the face of an outbreak, and on no account should pigs be moved from room to room, especially where there are age differences.

The farrowing pen in which a previous litter has been affected is a reservoir of infection if not thoroughly cleaned.  Cleaning should involve the use of detergents to remove the protective grease film (derived from high fat lactation and creep diets), power washing and disinfecting - using a DEFRA approved product at the appropriate dilution rate.  The longer the pens can be rested between batches the better.  Fumigation of rooms may be an additional technique to employ.  Removal of slurry from channels under slats reduces the risk of flies bringing infection back to the pen surface but if performed, must be thorough.

Cleanliness of the sow is also important.  The sow should, if grossly contaminated, be washed and dried before entry to a clean pen and she should not spend an excessively long time in the crate before farrowing - 3 to 5 days is preferable. Legally it cannot be more than 7 days.

In the outdoor environment, burning or removal of old beds, moving of farrowing arcs and avoidance of lying boards will all help control disease, subject to an exemption licence for the burning of bedding from the Environment Agency.

Immunity in the gilt and sow results from exposure to E coli regularly and continuously and can be raised by:

It should be appreciated that the injectable vaccines raise systemic immunity in the sow, which is spread to colostrum and transferred to piglets.  As such, they will only tend to protect the piglet in the first 3 to 4 days of life whilst that colstrum bathes the gut lumen, and are largely ineffective for controlling disease associated with E.coli infection in older piglets. (Specific piglet E coli vaccine is available for the control of E coli induced Bowel Oedema post weaning).

Combination vaccines covering Clostridia may be appropriate in some cases, especially in outdoor units.

All vaccines are only effective against the organism to which they are targeted - they will not cover every cause of disease - and rely upon ensuring adequate colostrum intake in every piglet early enough in life.

Long term treatment of piglets with broad spectrum antibiotics at birth to prevent E coli infection in young piglets is not an appropriate approach to take; not only does it increase the risk of selecting for antibiotic resistance but also can damage the development of the normal gut flora (microbiome) leading to digestive problems at and beyond weaning.

An acute outbreak of E.coli enteritis in baby pigs can have devastating consequences.  Over a one-month period, mortality due to scour can exceed 10% and surviving piglets can suffer 1kg loss in weaning weight with a consequent extension of days to slaughter of 10 days.  Thus, for a 500 sow unit over one month of an outbreak, the costs can exceed £5,000 in deaths plus £2,000 lost growth, in addition to treatment costs.