Lameness as a clinical entity presents a common problem to the pig both in terms of production/economics and its welfare.

Lameness can result from physical injury or abnormalities, or as the result of infection.

'Joint Ill' is commonly seen in the young pig resulting from opportunist bacterial infection of a wide range of agents (Streptococci, Staphylococci, Arcanobacter etc.) and typically results from inadequate colostrum intake. However, a polyarthritis - infection and inflammation of more than one joint - can occur in the older pig, in isolation or in combination with other lesions as a result of infection with Mycoplasma hyosynoviaeynoviae. 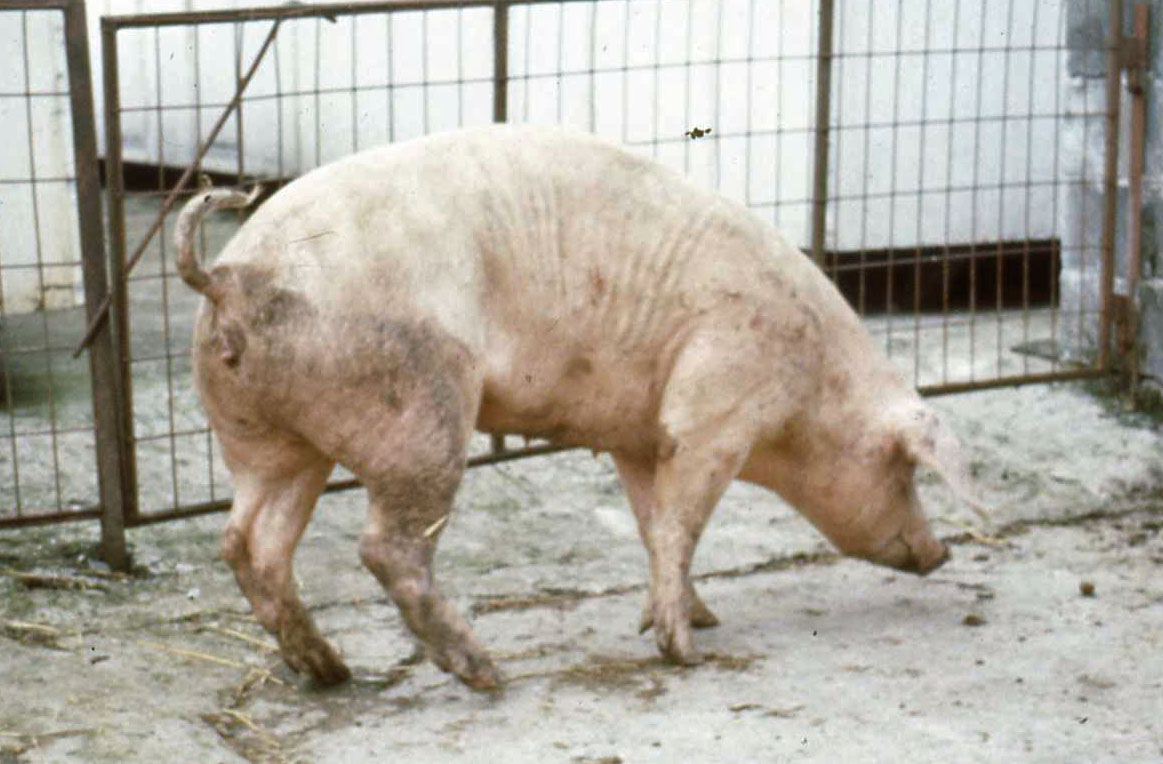 Fig 1: Clinical M hyos infection in a gilt can be clinically indistinguishable from osteochondrosis 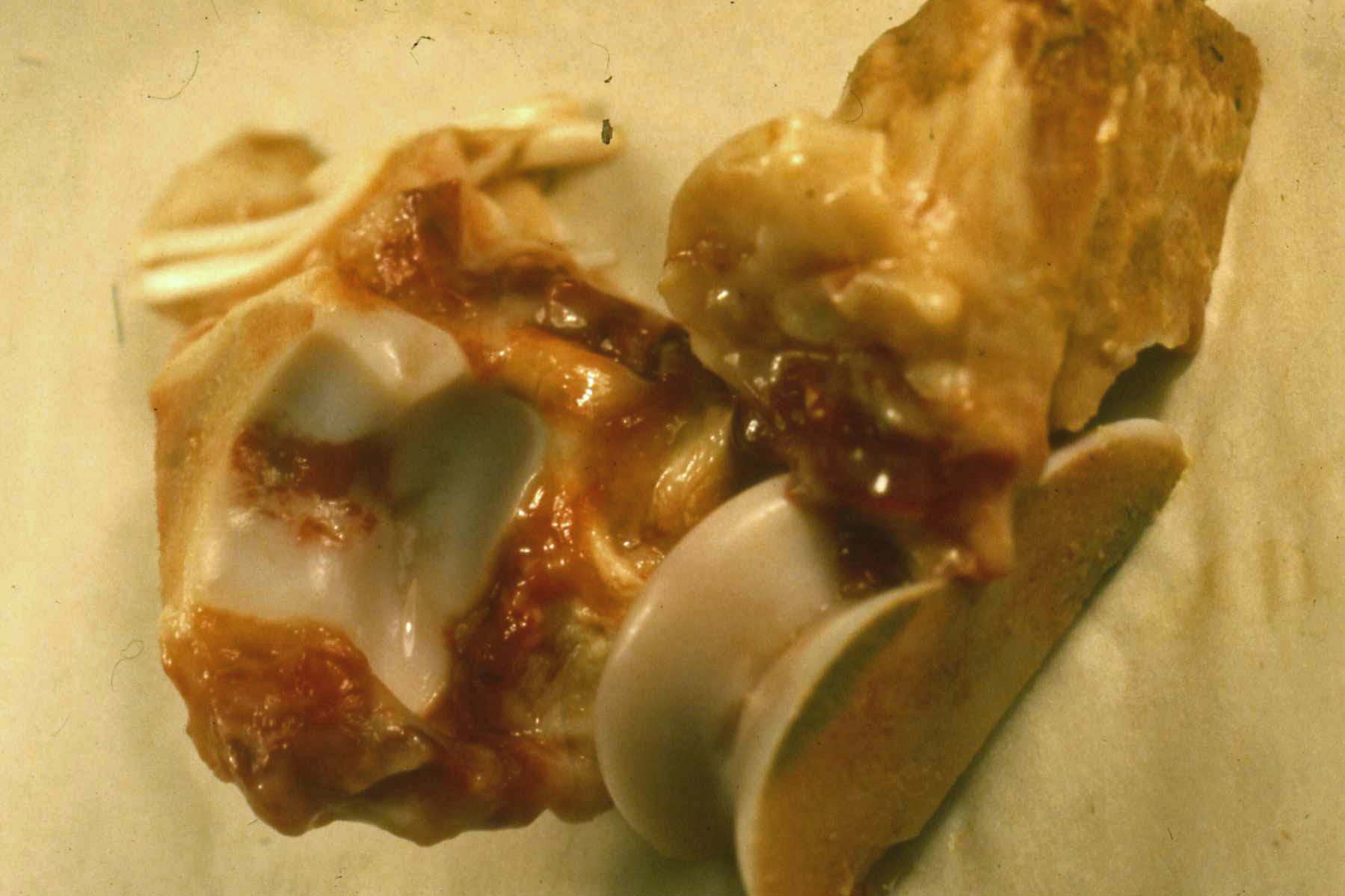 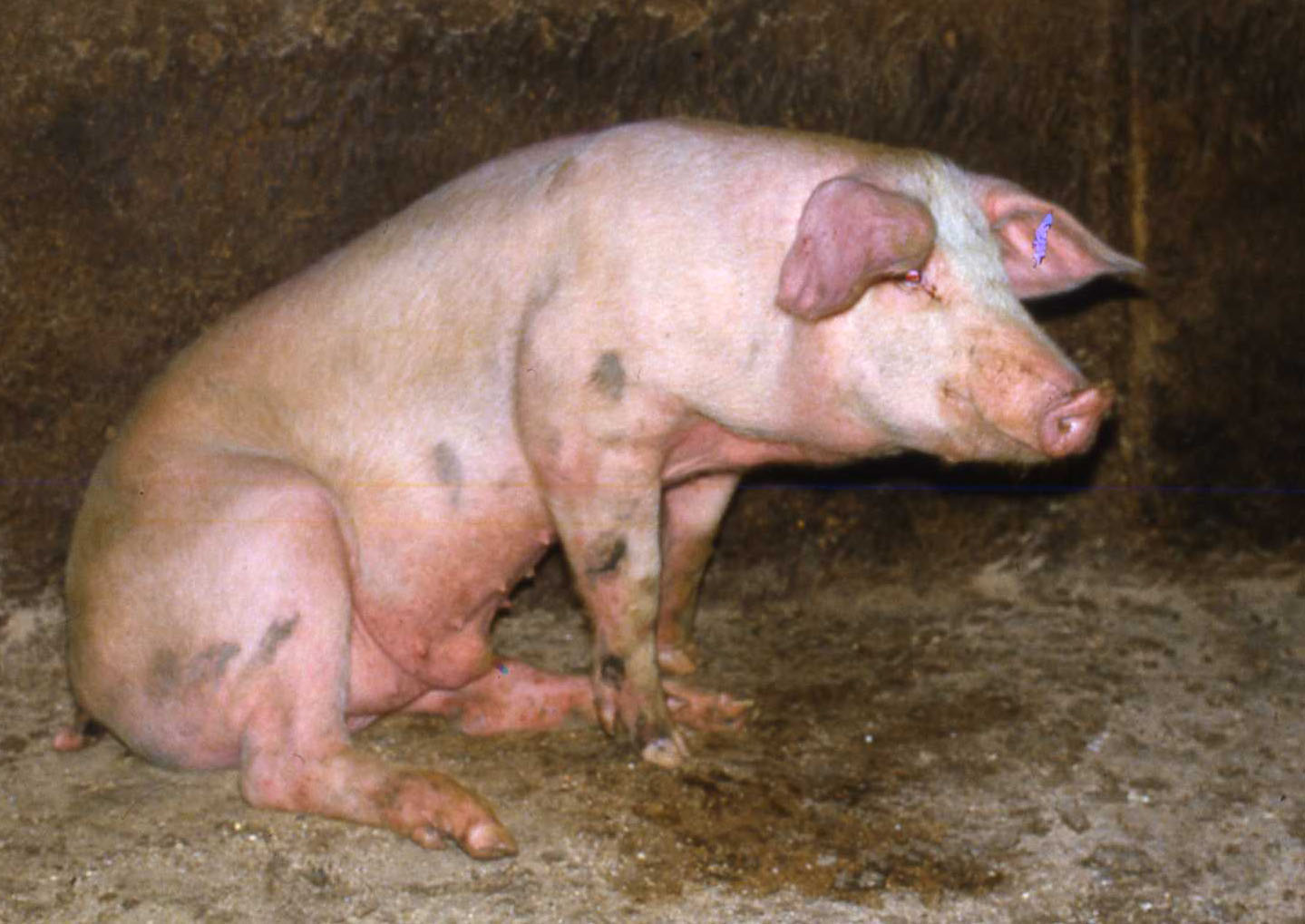 Fig 3: Growing pig 'off back legs' may be a sign of M hyos infection but must be differentiated from other conditions 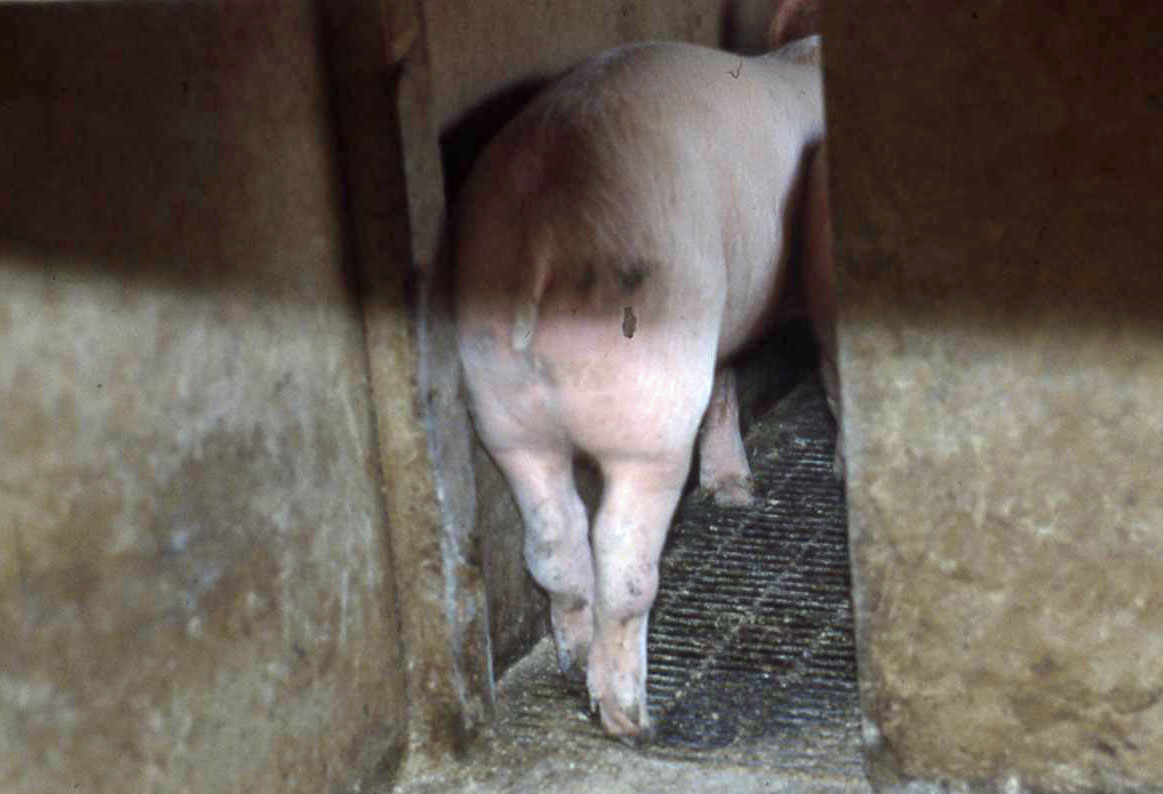 Fig 4: Adventitious bursae seen below and behind the hock of a store pig can be infected with M hyos.

Mycoplasma hyosynoviaeynoviae is a small fragile bacteria-like organism that is widespread within pig populations and is spread easily in infected pigs by aerosol and by transfer of faeces.  It is possible that it can spread on the wind between farms.

Two other Mycoplasmas are commonly seen in the pig - Mycoplasma hyopneumoniae - the cause of Enzootic Pneumonia (SEP) in pigs - and the ubiquitous but less frequently diagnosed Mycoplasma hyorhinis, which can cause respiratory disease and occasional lameness.

It should be noted that these 3 agents are distinct with no known cross-immunity.  This, therefore, means that the widespread use of M. hyopneumoniae vaccines to control Enzootic pneumonia will have no protective effect against M. hyosynoviae infection and subsequent arthritis.  No vaccines are available for the other two Mycoplasmas.

M. hyosynoviae lives on the tonsils of many pigs and can get into the body and circulate in the bloodstream before settling into joints.  It is also believed to be excreted in breath, saliva and faeces.  It will spread rapidly between pigs but only a proportion will demonstrate clinical disease.

The clinical presentation of Mycoplasma arthritis tends to vary with age and severity of infection.

In younger growing pigs - typically 10 weeks old and above - lameness will be of sudden onset and within a group can range from partial lameness on a single limb, through posterior recumbency ("off back legs") to extreme cases of complete recumbency and inability to stand due to pain in swollen joints.

The other group of pigs particularly vulnerable to M. hyosynoviae arthritis is young adult breeding stock, and in particular replacement gilts recently arrived on the farm.

(Except in the case of a totally naïve population that breaks down with infection, which is extremely rare, disease is not seen in mature animals.)

In young adults the disease will present more likely as a partial lameness with limping or shifting gait.  However, severely affected animals may 'dog sit' and only rise with assistance.

Lameness tends to be more obvious in hind limbs but infection can occur in any joints in any limbs.

If lower leg joints are affected, particularly the hock, then a visible soft fluid swelling may be felt. Swollen adventitious superficial bursae (caused primarily by trauma or pressure over bony prominences) may also be infected although this is likely to be of little clinical significance

Typically the affected pig will not have a raised temperature, although in severely affected cases a small rise in temperature may be recorded (up to 40°C), probably the result of pain.

In growing pigs, the disease is seen in solid floor yarded systems and scrape through dung systems.  It is extremely rare in slatted accommodation.

In continually occupied scrape through buildings the disease will develop and spread to younger pigs, creating a continual cycle of disease.  The survival of the organism is remarkably good, living up to 4 weeks when dry and longer in wet conditions.

Blood tests taken from young pigs prior to development of disease in a high risk situation often show positive results, suggesting that a serologically positive animal is not necessarily protected.

Clinical disease is seen more commonly in gilts than boars, particularly above 75-80kg.  It can only be speculated that the hormonal changes that are occurring in the post-pubertal gilt precipitate disease.  It is often more common in winter or following a sudden temperature drop.

Some clinical cases can resolve spontaneously within a few days, but in most cases a failure to treat will lead to chronic lameness that ultimately requires euthanasia, or if appropriate, humane slaughter.

Animals that fail to respond to treatment - particularly replacement gilts - can often be found, on post mortem examination, to be suffering from osteochondrosis in addition to Mycoplasma infection.  (This is a degenerative joint disease of complex aetiology and if significant requires a 'lifetime' approach to management, housing and nutrition.)

The disease can be suspected on the grounds of sudden onset lameness in many animals, particularly if they have recently been moved, either within the farm or as recently delivered animals.

With difficulty, the organism can be grown from affected joints of untreated pigs but diagnosis would usually be achieved by demonstrating a rising titre of antibodies in blood samples over a 2-3 week period following onset of disease.  A mild synovitis may be seen in affected joints post mortem.

The disease needs to be differentiated from uncomplicated osteochondrosis, Erysipelas arthritis and a wide range of nutritional and toxic conditions that occur occasionally, if rarely, in growing pigs. In particular, pantothenic acid deficiency and ionophore toxicity can both produce recumbency and dog sitting without significantly raised temperatures in groups of pigs.

A number of antimycoplasma therapies are available and the acutely affected individual requires treatment for 3-5 days.

Tiamulin, lincomycin and tylosin all appear to achieve sufficient penetration of the joints to give a satisfactory response.  Perhaps the greatest failing of treatment is that an animal is treated for 1 or 2 days with spectacular results only to relapse a week or so later.  This is the result of inadequate clearance of the organism or reinfection from a heavily infected environment.

Where large numbers of animals are affected, metaphylactic medication via water - or less appropriately feed - is indicated, but always remember that severely affected pigs may have difficulty either reaching or competing for feed or water.  In such cases, the pig should be isolated in hospital accommodation and individually treated and supported.

The disease results from a combination of excessive challenge with infection, and stress that results from moving/mixing.

To reduce the incidence of disease in growing pigs in known 'at risk' environments, efforts must be made to improve hygiene by emptying buildings, washing, disinfecting and if possible lime washing of floors.  Earth floors in barns are particularly difficult and should be avoided.

Where the disease is predictable i.e. soon after a move of building or following delivery of replacement gilts, strategic medication can be applied to prevent development of the condition.  Any of the previously listed antibiotics can be used, as can tetracyclines, but it must be noted that the poor penetration of this class of antibiotics to joints makes them ineffective for treatment of affected cases. Such approaches should be short term solutions with hygiene and thermal comfort improvements needed to reduce risks.

There is little published data on the cost of M. hyosynoviae to pigs.  Probably the most significant costs are;

M. hyosynoviae arthritis is a sporadic disease that can become ingrained within a pig keeping system and cause welfare and production problems.

Where appropriate strategic prophylactic medication can be applied and attention to hygiene will reduce the prevalence of the disease.

Vaccination is not available.