Infertility in sows can result from a wide range of causes, both of an infectious and non-infectious nature.  The latter includes management factors, nutrition and environment.  Disease can play a role, although in the UK many of the specific reproductive diseases either have never occurred or have been eradicated e.g. Brucella suis, Aujeszky's Disease.

PRRS, Parvovirus (PPV) and the vaginitis/endometritis (discharge) syndrome - associated with vaginal contamination at or around service -  have probably been the most frequent infectious causes of infertility in this country although changes in management systems - particularly the removal of stalls and tethers at the end of the 20th century - have coincided with a marked reduction in the latter.  Effective vaccination programmes have seen a marked reduction in PPV and to some extent PRRS, whilst an increasing use of artificial insemination in the pig herd has reduced the spread of both specific and non-specific venereal infection.

However, failures of conception leading to regular and irregular returns and later problems in pregnancy relating to mummification, abortion and poor quality of pigs born remain major features on many breeding pig units and whilst management is often the primary culprit, in many cases other infectious diseases may be implicated.  Porcine Circovirus type II has become enzootic throughout the UK pig population and has been linked with reproductive failure in gilts and sows producing a SMEDI like syndrome similar to PPV.  However, there remains considerable uncertainty as to its actual significance in the field.  Other primary infectious agents that have implicated in reproductive disease are Leptospira and Chlamydophila. 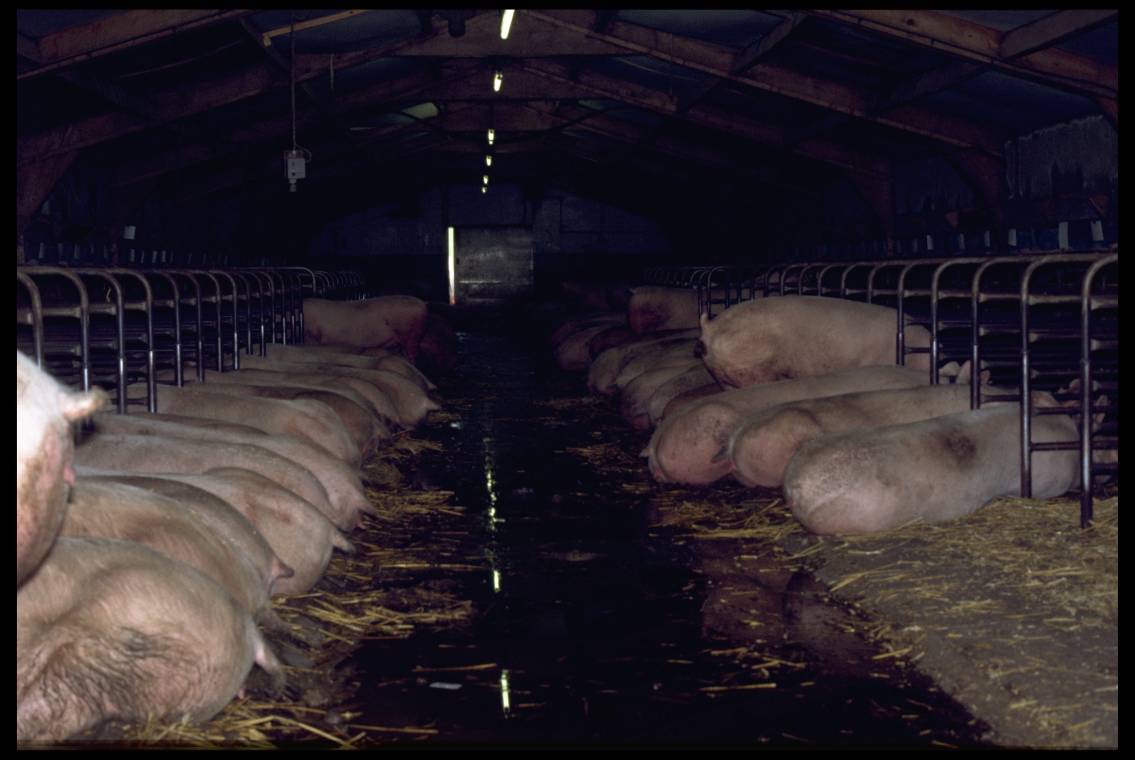 Leptospiras are spiral bacteria, which are associated with a wide range of diseases in many species.  One of the best known is L.icterohaemorrhagiae, the cause of Weils Disease in man, which is primarily carried by rats and can be seen as a systemic disease in young pigs, albeit sporadically. The dog Lepto - L canicola - can cause sporadic septicaemic disease in young piglets

L.pomona is a specific, severe cause of reproductive loss in pigs (including abortion) but has never been diagnosed in the UK.  In this country, L.bratislava (part of the Australis gp) may be the cause of a specific disease pattern in sows but, unfortunately, tends to be used as a bucket diagnosis for reproductive failure, frequently without any diagnostic backup.

L.bratislava is not associated with illness in pigs, its effects being restricted to reproductive damage. 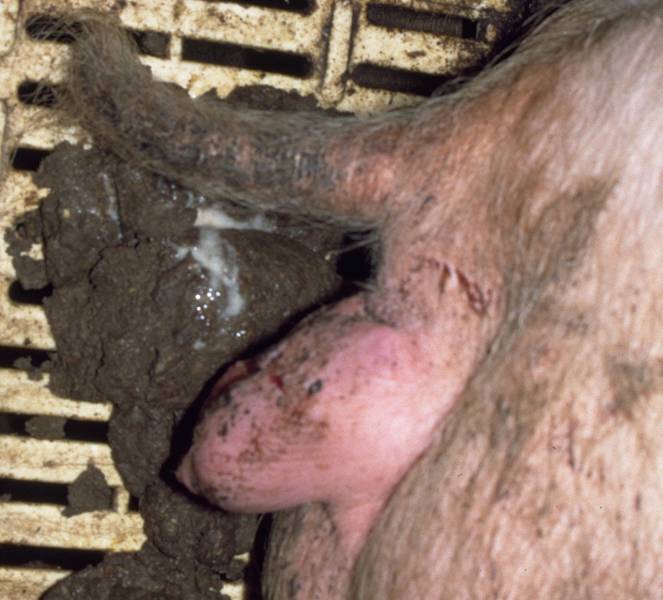 The signs seen can include:-

1) An elevation in returns to service both at regular 3 week intervals and at abnormal times (e.g. 28-35 days post service).

2) Mucopurulent discharges may occur 2-3 days before the sow demonstrates a return to oestrous.

5) Where confirmed cases do occur, they are frequently seen in established herds affecting gilts only, suggesting that sows have some immunity.  L. bratislava may occasionally be implicated in herd infertility outbreaks affecting all ages of sows that last no more than a single herd cycle of five months.

6) Some veterinarians and producers believe that L. bratislava can be the cause of long term cyclical infertility problems within herds but the definitive evidence to support such a belief id frequently lacking. 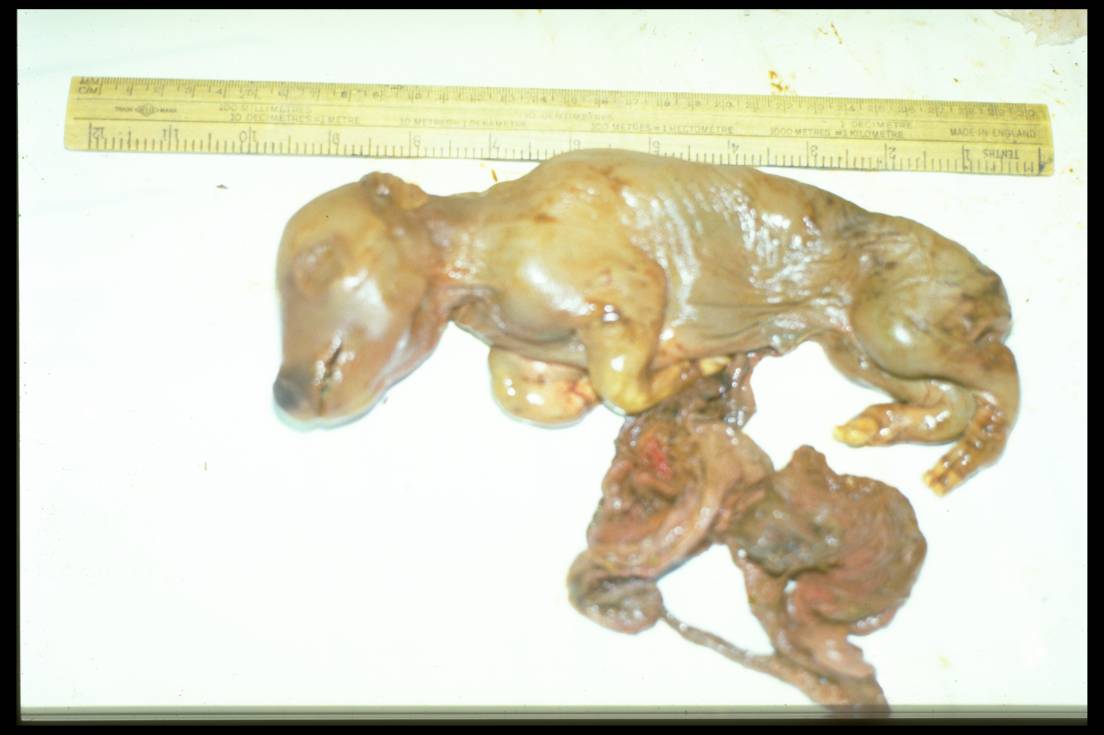 Fig 3 Late mummification can be a feature of Leptospira (1:6)

Confirmatory diagnosis is difficult to achieve.  Demonstration of the organisms by fluorescent antibody test (FAT) in aborted material or in the reproductive organs of culled sows provides strong evidence of its involvement.  Serology is confusing.  Where a recent infection has occurred, the MA titres will rise dramatically (into the thousands) but will fall rapidly (within weeks).

It is common practice to blood sample a herd suffering reproductive failure and find titres of 1:50, 1:100 or even 1:200 in some animals.  It is very dangerous to assume any significance in such results.  Low level titres may be present in the normal herd and there is some degree of cross reaction with the many other serotypes present in and around the pig farm, particularly in rodents and other wildlife (hedgehogs, foxes, badgers etc) to which obviously the outdoor herd is frequently exposed.

Caution should therefore be applied to interpreting serology:

Despite a commonly held view, there is no evidence that L.bratislava has a seasonal incidence appearing in the spring and autumn.  This belief seems to have arisen simply because such a pattern is seen in cattle affected with a totally different serotype - L.hardjo.

Where the disease is confirmed, herd treatment with antibiotics is appropriate.  This can take the form of:

1) Blanket herd injection as a single or double treatment with streptomycin.

2) Injection of sows/gilts at service with streptomycin or potentiated sulphonamides.

3) In feed medication with tetracyclines, although dose rate is important.  A dose of at least 10mg/kg liveweight is needed and for large sows on low feed levels, this can require, for example, 10kg per tonne of 10% chlortetracycline premix.  Medication is needed from weaning until up to one-month post service, although in practice it is often only practical to treat the whole herd for a full sow cycle (five months). In the interests of responsible use of antibiotics this regime should only be pursued based on sufficient evidence of the disease; the old idea of treating the sow herd routinely say every 6mths for 1month is now regarded as inappropriate.

4) Regular treatment of boars (e.g. every 6 weeks) with streptomycin injection.   Use of preputial infusion using intramamary preparations off licence into the boars has been widely used historically but is of dubious value.

Over the years many herds have seen a positive response in sow fertility following the inclusion of feed medication from weaning through to the post service period. Whilst this may be the result of control of Leptospira, in some cases it is not diagnostic.  Such responses may occur as a more general effect of improved vaginal hygiene, by controlling other undistinguishable pathogens (e.g. Chlamydophilia) or purely by coincidence.

On an individual basis, chronically infertile sows (i.e. "double repeats") are best culled both on economic grounds and as potential disease carriers.

All treatments must be done under the direction of a veterinary surgeon with strict observations of dosage rates and withdrawal period.

No vaccines are currently available in the UK to control L.bratislava, although they are available in Europe and can be imported by a veterinary surgeon under a Special Import Certificate. (Farrow Sure B: Zoetis) Some UK based veterinary surgeons are strong believers in using such vaccines which combine cover for multiple Leptospira species with Erysipelas and PPV.  (Leptospira pomona vaccination is widely used in Australia and New Zealand where this disease is of major significance.)

Other species can act as a reservoir of infection for pigs (e.g. rats and hedgehogs) but it must be remembered that the rats are not the primary source - pigs are.  Rodent control should be a priority in and around all pig farms.  The inevitable contact between outdoor pigs and hedgehog environments does create a risk of infection.

Attention to hygiene in service areas is vital, requiring regular washing and disinfection.  In outdoor units, care is needed with wallows that harbour infection.

There is some circumstantial evidence that venereal spread is a major part of the development of the disease and the exclusive use of AI is likely to be of benefit.

It is virtually impossible to state a specific cost of Leptospira infection in a herd.  In confirmed outbreaks the following losses have been documented:

The use of feed medication in breeding rations has often been applied to try and improve fertility but where used at the correct dose will add more than £30 to the cost of the diet and used over a sow cycle will add costs of £15 per sow - a not insignificant cost if no response occurs.

For this reason and to comply with the general principles of responsible use of antibiotics in animals, medication of breeding sows for "fertility" reasons should only be undertaken where there is good evidence that sensitive infectious agents are implicated.

Leptospirosis in pigs is clinically over-diagnosed in the UK sows.  Whilst it may be the cause of specific episodes of reproductive failure and can be implicated in long term herd infertility problems in gilts, it is wrong to assume that it is the cause of all episodes of infertility with a knee jerk reaction to reach for medication.