The condition commonly referred to as "joint ill" is more correctly an arthritis affecting one or more joints, usually in young pigs.

It is a condition seen in the young of most species and results from infection gaining entry to the blood stream at or soon after birth, circulating around the body and then settling out in the joints or occasionally in other parts of the body, particularly the brain causing meningitis.

Disease tends to occur either as a sporadic disease of individuals that grumbles along in herds or as an outbreak (particularly with Strep suis type 14).  The sporadic/grumbling disease is rarely seen in outdoor situations but outbreaks of S suis type 14 do occur in all farrowing systems. 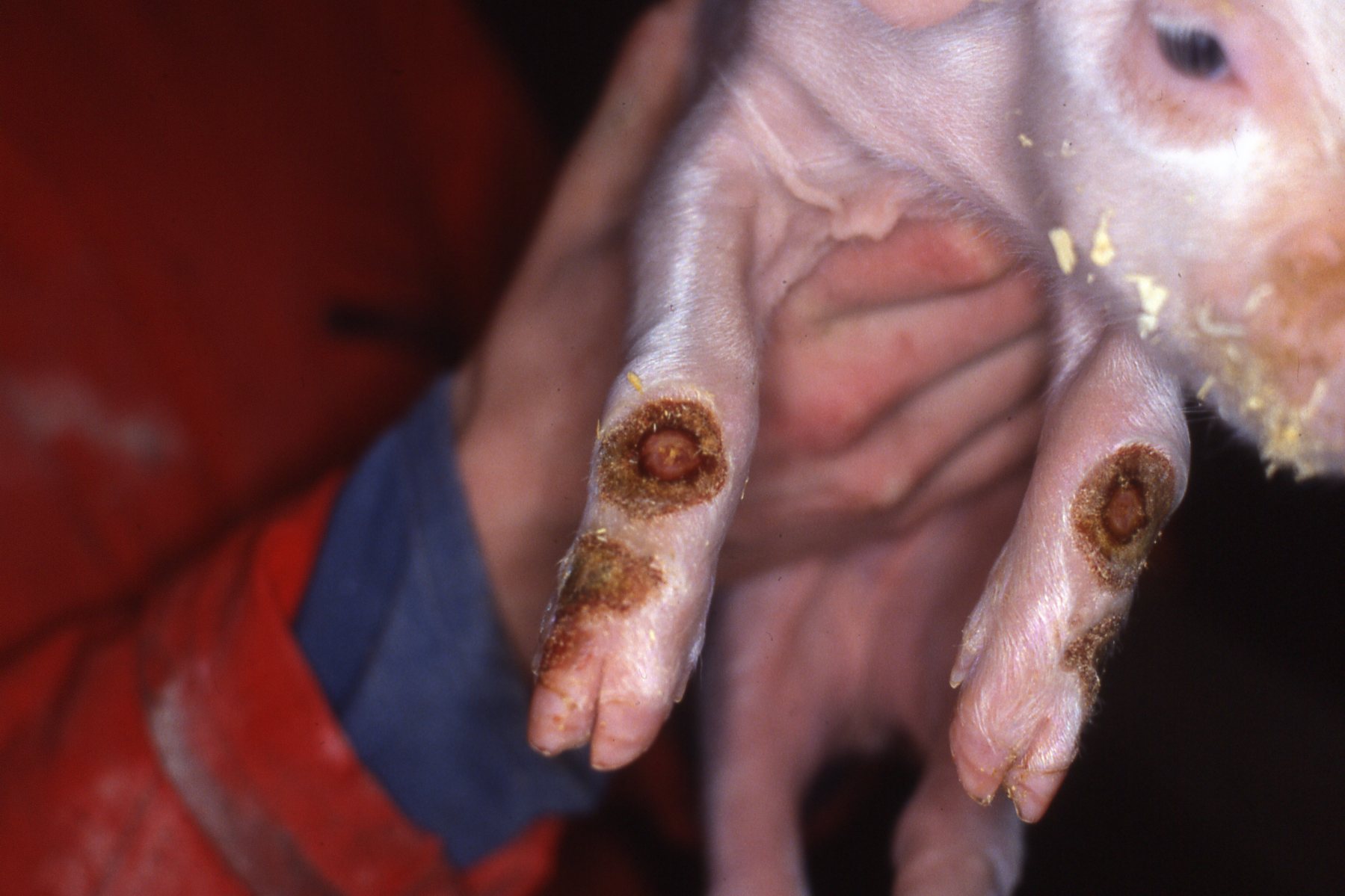 Fig 1. Abrasion of the lower leg can lead to secondary joint infection. 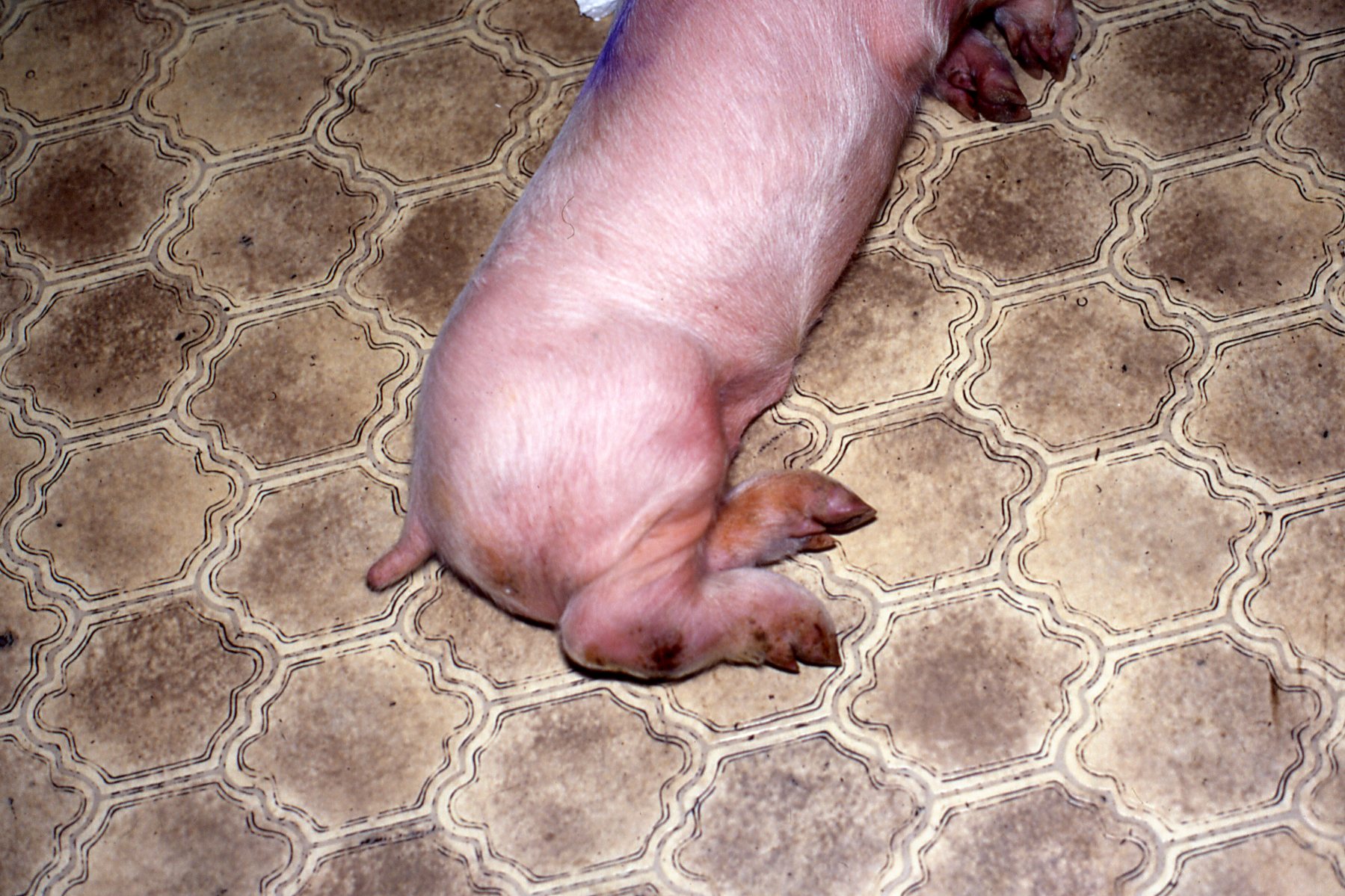 Fig 2. Inability to stand in a 2-week-old piglet with joint ill. 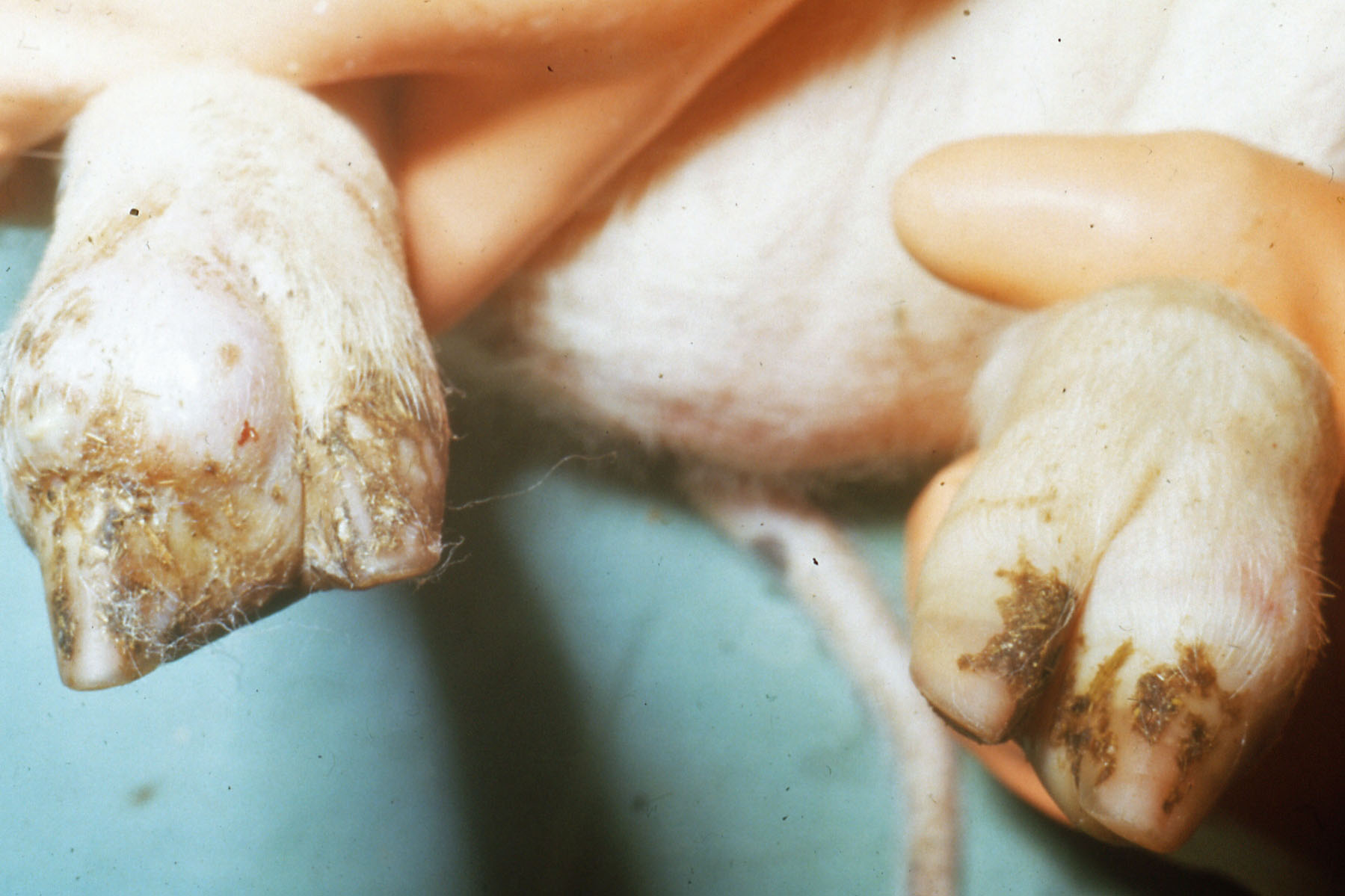 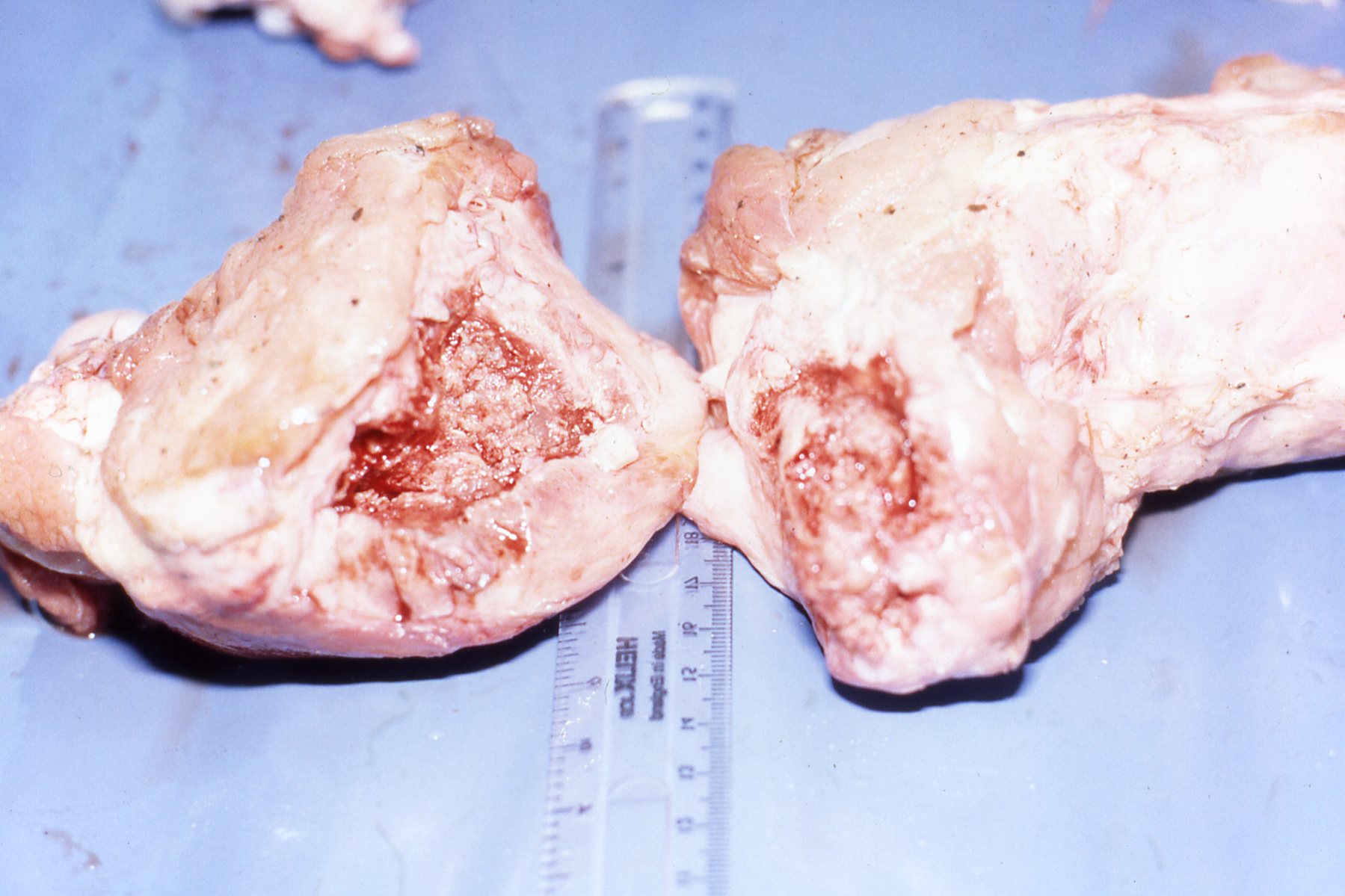 The cause of joint ill is bacterial infection of the piglet, pre-weaning.  The majority of cases are caused by opportunist infection from the environment with, for example, E coli, Staphylococci and Streptococci.  There are specific infectious agents that can produce outbreaks of joint ill (and meningitis) such as Strep suis type 14.

There are a number of possible routes by which the bacteria can gain access to the blood stream and, hence, spread to the joints:-

3) Through contamination of a docked tail stump

5) Through the tonsil of the piglet (especially Strep suis)

6) Where performed through castration wounds

The first signs usually seen will be a piglet carrying a leg or reluctant to stand.  Some may "dog sit" (Fig 2).  As the pigs' ability to compete for a teat is compromised, loss of condition and starvation will occur.  Crushing due to overlaying is a common sequel. The initial joint ill can occur within the first two days of life.

It is often the case that visible and palpable swelling of specific joints occurs later and, when evident, the hock and knee are most commonly affected, simply because they are easily visible and not buried in muscle.

Without treatment the infection will persist and, in severe cases, the abcessation resulting will burst out from the joint.

In outbreaks of Strep suis type 14 (and other epidemic forms of Streptococcal arthritis in piglets) most major joints of the legs can be affected such that the piglet presents in recumbency, often twitching.  The intense pain that occurs often leads to an assumption that the pig is suffering from meningitis - which is an uncommon complication. This form of joint ill is most often seen from 10-14 days of age.

Cases of arthritis can be seen post weaning, either as a delayed manifestation of earlier infection or resulting from inadequate treatment of an earlier case.

In addition to enclosed joints becoming infected and swollen, foot lesions in the young piglet are also common.  These usually result from cracking or abrasion of the contact surface of the claw - due to floor damage - with opportunist bacteria gaining entry to the wound, infecting the inner tissues of the toe (laminae) and from there spread into the local joints.  If untreated, eventually the infection will break out above the claw as a weeping abscess. (Fig 3.)

Early individual antimicrobial treatment is essential if a recovery is to be made.  The medication used should be tailored to the needs of the farm and laboratory testing of the cause(s) may help.  In general, penicillin, ampicillin or lincomycin are likely to be effective.  Use of pain killers (e.g. ketoprofen, meloxicam) may also be indicated as this condition can be very painful. Fluoroquinolones and 3rd/4th generation cephalosporins such as ceftiofur should only be used as a last resort where other treatments have failed and laboratory tests support their use over the short term.

Failure to respond and evidence of burst abscesses from joints should lead to euthanasia.

In rare cases, an early problem with joint ill can infect the end of the bone and affect the growth plates with the result that later in life (e.g. at 3 months) spontaneous fractures occur. Fig 4. This condition is particularly seen in association with S suis type 14 infection.

The key to controlling joint ill is firstly to improve hygiene in the farrowing area and secondly to identify and rectify the route of entry of infection.

Teeth should be clipped singly with clean sharp clippers or ground off to avoid shattering of the teeth.  Some producers stop teeth clipping in the face of joint ill problems but it must be remembered that the fighting damage that results can itself lead to joint ill!  Teeth clipping itself does not cause joint ill; bad teeth clipping does. Clippers should be replaced regularly and kept clean.  Ideally, dip in alcohol (surgical spirit) between piglets.  It is against the law to clip teeth of pigs routinely - only under veterinary direction. Where performed, avoid clipping until the piglet is at least six hours old as early clipping can interfere with colostrum intake. An alternative to clipping is to grind the sharp tips off the eye teeth using a mini-grinder. Clinical experience may suggest that joint ill is less likely to occur compared to clipping

Always use separate instruments from those used to clip teeth.  Ideally, use thermocautery.  Tail stumps can be dipped or sprayed with iodine immediately after docking. Routine docking is also illegal and should only be performed under veterinary direction where there is evidence to suggest that a failure of docking will lead to unacceptable tail biting.

Navels should be dipped in iodine at birth - spraying is inadequate as it usually misses the broken end of the cord.

Use of dry disinfectants in the farrowing pens can help but is not a substitute for a failure to wash and disinfect or to keep the pen clear of sow faeces. Proper thorough washing and disinfection of farrowing pens between groups is essential and due to the high fat content of lactation diets and baby piglet creep feed, detergents are necessary as part of the washing process to remove the film of fat which will act to protect bacteria from disinfection.  Do not allow sows to spend more than 5 days in the farrowing crate before farrowing. In outdoor situations move arcs to clean ground within the paddock and remove old bedding.  Avoid wooden floors in arcs.

White-washing of farrowing pens with hydrated lime following routine cleaning will dramatically improve the standard of disinfection particularly on old worn out floors and wooden partitions.  A thick emulsion must be applied but it is vital that pens are left unoccupied for 4 days after treatment to allow the lime to 'cure'.  Failure to do this will lead to scalding and ulceration of the sow or even the piglets if exposed immediately. This process is generally only applicable where flooring is solid.

Where tonsillar penetration is suspected, and in particular with Strep suis type 14 infection, prevention can be achieved by:-

a) Routine treatment of piglets at birth with long acting penicillin or amoxycillin.

b) Treatment of the sows in the farrowing area with appropriate antibiotics, either by inclusion in the feed or use of long-acting antibiotics prior to farrowing.

The long-term use of antibiotics at birth is to be avoided, as this is likely to lead to the development of resistance in bacteria on the farms. Routine treatment of piglets at birth should not be a substitute for husbandry errors. Furthermore, the use of routine broad spectrum antibiotics in pigs can have a dramatic , deleterious and long lasting effect on the developing microbiome of the piglet - intestinal and upper respiratory - and this can affect growth and subsequent health.

Early intake of colostrum is critical to protect piglets against all infections.

Consult your veterinary surgeon, who will design the most appropriate control programme.

Replace or repair worn floors, especially old concrete.  Where slats are used, ensure they are in good state of repair and with gaps that are appropriate to the size of the piglets' feet - avoiding entrapment.  The use of deep bedding will minimise abrasion but where this is not possible the use of old carpet as protection for the piglets legs in the first 24 hours of life can be beneficial.  It is likely to need replacement between litters. Shredded paper can be used as a bedding material in fully slatted systems without compromising slurry management.

Outbreaks of Strep suis type 14 have affected over 50% of piglets with 10% of these (i.e. 5% of the total population) dying as a result of starvation, overlying, septicaemia or euthanasia. Primary outbreaks, as were common in the 1990's, could last three months.

Valuing a weaned piglet at £50 (anticipated income from sale of a bacon pig minus saved feed cost) the shortfall for a 500 sow breeder/feeder farm would be up to 150 piglets, or £7500, plus the costs of medicine and labour to treat and control.

In the more chronic herd situation where a grumbling level of joint ill is present all the time, problem herds can experience a 5% incidence of joint ill with an associated 1.5% increase in mortality.  In addition to the costs of treatment, the 500 sow farm would lose up to 200 pigs per year due to this condition - an ongoing drain of £10,000 per year.