Ileitis and Proliferative Enteropathies in Pigs

During the 1960's, as the UK pig industry moved into a new phase of intensification of production and control of long-standing infectious diseases such as Classical Swine Fever and Swine Dysentery, clinical reports were appearing of a new condition in growing pigs and replacement breeding stock, particularly but not exclusively of high health status, in which death could occur suddenly associated with massive intestinal haemorrhage in the lower small intestine and into the upper sections of the large intestine. Research through the 1970's linked these acute intestinal catastrophes with adenomatosis, a thickening of the gut wall in younger animals, and other occasional gut pathology. However, it was not until the mid 1990's that the cause of what have been termed proliferative enteropathies (PE) was identified.

Extensive investigation over several decades at Edinburgh, under the leadership of Gordon Lawson and Alan Rowlands, led to the discovery and characterisation of a novel bacterial species causing this range of clinical disease. The bacteria, now call Lawsonia intracellularis, adheres to the surface of local intestinal cells especially in the ileum (lower small intestine) before penetrating the cell wall, altering cell function, and replicating to produce various forms of pathology. The bacteria will then be shed in faeces as the natural turnover of intestinal cells occurs although, unlike many intestinal bacteria, Lawsonia is not capable of reproducing outside the cell - acting more like a virus. It thus proves difficult to culture and identify in the laboratory by standard bacteriological techniques.

Since its discovery the organism has been shown to infect a wide range of mammalian and avian species (hamsters, horses, rabbits, ferrets, foxes, ostriches and primates) and cause varying enteric disease in most.

Serological (ELISA) studies on finishing pigs in the UK have shown that Lawsonia infection in pig herds is almost ubiquitous even or especially in herds set up by caesarean rederivation and medicated early weaning techniques - likely to be the result of extensive wildlife reservoirs.

PE of pigs is now well established as a cause of significant health insult and economic loss through the world's pig producing industries.

Lawsonia intracellularis infection in pigs can be regarded as causing two major and distinct syndromes in pigs, although two additional syndromes can occur less frequently as complications of one of these. It is thus necessary to describe them all as distinct conditions.

PIA tends to occur in the younger growing pig, particularly from 6 - 8 weeks of age, and extending into the finishing herd beyond 3 months old. The principal presentation is one of diarrhoea - often loose pasty scour rather than profuse and watery - and loss of condition (Figure 1). In some cases, gut disfunction can be so mild that faeces are barely if at all abnormal and thus the condition simply causes a loss of growth - almost a classic subclinical disease. The result in the population is to produce disappointing but highly variable growth between pigs. 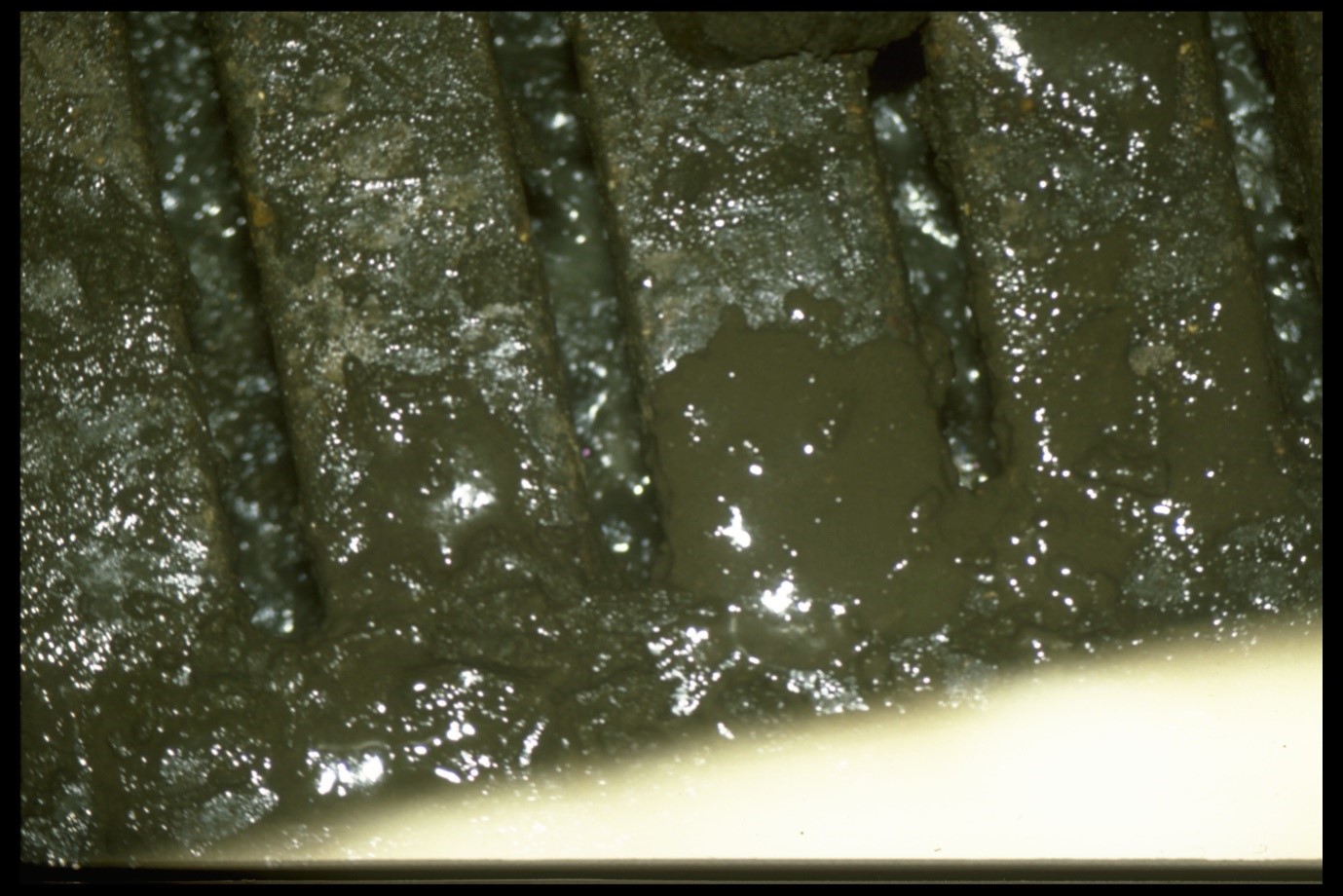 Once infected, the wall of the lower small intestine (ileum) and upper large intestine (colon) becomes thickened (Figure 2) and the changes persist for several weeks causing chronic loss of condition and scour. Eventually the pig will recover in most cases but be underweight and may require euthanasia on economic grounds. It is rare for pigs to die of uncomplicated ileitis or PIA. 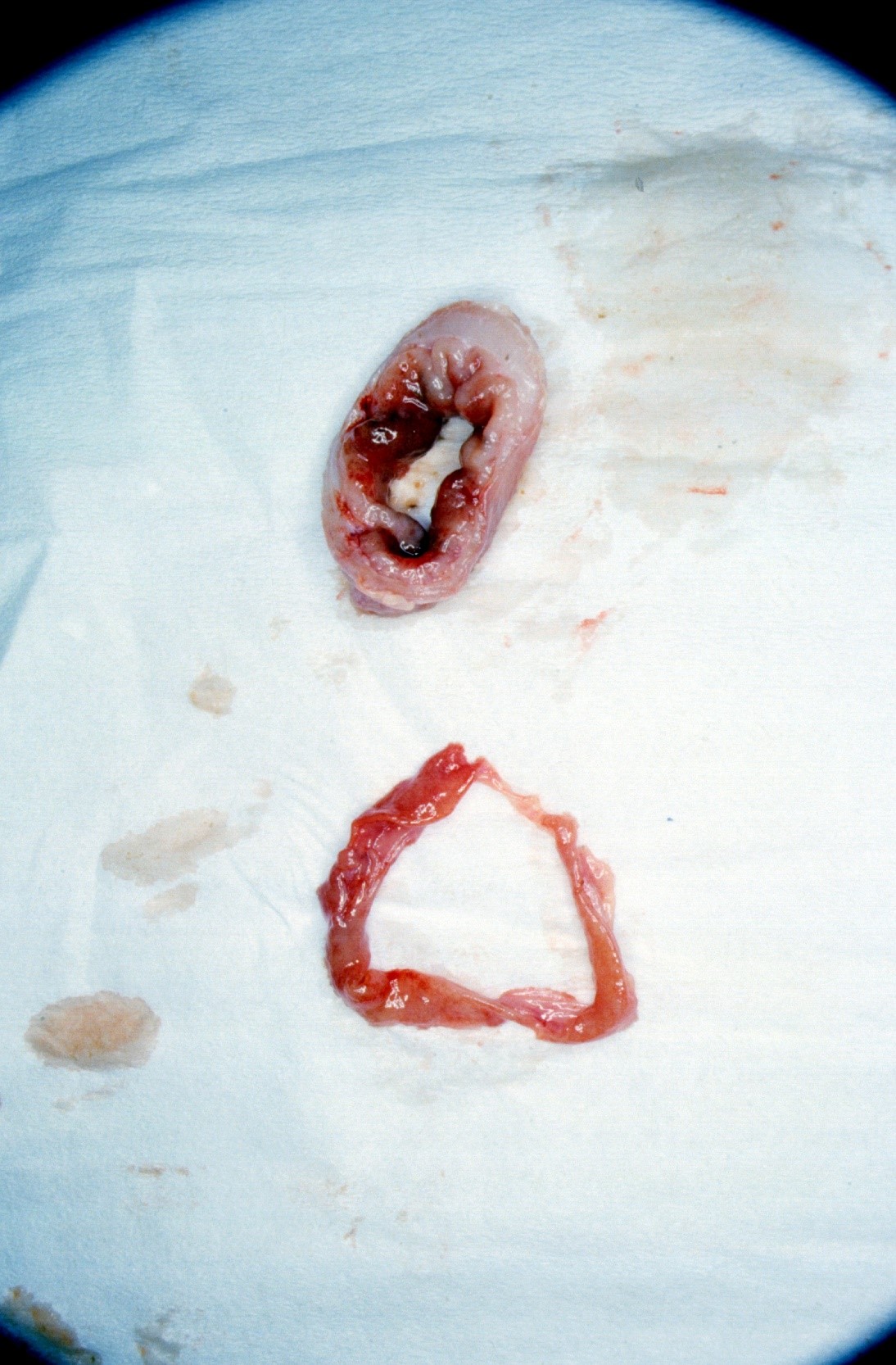 In many farm situations, particularly where pigs are affected above 10 weeks of age, multiple mixed infections can be found with Sprirocaetes (especially Brachyspira pilosicoli), Salmonella and Yersinia often found as part of a growing pig enteric syndrome often termed colitis or "grower scours" /bulletins/colitis.aspx

These additional infectious agents may alter the character of diarrhoea, in some cases causing haemorrhage and fatal consequences.

a) Necrotic enteritis. The thickened gut wall develops a necrotic luminal surface that is grossly indistinguishable from Salmonella induced necrotic enteritis but in this case the pathology rarely extends beyond the confines of the terminal ileum (Figures 3 and 4). 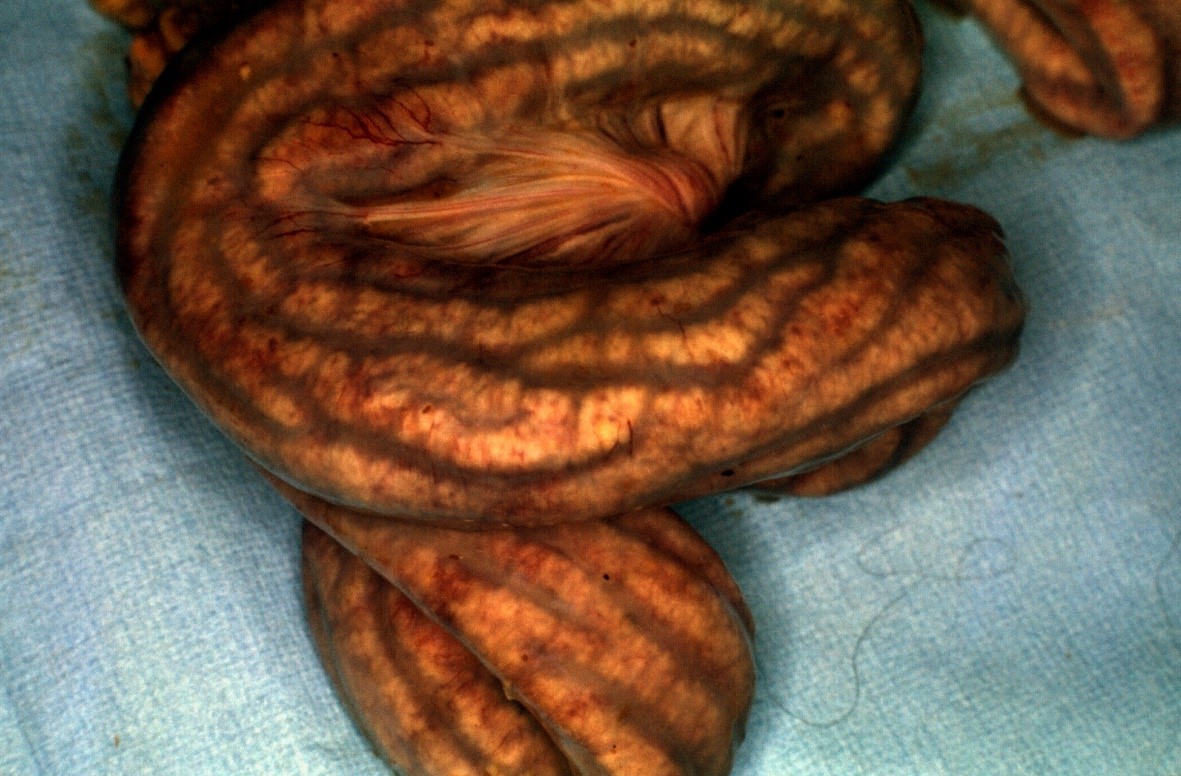 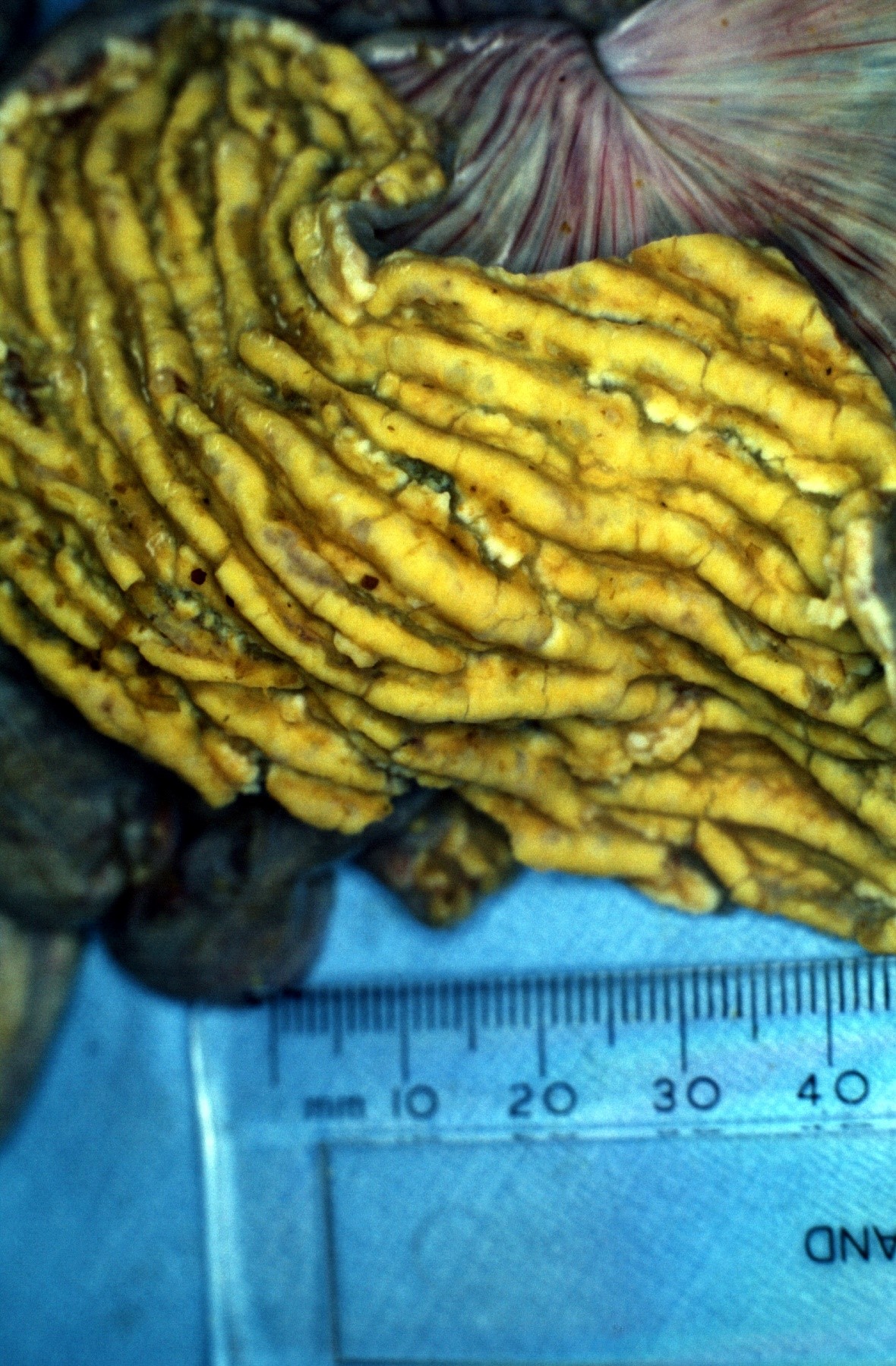 b) Hosepipe gut. The gut wall is smooth and thickened but the mucosal surface of the ileum is ulcerated.

Such complications are normally only seen as a consequence of primary PIA within a group causing occasional deaths. However, the possibility of subclinical PIA means that such deaths can be isolated and unexpected.

This is the original presentation of PE described in the 1960's and occurs in older growing pigs and replacement breeding gilts, particular the latter when entering a farm as high health animals and meeting a highly contaminated environment. Pigs are usually found dead but may occasionally persist as pale and depressed animals producing foul-smelling black tarry faeces. (This condition is clinically indistinguishable from severe gastric ulceration.)

On post mortem examination the lower small intestine and upper large intestine will be filled with a rope of clotted blood, and tarry material will occur lower down the gi tract. The terminal ileum may be thickened but usually the mucosal surface is raw and ulcerated. Bleeding points are not usually visible to the naked eye (Figures 5 and 6). 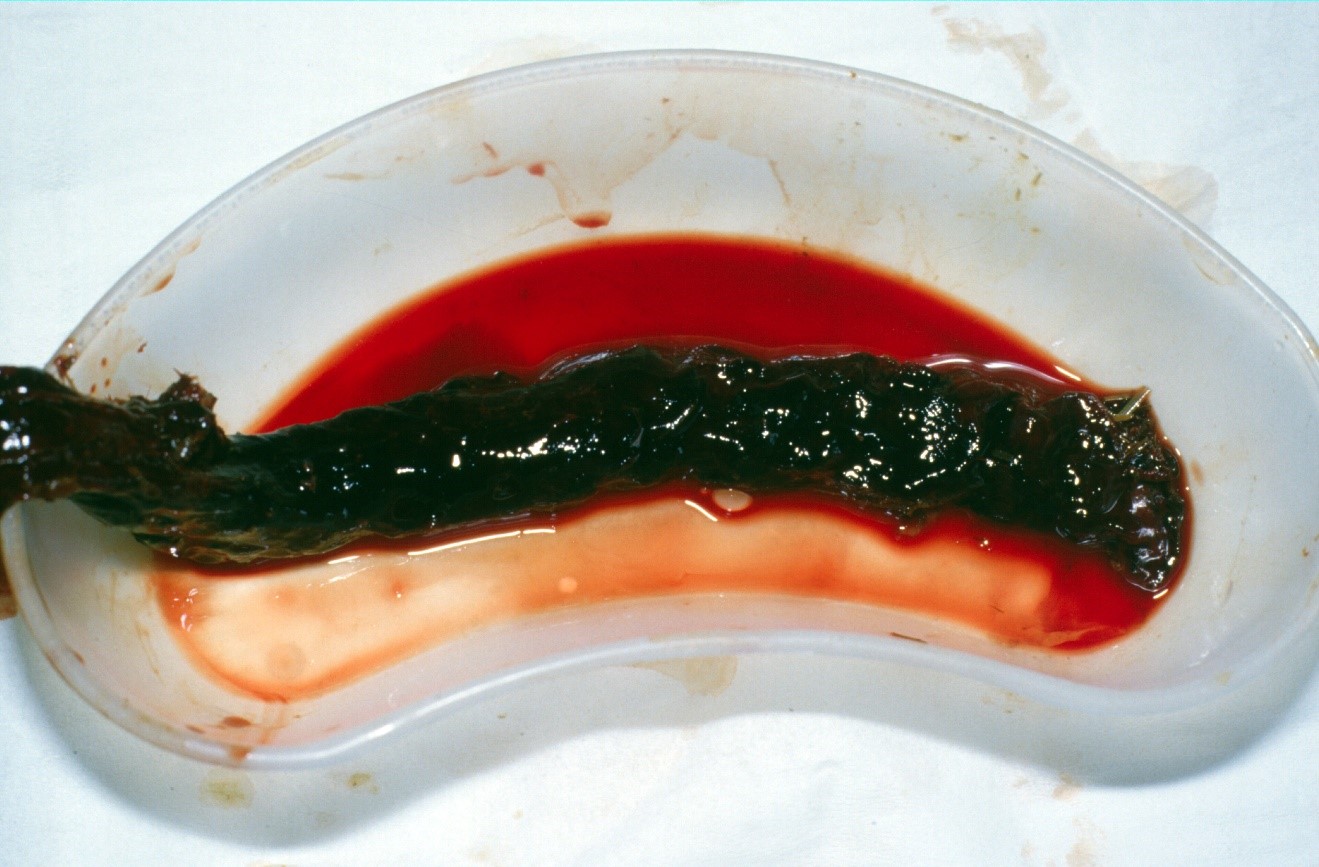 Fig 5 A rope of clotted blood typical of PHE 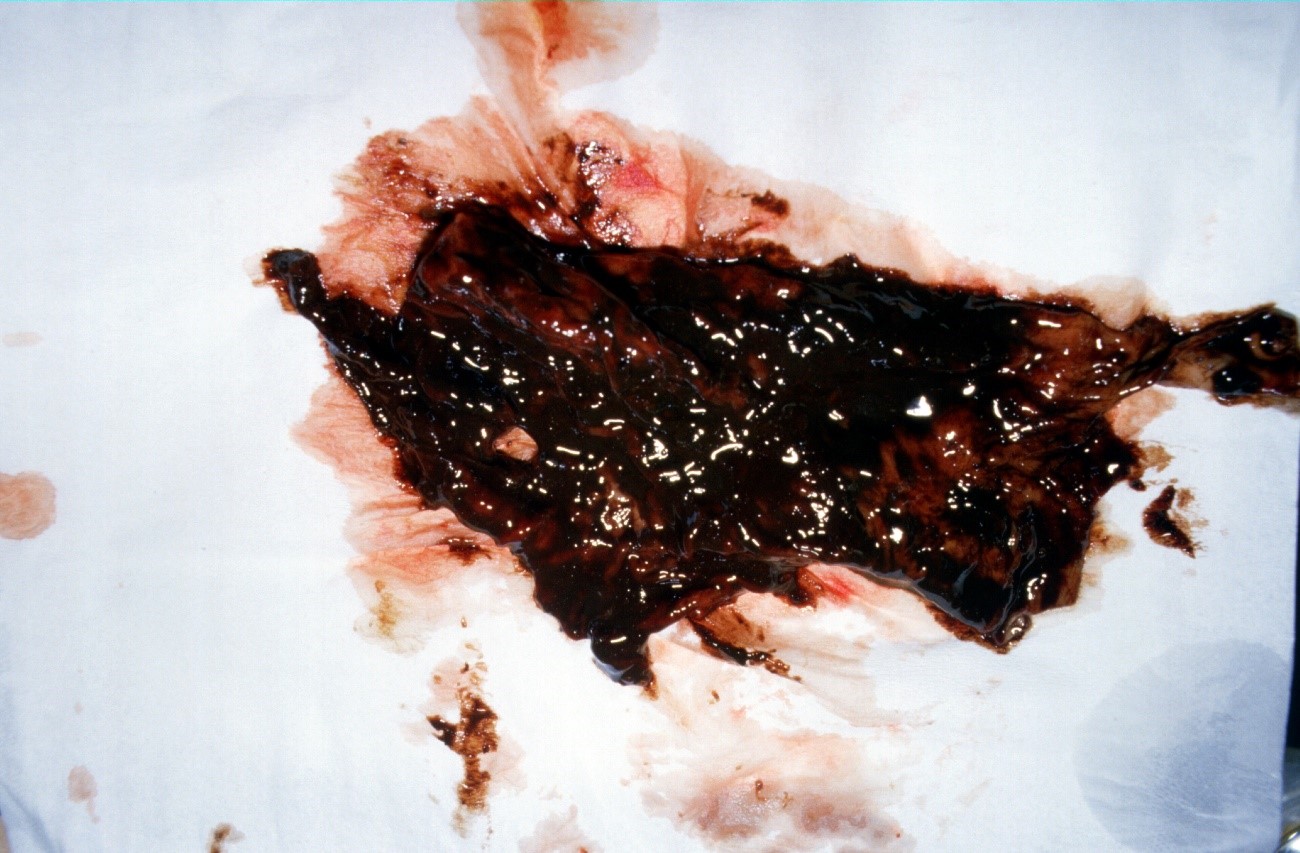 The pathogenesis of PHE remains something of an enigma, but possible explanations arei.

i. Naïve animals meeting a wall of infection;

Whilst the condition is sporadic and can occur at any time it particularly tends to occur in cold weather in recently delivered replacement gilts.

The ubiquitous nature of Lawsonia intracellularis in pigs means that identification of the bacteria alone either in the gut or in faeces, or serological reactions to it, are not diagnostic. Clinical and gross and laboratory based histopathological findings (the latter involving silver staining techniques) supported by PCR confirmation of the organism form the main diagnostic criteria.

When first suspected and diagnosed the early stages of a PIA outbreak are treatable with antibiotics. As an intracellular bacteria antibiotic selection will need to be focussed on actives that penetrate the cell wall. Macrolides are classically able to do this but tetracyclines, lincosamides and pleuromutulins have all been found to be effective, either via water or infeed. Individually scouring pigs respond to long-acting tetracycline or macrolide injections.

Where hygiene is suspect, leading to high levels of environmental contamination, a cleaning programme is essential and avoidance of stress is necessary for all health control protocols.

It is no longer acceptable for antibiotics to be used in the long-term to control a herd problem of PE. However, metaphyllaxis - the treatment and control of disease within an epidemiological group only some of which are affected - and short term targeted prophyllaxis are acceptable and necessary to secure the health and welfare of the pigs. However, this should only be done until either the problem has passed - test withdrawal of medication being necessary - or until an alternative strategy such as mass vaccination has worked through the system.

In cases of PHE treatment of the remaining group metaphyllactically is essential, and whilst routinely medicating gilts on arrival on farm via feed has historically been used as a preventative measure, it is no longer acceptable as a continuing strategy. Husbandry changes and vaccination are the principal control strategies long-term.

A live attenuated oral vaccine is available for use in pigs from 3 weeks of age, providing protection for at least 17 weeks. Originally designed to be delivered via the water systems, the presence of hypochlorite in mains water renders this route less practical. (Binding agents such as skimmed milk can be used but tend to block pipes and nipples. Alternatively, vaccine stabilisers such as Vac-Pac Plus made for the poultry industry may be useful.) Equally acidification of water supplies can adversely affect vaccine efficacy.

Many producers therefore tend to apply vaccine by individual oral dosing. The vaccine is only available under veterinary prescription. Irrespective of method of administration, the concomitant administration of antibiotics active in the gut against Lawsonia must be avoided, although the presence of therapeutic levels of Zinc Oxide in the feed is not reported to interfere with vaccine efficacy. Where mixed infection is involved, vaccination for Lawsonia alone may not provide complete control of a clinical scour problem such as grower scours.

Where gilts are vulnerable to PHE post selection/on delivery, it may be necessary to give a second dose of vaccine at approximately 20 weeks of age. This is off licence and only applicable under direct veterinary instruction.

Effects of Disease and Control

PIA has a serious but variable effect on growth of pigs. In the presence of clinical disease, treatment can improve growth by 30 - 50 grams per day, reducing days to slaughter by up to 7 days. Vaccination is reported to lead to improvements 30 grams per day. It is therefore necessary to consider the cost benefit ratio of vaccine use. This consideration however is also influenced by the general need to avoid long-term cheap infeed medication to control any endemic infection including PE.