It is often said that the first 24 hours of life are the most dangerous (although it could always be argued that the last 24 hours are even more so).  For the young piglet the birth process involves moving from a fully controlled protected, sterile environment of 39°C in which nutrients, fluid and oxygen are supplied through a tube (the umbilical cord) into an environment which is contaminated, of variable temperature, requiring competition for food and having to contend with a large moving object (the sow) that is 150-200 times its own weight and liable to squash it at any time.

However, whilst the smallholder faces different challenges to managing the farrowing process of the sow compared to the commercial producer, the principles are the same.  Sows housed in loose accommodation and farrowing in sties or similiar pens generally encounter fewer difficulties than the commercial sow in a crate and most will farrow without the need of assistance,  The sow and litter in many cases have high individual value - especially if of rare or pedigree breeds or even as pets.

Small pig keepers will therefore be more likely to attend farrowings constantly.  However, it is important that interference and disturbance of the sow are kept to a minimum - agitation will increase adrenalin release which blocks oxytocin induced uterine contractions.  Once started, piglets should be delivered at no more than 30 minute intervals and action is only needed if the sow is in distress, straining and has not passed a piglet in that time.  Professional advice should be sought but any manual interference must only occur whilst observing the strictest hygiene standards.  Bear in mind also that the sows' vagina carries a wide range of micro-organisms that can potentially spread and cause disease in man.

The biggest dangers to the newborn piglet are:

3) Crushing by the sow

4) Lack of colostrum and infection

Techniques to clear fluid from the throat and airways include:

a) Hanging by both back legs and gently swinging 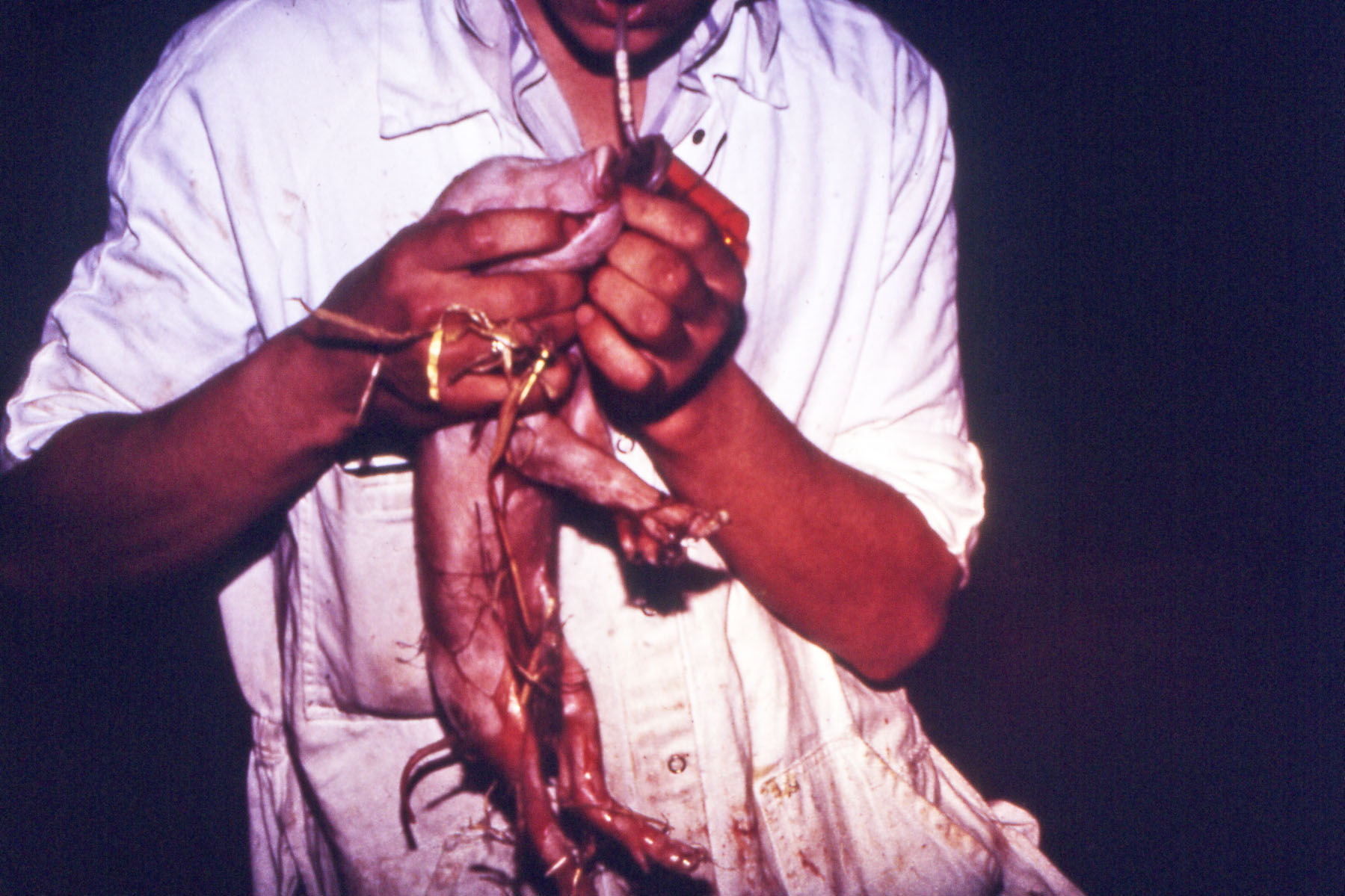 Fig 1:  Removing fluids with a pooter

d) Gentle rubbing of the rib cage with the hand or straw or even gently poking straw into the external nostril will often stimulate breathing.

A therapeutic product - (Doxapram : Dopram V :Zoetis) is available for placing under the tongue of newborn animals to stimulate breathing but is not licensed for pigs and can only be supplied under the prescribing cascade by a veterinary surgeon.

A further issue which stimulates vigorous debate amongst pig farmers is whether or not the umbilical cord should be broken deliberately once the pig is delivered or whether it should be allowed to break naturally.  Suffice to say that considerable amounts of blood are present in the placenta and cord which naturally should pass into the piglet.  If the cord is to be broken, blood should be gently milked out into the pig first and then the cord either tied or clamped with a human naval clamp.  Dipping the end of the cord in iodine solution or spraying with antibiotic spray reduces the risk of infection but must occur at the severed/broken end of the cord, not at the base.

Body temperature will inevitably drop after birth.  This can be minimised by:

a) Drying with paper towels

b) Placing under a heat lamp

Unless the litter is to be constantly monitored and sucking activity managed, there is always a risk of overlying by the sow.  Many believe that "old fashioned" and miniature breeds are more receptive to piglets squeals and will move to release a trapped piglet - a feature almost unheard of with modern commercial hybrid sows.  Avoid too much long straw which can trap piglets' legs impeding movement and make crushing more likely.

The piglet receives no immunity from its mother across the placenta; it relies on antibody rich colostrum (aka pre-milk, beestings or bisnings) that is must absorb within the first 6-12 hours of life.  A piglet weighing c1.4kg should receive 30-50ml of colostrum by six hours of age to provide full protection against infection in the early weeks of life.  (Smaller breeds including pet pig breeds such as Kune Kune and Vietnamese Pot Bellied pigs obviously require physically lower volume.)

In most cases sows will suckle perfectly naturally but weaker pigs may need to be held on to a teat to help intake whilst gently rubbing the udder.

Avoid loud noises including music around this time, particularly as the necessary communication between sow and litter can be drowned out.  Excess colostrum from some sows can be "milked off" and frozen in ice cube containers to be provided in future if colostrum fails or the litter is too large.  Do not defrost in a microwave - allow it to melt and bring to 35° before administering via a syringe into the mouth.

Some producers will tape over rear non-productive teats to avoid piglets mis-sucking (fig 2). 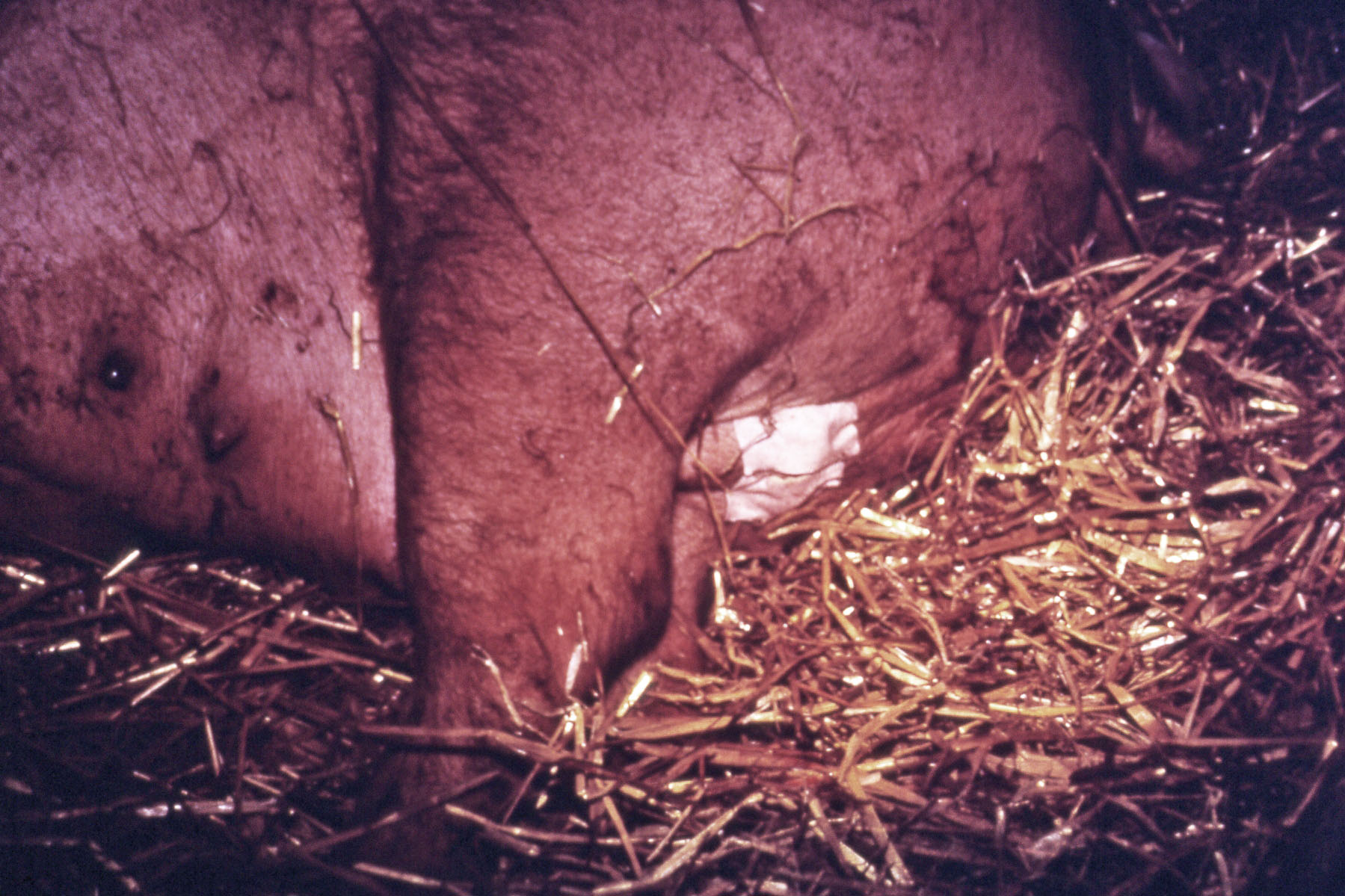 The needle teeth (corner incisors and canines both sides, top and bottom) are well named (Fig 3). 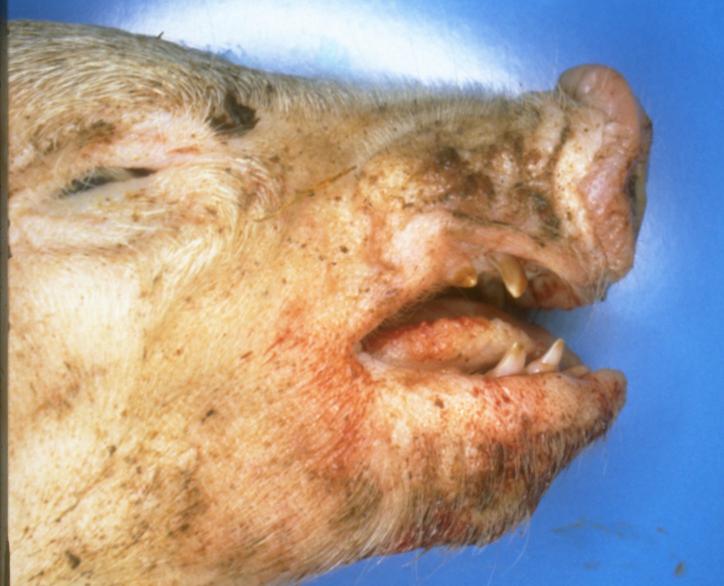 Fig 3:  The needle teeth can be very damaging and are well named

Not only can they cause considerable damage to littermates faces (leading to facial necrosis Fig 4) but can damage the sows teats and udder with serious potential consequences:

1) Introduction of infection into the udder (mastitis)

2) Reluctance to permit sucking by piglets

The greater the level of competition the higher the risk of damage. Where such problems are seen the veterinary surgeon may recommend clipping or grinding of teeth on the first day of life.  The Welfare of Farmed Animals (England) Regulations 2007 only permits teeth reduction where problems are known to occur due to its omission. (see below). 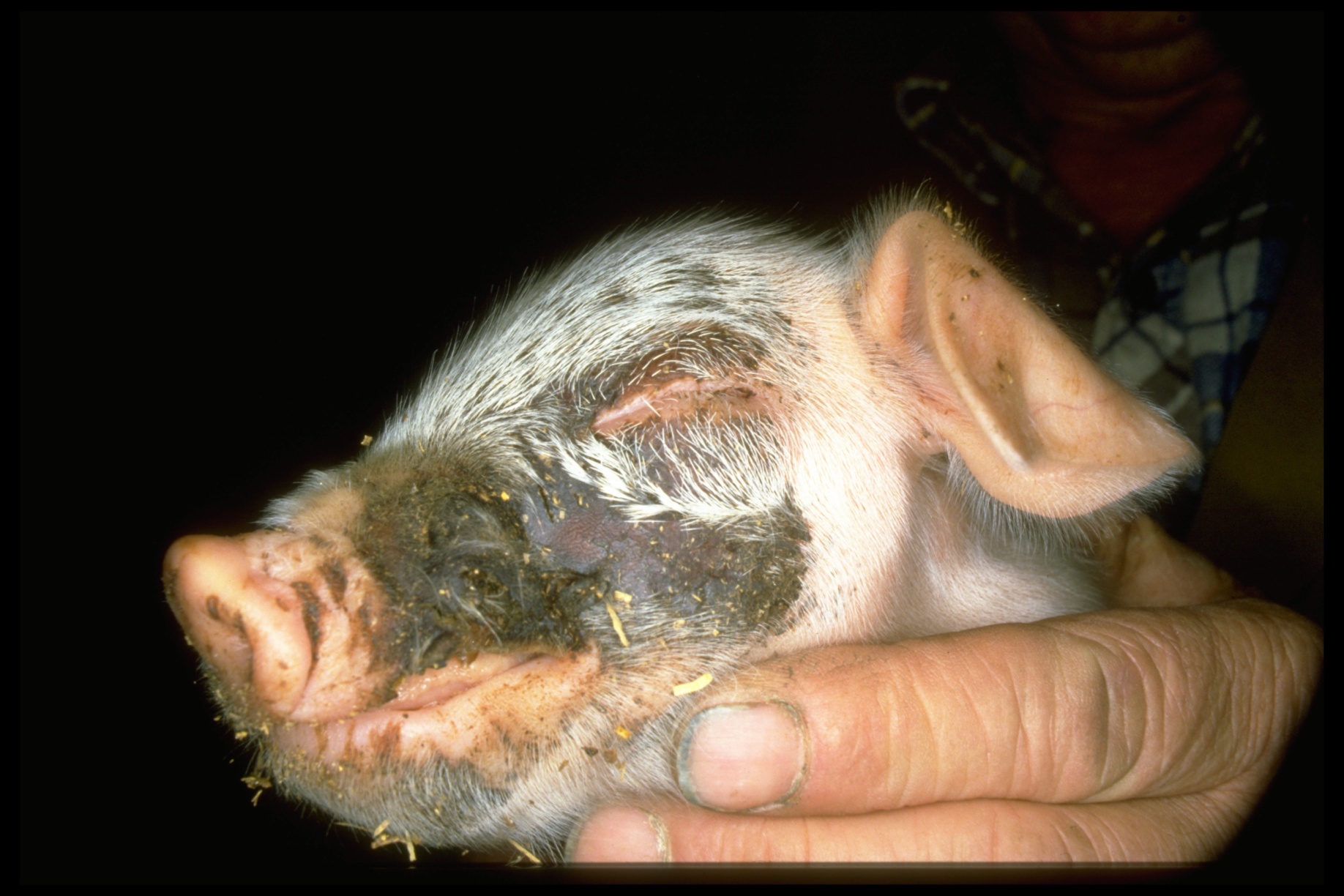 Due to the critical importance of colostrum intake to the piglet, it is vital that, other than assisting colostrum intake in the first 6 hours and dressing the navel wound, no interference should occur - the piglet should be allowed to bond with its mother over this time.  Within the first few days where it is necessary to pick up the pig, provided it is done gently, little harm can be done (due to the low weight of the pig).  It can be lifted by one or both legs or around the chest/shoulder with one hand. Never swing or dangle a piglet by one back leg.

Where teeth clipping is advised this should be done 6-24 hours after birth using sharp clippers, ideally clipping one tooth at a time (remember there are 8 to clip) and ensuring you do not damage the gums or shatter the teeth.  The piglet should be held under one forearm with the mouth opened by a finger from the side and the teeth clipped from the front/side. 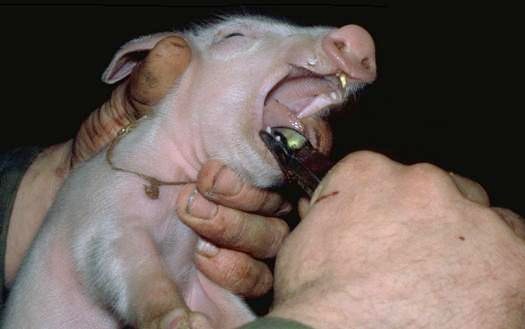 Fig 5:  Teeth clipping the baby piglet (It is better done singly rather than in pairs)

Should iron injecting be required - many outdoor reared pigs are not routinely treated - and if tail docking is to be performed (as with teeth clipping only under veterinary directions where subsequent tail biting problems are known to be a risk) this should be done at 3 days of age with similar care in lifting and handling (Fig 6 & 7). Never use the same tools to dock tails as were used to clip teeth. 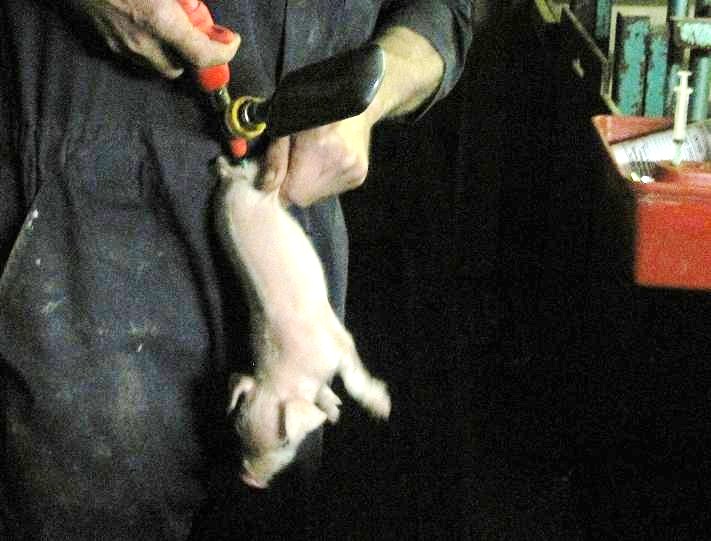 Fig 6:  Iron injecting at 3 days - note tension on the skin to create a flap to prevent leakage

Once piglets have been attended to, they should be gently placed back with the sow - not dropped from a great height!

Whenever handling young piglets it is wise to shut the sow away - they can be quite protective and aggressive to manhandling their litter. 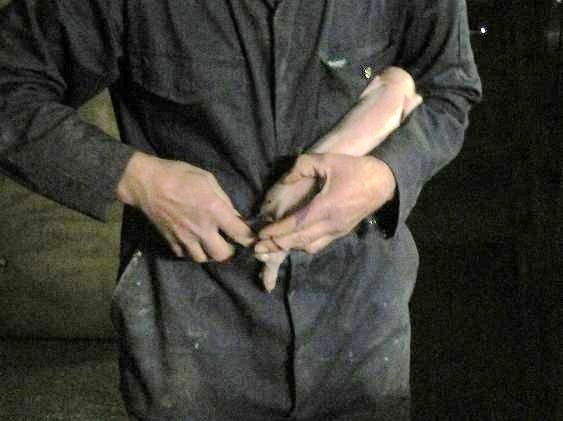 Fig 7:  Tail docking supporting the piglet with the forearm

Whilst lifting piglets of less than 2kg liveweight in the first week of life is unlikely to cause physical harm to them, the same cannot be said of lifting pigs at weaning (6kg+) - a common procedure which has been added to by the routine vaccination of piglets around weaning e.g. for PCVAD.

Typically piglets will be caught and lifted by one back leg and may even be suspended by one leg to allow vaccination (Fig 8). 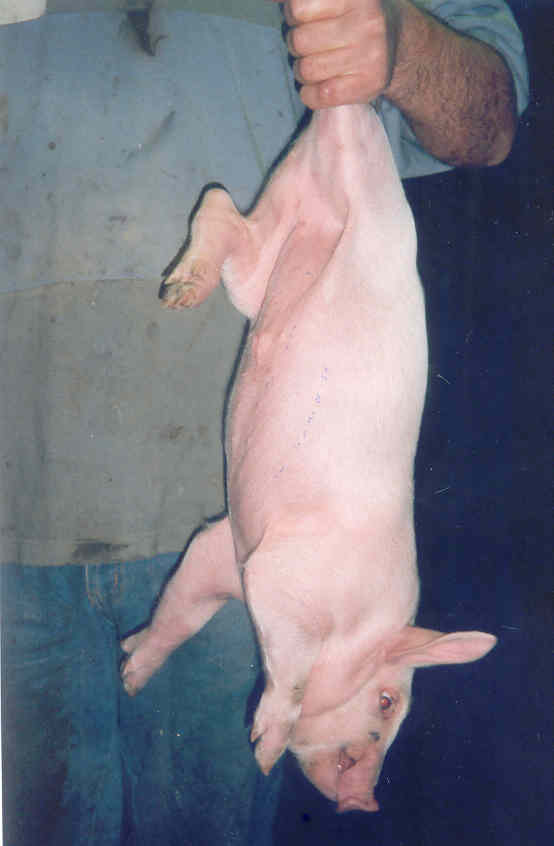 Fig 8: Lifting a heavy pig by one leg can cause serious harm

This can have serious effects on the pigs:-

2) Suspending by one leg creates shearing forces between the 2 muscles either side of the healing umbilicus due to the higher weight of the piglet.  This can open up the healing umbilicus allowing a rupture to occur through which abdominal contents will pass causing a classic umbilical hernia or belly rupture.

Such heavier pigs should only ever be lifted either by two back legs together (Fig 9) or by using both hands under the ribs/abdomen. 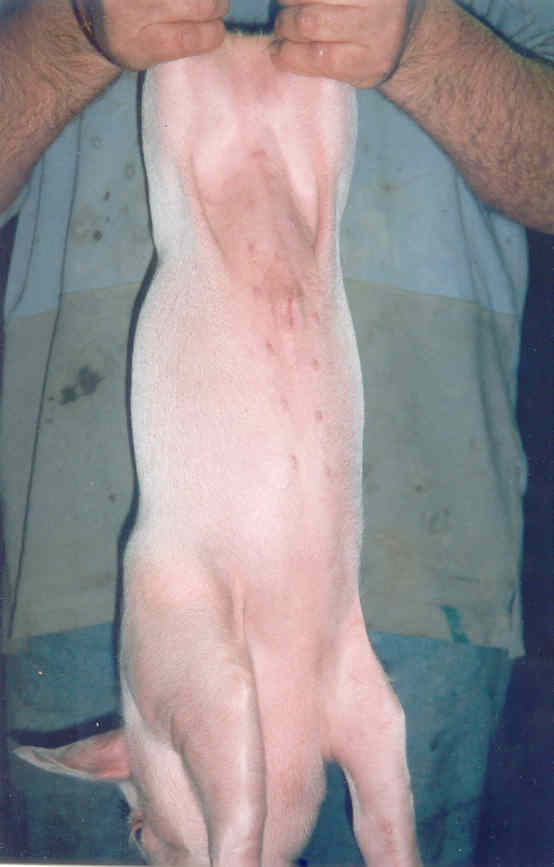 Fig 9:  Holding the piglet by 2 back legs reduces risk of harm

Note that it is recommended that vaccines at this age be given in the neck, not the ham.