Acute septicaemia ("blood poisoning") associated with infection with Haemophilus parasuis causing Glässers Disease is typically seen in weaners of 8-10 weeks old, although in a completely naïve herd, it can affect animals of any age including adults.  The causative bacterial organism - of which there are many identified strains - is very widespread in the pig population and in most herds infection is enzootic.  Disease can result from:-

1) Infection of weaners with high levels of challenge after maternal immunity has been lost.

2) Infection of introduced animals that are naïve.

3) Introduction of a strain variant to which immunity is inadequate.

In addition to the acute form of the disease, Haemophilus parasuis is an important component of Porcine Respiratory Disease Complex (PRDC) that can be seen at any age from weaning to slaughter, working in combination with a wide range of viruses, bacteria and Mycoplasmas. This condition can have major health, welfare and economic impact. 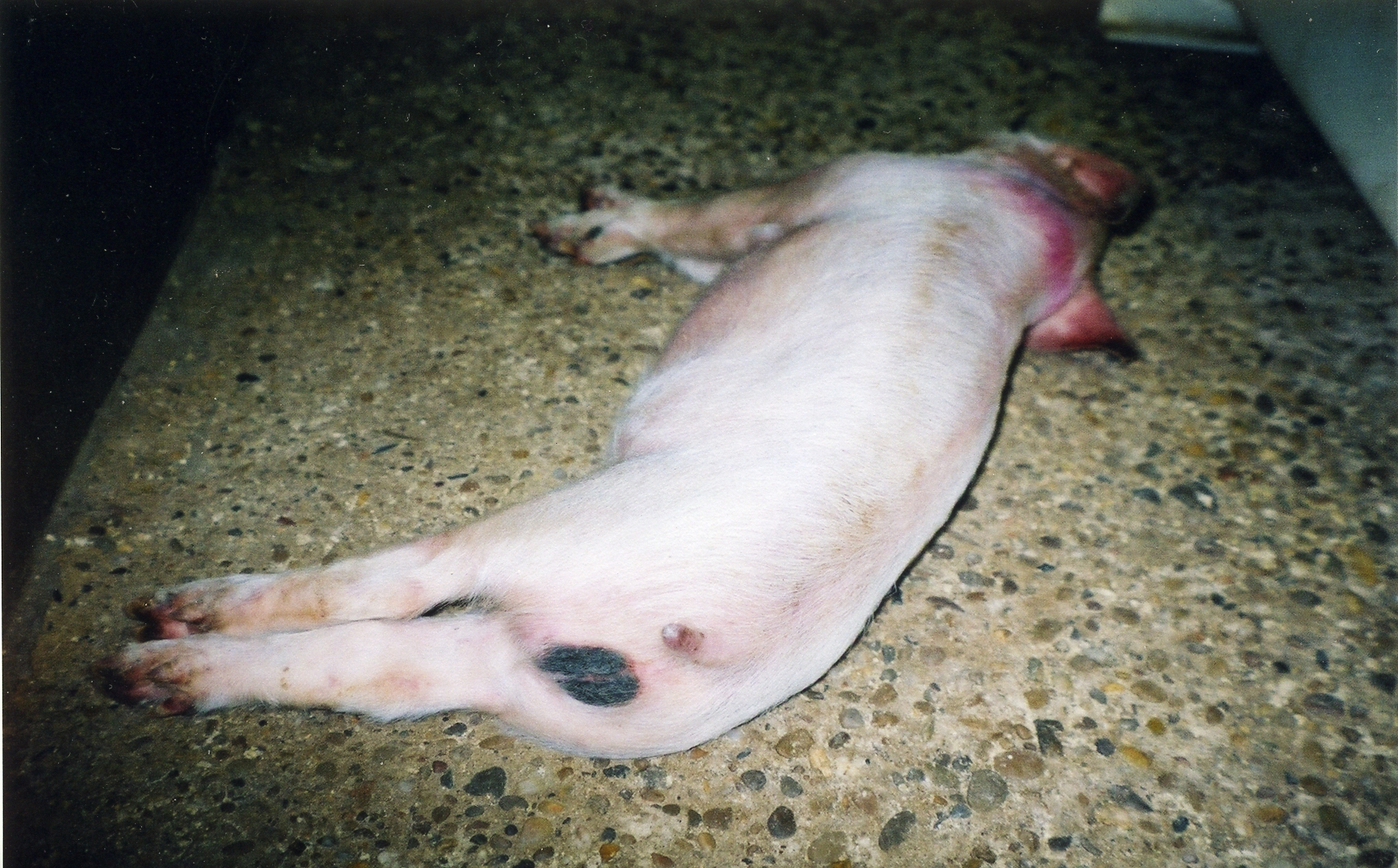 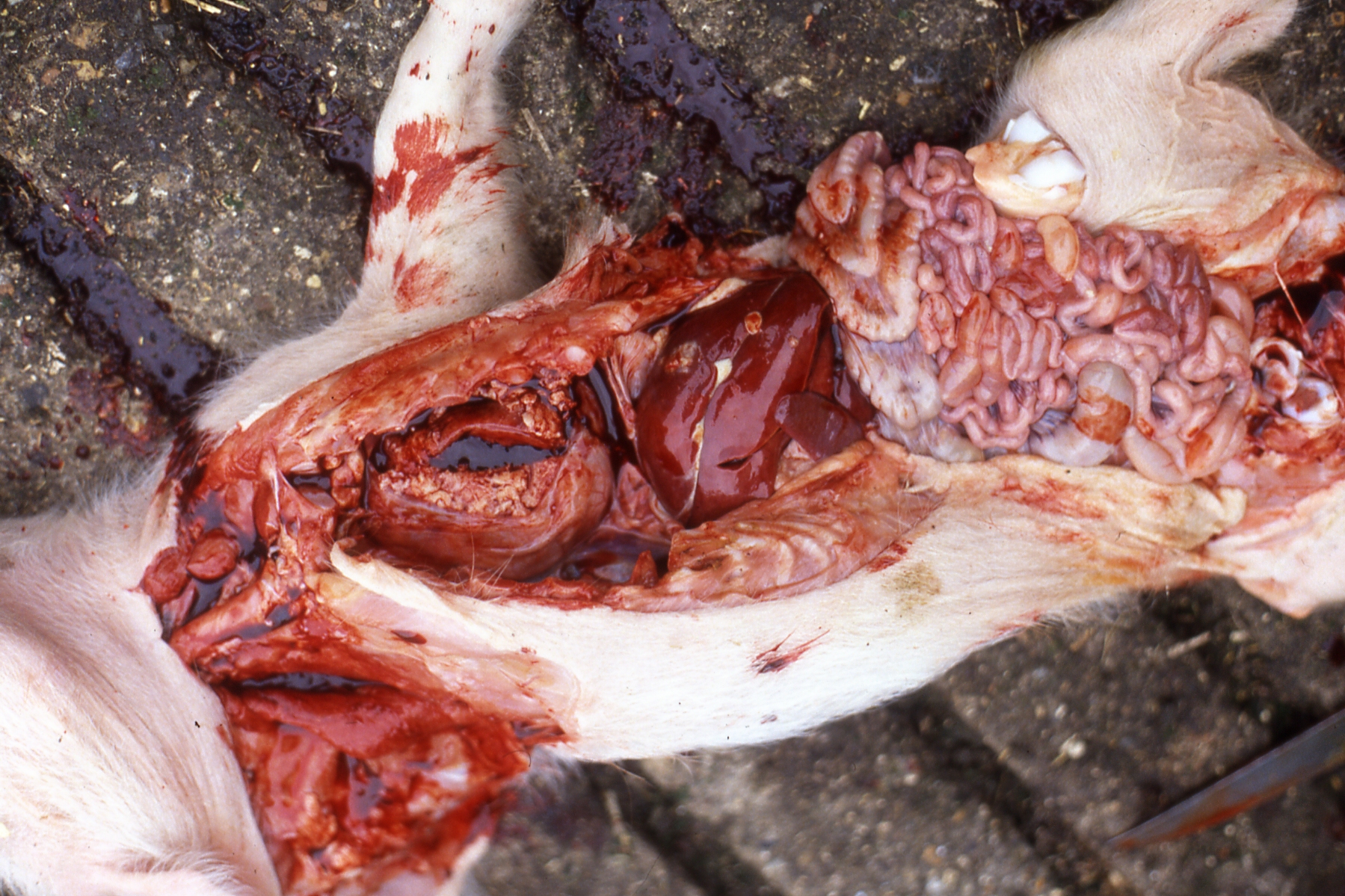 Fig 2: The typical post mortem picture of Glässers Disease with pleurisy and pericarditis 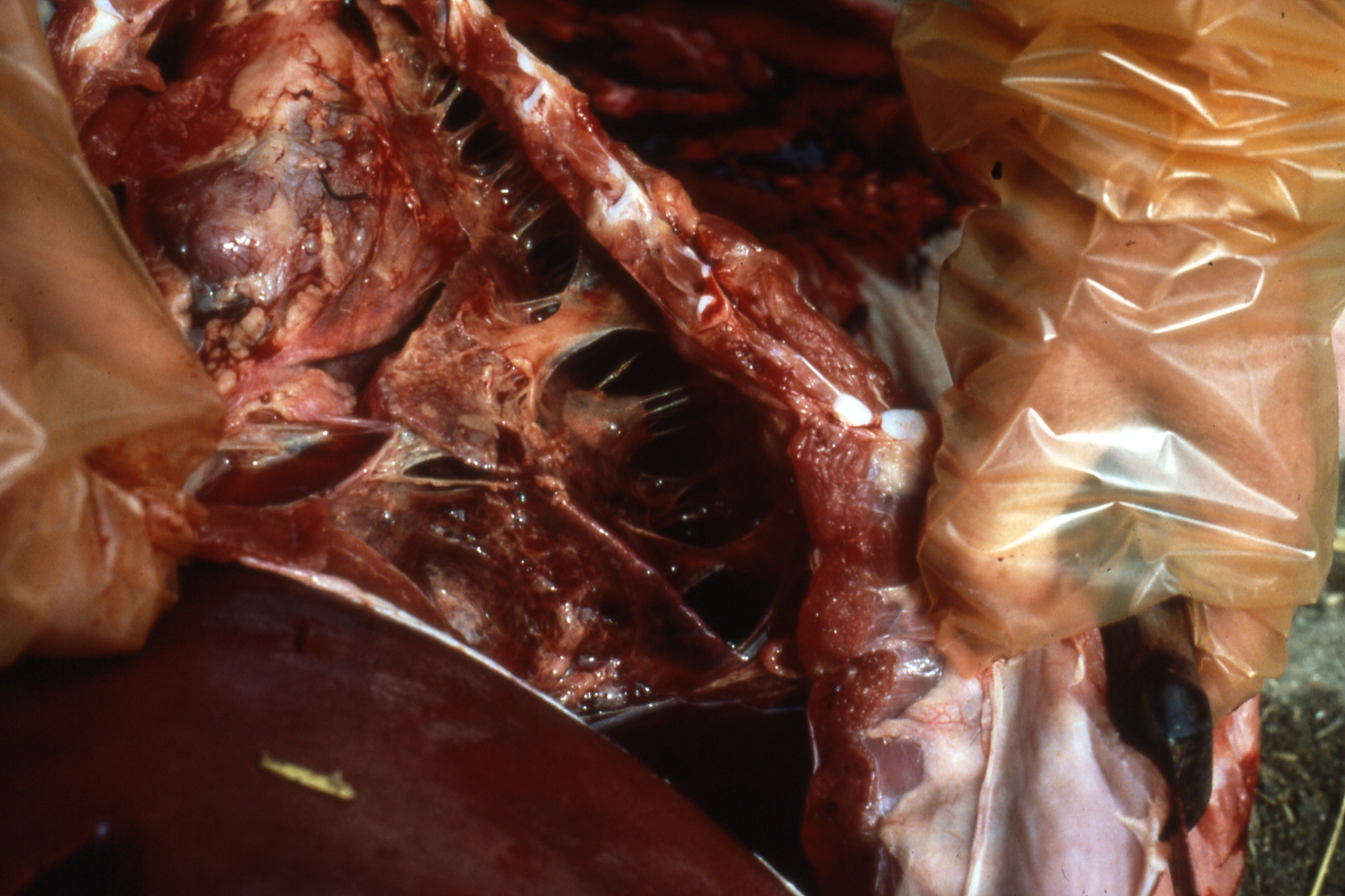 Fig 3: Chronic pleurisy can lead to a financial penalty in the abattoir

In the most acute form, pigs will be found dead.  Typically, there will be red to purple discoloration of the ears, abdomen and occasionally legs.  Where pigs are found alive, there will be a range of symptoms (Fig 1):

2) "Meningitis" although there is more twitching of the body rather the than paddling and convulsion associated with Strep suis infection.

4) Coughing - particularly evident in herds which are free of enzootic pneumonia.

The post mortem picture (Fig 2) is of a typical septicaemia with congestion of internal organs and excessive fluid and fibrin (protein) "tags" within both the abdomen and chest.  The organism can be cultured from lung tissue or body fluids but cultures are best done as samples from a freshly killed pig - the pH changes that occur after death will kill the organism.  Cultures must be set up rapidly if success is to be achieved.  If the pig survives the acute infection, the excessive fluid will organise and lead to adhesion that may then subsequently be associated with "sudden" death, or may simply be picked up at slaughter as fibrous pleurisy and pericarditis - the typical signs of chronic Glässers Disease.(Fig 3)

The acute form of the disease as a single infection and its consequences should be differentiated from the effects of secondary infection with Haemophilus parasuis in major viral disease outbreaks.  The organism will commonly take advantage of an animal damaged with PRRS or Porcine Circovirus and be the ultimate cause of death.  It may, however, be just one of a number of secondary infections in such situations.

In this situation a widespread respiratory disease that does not respond well to treatment will be seen in which slowed growth, loss of condition, coughing, laboured breathing and general malaise will be seen. Many pigs so affected will ultimately require euthanasia.

Occasionally, Haemophilus parasuis infection and Glassers Disease can be seen as a less severe but widespread disease in suckling pigs from 2 weeks old onwards associated with loss of condition, coughing and malaise. It is rare to also see the acute disease at 8-10 weeks in these herds.  Chronic cases with severe pleurisy and pericarditis (scarring around the heart) will still occur.

If spotted early enough and action is taken rapidly, affected pigs can be successfully treated and lead to a full recovery.  The choice of antibiotic to treat pigs will lie with the unit veterinarian but, as a general rule, penicillin based treatments give good responses but only when given early in the disease process.

Where outbreaks are ongoing, feed or water medication may be appropriate and the choice of antibiotics will again be made by the veterinarian, based on clinical experience and responses to injectable treatments.

Removed to hospital pens and provision of TLC are essential parts of any treatment regime for sick pigs, especially those affected by the more chronic forms of the disease.

Where a herd is known or believed to be free of Haemophilus parasuis, on no account should new stock enter the farm - carrier pigs being the most likely route of introduction.

From a clinical point of view, it seems that most pigs in an endemically infected herd pick up a "trickle" of infection in early life that overlaps with colostral protection.  In this way, natural immunity can develop without disease.  Separation of pigs early i.e. early weaning and rearing of weaners on a separate distant site may break this cycle of infection and lead to naïve pigs that then become infected at 8-10 weeks of age.  This picture seems more common in high health (Mycoplasma hyopneumoniae free) herds and suggests a possible association (or inverse one) between Haemophilus parasuis and Mycoplasma hyopneumoniae.

Whilst more than 15 strains of Haemophilus parasuis are known, tests are not available in the UK to differentiate them. Serotyping of isolates can, however, be done in a number of laboratories in Europe. There appears to be limited cross over of immunity between strains.  A commercial vaccine containing serotype 5 o fHaemophilus parasuis is available.  This would normally be administered to young pigs in two doses with a two-week interval.  It is sometimes used off licence, only under veterinary direction, in sows to protect very young pigs against disease.  However, if this serotype is not involved in the disease results may be disappointing.  (Historically, a Haemophilus parasuis vaccine containing serotypes 4 and 5 was available in combination with a Mycoplasma hyopneumoniae vaccine.  In practice, some farms have experienced disappointing control of Mycoplasma hyopneumoniae using this compound vaccine suggesting that the combination may in some way lead to interference. Furthermore, in SEP free herds, it may not be appropriate to use a Mycoplasma hyopneumoniae vaccine).

Where PRDC is involved, full diagnostic analysis of the disease picture will identify the different components and clinical appraisal will assess the relative importance of each component as primary, secondary or incidental.  With a wide range of respiratory active agent vaccines now available (including PRRS, PCV2, Mycoplasma hyopneumoniae, Glässers Disease, Atrophic Rhinitis, Actinobacillus pleuropneumonia and by importation under special import certificate (SIC), Strep suis) a full programme of vaccinations can be drawn up.  Effective combinations of these various components are eagerly awaited.

The general principles of disease control must also be applied to any pig keeping enterprise and, in the presence of active respiratory disease, attention to hygiene, all in all out management, aerial and thermal environmental control, correct stocking rates and group sizes and strategic medication all have a part to play.

Acute outbreaks of primary uncomplicated Glässers disease in naïve herds can cause high mortality and high cost in production and control.

A typical outbreak lasting six weeks in a 300-sow breeder/feeder farm, involved increased mortality in pigs of  around 40kg of 6% i.e. 51 pigs dead @ £80/head (plus disposal costs) and a three month medication programme for the herd costing £2/pig.  Subsequent vaccination over the long term added a similar cost to each pig produced.  Total costs for the outbreak were £8000 with an ongoing vaccine cost of £6000 per year.

The effects of PRDC on a herd are well documented with loss of growth of 50gm/day commonly experienced.  With mortality and medication costs, £7 per pig can be added to production.

Furthermore, Haemophilus parasuis is an important cause of pleurisy found in slaughter pigs requiring additional trimming of the carcass and loss of carcass weight (as well as adding processing costs)  Potentially, this adds another 70p per pig to the cost of disease.