Facial necrosis occurs in young pigs following abrasion of the cheeks as piglets compete for access to the udder. Bacterial infection invades the skin leading to blackening as the tissue dies.

Reduction of the eye teeth of new born pigs has long been recognised as a necessary procedure to stop the piglets damaging each other and the sows udder, which may compromise milk production.  However, in recent years there has been a tendency to not teeth clip as a result of:-

1) Pressure from the welfare lobby to stop "mutilation" of piglets, which has been translated into a statutory embargo on the routine reduction of teeth under the Welfare of Farmed Animals (England) (Amendment) Regulations 2003 (Schedule 6, paragraph 21).

2) A wish to reduce joint ill that may result from contamination of clipped teeth.

As a result, damage to litter mates is seen more commonly and, in some cases, this can progress to facial necrosis.  The initial damage occurs within the first 24-48 hours of life but secondary facial necrosis may not be seen until 4-7 days of age.

The 8 temporary eye teeth of the piglet (4 corner incisors and 4 canines) are present at birth, are extremely sharp pointed (often being referred to as needle teeth) tending to protrude out of the side of the mouth (Figure 1).  As pigs struggle and compete to suck on a teat, piglet mouths are brought into close proximity with each other and there is a tendency for aggressive lunges or more sustained aggression leading to abrasions and lacerations of the cheek, jowl and side of the snout.  The larger the litter the greater the competition and resulting facial damage. As litter size in the national herd has risen the risk of damage as a result of greater competition increases. Poorly designed crates which obscure the teat line can promote more aggression and greater damage but damage and facial necrosis can be seen in all systems including freedom farrowing indoors and in outdoor farrowing arcs.

In some circumstances, these skin wounds become infected with secondary bacteria with resultant scab formation and blackening of the skin.  The most common bacteria involved is Staph hyicus - the usual cause of Greasy Pig Disease - but occasionally other bacteria such as Fusobacterium necrophorum may be involved.  Where particularly pathogenic strains of Staph hyicus are involved, the skin disease can spread backwards over the body.  If the scabs are gently lifted purulent infection will be evident within the tissues.

Affected pigs may feel pain, be depressed and be reluctant to suck - tending to lead to loss of body condition and ultimately starvation - and bacteria may spread into the blood stream leading to death from septicaemia, and/or can settle in other parts of the body (such as joints) leading to long term intractable septic arthritis.

In an old study by Cambac JMA Research for MLC  there was intermediate to severe facial damage in 6.5 percent of piglets with intact teeth and a 0.7 percent piglet mortality directly associated with facial damage from intact teeth. While healing of low severity wounds was rapid (2-3 days), healing of intermediate to severe wounds took 15-20 plus days, with a 3 percent increase in the use of antibiotics. Some researchers have also reported more udder injuries when the teeth of litters are left intact. 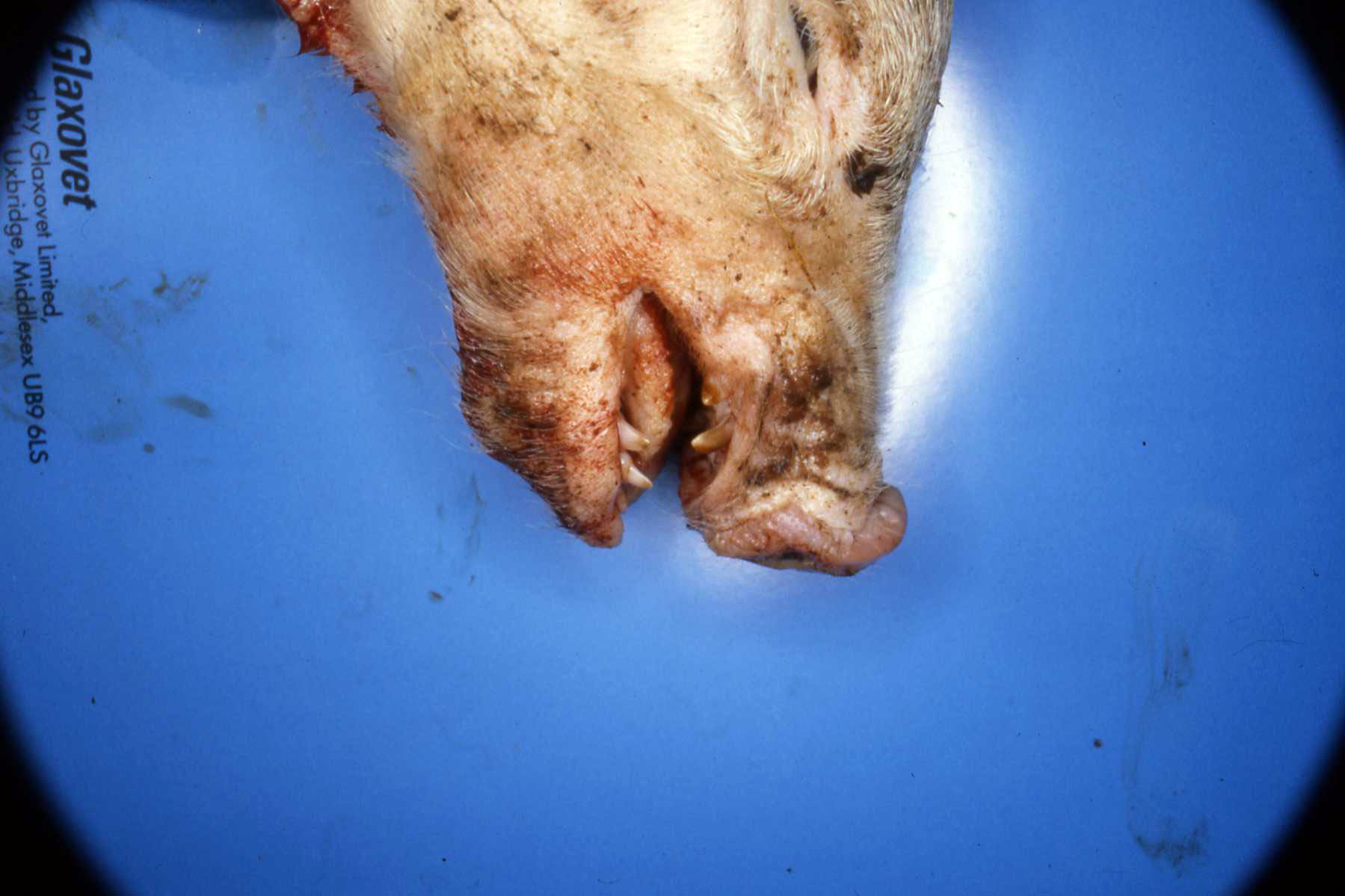 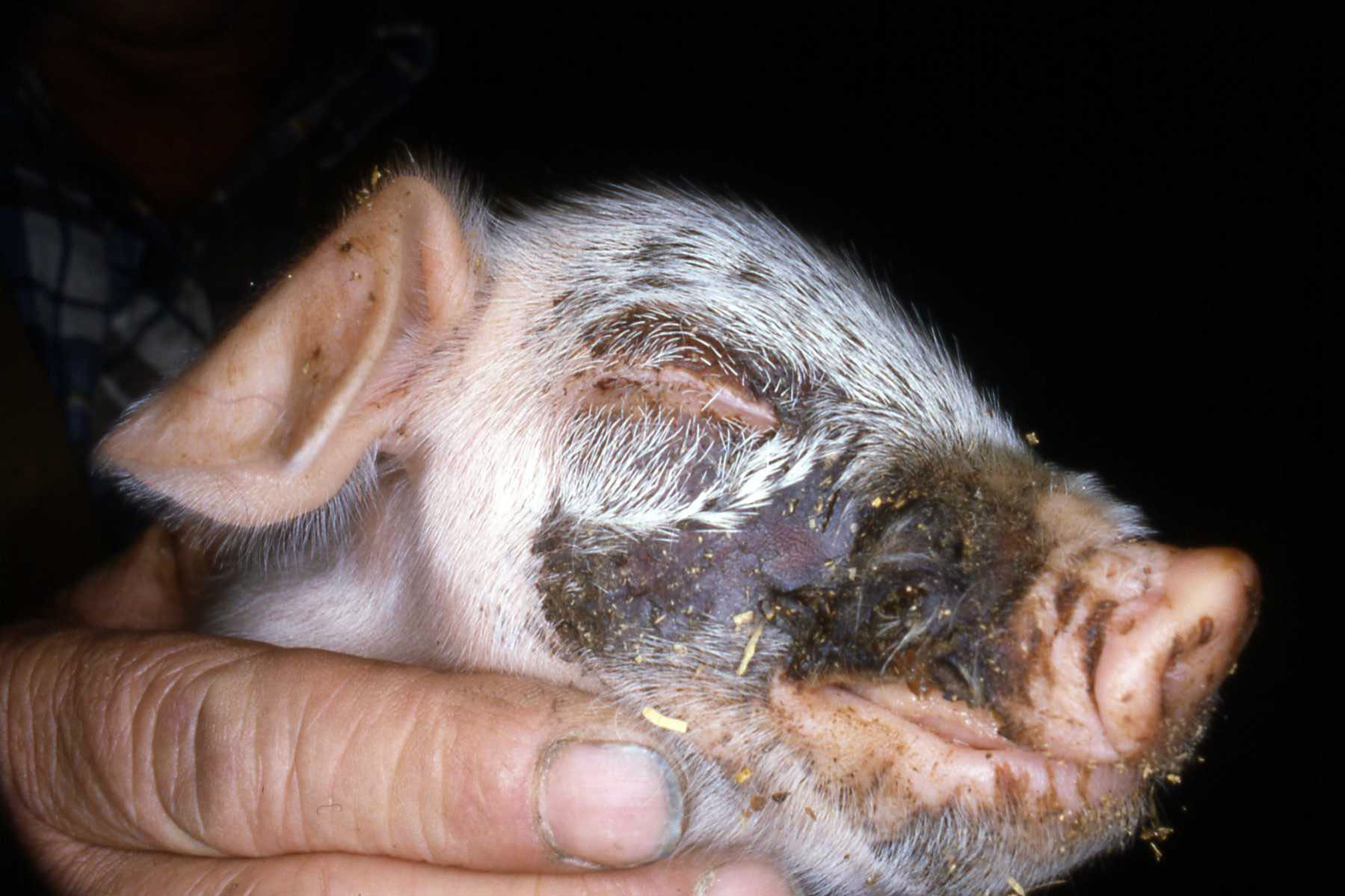 Fig 2: Facial necrosis can be the result of teeth damage 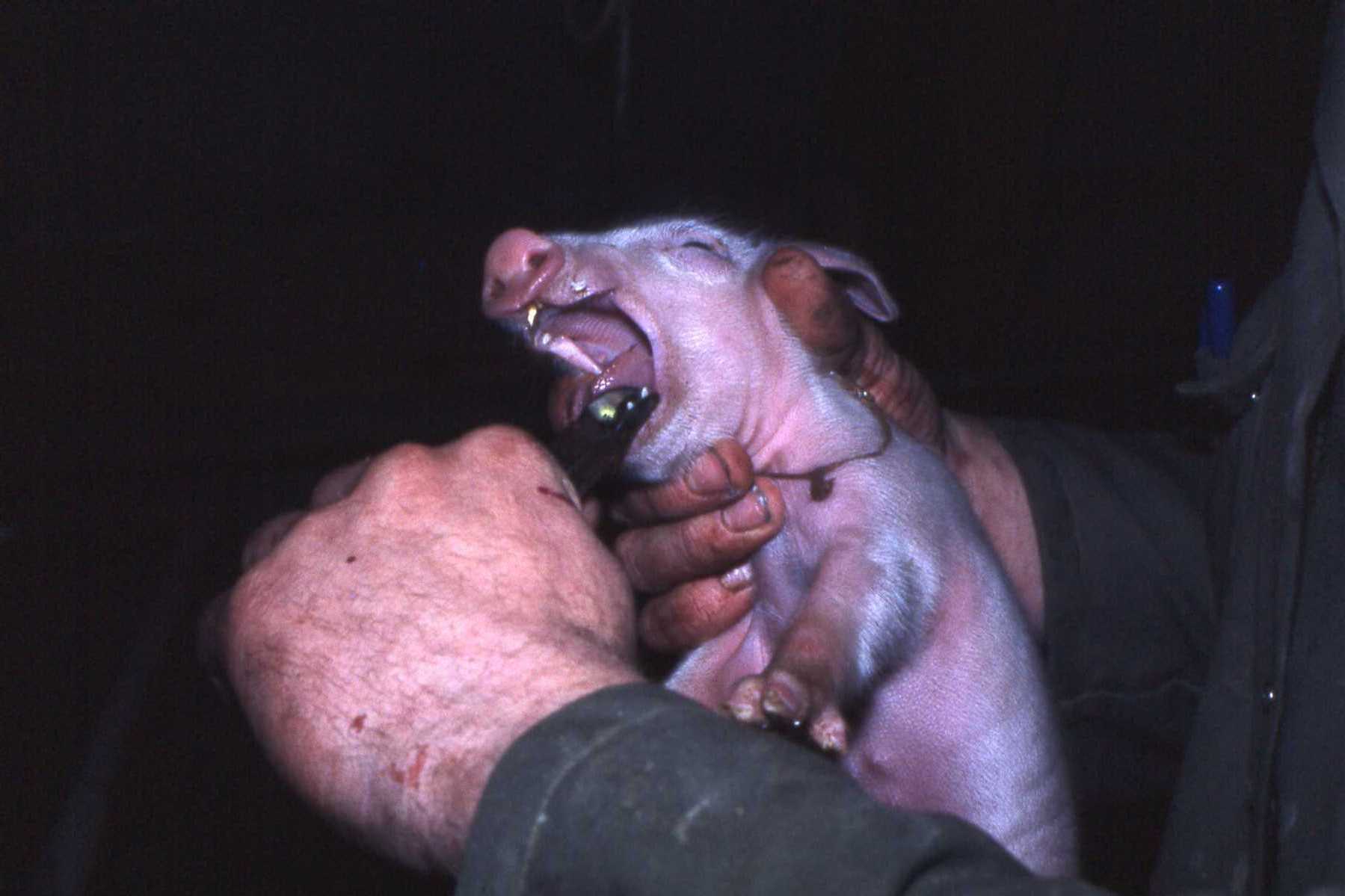 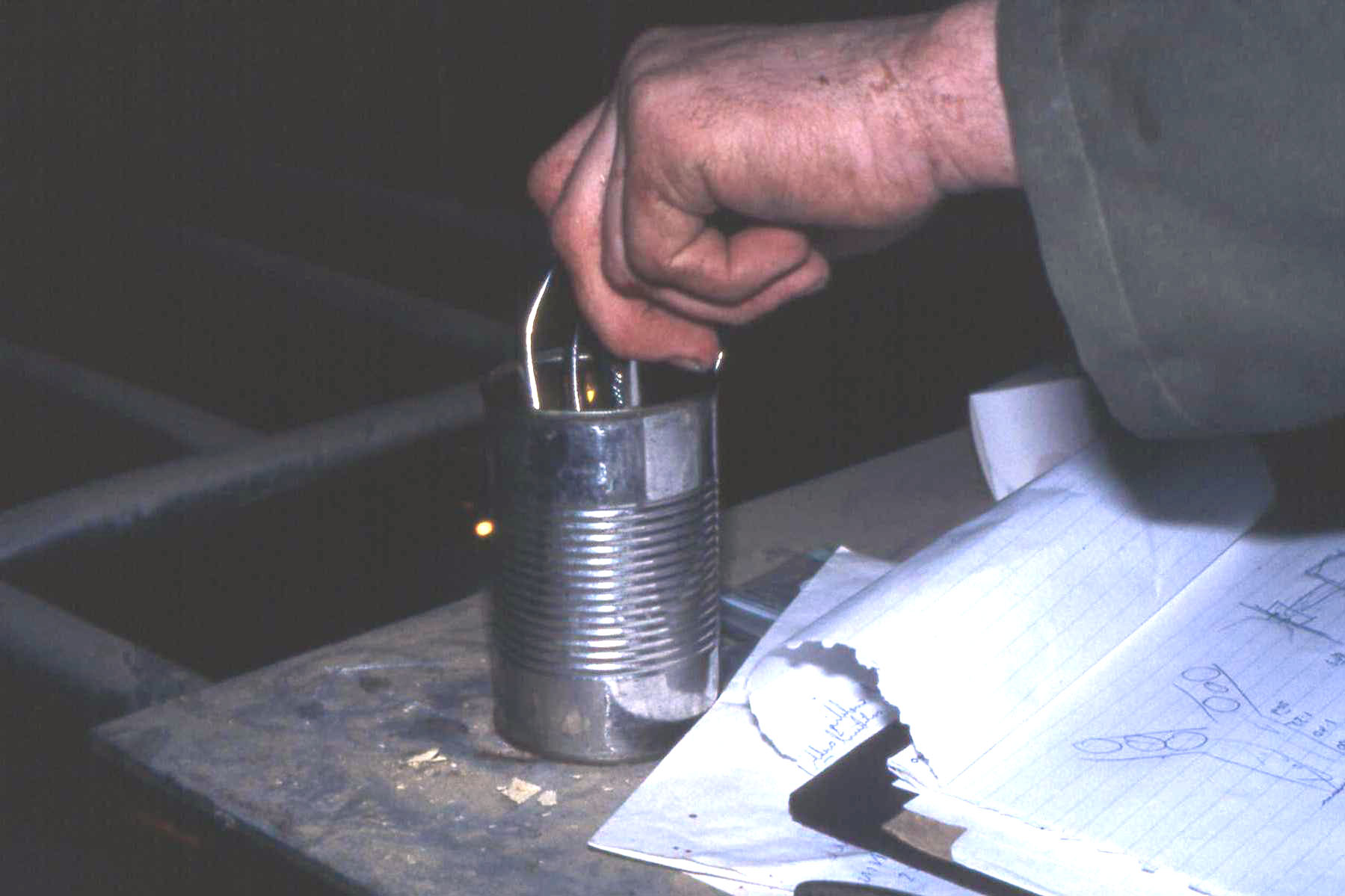 Piglets affected with facial necrosis require both systemic (injectable) and topical treatment.  Lincomycin or amoxycillin are commonly used effective injectable antibiotics but topical application of antibiotic cream may also be appropriate. Critically important antibiotics such as 3rd/4th generation cephalosporins and fluoroquinolones should be avoided. Where wounds occur and secondary infection has not yet become fully established, it is appropriate for treatment to be applied early to minimise the impact of the condition.  Bacteriological culture and sensitivity testing may be indicated to identify the best course of action and where there is an ongoing herd problem such testing should be undertaken every 6-9mths to check ongoing sensitivity.  Non-steroidal anti-inflammatory analgesics are appropriate support treatment.

Correct teeth clipping or tooth grinding will totally prevent the problem and is wholly justifiable where a risk is known or reasonably suspected.  The teeth must be cut flat and not shattered and, as such, very sharp clippers should be used. Historically, teeth have been clipped close to the gum individually but current Red Tractor standards now require that only the tips are removed.  Clipping teeth in pairs will tend to lead to shattering which allows entry of bacteria into the blood stream and cause secondary joint ill. Teeth should be clipped six to 24 hours after birth. Teeth grinding using a specifically designed mini-angle grinder is becoming more widely applied, although this is a much slower procedure.  Time is saved by only grinding off the tips of the teeth and such limited intervention reduces the risk of thermal necrosis of the gums due to heat generation. In either case full training must be provided.

Once teeth have been clipped they should be checked to ensure that shattering has not occurred- the main reason for bacterial penetration and subsequent joint infection.  If this occurs regularly then both technique and equipment should be reviewed.

It is also vital that scrupulous attention to hygiene of equipment is practised.  Clippers should be kept in a clean place, be thoroughly washed and disinfected after use and preferably dipped in surgical spirit between each piglet.  On no account should the same pair of clippers be used to dock tails- the contamination that exists in the piglets mouth will easily spread to the tail wound. Again QA standards specifically require separate tools to be used where teething and tailing are both deemed necessary and desireable.

If it is preferred not to teeth clip as a standard procedure and evidence of facial necrosis is seen, it is necessary for the stockman to closely monitor the faces of the piglets in the first 2 days of life watching for significant skin damage to the face.  Litters affected should be teeth clipped or round at that stage and damaged pigs treated as above.  If left unchecked, serious health, production and welfare problems will ensue.

Whilst the law requires the teeth reduction is not performed routinely, the welfare implications of interrupted suckling and facial necrosis fully justify its application under veterinary guidance.  It should be noted that clipping teeth before six hours after birth can interfere temporally with sucking and can compromise colostrum uptake.  Therefore delay until after this time but not beyond twenty four hours old where therapeutic clipping on a herd basis is justified.

Whilst the fully blown necrotic lesions illustrated represent the extreme end point of a failure to clip teeth, the milder abrasions and lacerations which are common can be associated with a raised level of mortality.  Studies in a number of farms have shown that mortality levels in litters where teeth are not reduced (where litter size at birth exceeds eleven pigs born alive) can be two percentage points higher than in teeth reduced litters (-i.e. typically a 20% increase in mortality).

Measured in a typical 500 sow breeding  unit  over a year this can lead to a loss of over two hundred and fifty extra piglets at a cost to the farm of more than £9000.

To remain within legal constraints, it is advisable to record evidence of facial damage in unclipped litters along with standard mortality figures to be able to justify therapeutic teeth reduction.