Enzootic Pneumonia (SEP) caused by Mycoplasma hyopneumoniae (Mhyo) is the most common respiratory disease seen in pigs both in the UK and worldwide.

As a pathogen the organism is unique to pigs. It is estimated that the disease is present in more than 80% of pig herds in the UK but at variable levels.

The causative agent is neither a bacteria nor a virus, occupying a position somewhere between the two.  The key features of the organism are that it is physically small and thus easily spread by the wind whilst still being susceptible to a wide range of antibacterial drugs. 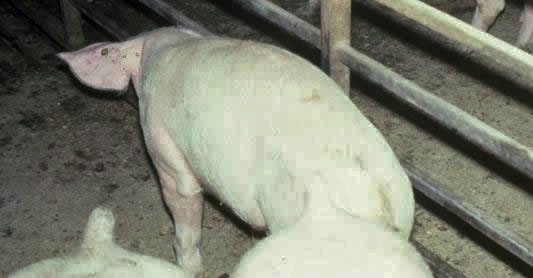 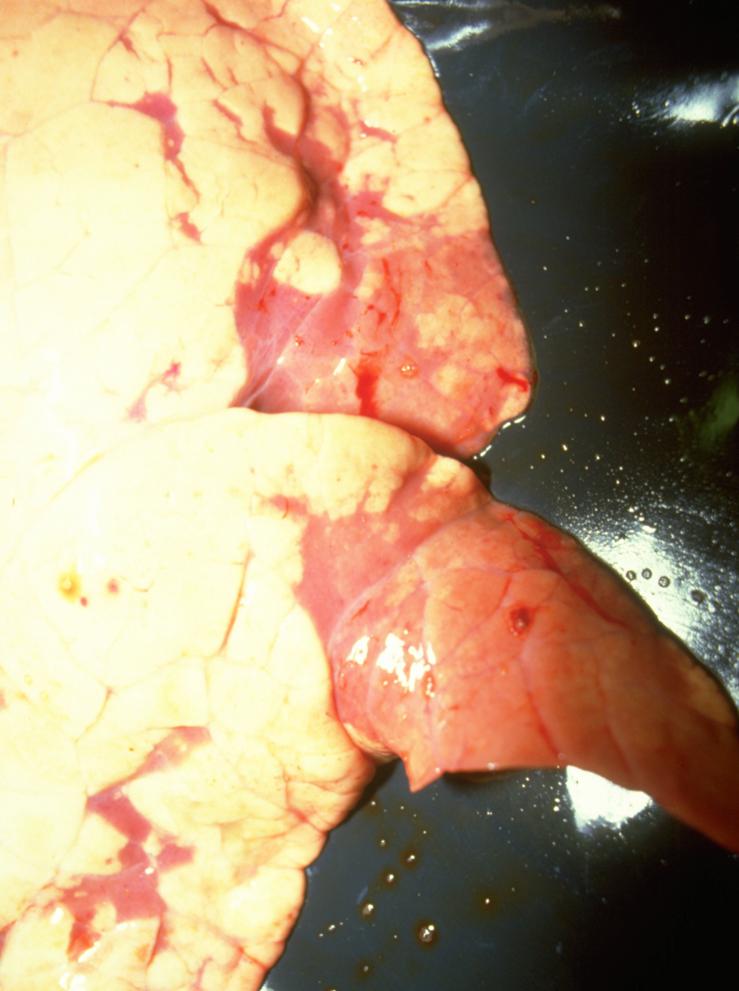 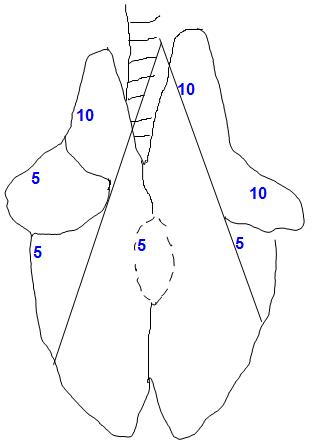 In its uncomplicated form the disease has a relatively mild appearance with a low grade dry non productive cough often the only sign.  In severe infection particularly in previously naïve populations more drastic signs including lethargy, high temperatures and inappetance can be seen.  The age groups typically affected are 8-20 weeks although initial infection will have occured earlier - there being a long incubation period between infection and clinical disease (typically 6weeks or so). Disease can be seen in adults that are not immune.  In breeding animals meeting the disease for the first time fertility can be severely compromised with failure to cycle and elevated returns to oestrous evident.

Growth rates will be compromised by SEP.  The most susceptible parts of the lungs are the front 4 lobes and the front tips of the main (diaphragmatic) lobe. 10% of this tissue damaged by SEP will depress growth between 30 and 90kg by approximately 40gm/day.  In a herd even moderately affected by the disease, suppression in growth of double this is common.

The most significant clinical effect of SEP is to "open the door" to secondary pathogens that can cause the severe compromised pneumonic pig seen commonly on infected farms.  Pasteurellas and Streptococci are common secondaries but it is also possible for Mycoplasma to exacerbate the effect of PRRS virus in the lung.  SEP and Swine Influenza will often co-exist and be additive in their effect on the pig.

Furthermore, this association with complicating viral respiratory pathogens is seen extensively in Porcine Circovirus Associated Disease (PCAD) (previously referred to as PMWS).  These co-infections mean that any programme to control respiratory disease in a herd must take account of the full range of pathogens involved and not rely on treating or preventing only one.

In the herd known to be infected, diagnosis is simply achieved by clinical inspection.  A measure of the levels of disease can be obtained by examining batches of pigs at slaughter and measuring the levels of damage in the lungs of 30-50 pigs.  The lesions seen are plum coloured, fading to reddish grey as they age, and solid, as shown in fig 2.

In herds not known to be infected, the disease can be confirmed by examination of the affected lung tissue by histopathology and PCR testing.  Culture of the organism whilst possible is a highly specialised technique and frequently unsuccessful.

PCR testing can also be done on nasopharyngeal swabs but these are highly sensitive tests and should only be applied on the farm affected; they can easily give false positive results if pigs are tested in the abattoir, due to cross contamination.

A blood test exists for the detection of antibodies to M. hyopneumoniae and, whilst false positive results can occur in individuals, it can be used to confirm the presence of the organism within a population.  Conversely, seroconvention takes many weeks following infection and testing too early can give false negative results.

Treatment of groups or individuals clinically affected is with appropriate antibiotics.  Tetracyclines, Lincomycin and Tiamulin are highly effective against the organism but often alternatives are needed to treat individuals due to the mixed infection involving secondary bacteria that frequently occurs.  Critically important antibiotics such as fluoroquinolones and 3rd/4th generation cephalosporins should be avoided.

Long term medication via the feed has historically been needed in finishing pigs to suppress the disease, although better methods of control are now available, and feeding antibiotics to growing pigs over a long period to simply repress disease is not considered to represent responsible use and should be avoided.

Because SEP causes distinct changes in the lungs of slaughtered pigs it is possible to monitor the levels of disease over time by regularly assessing damage in the abattoir.  The '55' scoring system in which the percentage of vulnerable tissues affected are assessed and added up to give a total score out of 55 for each pig and batches of pigs assessed can give an average for the herd.  This scoring system is the basis of lung monitoring under the British Pig Health Scheme.

An individual pig with a score of less than 10 may have shown very limited clinical signs (despite suffering slowed growth) whereas above this level pigs will cough, have difficulty breathing and lose condition requiring individual treatment.

On a herd basis a 55 score of above 10 would represent a serious disease problem requiring active intervention to reduce the levels. Well-controlled disease in the presence of SEP would give a score of less than 3.

It should be noted that '55' scoring scheme is a guide to assessing SEP levels.  The damage (consolidation) seen at slaughter can be caused by other agents either alone or in association with SEP.

The organism has consistently been shown to have the ability to spread 3km (2 miles) on the wind and, as such, any herd free of SEP is vulnerable to infection not just from other established neighbouring farms but also from pigs passing on lorries etc.  People are able to carry the organism in the nose for 48 hours and are a potential source of infection.

Clearly infected pigs entering the herd will introduce SEP and for established herds introducing stock, an extended off site isolation period (6-8 weeks) is essential.  The blood test or nasal swabs could be used to screen pigs before removal from isolation.

Where the disease is present, control can be achieved by a combination of management and pharmaceutical approaches.

1) Do not overstock pigs and limit group sizes in an air space.

3) Separate age groups and operate an all in all out policy for buildings, rooms or even sites where possible. Failure to do this will ensure a continuous recycling of infection and disease from older to younger pigs that will maintain and exacerbate disease.

8) Strategically medicate pigs at danger times (e.g. following mixing and moving of accommodation) with appropriate antibiotics either via feed or water.  This is only acceptable as a short term approach to allow other interventions to be put in place and work their way through the system.

Highly effective vaccines available for direct administration to piglets as young as 3 days old have been available since the mid 1990s.  A range of products are available in either single or two dose formats to suit difficult management systems, preference and challenges.  There is no objective evidence to indicate that either single dose or double dose programmes are better - both can protect the pig through to normal slaughter weight even in the face of maternal (colostral) immunity.  Competition has reduced the price of vaccines by 50% since they originally appeared, making them highly cost effective.

A herd suffering SEP with a 55 score of 8-10 without major viral complication would be expected to see that score drop to 2 or less over 6-12 months following introduction of SEP vaccine.

The vaccine operates as a herd protection, reducing the overall level of lung lesions and disease It will not eliminate disease or prevent every pig from suffering some challenge.  As with all vaccines, correct handling, application and dosage are essential to success.

As a general policy it is advisable to avoid giving piglets more than one vaccine at a time (if other diseases also require vaccination) and this can present serious challenges to work out a programme to give control of multiple infections. The more recent availability of combination vaccines - such as M hyo + PCV2 has simplified this problem to some degree.

Due to the ability of Mycoplasma to spread on the wind, where pig density is high it is generally not feasible to remain free of SEP.  However, where units are geographically isolated, freedom from Mycoplasma can be desirable.  Eradication of the disease can be achieved either by herd depopulation/repopulation or by partial depopulation in combination with sow vaccination and medication programmes with antibiotics such as tetracycline/tiamulin combination or tilmicosin (Pulmotil:Elanco).  The veterinary surgeon can devise an appropriate programme for the farm.

There is currently some interest in area disease elimination where herds cooperate to "clean up" collectively.

A mild grumbling level of SEP producing a herd score of 5.5 will undermine growth to the tune of 40gm/day extending the finishing period by 4-5 days with its additional feed cost of £1.40 - £1.50.  Over a year such modest levels of disease can represent a loss of £16000 to a 500 sow breeder feeder farm.  Any treatments required are added to this. Cost of vaccination would be expected to be 25-30% of this disease cost.

All producers should monitor the disease by way of membership of BPHS whilst available and make cost based decisions on control policies with the help of such information.