Damage to the tips of the ears of the growing pig as a result of bacterial infection is frequently confused with aberrant behaviour in the form of ear biting.

Whilst primary infection can trigger later biting by pen mates, spontaneous ear biting itself is usually initially confined to the ventral margin of the ear (pinna) close to where it attaches to the head.

Ear tip necrosis (ETN) is a common finding in young growing pigs and although it does not appear to unduly affect the general health and growth of pigs, it is unsightly and should be viewed as a welfare problem that requires remedial action. 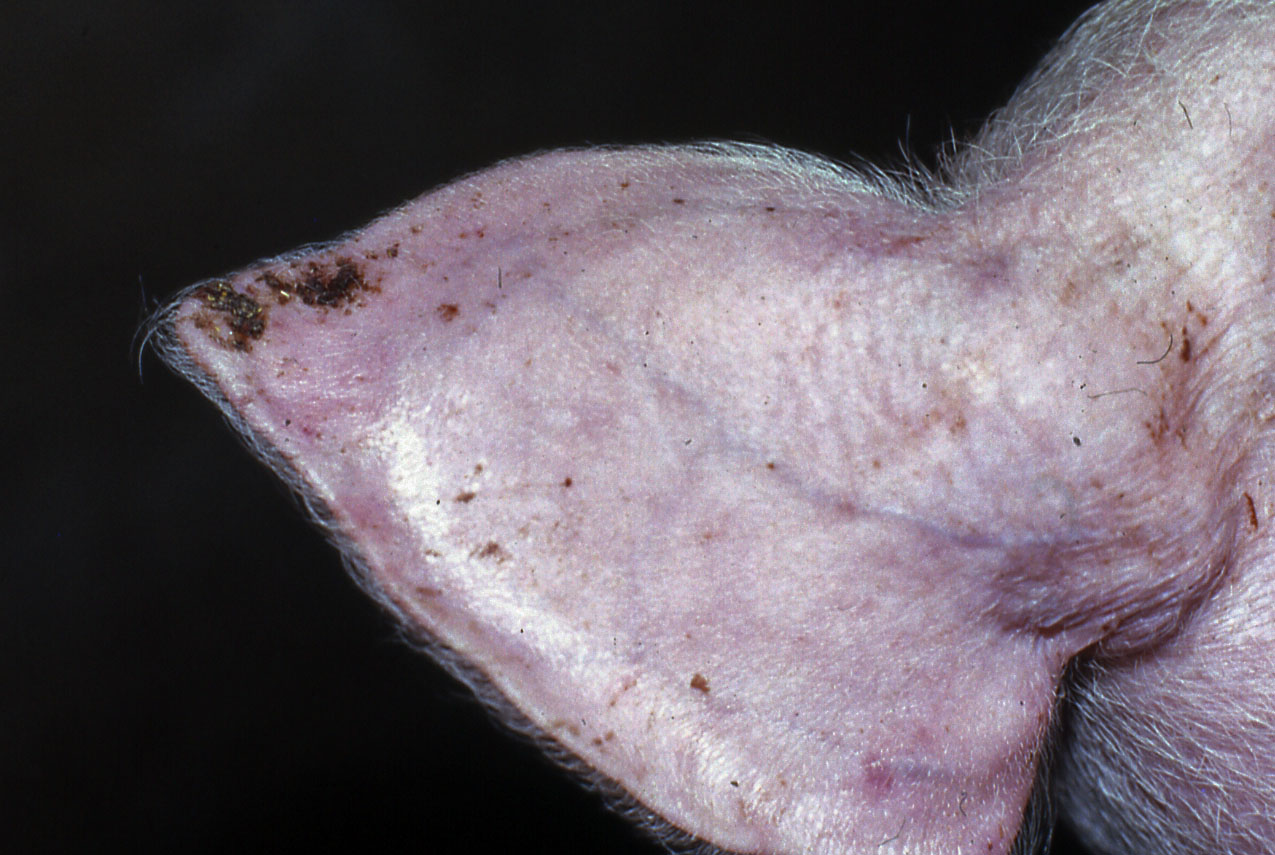 Fig 1: The earliest stage of ear tip necrosis is no more than a blackened area at the extreme of the ear tip. 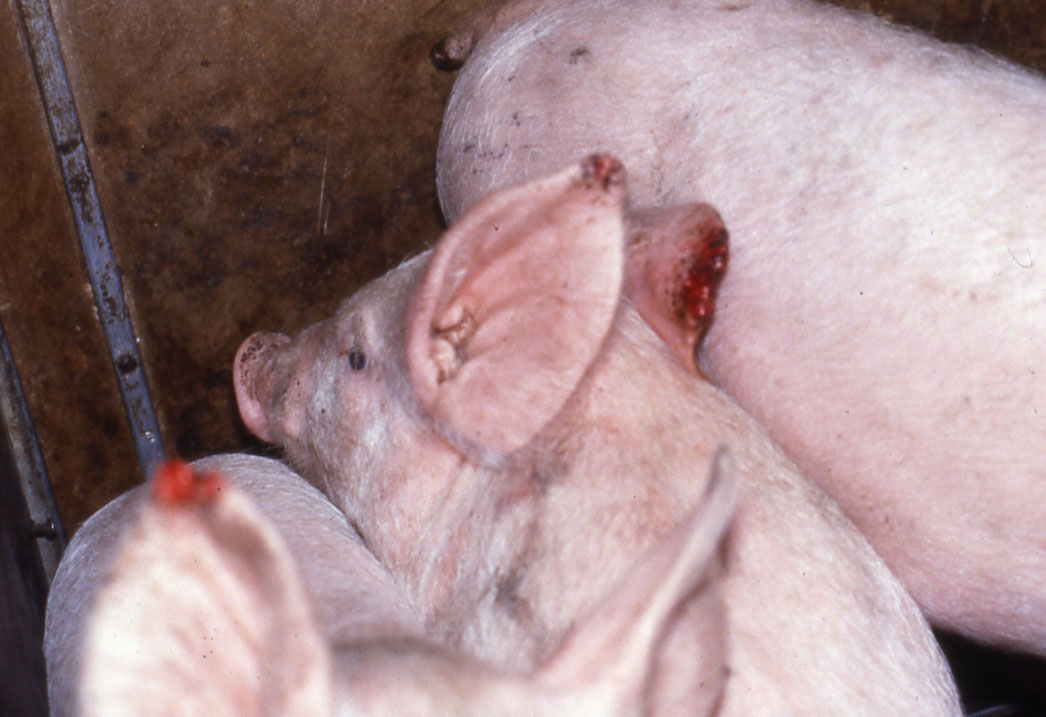 Fig 2: Active necrosis and bleeding, which can trigger ear biting. 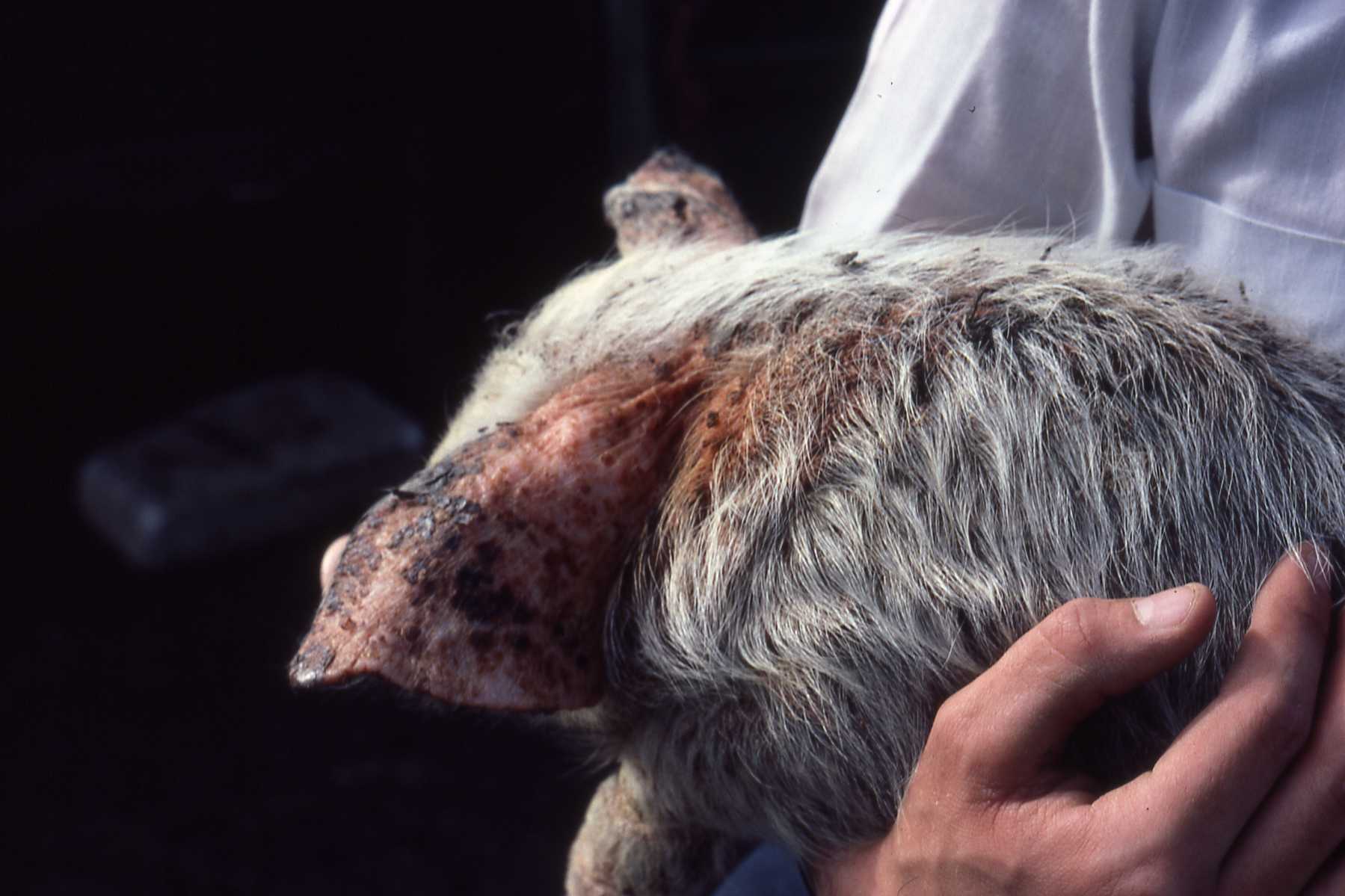 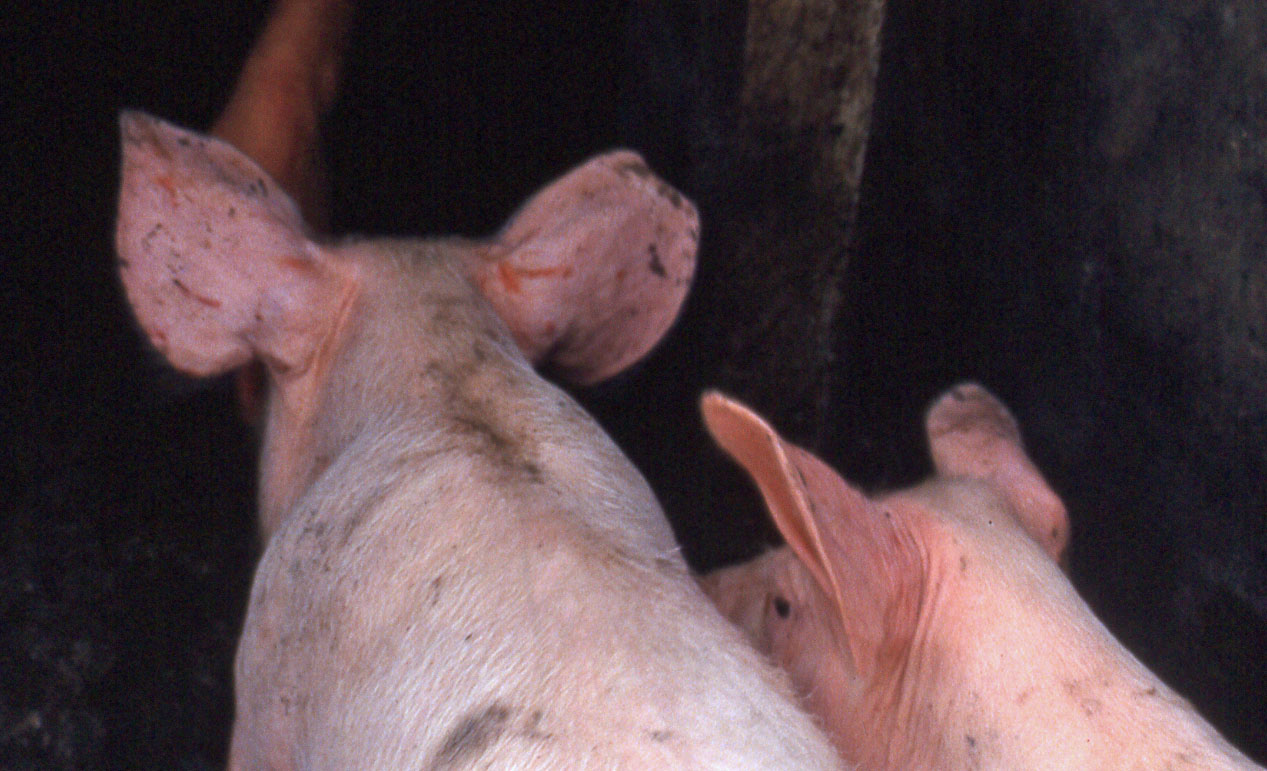 Whist more widespread bacterial dermatitis (Greasy Pig Disease) can occur at any age, ETN is quite specific in its age development. The earliest lesions are normally visible on the tips of the ears of pigs at 6-7 weeks old and are usually no more than a black greasy deposit (fig 1).  If this grease is scraped off, a small split or ulcer on the surface of the ear tip can be seen.  These are often very small but represent the point of access for bacteria that are present on the skin.

Over a matter of a few weeks the ear tip slowly erodes with a blackened edge which if knocked can bleed.  This may be attractive to pen mates who may then start to bite at the lesion, in which case swelling and reddening of the ear will occur.  If there is no secondary trauma, the erosion will slowly progress to the point where up to half of the earflap may have been lost.

At some point, usually above 14 weeks of age, the erosion will halt and the eroded surface will heal over, leaving a healthy crinkled edge to the ear.

Observations made of widespread outbreaks of ear tip necrosis reveal the following features:

Swabs taken from open eroding lesions may yield bacteria associated with their development.  Staph hyicus - the cause of Greasy Pig Disease (GPD) - is the most common isolate and in some outbreaks an earlier episode of classic greasy pig disease may have occurred inthe herd.  However, in other cases, Staph aureus - a common skin commensal - maybe found.  Other bacteria have also been implicated in specific cases or outbreaks.  There is no evidence to suggest that the disease can spread to man (i.e. it is not zoonotic).

It is speculated that the primary cause of the problem is damage to the tip of the ear either from fighting, knocking on feeders or abrasion against walls, pen divisions etc.  This allows access of bacteria, which can become "sealed in" under a greasy film that then allows bacterial multiplication.  It may be that the poor blood supply to this area limits immune reactions and in itself allows bacterial growth.  This leads to thromboembolic blockage of small blood vessels starving the tissue of oxygen and leading to tissue necrosis (or dry gangrene). It may also be the case that as the ear erodes away, the infection reaches areas with better blood supply allowing the immune reaction to fight the infection.

However, "drying up" of the lesions and healing often occurs following a move of buildings unrelated to the extent of the erosion.

Ear tip necrosis is often evident when other disease issues affect the pigs e.g. respiratory or enteric disease.  It has also been suggested that the lesions may involve Porcine Circovirus type 2 and occur as part of the wasting syndrome in young growing pigs, although this is unproven.

Experience over many years has shown that treatment and prevention of this condition can be very difficult.

Individual cases may often not warrant treatment, although where pigs are to be sold prior to resolution (e.g. weaner sales) it may be preferable to treat.  In feed medication has proved consistently disappointing.  Topical treatment with an antibiotic called Novobiocin in early stage cases proved highly effective at arresting lesion development when given as a single treatment.  This product, however, is no longer available in the UK.

Individual infection of affected pigs using antimicrobials to which the causative bacteria is shown to be sensitive and which penetrate well into the skin (such as Lincomycin or Florfenicol) can be effective but the cost of treatment must be considered carefully as it is often economically unjustifiable.  Tetracycline spray to the affected tips applied early may limit the progression of the lesions.

Where other disease is also occurring (such as pneumonia, colitis, ileitis etc) effective treatment of these conditions will often accelerate resolution of ear tip necrosis.

Specific actions to prevent ear tip necrosis have proved very difficult to formulate.  Clearly, control of co-existing disease (including PMWS) is a vital part of any herd health strategy and will help to minimise development of lesions. However, the widespread use of PCV2 vaccines to prevent this disease does not appear to have reduced the prevalence of RTN.  Similarly, autogenous staphylococcal vaccines have proved disappointing.

Minimising trauma to ear tips by attending to pen divisions and feed hopper design as well as reducing competition by increasing space provision and decreasing group size and use of deodorants may help.  Provision of high hygiene standards and fresh air may also help.

Washing/spray/dipping of pigs at weaning which can be highly effective in reducing classic Greasy Pig Disease, using Savlon or Virkon S, has not proved particularly effective at preventing ETN.

It is vital that where ear tip necrosis does occur, conditions are such as to minimise secondary vice (ear biting).  Again attention to stocking rates, avoidance of draughts, easy access to feed and water, provision of environmental enrichment (toys) and removal of affected pigs to hospital pens are all appropriate areas for consideration.

Finally, cleaning techniques for buildings should be addressed.  Given the age of pig at the start of a typical ear tip necrosis episode, there tends to be high levels of grease in the environment as a result of high oil levels in creep and starter rations.  This can form a protective cap over environmental contaminants and as such a detergent should be used prior to power washing/disinfection in first stage accommodation.  Sufficien contact tie is required to ensure the detergent is effective and this varies with produce used and temperature.  Also, particular attention should be given to areas often neglected during cleaning such as around and behind water nipples, which can act a reservoir for what is a quite resilient bacteria.