Colitis in growing pigs is often referred to as grower scours.  Its incidence increased dramatically in the early 1980's and there are suggestions that the incidence has further increased since the removal of antibiotic growth promoters (AGP's). On some farms some degree of loose dung has become accepted by many farms as normal. 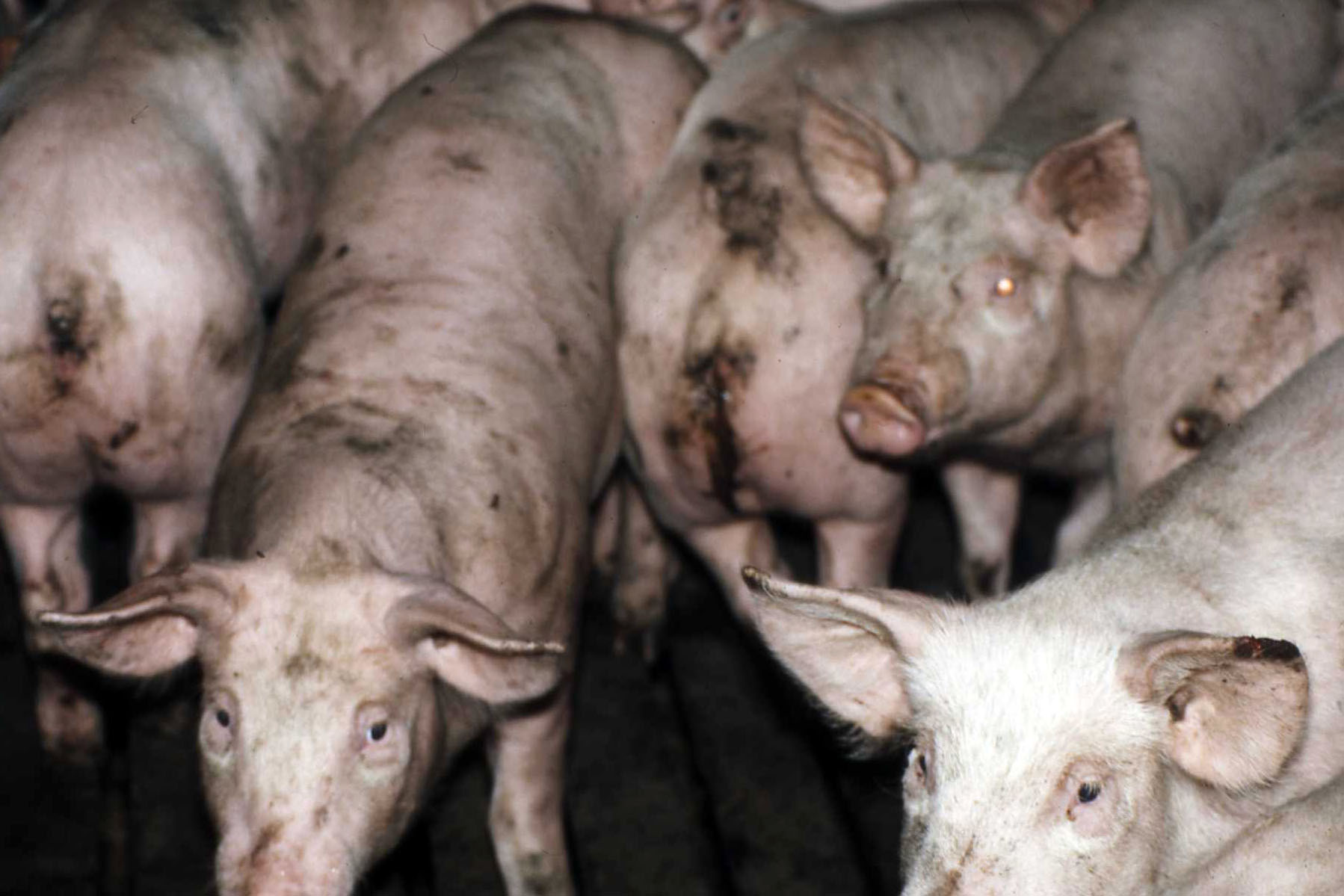 Fig 1:  Mild colitis with perineal staining and loose faeces but no loss of condition. 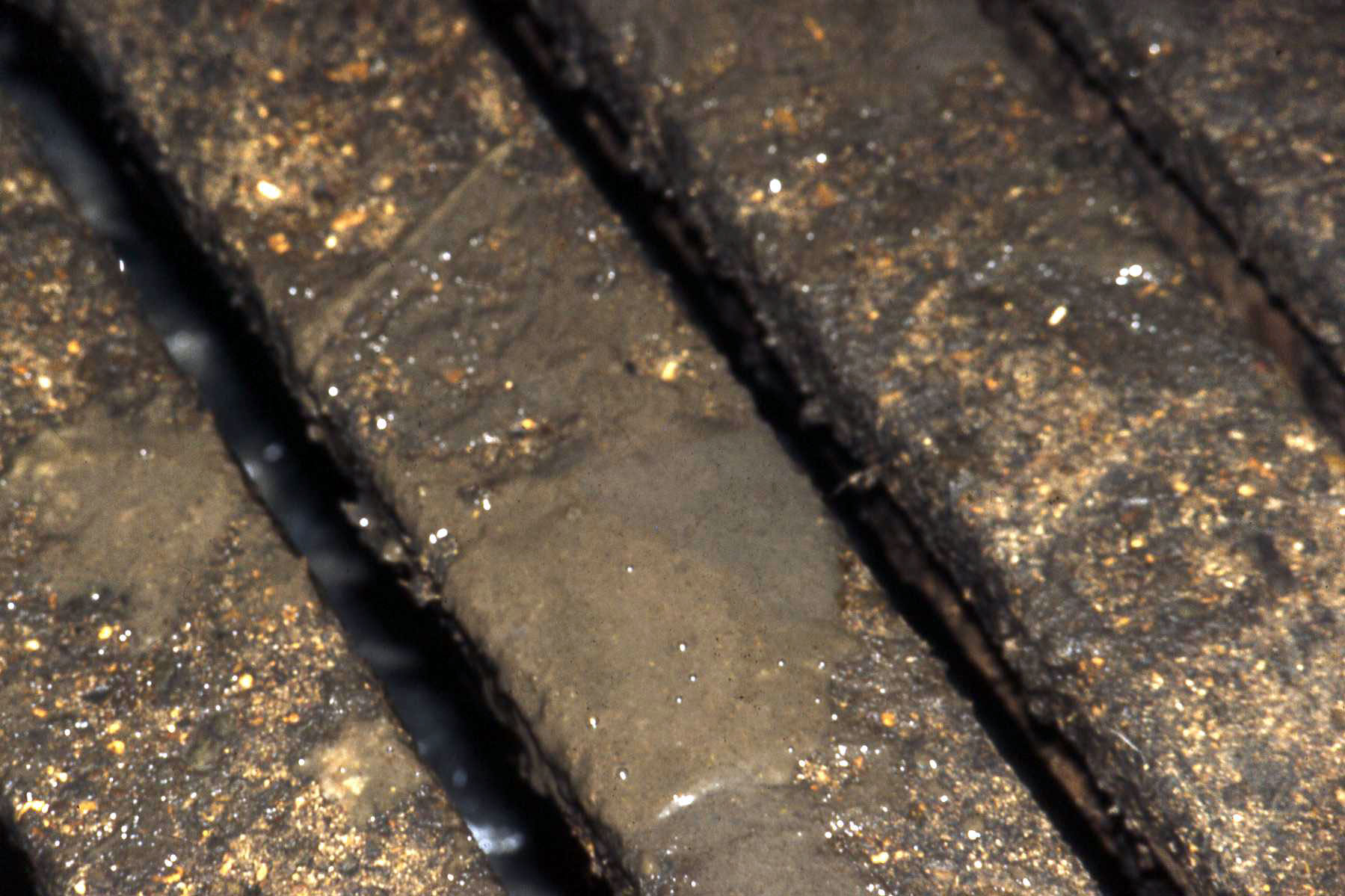 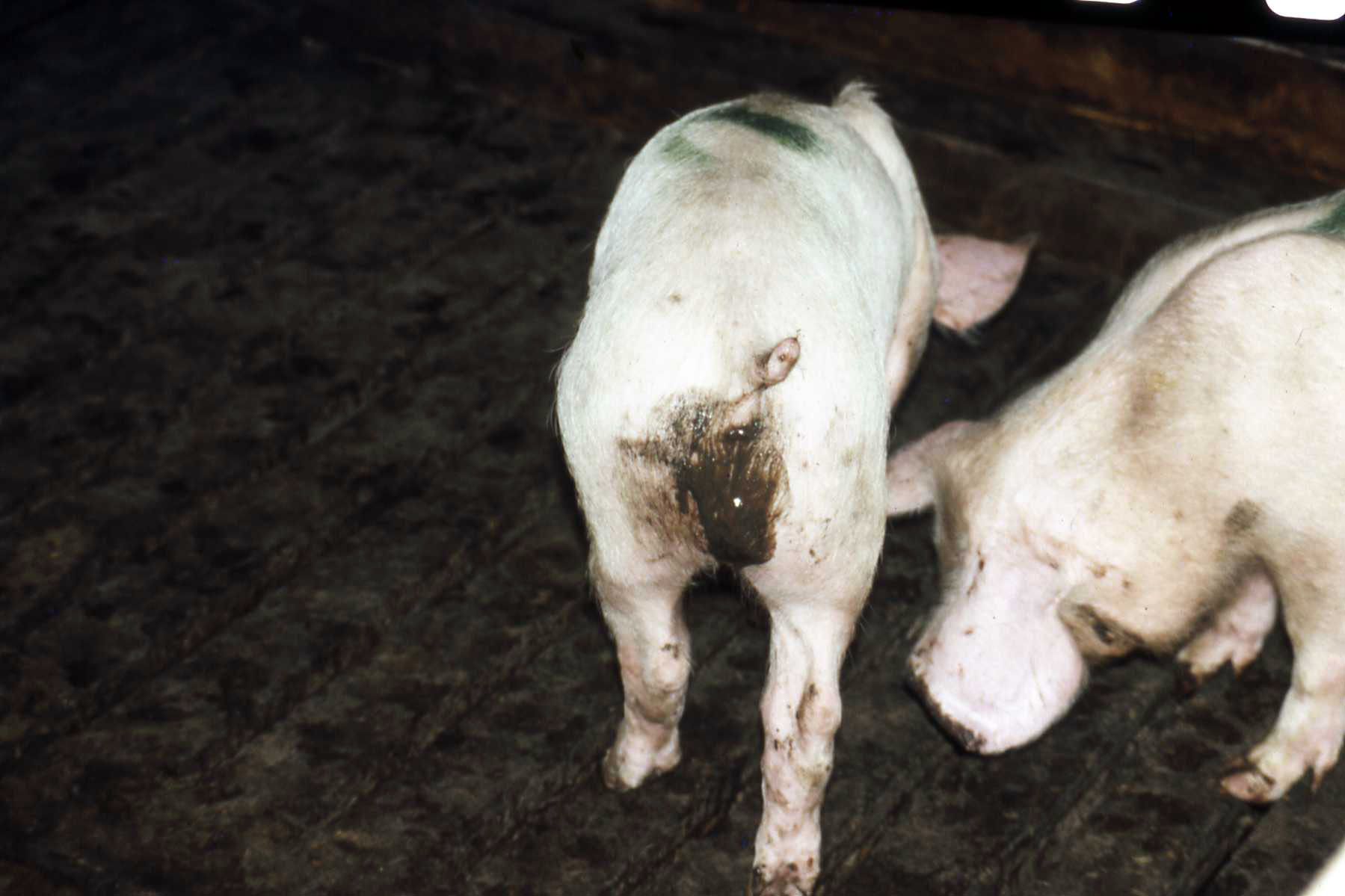 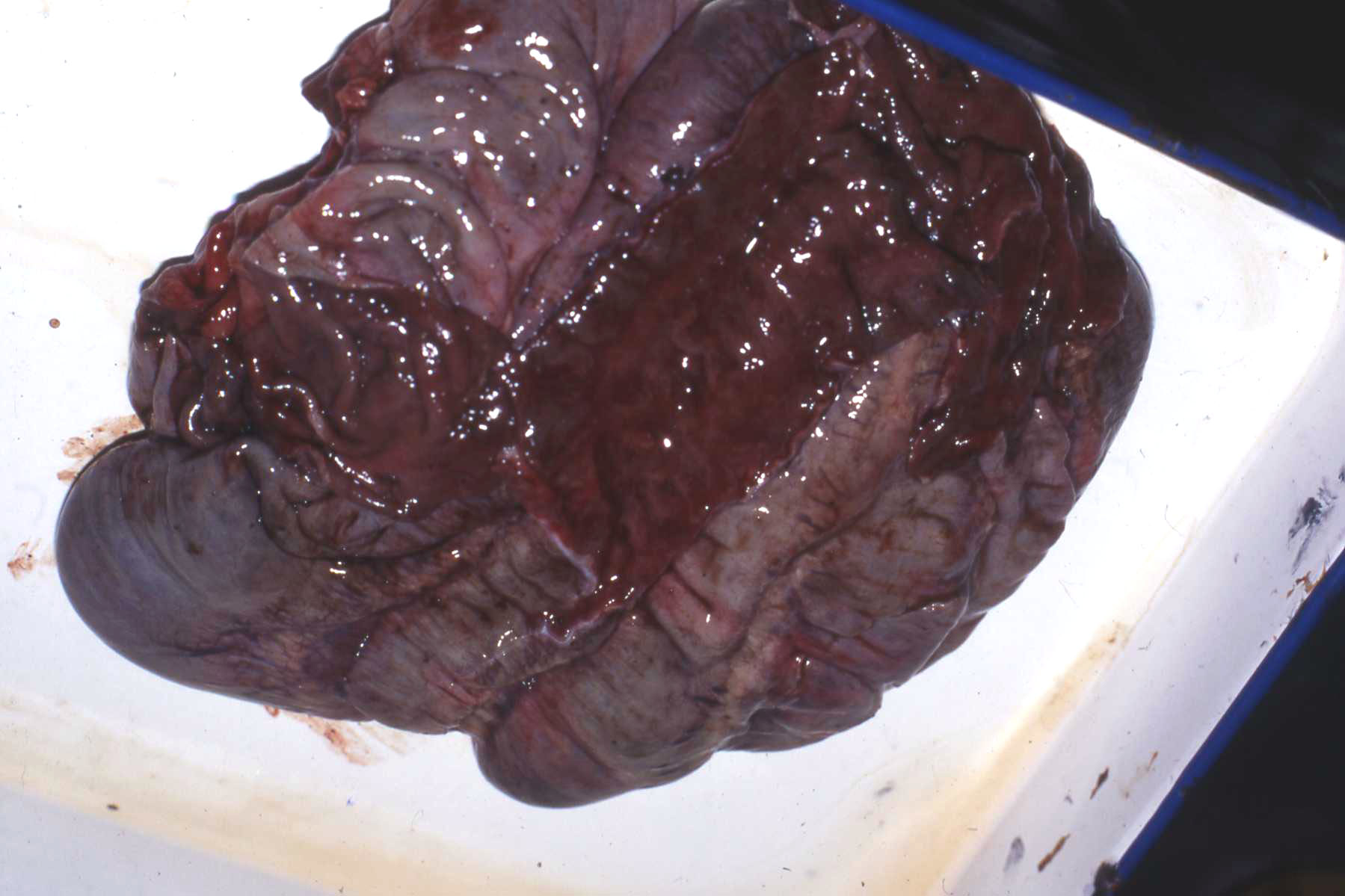 Fig 4:  Haemorrhagic inflammation of the colon (large intestine) as a result of Swine Dysentery

Colitis, technically, means inflammation of the colon (or large intestine), leading to dysfunction, and an increase in the water content of the faeces.  It may only take an increase of 2% water in the faeces to change it from a solid stool to a runny scour. Infectious causes include bacteria, viruses and worm parasites.

There are a number of specific causes of colitis and scouring in growing pigs:-

4) Infection with Lawsonia intracellularis = Ileitis (This is technically not true colitis - although the colon may be affected along with the lower small intestine, but the clinical signs may be indistinguishable).

5) Infection with Trichuris suis - the whipworm

In addition, once primary gut damage has occurred with any of these processes further commensal organisms can take advantage of the altered condition of the gut e.g. the protozoan Balantidium coli (it should be noted that E.coli is a small intestinal pathogen in young pigs and is not a significant component of the colitis syndrome).

The nutritionally induced scours - that generally are only diagnosed by a failure to detect a specific infectious cause - may be the result of:-

In the case of the first 2 scenarios, the development of disease is believed to be associated with the presence of non-starch polysaccharides (e.g. xyloses and arabinoses) in the cereal.  The molecules are not digestible by the pig unless chemically altered by heat (e.g. during pelleting).  In the altered state, they act like a sponge in the small intestine only to shed the water under microbial attack in the colon, thus overloading the large intestine with water.  The altered molecules act as a source of nutrients to the large intestinal flora, which will proliferate and exacerbate the gut dysfunction.

Non-starch polysaccharides are present in high levels in newly harvested barley (decaying over the first 4-6 weeks in store) and in certain varieties of wheat (at a stable level).

Typically, grower scours are recognised in pigs between 20 and 80kg, although the problem can be seen earlier and later in life.

The signs visible will depend on the causative factors, the degree of secondary invasion and the level of faecal recycling in the group and between groups.

The consistent sign is one of diarrhoea (scour) in a proportion of the animals, which can contain blood and mucous, particularly seen with Swine Dysentery, Whipworm infection and occasionally with Spirochaetal colitis.  Often the scour is just grey and watery.

Within a group, the consistency of the faeces will vary from solid stools, through "cowpats" to frank scour. Vomiting is not seen in enzootic colitis (but may occur in cases of Swine Fever, when clinical signs are multiple).

Severely affected individuals may show weight loss, hairy appearance, tucked in abdomen and general depression, although in many cases there is little clinical illness visible and the effects of the colitis may be only measurable by accurate routine batch or individual weighing of the pigs, demonstrating reduced growth rate.

Modern Polymerase Chain Reaction (PCR) tests - which detect genetic material fragments of microbes - are available to identify the different spirochaetes (Brachyspira sp) in faecal samples, and Salmonella can easily be identified in faeces by bacterial culture.

Ileitis and Trichuris are most reliably diagnosed at post mortem (both visually and by histopathology) - in growing pigs it can be difficult to identify worm eggs.  PCR tests for Lawsonia in faeces are also available.

In many cases, colitis of nutritional origin is diagnosed by elimination of the known pathogens listed.

Clearly, treatment will depend on the specific cause of the diarrhoea:-

a) Swine Dysentery and Spirochaetal colitis response most reliably to Denagard, Valnemulin, Lincomycin and Aivlosin.

b) Salmonellas would only be treated if causing significant illness and loss of production and then with antibiotics as indicated by sensitivity tests. Critically important antibiotics, such as fluoroquinolones and colistin, should be avoided wherever possible and then only as a last resort.

c) Ileitis responds rapidly to tylosin medication (along with tiamulin and lincomycin).

d) Trichuris suis is treated with in-feed wormers such as fenbendazole or flubendazole or by injection with one of the ivermectins.

i)  a change of feed

ii) a reduction in fed levels

iii) a change from pellets to meal form

As with any enteric (gut) disturbance, the key to long term control lies with hygiene measures.  Regular washing of pens between batches including disinfection, lime washing or burning is essential.  Avoidance of scrape-through dunging areas is necessary, operating buildings on an all in all out basis.

Where a specific infectious cause is identified, strategic medication either continually or on a pulse basis may be necessary. Zinc Oxide at high levels in feed can be effectively used but is only licensed for use in pigs up to 10 weeks old (at the time o writing - late 2016 - the use of ZnO at therapeutic levels is coming under threat from legislation and its use may be banned). Likewise, in an environment known to be contaminated with Trichuris eggs, strategic worming prior to clinical signs being seen is indicated.  An orally applied live bacterial vaccine for weaned pigs is available against Lawsonia and is useful where this infection alone is involved.

With nutritional scouring, dietary manipulation, switching to use of meal feeding and inclusion of specific enzymes (polysaccharides) can be effective.  Likewise, occasional antimicrobial medication can be useful to suppress secondary opportunist organisms on an empirical basis as advised/prescribed by the attendant veterinary surgeon. It should be stressed that in the farm situation it is highly unlikely that any one single cause will be relevant; most instances involve a cocktail of potential pathogens, hygiene and environmental issues and nutritional influences.

The inclusion of organic acids in feed is becoming increasingly popular as part of Salmonella infection control but in many cases the cost benefit is poorly defined.

As antibiotic use for pigs comes under increasing scrutiny, the use of alternative products such as organic acids, prebiotics and probiotics is becoming `more significant but in many cases these are applied on a suck and see basis with little evidential support. Mycotoxin binders are similarly liberally used with often indeterminate benefits.

One final comment is pertinent regarding the use of antibiotics in pigs. It is still common practice to administer routine injections of antibiotics at birth (to prevent neonatal scour, joint ill etc). The use of broad spectrum antibiotics in this way disrupts the development of the normal flora and fauna of the gut (now termed the microbiome or microbiota) and this can have effects on the pigs' digestive system well into the growing stages (There are reports in human medicine that excessive broad spectrum antibiotic use in babies may be linked to some of the serious and persistent gastrointestinal conditions that persist into adulthood). Routine use of antibiotics at birth is not deemed responsible use and should be avoided. In cases of non-specific colitis in growing pigs its use should always be addressed.

The costs to a herd of clinical scour in growing pigs can be highly variable and difficult to quantify.  Swine Dysentery is a persistent disease that even despite apparently effective medication - itself costing more than £2 per pig - can depress feed conversion efficiency of a herd by 0.5.  For a 300 sow breeding feeder farm taking pigs to 100kg with long standing Swine Dysentery the total costs can be as high as £12/pig or nearly £100,000/year making the herd completely unsustainable, requiring depopulation, cleaning and repopulation or mediated eradication.

In the mildest forms scour can impose an unmeasured penalty on efficiency of growth of 0.1 FCR and produce an uneven growth pattern throughout which can add £2/pig to cost of production.

Any control strategy, be it by medication, use of acids, vaccination or worming programme should only be undertaken once the actual cost of the disease to the farm is calculated, or at least estimated, and the causative agent(s) identified.