Piglet scour is one of the more commonly reported clinical conditions affecting pigs prior to weaning.  Many cases are not definitively diagnosed and the true incidence of disease specifically caused by Clostridia is unclear. However, as a group of bacteria they are capable of producing a widespread problem of varying severity.

Clostridia are a group of bacteria that are normally soil and faecal borne and which are capable of producing spores, which are highly resistant to environmental conditions.  They are responsible for putrefactive changes after death and are also associated with specific diseases such as Tetanus and Botulism.  Clostridium perfringens is one specific species that is associated with disease in baby pigs and there are several strains that can produce anything from a low grade scour at any age up to weaning, to a peracute haemorrhagic enteritis - usually killing the pig before scour is seen - in the first 24-48 hours of life. 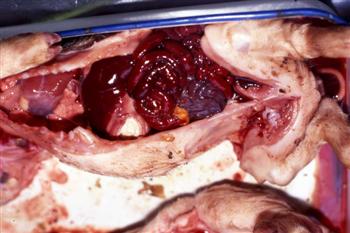 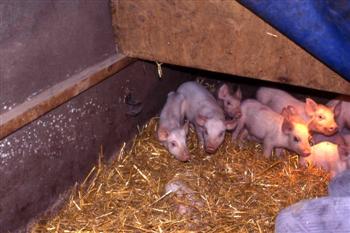 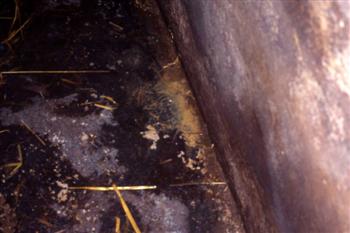 Fig 3: Pasty scour that could result from Cl. perfringens type A infection

The peracute form of the disease - usually associated with Cl.perfringens type B or C - can be seen either sporadically in occasional litters - particularly those on gilts - or as a major epidemic.  Frequently, it will present as a number of piglets found dead, in some cases the whole litter.  The disease is far more likely to occur in outdoor conditions, although there is a common fallacy that it will only occur on land that sheep have occupied previously.  The organisms are soil borne and thus can be present anywhere.  The link with sheep is simply that this species is particularly vulnerable to clostridial infections and will tend to multiply the organism.  The disease is also seen sporadically in indoor farrowing set-ups.

At post mortem examination, the whole of the intestine will be an intense red colour and the gut filled with bloody content (fig 1).  The rest of the carcass will be pale but there will be no evidence of haemorrhage outside of the gut.  The changes seen are associated with toxin production from the bacteria and the type of toxins produced varies between the different strains.  These toxins can be identified by laboratory tests and are used to identify the strain of the bacteria

In recent years, a less severe form of Clostridial disease has been increasingly recognised in the sucking pig, usually associated with Cl. perfringens type A but occasionally with either type B or C.  This presents as a pasty scour, anything from a few hours old right up to weaning and is indistinguishable from scour caused by E coli, Rotavirus, Coccidiosis etc depending on age, although disease caused by the former two organisms can be profuse and watery.  It can only be diagnosed in the laboratory by a combination of toxin testing and histopathology.  This form of the disease has a low mortality, high morbidity and can have a serious effect on the weaning weight of the pigs.

Clearly, the peracute form is untreatable in that pigs are found dead.  Where it is known to be a risk, piglets can be treated metaphylactically at birth with long acting Amoxycillin by injection as a single dose.

Cl. perfringens type A infection can be treated with penicillin based antibiotics supported by electrolytes but where very early disease occurs, this can be very difficult - pigs often scouring before treatment can be given. Probiotics (including yoghurt) are used in piglets to reduce scour with variable effects.

As with all infectious diseases, prevention must be the aim.  In the indoor environment, hygiene is vital but fire (flamegun) or lime washing may be needed to kill the spores. Great care is needed with both due to fire risk and the scalding effects of lime on the pigs if it has not been left 4 days to cure. Washing of heavily contaminated sows with soap and watervmay be appropriate prior to entry to farrowing.  Where farrowing pens lie wet, the generous use of bedding possibly in combination with dry disinfectants can be very effective.

Outdoors, on infected land, a vaccine programme can be used to control Cl.perfringens type B and C.  It would be normal practice to vaccinate the new outdoor herd for these diseases as a routine with constant review as the herd matures.  Either a stand alone Clostridial vaccine (Heptavac/Lambivac:MSD Animal Health) or a combined E coli/Clostridial vaccine can be employed (Gletvax6:MSD Animal Health/Suiseng :Hipra) with 2 doses of vaccine required as a primary course in gilts prior to farrowing, a single booster is required prior to subsequent farrowings.  Clostridial vaccine would only normally be introduced into the indoor herd where a problem is known to have occurred although the E coli/Clostridium perfringens combination vaccine covering types B, C & D is widely used.

Unfortunately, Cl.perfringens type A is not included in any pig vaccine currently available in the UK, although some cross protection from other strains is often claimed. Specific type A vaccines are available in the USA and are very effective in specific problem herds and it may be possible to import them under a Special Treatment Authorisation (STA) which is farm specific. Alternatively, Covexin 10 (MSD Animal Health) which includes Type A protection can be used off licence under veterinary prescription where this strain is implicated.

Outdoors, hygiene is more difficult to manage but the burning of bedding under DEFRA licence is useful to break the cycle of disease.

A word of warning regarding feedback. The controlled exposure of gilts and sows in late pregnancy to scour and infected material is a well-established and frequently highly effective method of stimulating immunity and therefore controlling scour, acting as a very crude form of vaccination.  It is particularly effective for viral scours. However, feed safety regulations restrict its use and it should only be performed in diagnosed disease situations where alternative control methods fail or are not available, and only based on veterinary advice. Details of the procedure can be found at www.pvs.org.uk.  Care should be exercised in the face of Clostridial infection.  Feedback material should never be given to the pregnant animals less than 75 days gestation (subject to veterinary advice) and normally would be offered from 80-110 days.  In practice, it seems that providing material to sows in late pregnancy where Clostridial disease is known, can actually increase problems, possibly by increasing excretion from the sow.  For this reason, it should be avoided as a control method for Clostridial disease and in mixed situations only used with care, under veterinary direction.

The cost of Clostridial scour is highly variable and will depend upon the strain involved, the duration and severity of an outbreak and the ongoing cost of preventative medication.

b)     600 sow Breeder Feeder farm with low grade grumbling Cl. perfringens type A disease causing no increase in mortality but reducing weaning weight at 25 days by 1kg/pig and lasting for 6 months.

In both scenarios the welfare cost to the pig must also be considered.