Clostridia are a group of bacteria of which there are a number of species that can cause disease in pigs.

In all cases the bacteria have a number significant features:-

1)  They produce spores which survive in the soil for years

2)  They proliferate in the absence of oxygen

3)  Each produce toxins which lead to specific diseases

In the pig we are particularly concerned with four species of Clostridia although with one there are a number of subtypes:

All are of particular relevance to more extensively kept pigs.

Sheep are particularly susceptible to a range of clostridial infections but disease in pigs is not confined to animals kept with sheep nor vice versa although the presence of the two animal species together increases risk of disease.

Clostridium perfringens is one specific species that is associated with disease in baby pigs and there are several strains that can produce anything from a low grade scour at any age up to weaning, to a peracute haemorrhagic enteritis - usually killing the pig before scour is seen - in the first 24-48 hours of life.

The classical peracute form of the disease - usually associated with Cl.perfringens type B or C - can be seen either sporadically in occasional litters - particularly those on gilts - or as a major epidemic.  Frequently, it will present as a number of piglets found dead, in some cases the whole litter.  If they are spotted alive a bloody (haemorrhagic) scour may be seen. The disease is far more likely to occur in outdoor conditions, although there is a common fallacy that it will only occur on land that sheep have occupied previously.  The organisms are soil borne and thus can be present anywhere.  The link with sheep is simply that this species is particularly vulnerable to clostridial infection and will tend to multiply the organism.  The disease can be seen sporadically in indoor farrowing set-ups.

At post mortem examination, the whole of the intestine will be an intense red colour and the gut filled with bloody content (fig 1).  The rest of the carcass will be pale but there will be no evidence of haemorrhage outside of the gut.  The changes seen are associated with toxin production from the bacteria and the type of toxins produced varies between the different strains.  These toxins can be identified by laboratory tests and are used to identify the strain of the bacteria. 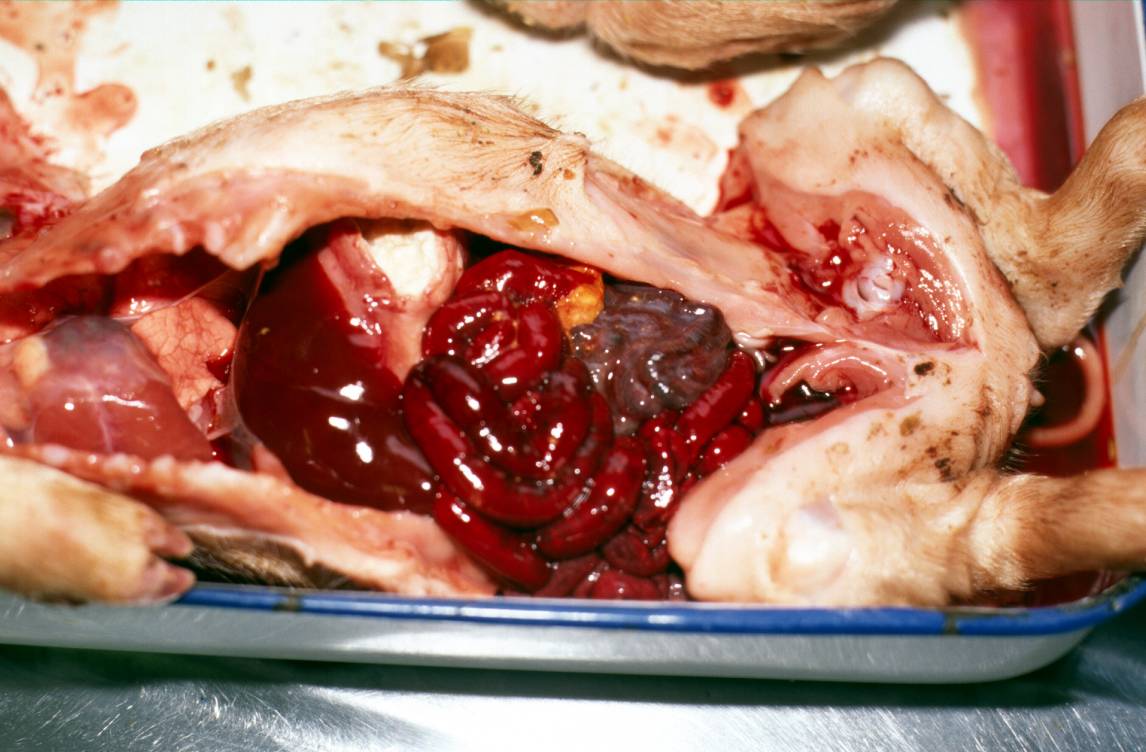 In recent years, a less severe form of Clostridial disease has been increasingly recognised in the sucking pig, usually associated with Cl. perfringens type A but occasionally with either type B or C.  This presents as a scour, anything from a few hours old right up to weaning and is indistinguishable from scour caused by E coli, Rotavirus, Coccidiosis etc depending on age.  It can only be diagnosed in the laboratory by a combination of toxin testing and histopathology.  This form of the disease has a low mortality, high morbidity and can have a serious effect on the weaning weight of the pigs.  On some farms, it may be restricted to a problem in gilt litters. 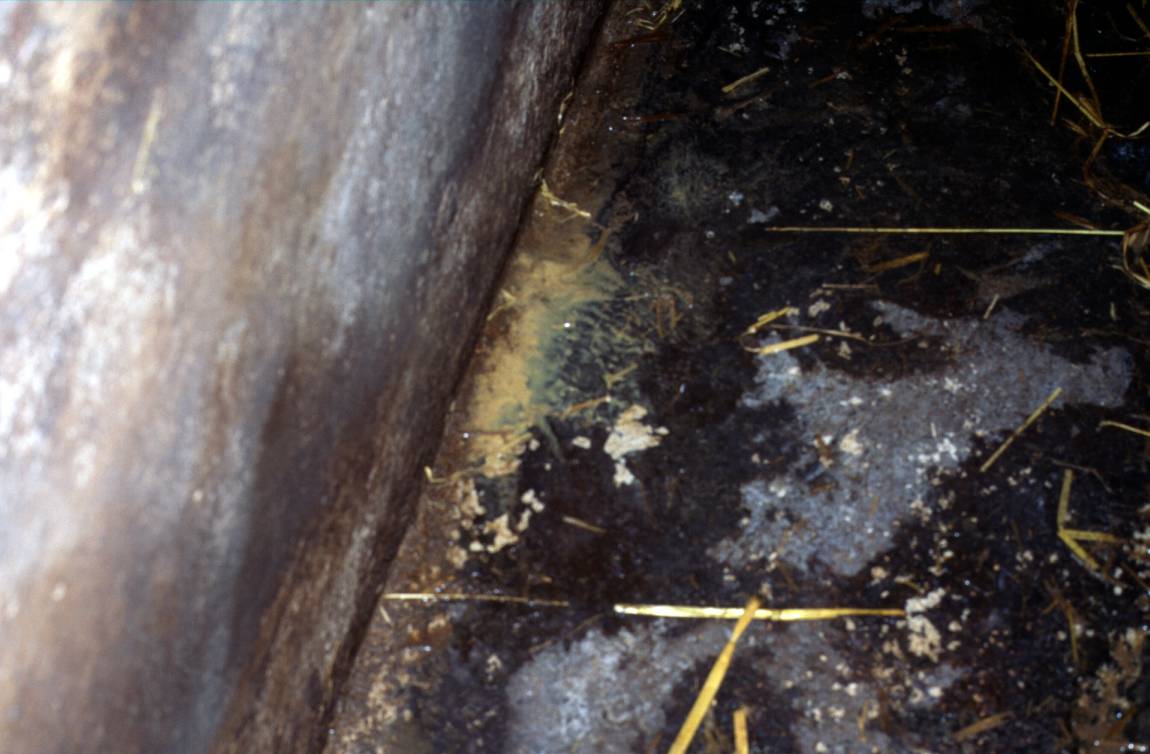 Clearly, the peracute form is untreatable in that pigs are found dead.  Where it is known to be a risk, piglets can be treated at birth with long acting Amoxycillin by injection as a single dose. Treating the sow pre-farrowing is ineffective. Treatment at birth should never become a long term approach.

Cl. perfringens type A infection can be treated with penicillin based antibiotics supported by electrolytes but where very early disease occurs, this can be very difficult - pigs often scouring before treatment can be given. Whilst fluoroquinolone antibiotics are highly effective, they are regarded as being critically important in human medicine and their use in the veterinary field is restricted to last resort status and only if supported by evidence that alternatives do not work. The veterinary surgeon will prescribe accordingly

As with all infectious diseases, prevention must be the aim.  In the indoor environment, hygiene is vital but fire (flame gun) or lime washing may be needed to kill the spores.  Washing of heavily contaminated sows may be appropriate prior to entry to farrowing.  Where farrowing pens lie wet, the generous use of bedding possibly in combination with dry disinfectants can be very effective. 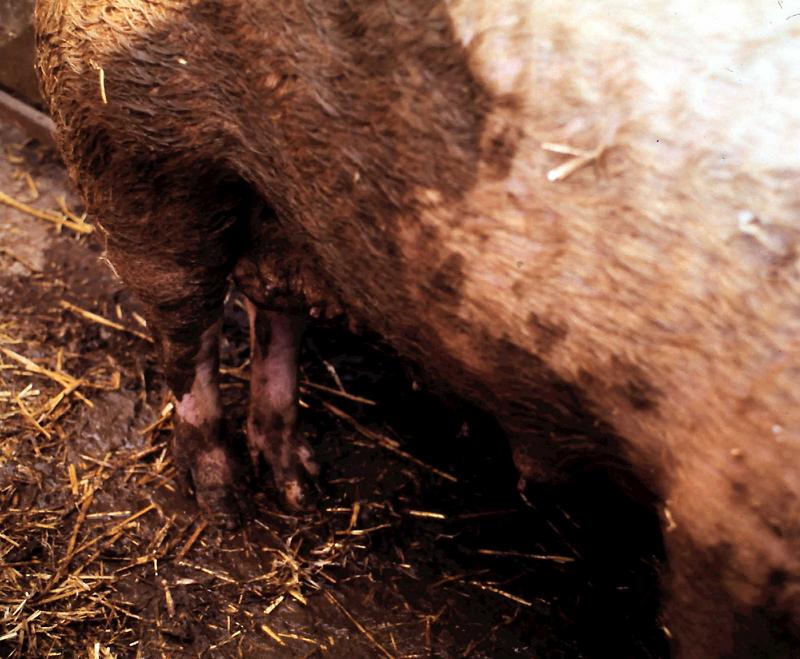 Outdoors, and in smaller extensively kept populations, a vaccine programme can be used to control Cl.perfringens type B and C.   Combined E coli/Clostridial vaccines can be employed with two doses of vaccine required as a primary course in gilts prior to farrowing and a single booster dose required prior to subsequent farrowings.  Other bacterial vaccines are marketed but are not licensed for use in pigs and should only be used under veterinary prescription when fully licensed products are not available.

Unfortunately, Cl.perfringens type A is not included in any pig vaccine currently available in the UK, although some cross protection from other strains is often claimed.  A specific type A vaccine is marketed for cattle can be used under veterinary prescription where this strain is implicated.  In either case vaccination of the sow prefarrowing protects the piglets.

Clostridium novyi is one of a group of Clostridial organisms that are usually present in the gut of the pig and are responsible for decomposition of the carcass following death.  Other bacteria in the group can be responsible for gas gangrene.

For reasons that are not e­ntirely clear in some individuals the organism migrates up the bile duct into the liver where it multiplies and produces very powerful toxins, which then destroy the liver in the living animal.  Death soon ensues.  The bacteria only grow in the absence of oxygen and it may be that certain other diseases act to reduce oxygen tension in the liver and predispose to multiplication.  Both pneumonia and enteritis may do this. Sudden feed changes have been implicated in some outbreaks

There are a number of key features in a carcass that has resulted from Clostridium novyi infection.

1.  Very rapid decomposition.  Within hours the body will be discoloured (green to purple) and gas will have formed under the skin to distend and distort it.  Foul smelling discharge may be seen from the nose and anus.

2.  On post mortem examination decomposition will be advanced but in particular the liver will be altered.  It will be enlarged, discoloured, crumbly and full of gas such that when cut the tissue has the appearance of "Aero" chocolate.  There will often be obvious enteritis in the small intestine.

Laboratory tests in the liver can be used to help confirm the diagnosis. 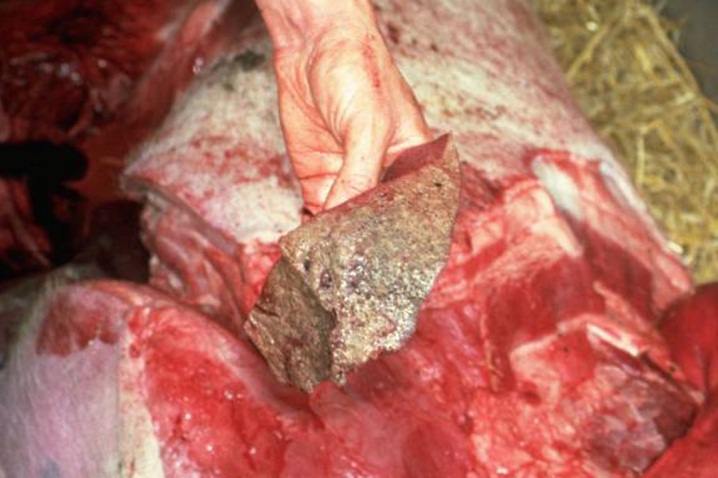 In general this disease has a sporadic nature with, usually, only odd animals affected.  It seems to be more common in summer and in sows tends to occur mostly in late pregnancy or lactation, which may be times of low liver oxygen levels.  Occasionally outbreaks of the disease will be seen in fattening pigs - particularly in more extensively kept groups.

The key to control is an accurate diagnosis that can only be achieved by early veterinary post mortem examination.

Where the problem is confirmed as a sporadic cause of losses in the breeding herd, it is possible to vaccinate sows although this must be carefully costed out and a programme put together to provide the best protection for the herd concerned.

None of the Clostridial vaccines providing protection against Cl novyi currently available are licensed in pigs and can only be used off licence under veterinary direction.  It is very rare to need to use such vaccines for this purpose in the small herd.

Tetanus is most frequently seen in young pigs kept outside, usually as a result of wound contamination.  Castration wounds in young pigs are a particular risk.

The organism produces a powerful neurotoxin, which leads to rigid contraction of the muscles (Its common name in man is lockjaw). 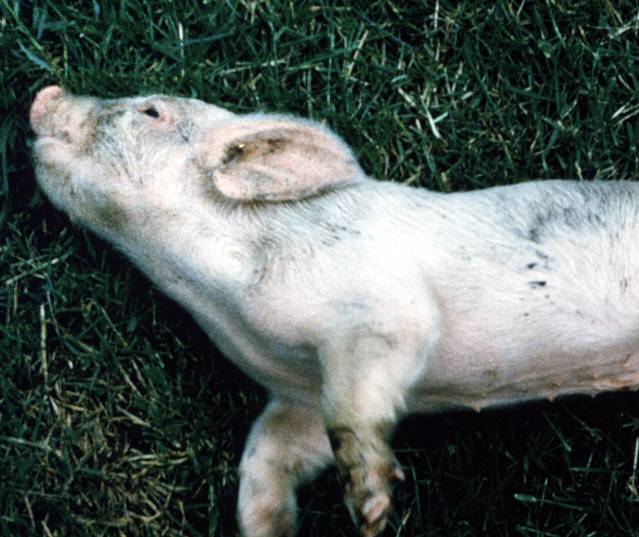 Fig 5:  Tetanus in  the young piglet

In the pig it presents as collapse with tetanic spasm of the muscles, the head held up, the ear tips maybe curled, all four legs held out backwards and the tail upright.  Death usually comes from asphyxiation as the respiratory muscles become paralysed (Fig 5).  It must be distinguished from meningitis.

The disease tends to occur on known infected ground and where such risk occurs piglets should be removed for 48-72 hours after castration to allow wound closure.  Where castration occur a clean technique is vital and the younger the piglet the lower the apparent risk of tetanus. The disease is not restricted to ground shared with or previously occupied by sheep.

In high risk situations vaccination of the sow using off licence multivalent vaccines is appropriate and can be part of the overall strategy.  This can only be done under veterinary direction. Alternatively, tetanus antitoxin can be given at castration but costs and logistics make off license use of TAT unpopular.

Botulism in pigs is rare and where seen is usually the result of pigs having access to rotting vegetable material.  Poultry litter that is composting may also be a source of contamination.

Botulism is a paralysing toxin with flaccid paralysis and rapid death for asphyxia in the pig.  Avoiding pigs having access to decomposing material easily prevents the disease.

Clostridial bacteria can cause a range of diseases in pigs.  In all cases the organism contaminates the ground either outdoors or in yards and persists.  As such they are a particular risk to pigs kept in more extensive conditions and for niche markets where castration is still necessary and where vegetable waste feed materials are fed.