Poor fertility costs money - the average loss in the UK is around £180 per cow or 3p/litre.

Effective fertility management is thus a key component of profitable dairy farming. Such management requires regular, accurate evaluation of the fertility status of the herd. This should take place at least twice a year in all-year-round calving herds.

To evaluate fertility status properly, requires records - at a minimum calving, AI / service and culling dates, alongside pregnancy testing results. These records allow the calculation of fertility measures which can be used to identify problem areas and to benchmark the farm against expected levels. Each measure has its own advantages and disadvantages so, when benchmarking fertility, usually a range of measures is used.

This is the percentage of inseminated cows which are not inseminated again for a set period - usually between 30 - 60 days, often 49 days as this covers two potential heats. It is an estimate of the proportion of cows that get pregnant to each insemination.

Inaccurate - relies on heat detection. Often more than 30% of the cows which are not inseminated again are actually not pregnant 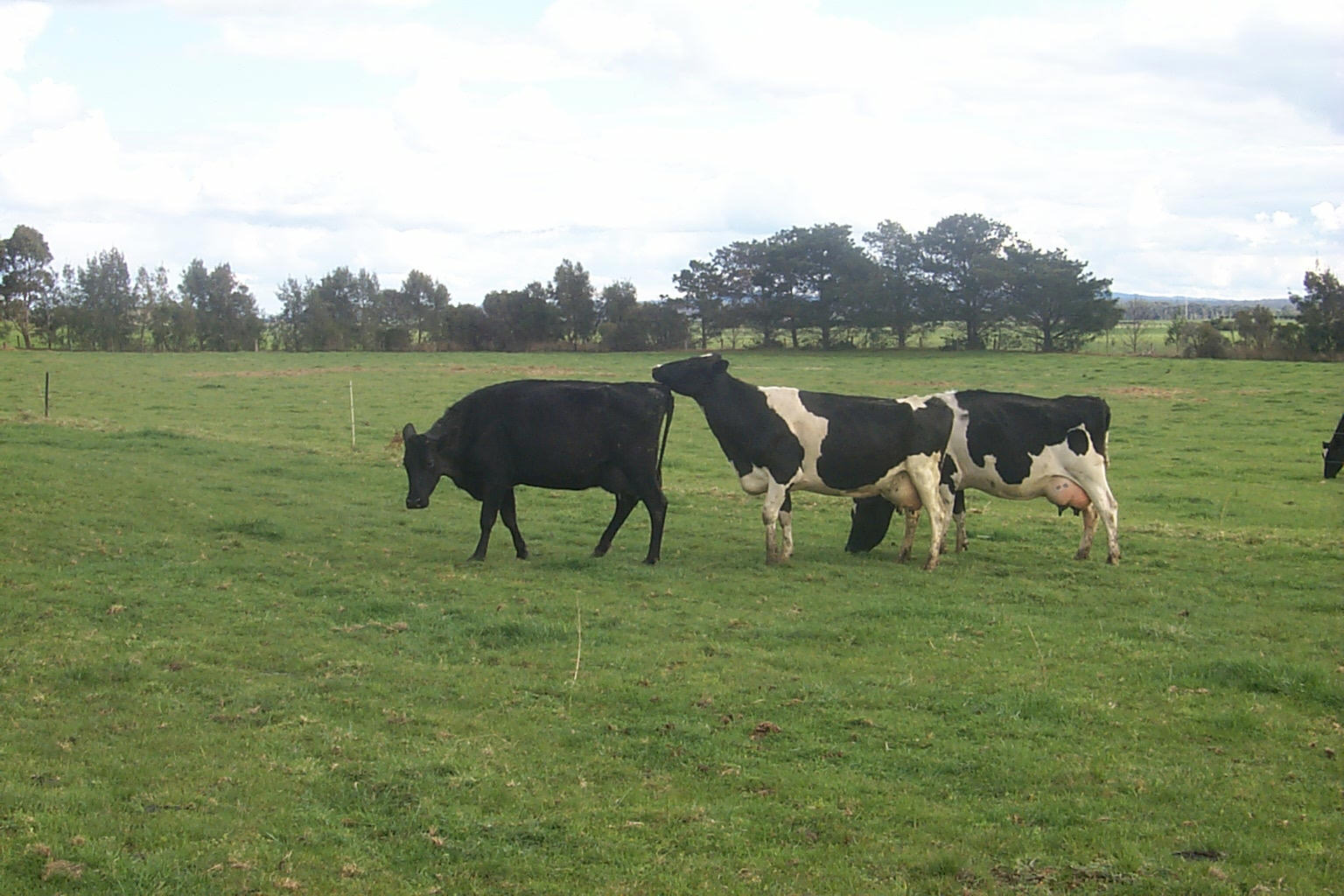 Fig 1: Records of when cows are seen in heat can provide valuable information even if cows are not served

This is the average time from calving to successful insemination. It is dependent on two underlying measures - how soon after calving cows are inseminated and the proportion of cows that get pregnant to each insemination. An increase in the former will increase CCI as will a decrease in the latter.

Days open is a similar measure that includes days from calving to culling or death for those cows which do not conceive.

Accurate - based on a positive diagnosis of pregnancy

Simple figure - easy to understand and fits into yearly planning

A CCI of 85 days results in one calf per year. In seasonal herds this should be the target. In higher-yielding non-seasonal herds a target of 95 days is more reasonable

This is the average time from calving to first insemination. It is a major factor in CCI; most herds with a poor CCI will also have a long interval to first service.

Management-related - Breeding policy is key. The voluntary waiting period, i.e. the time between calving and when a cow is eligible to be served for the first time, can be dependent on factors such as age and milk yield which are not directly fertility related

This is the percentage of served cows which become pregnant. This needs to include cows which are culled after service. It is usually expressed as a %pregnant per service. So, if 100 cows receive 170 inseminations over a 12 month period and 85 become pregnant then the pregnancy rate is 50% (85/170*100). Conception rates to specific services can be calculated for specific services - commonly the first service pregnancy rate is determined.

Accurate - based on confirmed pregnancies

Good records - all services need to be recorded, not just the most recent

Missing data - No account is taken of presentation for AI. You can have very good pregnancy rates but poor fertility because not enough cows are presented for service

Pregnancy rates > 50% are achievable, but many farms struggle to maintain averages > 40%. Conception rate is probably the hardest fertility measure to improve, so any strategy to increase it should not expect rapid improvement

Identifying cows in heat better is the area where management can have the most impact on fertility. Estimating the quality of oestrus detection and identifying areas for improvement is essential. Unfortunately there are no measures that simply and accurately assess heat detection.

Since cows are now showing signs of oestrus which are less intense and of much more shorter duration than used to be the case, especially as these periods tend to occur at night, it can be difficult to discover if oestrus periods do in fact take place and are just not being observed, or if the cows are not actually cycling at all.

One useful measure of heat detection is the calving to first observed oestrus. A target of 80% seen in heat before 50 days post calving is often quoted. If the figure is significantly less than this then it gives an early warning that things are not as they should be.

The most commonly used measure of heat detection is submission rate. This is the proportion of cows which are eligible to be bred during a 21 or 24-day period that actually are bred. On well managed farms this should be well over 70%. However, it is easily manipulated by presenting more cows for AI.

Directly measuring oestrus detection efficiency is extremely difficult; various estimates are available but all have some measure of error. They are best used when there is some concern that the accuracy of heat detection is low, such as when submission rates are high but pregnancy rates are very low. An example of a problem farm is shown in Figure 2 B. 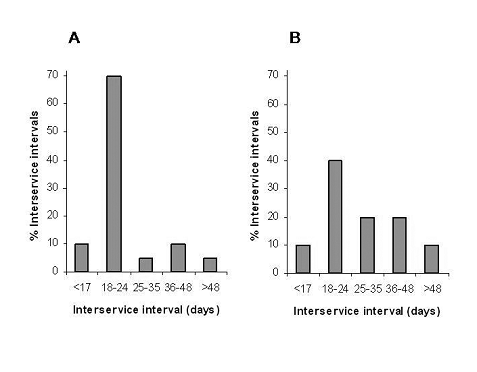 Figure 2: Recording inter-service interval can show when heats are being missed. Herd A is the expected figure with good heat detection; in Herd B a large proportion of heats are being wrongly recorded or missed

Other measures of fertility have been developed such as the fertility factor, FERTEX score and fertility index. These all aim to include as much information as is reasonable to produce a single figure which can give an overall picture of fertility. A good example of such an index is the In-calf rate, which originated in Australia, but is now used quite widely in the UK, particularly in Northern Ireland. For non-seasonal herds the usual measure quoted is the 100-day in-calf rate. This is the proportion of cows intended for rebreeding that are back in calf again within 100 days of calving. This is superficially similar to the CCI, but it includes cows that are culled and the influence of breeding policy is not so marked. In seasonal herds, the six week in calf rate, the percentage of cows that are pregnant within six weeks of the start of the breeding season, is a better figure as this takes into account calving pattern which is important in seasonal herds.

Need to drill down further if problems are identified

Average 100-day in-calf rates are around 50%, but figures of >65% are achievable. Six-week in calf rates average around 60% but 70% is feasible on well-managed farms

Recording and analysis of those records is essential if fertility is to be improved. A range of measures of fertility are available for assessing how good reproductive management is on the farm. Work with your vet to identify the crucial measures on your farm. On-farm benchmarking against previous years and other local farms allows you to identify a problem, develop solutions, implement them, and, most importantly, assess the impact of your changes. 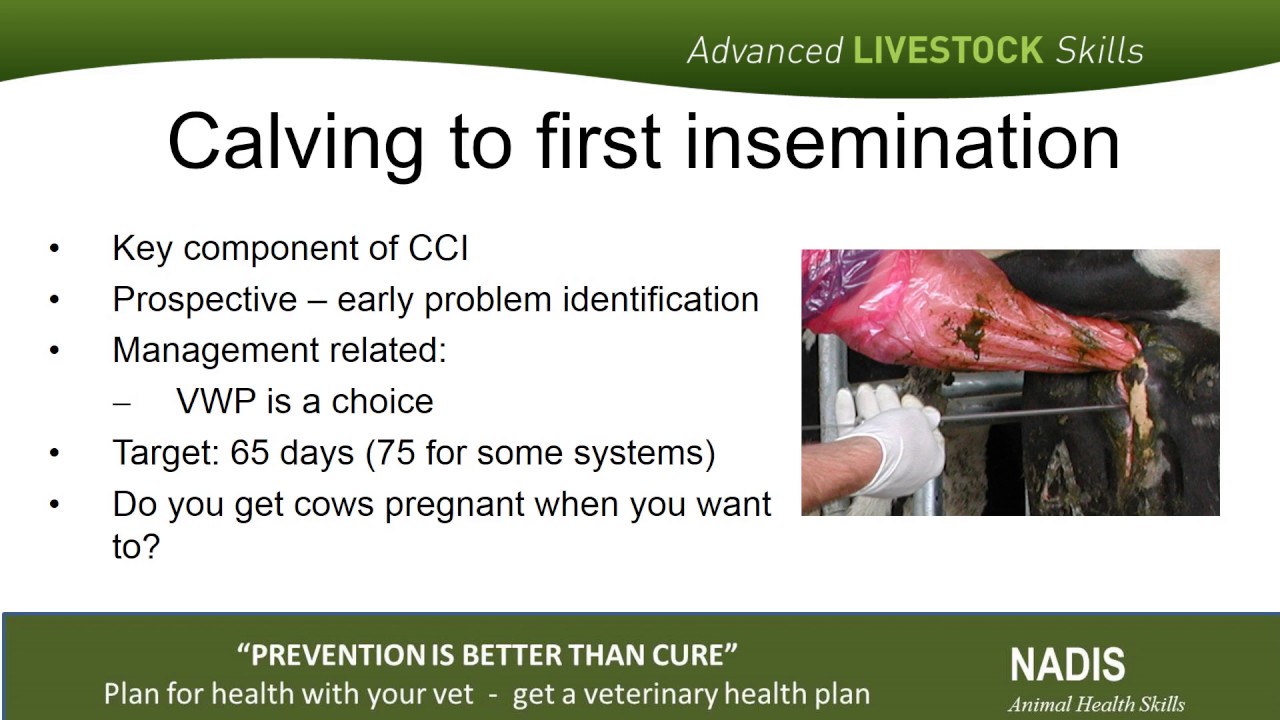